The best way to spend this Saturday 25th June, I promise! 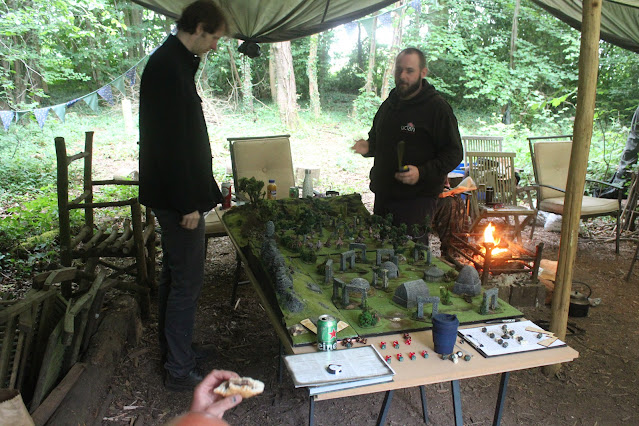 A big canopy and a blazing fire... 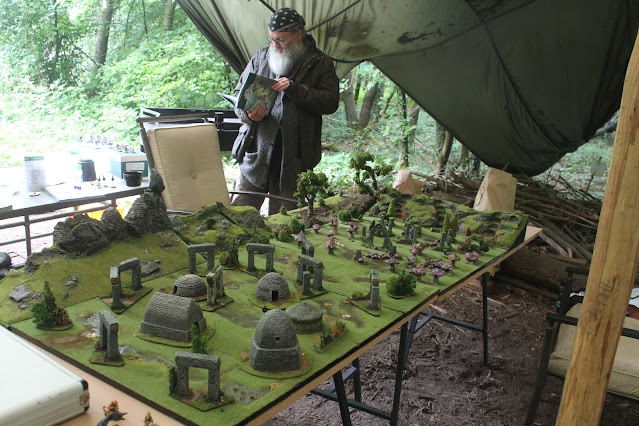 ...deep in the Gloucestershire woodland... 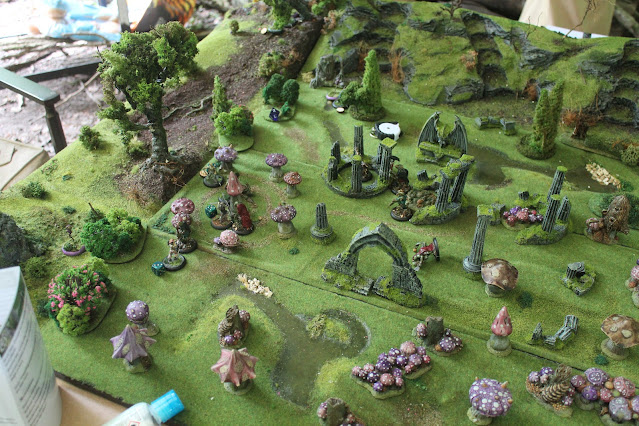 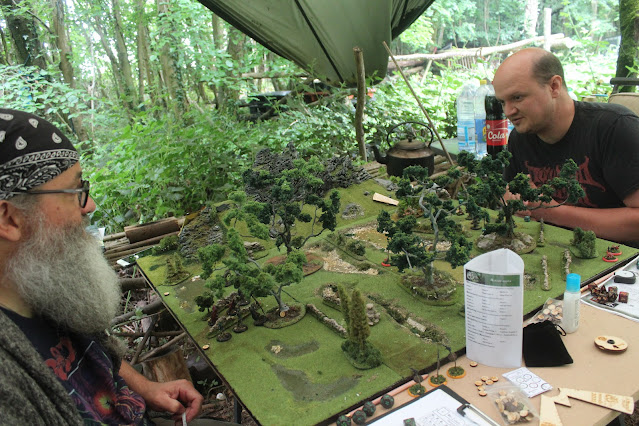 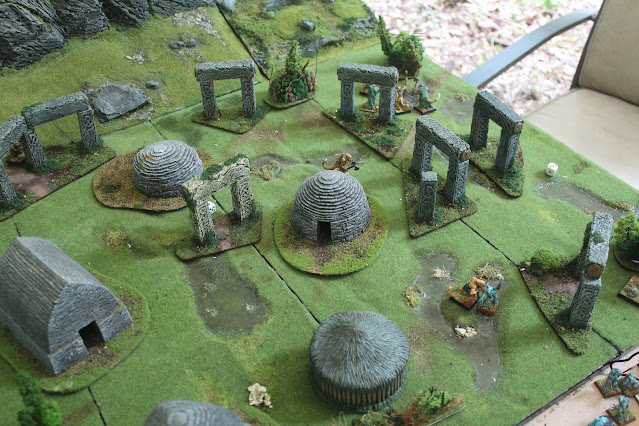 ...on beautiful tables!
Sound like fun?
It is.
You should join us!
This Saturday 25th June, Wild Woodlands Celebrations near Nailsworth.
We'll have extra miniatures, warbands lists, rulebooks, dice, templates etc. You don't need to bring anything (but of course you are welcome to), I'll even lay on a barbeque!
No need to know how to play, it's quick to learn.
Please do join us, it will be fun. :)
https://www.oakbound.co.uk/gamesday/

The best way to spend this Saturday 25th June, I promise!

The Sorcerer and the Shaman

Here are a couple more pieces for the Heroquest collection. Pending one of the extremely elusive 'regular' HQ monster prototypes becoming obtainable that's probably it for the set.

The village people reunion wasn't going well... I do want to do a full YMCA lineup of sorcerers sometime.  The new chap here is the guy on the right hand side who joins my 'metal proxies from commercially available lines'. He's Arkon Stormrider from the Champions of Chaos speciality set but without his head. I had a head from the fan sculpt female Chaos Sorcerer model that came out a few years ago intending to use it for him, but didn't realise how tiny it was! Not wanting to make him look like Thrud I carved the top section of the helmet off and used a handy Ral Partha Europe skull and some green stuff to make a better sized head for him. He got the Skeletor colour scheme rather than the flaming one. 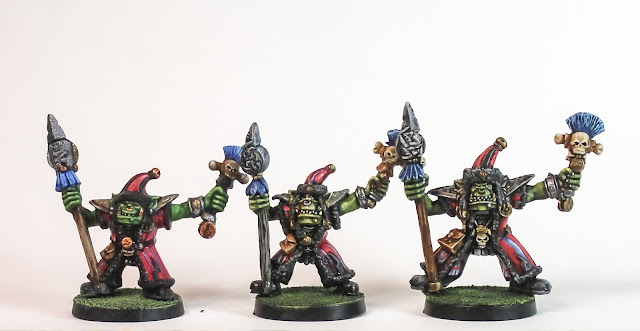 Added to the plastic and my tribute sculpt Grawshaks is the metal prototype (far right). He's certainly a big chappie! Fun to paint though, that really is the most grinning orc face of the lot.

The Sorcerer and the Shaman

The Gargoyle, more ferocious than ever!

So it is said in the 'Paint your wagon, er, orc!' article in the Heroquest Marvel Winter special below a picture of Mike McVey's stunning metal prototype gargoyle miniature. Here is the very thing itself in the Foundry cabinets. 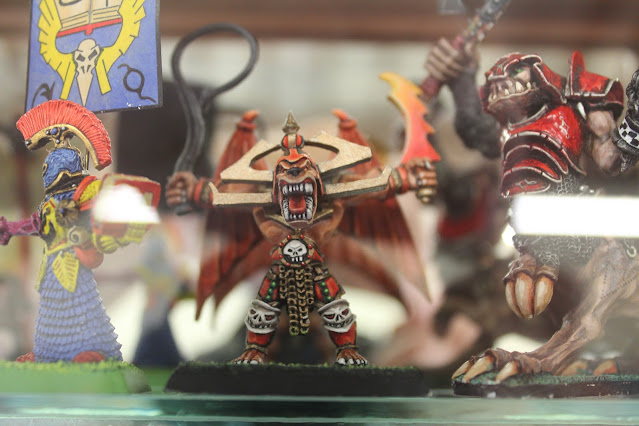 This weekend I got a nice lot of painting done, including a new crown jewel for my collection, my very own metal prototype gargoyle. 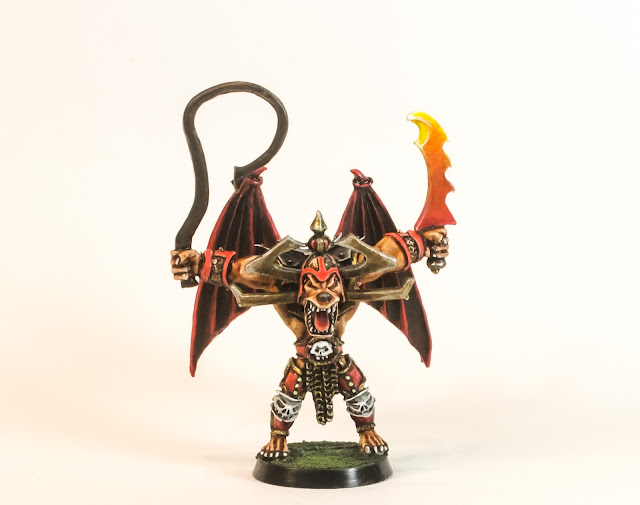 For some reason he was extremely hard to photograph and it really doesn't do him justice. Happily he was a joy to paint, sometimes when you have these holy grails they can be quite disappointing to put colour on but this chap really painted himself.

Here he is with some mates, a genuine Bloodthirster and my (somewhat oversized it turns out!) attempt at sculpting one in the middle. All good practice for the eventual original miniature. 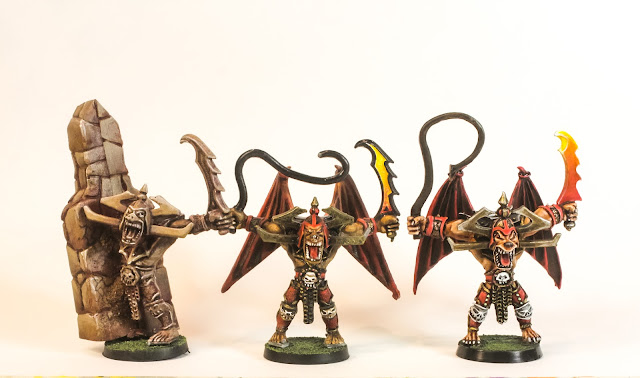 And here he is with his plastic counterparts.

The Gargoyle, more ferocious than ever!

You may remember a while ago I was painting up Advanced Heroquest Prototypes. Thanks to some generous folk they were mostly acquired as gifts, swaps and at generously low prices. The only one I didn't have was the Skaven, along with the elf the rarest of the set. Thus when I was able to buy said model for a large but not ridiculous amount I decided it was worth it to complete the lineup and balanced out amongst the others still meant a bargain for the entire prototypes collection. Here is my first ratman acquisition painted up. He's a bit shiny, hasn't had his matt varnish yet. I also haven't done the sand fill-in between his paws on the base. 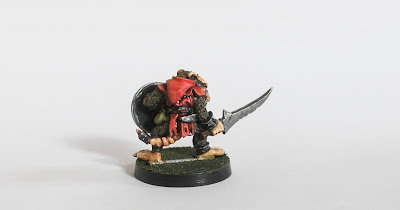 He is bolder than the rats in my Skaven army. My goal was to go some way towards imitating the image below which I first saw in the Marvel Heroquest Special, I don't know if it was published anywhere else. The printing is grainy even by the standards of the photography of the era. I guess Marvel's coarse comic paper isn't ideally suited to printing of little photos, a little like newsprint. You can just make out from the photo that this is a mix of the plastic and metal Skaven and henchmen, though as far as I can tell the only plastic Skaven is the one front and centre. There are several plastic henchmen in the other side, I guess to vary the weapons a bit.

The same models (plus as far as I can make out some extras) appear in the full page advert for AHQ as featured in White Dwarf. I have been using this to try and pair up the figures and see what the paintjobs actually look like. 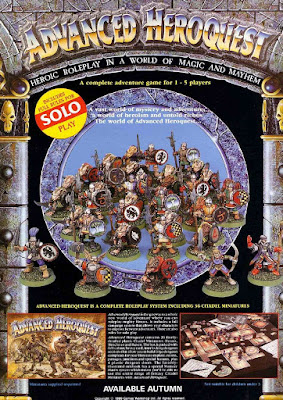 Then there are the actual models from these images in the cabinets at Foundry. I looked through my own photos and whilst I had taken many of the Heroquest and AHQ Heroes I didn't have any good ones of the Skaven or Henchmen. Idiot. Thankfully Ian Stuart did take some good photos of them and sent me the image below. As you can see they're a lot less yellow than the Marvel publication makes them look and more vibrant than the WD advert. I went for the guy on the right in the fetching red attire for my first Skaven. This is pretty simple block colours, no particular patterning except for the marks on the face. The hoods on these guys are definitely good territory for chequerboarding, diamonds and stripes. I can see a few of these in the various photos. Also that shield is harder than it looks, getting the three-pronged-swastika central and evenly spaced is tricky! 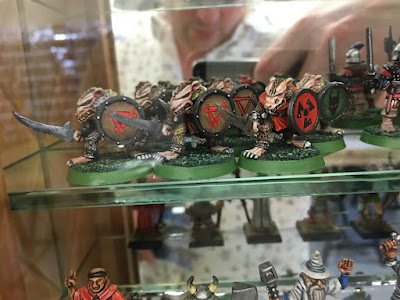 My first Skaven? Well, yes. Since I mentioned that I was looking I had contact with a nice gentleman who might be able to help me get a bit closer to recreating that childhood image... There might be a few more painted Skaven coming up along with some henchmen counterparts.
I might stop short of doing the Warlock of Firetop Mountain heroes that can be seen on the shelf below the Skaven in Ian's photo. Much as I love that game (my copy got lost in a move, boo) the figures are not a wonderful example of GW from that era!