I was fortunate enough to get my hands on just the rulebook from the new Underhive box for a reasonable price and this weekend I finally got some time to have a read through. Here are some thoughts for anyone interested in them.

First, a bit of context. Necromunda was just announced when I bought my first White Dwarf. I'd been playing fantasy battle 3rd/4th mashup with some friends and Heroquest before that but the Necromunda fluff was one of the first (and about the only sci-fi) GW backgrounds to engage my interest. Of course, I couldn't afford it then. I absorbed it through White Dwarf and pretended I was playing Necromunda when I had the occasional game of Trinity Battleground, it wasn't until much later I got my hands on a second-hand copy. Then I discovered Confrontation and although I have never played it there was more expansive background to absorb and a wealth of complexity that was absent in the 40k skirmish game that actually got released. It was this that set me on the course of creating my own dystopian future skirmish game with a view to having much more roleplay elements and flexibility than the move-and-shoot that was Necromunda, but definitely influenced by the feel, multi-level action, character and gang development of that world. It was therefore deeply ironic that GW should announce a re-release of Necromunda just as my own game was ready to go to print... To be expected of course, GW have always seemed to be looking inside my head but that's something for another time.

So Newcromunda has emerged to mixed reception. Since I have absolutely zero interest in the new plastic models, card tiles and custom dice I will only write about the bit I have in my hands, the rulebook. It's about the same size as the original, has a nice matt cover and coloured pages with pretty textures. I note that it was printed in China, but I suppose that's only to be expected. The artwork throughout is a mix of modern 40Kish digital colour and some black and white images which are reminiscent of the Mark Gibbons artwork from the first release but have been given the steroid treatment to bring them in line with the modern miniatures.

The book opens with about 30 pages of background to the Necromunda world. It's well-developed as you'd expect from a game with 27 years behind it and is a blend of Confrontation and later Necromunda with lots of hints that will make Confrontation fans excited (Brat gangs on jetbikes and Genestealer cult activity- although no Caryatids sadly). I don't think there's anything substantial which is new, but there is a lot more depth than the original rulebook/sourcebook, particularly with regard to the interplay between the Clan Houses. Given the plan for the release of the Gang War supplements this background-rich presentation seems like something we can expect more of, which is a good thing as far as I am concerned.

Having mentioned Gang War it's worth touching on the release schedule for this. Now I understand the need for a company to keep people buying its products. I understand not releasing everything at once. But one of the joys of Necromunda was that you had everything in one book (well, two in first edition but at least in the same box, without Outlanders of course). The Necromunda: Underhive box gives you Goliath and Escher gangs with limited gang creation options and no development or campaign stuff. For that you have to get Gang War (which is actually not too expensive compared to previous GW releases) and even then you only get campaign stuff for Goliath and Escher. Now I haven't bought Gang War, I've only flicked through it, so I'm not best placed to give an analysis of it. However, it seems that the campaign/development is now individually tailored to each gang. This is great for depth and character of the houses but less good in two respects- Firstly it means that a campaign starting now will probably only feature two houses. Yes, the 'legacy rules' are on the Necromunda website, but anyone using them will probably feel they're at a disadvantage until their 'proper' release in Gang War. It could be a year before there are any campaigns worth joining. Secondly, and more importantly to my mind, it makes it much harder to create your own gang types. If you didn't want to stick rigidly to the background of Necromunda in first edition you could break out very easily by picking appropriate skills tables for the kind of gang you wanted. That's not so easy if you have gang-specific advancement. As I say, I don't have Gang War, so that's just my impressions from a flick through, I could be wrong.

Probably time we looked at the actual rules in Underhive. There's been a lot of debate over whether the changes are good or bad or even whether the game is still Necromunda. Well, here's my two-penny worth. This is a game which is still largely about moving around, sometimes grabbing stuff but largely shooting and engaging opponents in close combat. It's still a fight-focused gang game with facing and equipment important. There are no rules for '3d' terrain in the rulebook, which seems silly to me as it's not exactly a lot to put in (I think it's 5 pages in Gang War?) and platforms, gantries, ladders etc. add so much to the game. Maybe a beginner would find it easier to play without levels, but players managed back in 1995! A starter scenario (there is one anyhow) with no levels would have been a better way to go than ignoring them completely. What else has changed? Activation is now one model at a time, with the chance to activate multiple models that are close to leaders and champions (the new specialist rank which has replaced heavies). This is a much-needed change to modernise the ruleset, but I suspect that many campaigns had already adopted something similar, it's not a radical new idea. Close combat is now a WS check rather than a roll on a table and the streamlined rolling to wound from the latest 40K is there as you would expect. You still roll to see what happens to a downed fighter. Some comment has been made about the single and double action system which dictates how much you can do in a turn. In essence this is how it always has been, you can move and shoot, run (two moves) etc. but now by classifying something as a single or double action you have more flexibility to incorporate other actions (opening doors etc.). This is pretty much what every Necromunda campaign I've been involved in has done anyway, it's just written down slightly differently. The inclusion of Willpower, Cool and Intelligence stats from Rogue Trader and earlier editions of WFB offers another possibility for doing more interesting things than just running around and shooting stuff. This is a game it would be possible to include quite a nice degree of RPG into, but one which is still very much a wargame. The scenarios at the back of the book are pretty much what you'd expect from a 'stock' list of game types.

In conclusion- is it Necromunda? Yes I think so, with a dash of Confrontation thrown in for good measure. Have the changes been positive? Without playing, yes it looks that way. It takes in essence the same system and makes a few tweaks to bring it in line with more modern skirmish games like Inifinity and Malifaux. Nothing that a group couldn't have house-ruled in but pretty reasonable adjustments. Will it inspire me to go and join a local campaign? No. Having been playing a system with a good weight of RPG, lots of strategy and mechanics that don't rely on a ton of dice rolls I don't feel drawn to play this game. It suffers from the over-reliance on dice that most GW games have and that really bores me. When I knew no better it was mildly amusing to have gameplay dictated by little dotted cubes but having played several games with more innovative mechanics I now find this system pretty tired. The background still grabs me and I will still enjoy modelling projects based on it but I'm going to stick with other rulesets.

Campaigning in the wastes

The Factious Waste live campaign is now, um, live! With seven gangs currently battling one another over the spoils of 1984 region.

Now I have to remember to post the battle reports (like this one.) and prompt other gang leaders to send me their biogs and batreps. 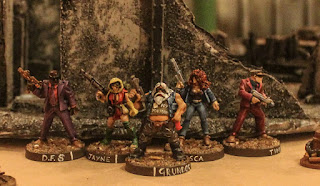 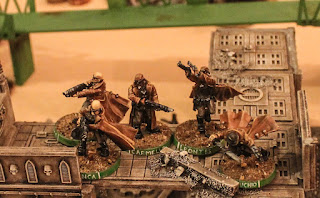 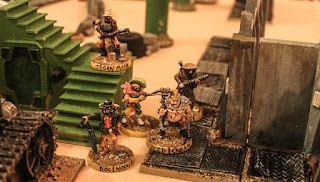 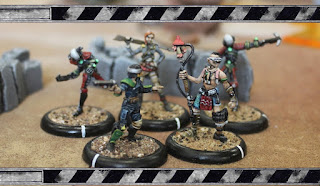 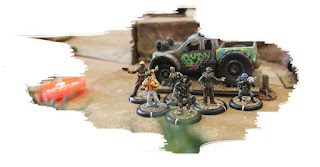 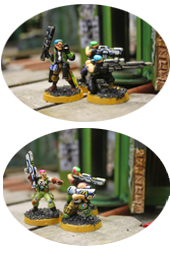 Campaigning in the wastes