Red October... Red Weed that is!


Well folks, it's October and that means there's only 31 days left to pre-order your copy of Tripods! the War of the Worlds board game with all its Victorian Martian invasion goodness. Here's a little video to whet your appetite and show you what your £35 gets you, besides hours of family-friendly fun for the winter!

Please excuse the fuzziness, my camera doesn't do video well. The graphics are nice and sharp I assure you! If you'd like the full, annotated version of the play-through visit our facebook page here.

Red October... Red Weed that is!

Email ThisBlogThis!Share to TwitterShare to FacebookShare to Pinterest
Labels: board games, gaming, tripods!, War of the worlds

You can now follow everyone's favourite Martian invasion at

Tripods! the board game

featuring an unboxing, video run-through and detailed photo album guide to playing. The video is reproduced below:

Email ThisBlogThis!Share to TwitterShare to FacebookShare to Pinterest
Labels: board games, tripods!, War of the worlds

The Comet Has Landed! TRIPODS! has launched!

Tripods! the board game of Martian Invasion in Victorian London is available to buy RIGHT NOW at the game crafter

Of course, if you're not in States shipping's quite pricey right now- so we're trying for a European production run which you can support by pre-ordering your copy now at www.indiegogo.com/projects/tripods-the-board-game and spread the word, we need to sell 400 copies to fund the print run! If you want to take the quantity up with anyone, most of that is tax for the UK government! 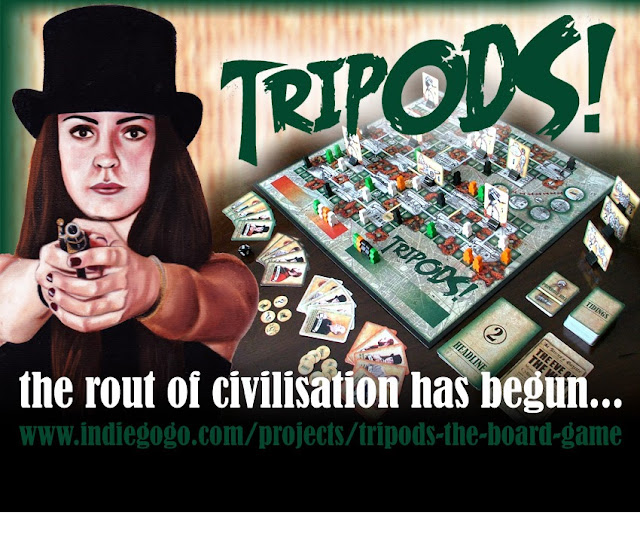 Tripods! will be available to play at the Asylum Steampunk Festival in Lincoln this weekend (website), you'll find us in the Duke William on Bailgate from 11-4 and, even better, you don't need to be a Steampunk or have a ticket to get in! Just come say hello. We'll also be at Bristolcon on the 26th October and are open to invites to any other events you may care to have!
The campaign closes on the 31st October, but don't give us a Halloween trick by waiting until then! If we clear the target early there'll be reward perks available such as some juicy metal Tripod minis which will be strictly for campaign backers only!
﻿

The Comet Has Landed! TRIPODS! has launched!

Email ThisBlogThis!Share to TwitterShare to FacebookShare to Pinterest
Labels: board games, tripods!, War of the worlds

TRIPODS! The Invasion of the US has begun!

That's right folks, you lucky people in the US can now purchase a copy of Tripods! The War of the Worlds board game by visiting

Of course, if you're elsewhere in the world you can buy from there too, but the postage is quite pricey. An Indiegogo campaign for a UK/European launch will be starting very, very soon. Keep posted for updates, or email Geoff@propworkshop.co.uk to be added to the mailing list. 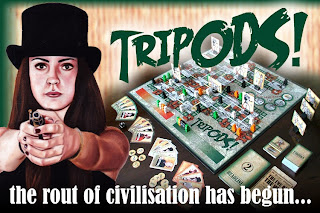 TRIPODS! The Invasion of the US has begun!