September has been "Paint A Bob" month on the Oldhammer Community Facebook page, or, as I like to call it "Bob-A-Job Month" (non-UK followers, this was a term used by Boy Scouts who used to have a "bob-a-job week" where they would do odd jobs for people and be paid £1 (1 bob) per job. I think inflation may have changed that now!). This is the second in a series of contests painting a model by a particular sculptor and then having the competition judged by the sculptor in question. The last one was "Make a Trish", this time it was the turn of Mr Bob Olley, undoubtedly the Marmite of the miniature sculpting world!

Look at this meanie, he's gonna mess you up.
It's hard not to spot a Bob Olley sculpt; the big head, the wealth of texture, the deviation from 'canon'... Bob certainly produces some unique creations.  I will confess I was not a fan of them, until I painted one. I have a general rule for what qualifies a good sculpt, one which I try to go by when pushing putty. That is: if you can't produce a decent tabletop-level result with a combination of base coat, wash and drybrush it is not a good gaming model. Anything with too many flat surfaces that requires expert-level blending and freehand work is fine for those painting at display level, but unless you are a master it will look terrible on the table.

Bob's black orcs. I used to have a couple of these guys but I didn't like them and gave them away. What a fool I was!﻿
Start painting a Bob and it will be clear he has a similar policy.
These are perfect sculpts for the pre-airbrush era where artists' inks are king. Put a drop of ink on a Bob Olley sculpt and all manner of strange and wonderful details will start to appear. Stuff you'd never notice from a catalogue page or bare metal miniatures is suddenly brought to vivid life. Put simply, to an average painter Bob Olley sculpts are pure gold, they'll make you look like a master with so little effort! I'm sure an amazing painter would bring our further magic from all those intricate bits. 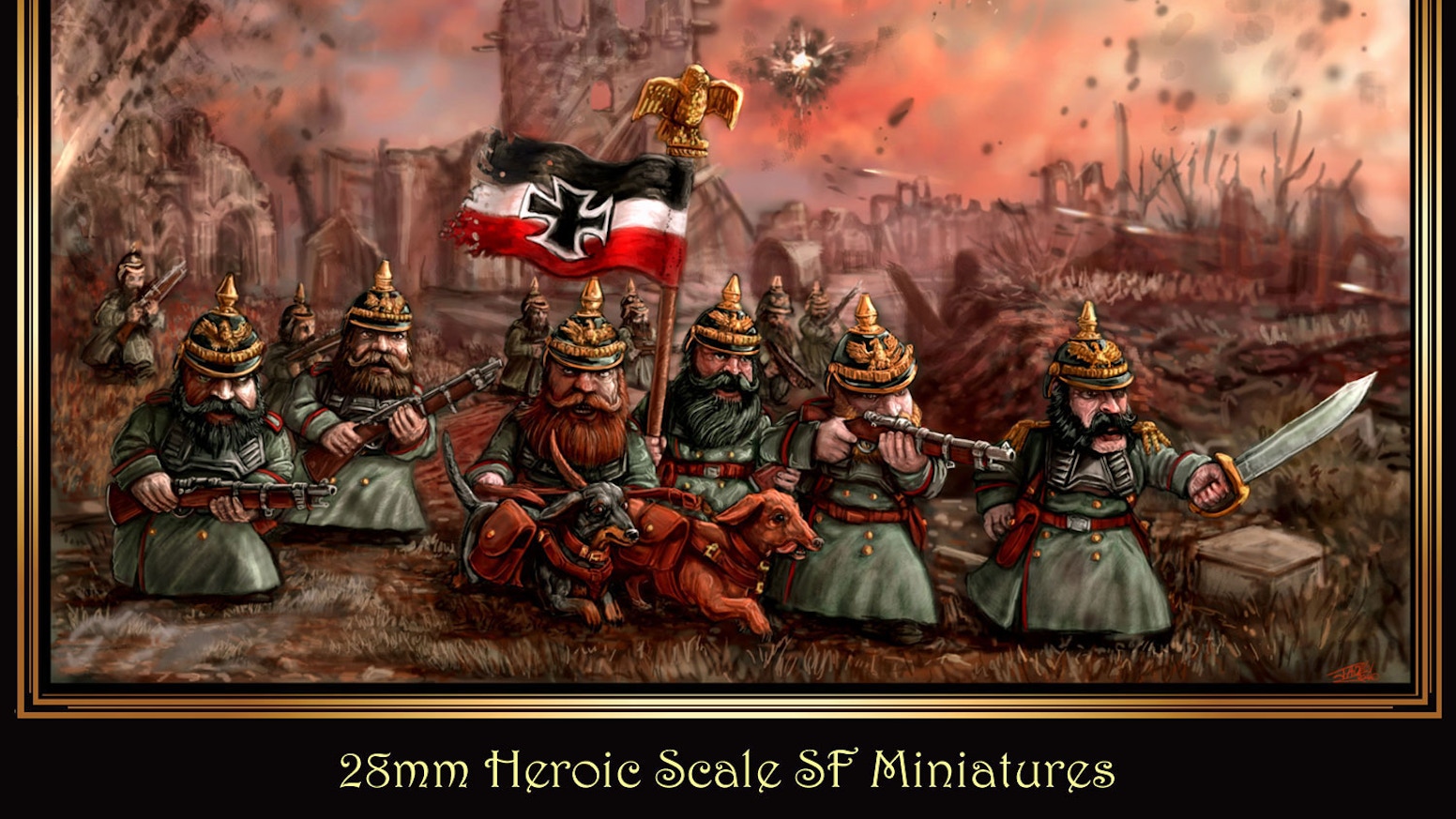 Olley's Armies Scrunts- the biggest dwarves you will ever own!
A couple of years back I picked up a bunch of Essex undead cavalry for Bob's superb horses (that's another thing Bob does brilliantly- animals. Just look at his wonderful ork kangaroo!). Unfortunately the skeletons are one of the things I still can't bring myself to love, their big heads just don't fit with anything else I have in my undead army, but the horses are magic (and I'm pleased to see they now sell them separately). At the same time I picked up some gnarled old wizards and my first Bob-a-job entry is one of these. 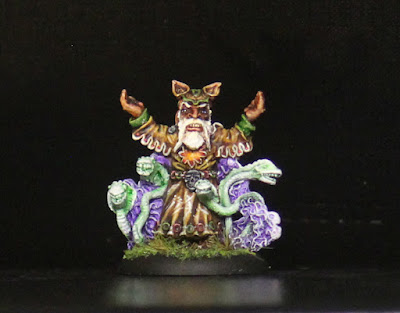 His robe made me think Plains Indian so I've tried to up the shamanic elements as he summons his snakey servants. As someone who is petrified of snakes I was grateful for Bob's cartoony take on the blighters. I have a Tim Prow snakemen on my shelf which still makes me shudder if I forget it's there and catch sight of it. Just look at the expression in the face, the fierce eyebrows, the flared nostrils, the bad teeth! None of that is me, that is all Bob.
Because of the classic look of the mini and theme I decided to try and emulate a 'Heroes for Wargames' kinda look to the photo. Nice soft focus (not entirely deliberate).
﻿ 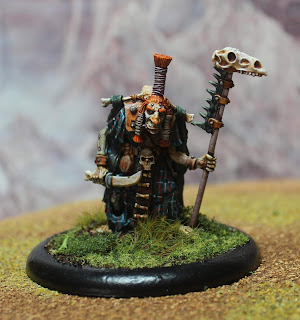 My second entry is a more recent sculpt. A Bob Olley ogre from Ral Partha Europe. I picked up a dozen of these ogres a few years ago (see blog post) and really wanted this shaman to go with them. Unfortunately I had not recorded what paints and inks I used to do the tartan robes, so had to guess. I now keep records of the pallet used in any group I might want to add to later on! Fortunately I think I guessed right, or close enough that he works nicely with them.

So if you're a fan of a Bob sculpt I hope you enjoy these efforts. And if you aren't a fan of Marmite, um, Bob, perhaps try painting one? They're dead cheap from Essex and RPE. You might find you like it, or you might find you don't. 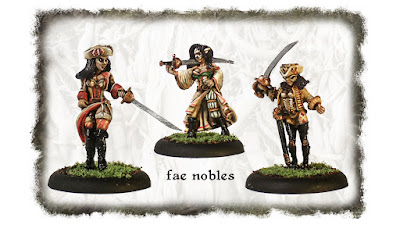 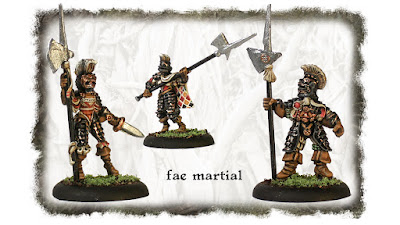 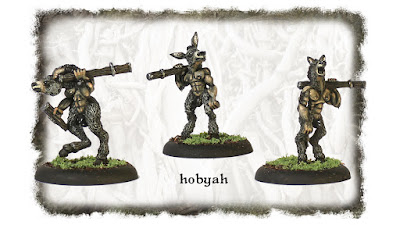 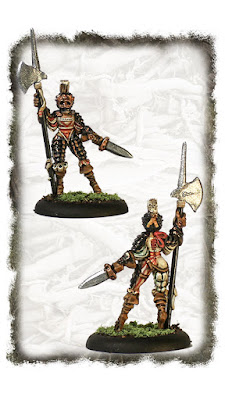 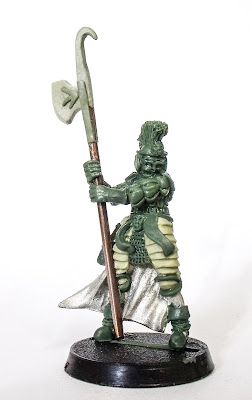 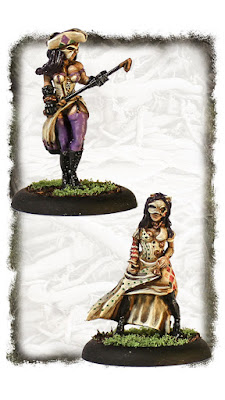 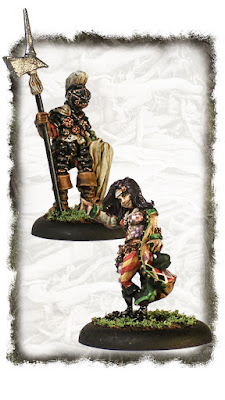