Just think, it took two years to accumulate 10,000 views, and now four months to add another 5,000... must be doing something right. Sadly no epic battlescene for this one, just a little self-indulgent pat on the back and off to bed.

The first Snotling unit is complete! These guys were my task for the October painting challenge on the Oldhammer forum so it felt fitting to give them a bit of a Halloween theme, hence the pumpkins. So here they are, Black Ernie MacSchmuck and the Creeplings: 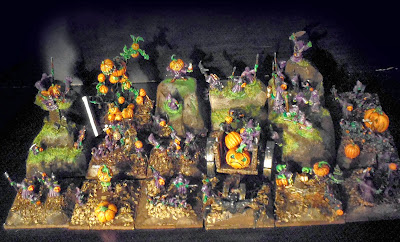 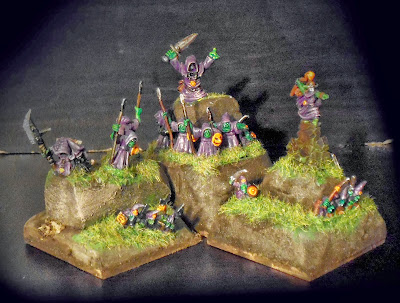 Black Ernie (centre) and his champions 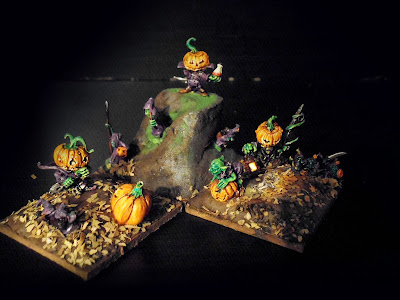 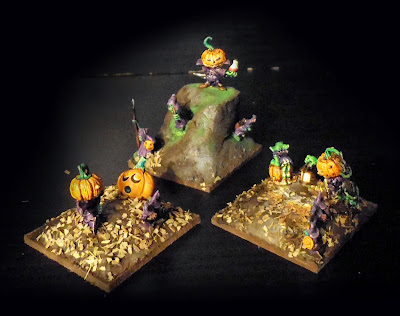 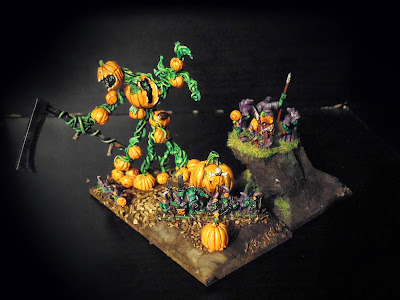 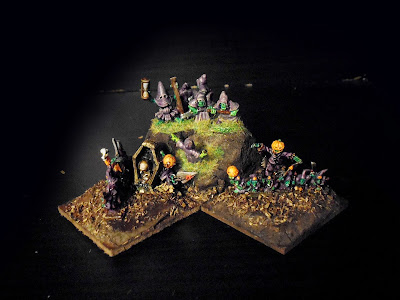 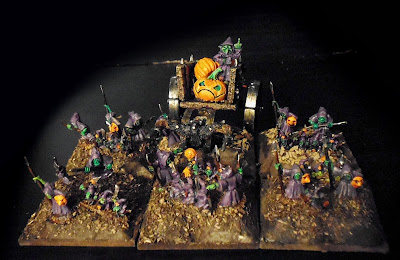 Deep though the caves inhabited by most Snotling tribes are, there are caverns deeper and darker still; fissures and grottos where the no breezes blow, the air is hot and stagnant and many of the passages are little more than half-flooded crevices. Even here there is life for it is in these dank recesses in the bowels of the earth that the Creeplings dwell. They are small even by Snotling standards, barely a foot high in most cases, and have an unnerving quality to them which makes anyone who encounters them shudder involuntarily and gives them their name. For those who know more about them the shudder may not be so involuntary, for the Creeplings have a reputation for being more wicked than their mainly benevolent larger kin, engaging in violence for sport and enjoying random acts of depravity.  Fortunately they rarely come above ground since daylight hurts their eyes. The most experience a human is likely to have is if mining or caving too near their territory, when the Creeplings will make “knocking “ sounds to lead the humans away. Some humans have found richer seams of metals this way and so speak fondly of the ‘knockers’, whilst others have found themselves lost or trapped and claim they have been tricked by evil mine spirits.
Separated as they are from the bulk of Snotling-kind, the Creeplings have their own king. For as long as any of them can tell this has been Black Ernie MacShmuck. By all reckonings Black Ernie is now over a thousand years old, however he is no taller than an average Snotling. Some attribute this to the Creepling’s genetic shortness, useful for creeping through tight crevices. Those who are in the inner circles of Creepling hierarchy, however, know that although their king is Black Ernie, it is not often the same Black Ernie for more than a couple of years. Intrigue and assassination are rife amongst the Creepling clan and their king goes about cowled with his face hidden and rarely speaks.
Only two types of vegetation are to be found in the caverns of the Creeplings. The first is a virulent purple fungus which the Creeplings eat and use to dye their clothes. Many Snotlings blame this mushroom for the Creeplings’ unsavoury nature since a close cousin of it grows in the higher levels of the caves and is avoided at all costs being highly poisonous, even to Snots. The other plant is a curious type of gourd which produces an eerie phosphorescent glow. This is the only form of illumination in these deep places and the pumpkins are revered by the Creeplings who say that each pumpkin is connected to one single creeper which runs into the deepest, darkest part of the world. There lies the pumpkin king, Django Lanthorn, who watches over all Creepling kind. Should the realm of the Creeplings be threatened then Django Lanthorn would stir from his sleep and rise to the surface to defend his people. It is forbidden to cut a pumpkin from the creeper, but occasionally one will fall of its own volition. This is seen as a great omen and blessing by the Creeplings and the gourds are often carved into ornate masks or carried into battle as totems to secure victory.

The figures are a mix of Citadel (Familiar, Carrion Wraith, Warmaster Night Gobbos and one actual Snotling!), Pendraken, Reaper and Rackham.﻿

Here they are then, a couple of oldschool-looking pictures of the Marsh Demons cast in lovely lead. Please excuse the blu-tac in the assembled shots- don't want to glue the masters together! 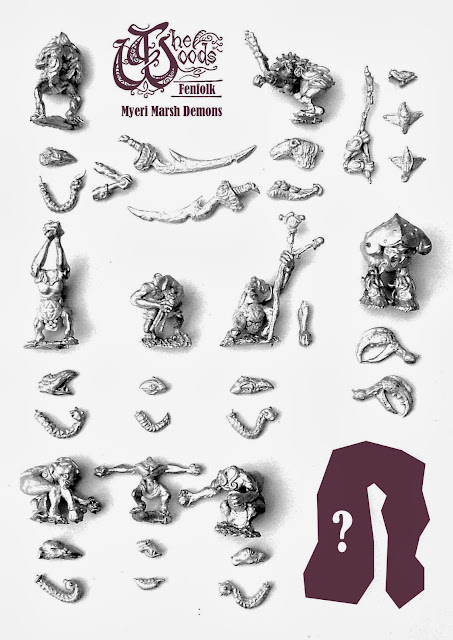 The Marsh Demons have arrived from the foundry... the guys have done an ace job, but no pics just yet. Instead, here's a C-series-style catalogue page I knocked up in some free time this afternoon, just as a teaser! 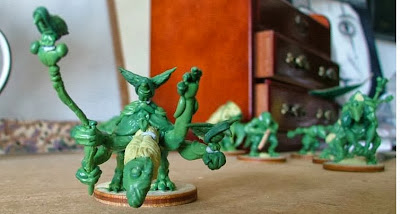 The news reached me yesterday that my moulds are ready. The master casts of Clan Myeri sculpts are done and the figures are ready for production. There are 10 of these in all, 8 Marsh Demons, a Woldlouse and a mystery figure which will be revealed in good time. Eventually these will go on general sale along with a board and roleplay game which is being tested at the moment. The rules will be freely available in the new year for playtesting and a forum will be set up to discuss ideas, development and gameplay. In the meantime, though, the Myeri Marsh Demons are available solely to Oldhammer Forum users so if you want some you'll have to hop over and sign up!