We had a great day yesterday doing the 'official' Factious Waste launch at Blast-tastic. We had a 3'x3' (standard FW size) setup for the game complete with Fogou Models' barricades and scrap piles and our own junk counters.
﻿ 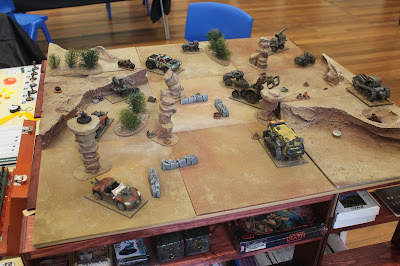 A freak sandstorm had uncovered a junkyard of abandoned vehicles and scattered garbage, well-preserved by the sands that had covered them. Some of the vehicles even had gas in their tanks... 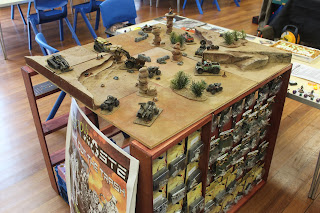 With the simple 3-step posse creation I put together two gangs from the painted prototypes, put their stats onto the handy reference cards (part of the PDF bundle for kickstarter backers) and they were ready to go hunting. 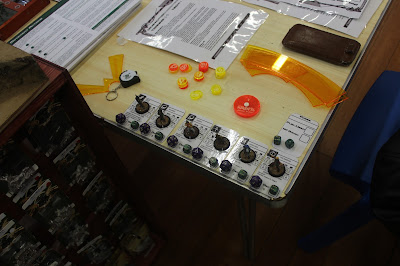 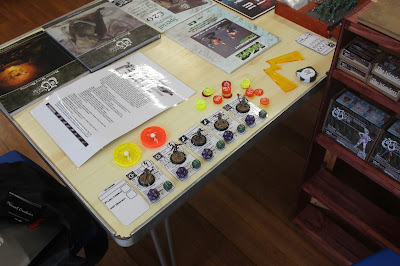 All the greens came out on display. After weeks of looking at the photos, getting them ready for the campaign, it was nice to get the actual sculpts out again and be reminded how small and finely-detailed they actually are! One of these days I need to sort out taking good photos of green sculpts. Even with advice from a pro I haven't quite got it right yet, they always look a bit lumpy and weird in pictures. 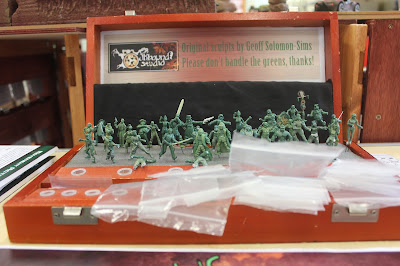 And there was cake to celebrate! I ate soooooo much cake.... 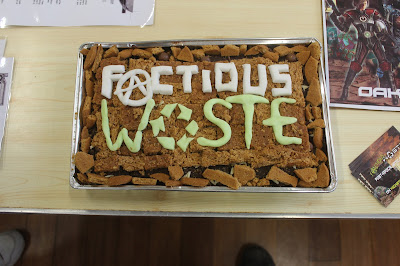 Game 1 begins, with gangers grabbing the little, nearby scrap piles but eyeing up the real prizes in the centre of the board. Who would make the first move? 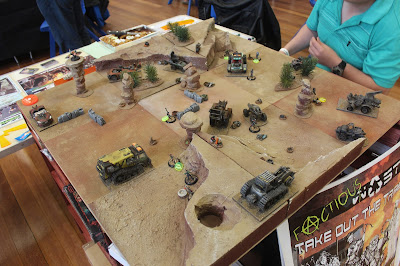 Pressed Squad 6A (the remains of a GenCorps field squad, their NeoPrimitive guide and two Trash Runner mercenaries) splits into two. The trained operatives heading left into the canyon and the rest moving towards a high vantage point to bring their firearms to bear on the opposition. The Lawful Free, a Trash Runner-lead posse with a rogue Doughnutter, Luddite, Artisan and pair of ReFrat agents, advanced en-masse into the valley. 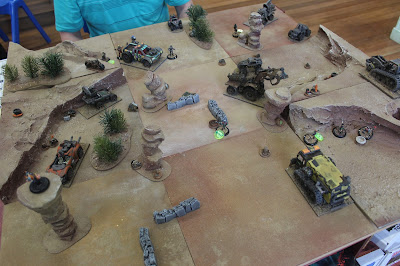 Ducking between two wrecks the GenCorps operatives take down Big Mikey, the ReFrat agent, before he can strafe them with his Tom-E Gun. They kicked their shields into action and prepared to get up close and personal with the enemy. 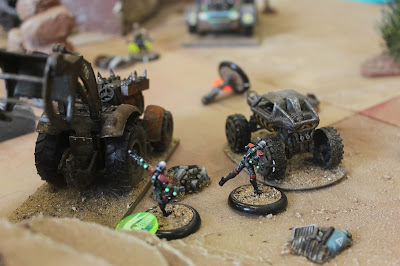 Panting from the effort, the Doughnutter enforcer had reached the summit of the cliff opposite and prepared to bring his Lawhammer to bear on anything which moved in the clear space below. 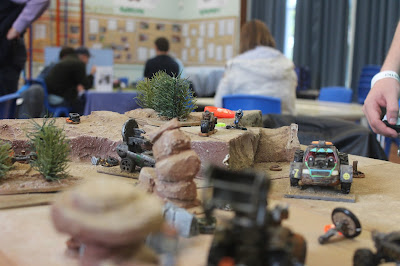 Alpha, the leader of the GenCorps, made a dash to finish off the ReFrat agent, but had reckoned without the stealthy crossbow shots of the Trash Runner lurking behind the rock formations. The bolt penetrated the low energy shields of the tactical suit and she hit the ground hard. Upright again thanks to the assistance of the nearby Artisan, Big Mikey turned his Tom-E Gun on the other GenCorps operative but Beta spotted the barrel swing in his direction and dived behind the nearby buggy. 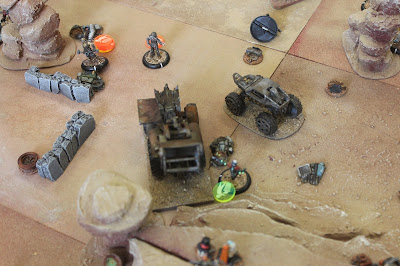 Maxwell, the shotgun-toting Trash Runner, charged down from the cliff towards his stricken leader. With both barrels he sank Gideon, the yellow puffer-jacket of the Frat Brat making him an obvious target despite his attempts to cower behind the rock pillar. 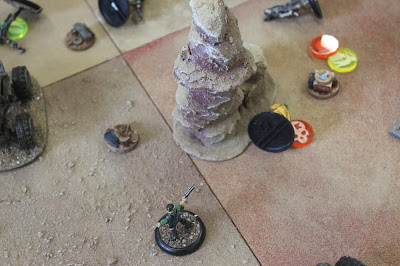 Beta charged towards the fallen Alpha, hoping to get close enough to help her recover. Yates, the Trash Runner leader, pulled off a second crossbow shot and dropped the other GenCorps officer. Up on the clifftop Tranter readied her rifle and snapped off a shot at the leader of the Lawful Free. She was well out of range, but the unexpected shot caused most of the standing members of both parties to throw themselves to the ground. 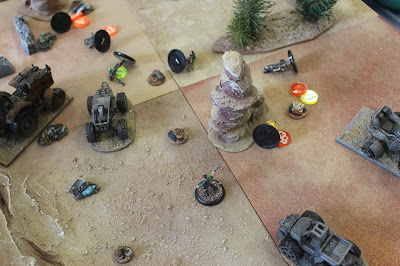 Having so far avoided danger, The Shadow (Luddite revolutionary) made a bee-line for the biggest pile of scrap he could see. Meanwhile Alpha staggered to her feet and shouted to Maxwell to bring down Big Mikey. The Trash Runner turned, slotting two more cartridges into his shotgun, and snapped off a shot, bringing the ReFrat Agent to the ground. 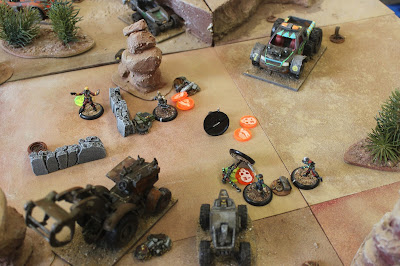 Seeing the second barrel swing towards him, the Artisan dashed after the figure of The Shadow as it disappeared behind a barricade. 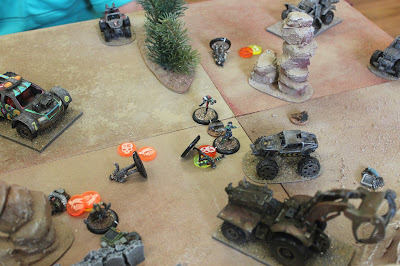 Up on the hillside James Sully the priest of Consomar watched the battle. As the carrier of the only medi-kits in the posse he was badly needed to revive Beta, yet still he hesitated, was the GenCorps officer worth risking his life for? Alpha nursed her wounds and barked more orders at Maxwell. The Shadow fell to a shotgun shell and the Artisan threw himself to cover behind the barricade. 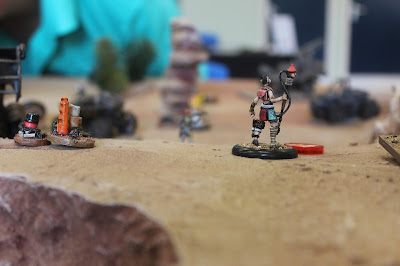 A shot dropped Maxwell to the floor. Alpha swung away from the centre of the board in time to see Yates and Gideon get to their feet. Sensing the charge of her Ohmic Tactical Suit running low she signalled the retreat. She dashed towards Yates and James Sully who were already making their way back over the outcrop to safety. 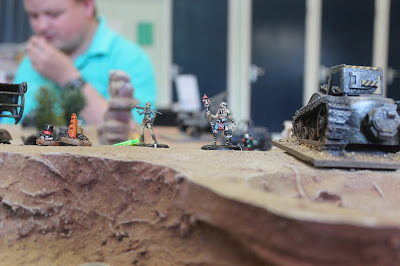 The Lawful Free were left to claim the rich pickings of scrap, but at what cost? Big Mikey, The Shadow and Gideon were all out of action and with no medic in the posse sure to sustain injuries. Pressed Squad 6A had suffered badly too. Maxwell and Beta were both out of action. Fortunately The Lawful Free were too concerned with their own wounds to take any captives this time so the pair would be able to crawl to safety whilst their enemies rummaged through the junk for valuable scrap. 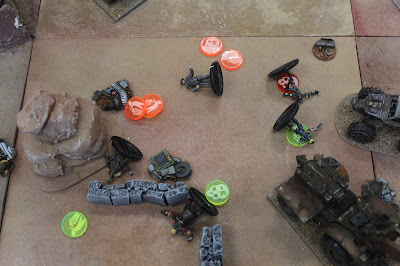 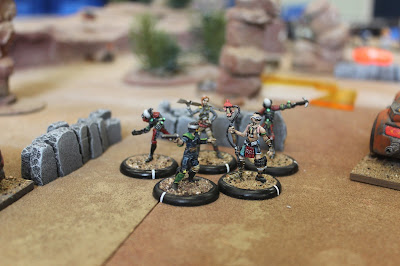 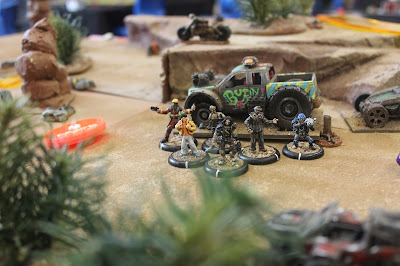 Just time for a fun moment from the second game- never let a NeoPrimitive drive! Having discovered fuel in this beaten up roadster the priest of Consomar lined up a reverse corner to finish off an enemy Doughnutter. He squished the Doughnutter fine, but in his enthusiasm overshot and smashed straight into his Trash Runner ally, finishing off the hapless warrior. He would get his revenge in the third game, however, when a similar reverse attack on his posse landed the unfortunate driver's window level with the wrong end of the Trash Runner's shotgun...
﻿ 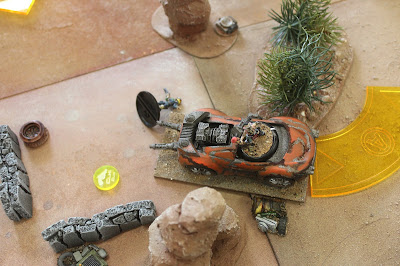