There's a new Facebook group on the scene, well there are several actually, they seem to be multiplying at a rapid pace! But the one I'm talking about is the Oldhammer Sculpting Group where established sculptors and newcomers alike can share tips, ideas and examples of their work as they create new pieces of art that fit the 'Oldhammer' vibe.

Curtis of Ramshackle Games has been leading a team of intrepid sculptors in a quest to put together a Chaos warband which is being called the "Circle of Chaos". You can find more on the Facebook page, but here's my (still WIP) submission to the project with some background story. Qikdeath Gallbroiler started as a Realm of Chaos champion of Nurgle generation- Skaven, Limb Loss (both arms), Chaos Weapon, Head of a Beast of Nurgle. 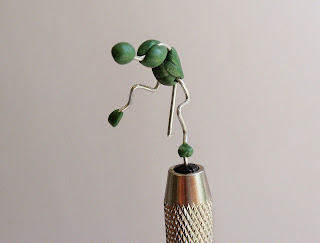 Qikdeath Gallbroiler raised its snout from the carcass of the white deer and held its nostrils to the wind. Though it was no longer Skaven the ratbeast’s nostrils were still keen and there was something in the winds today that would have quickened its heart were it still beating. The scent was not flowing in the natural wind, this was coming over the fens to the west and carried with it the usual pungent odour of marsh gas and decay. Such scents brought pleasure to Nurgle’s creations, but it was not this that excited Qikdeath. No, the scent which had stirred him from his feasting was borne on the subtler winds of Chaos, flowing down from the North, and that way he turned his muzzle.


The Gallbroiler had found the white deer here a few hours ago. The animal had been dead several days and its remaining flesh was putrid and green, satisfyingly pulpy to the spawn’s tastes. It had not failed to notice the remains of the crudely drawn circle of summoning, the chalky marks on the obsidian-black standing stones or the disturbed earth which told of a rite disturbed and a skirmish lost. Qikdeath had been tracking a motley band of travellers over the last month after they had passed by his hole. Normally it left well-equipped warrior-types alone, but in this instance there was something drawing it out of its lair and after the strange party. Something in the winds of Chaos. Something it smelt again now. The green-clad travellers with the white arrow mark on their shields and cloaks had continued southwards into the marshes at great speed and Qikdeath had lost sight of them as it struggled to keep up. At least one of the travellers was riding a horse, one other was mounted on a giant dog, another on a bear and another was a centaur. Together with a forbiddingly large giant they were covering open ground swiftly and the spawn was loathe to follow too closely for fear of being seen so it kept to the scrubby woodland, forcing it to detour and struggle to keep up. It had been a week since the Gallbroiler’s four eyes had caught a glimpse of the warband but the remnants of the site at which he was now gorging on deerflesh told him he was still on the right track.


Scanning the winds of Chaos for some sign, some message, the spawn suddenly found a firm conviction growing in the remnants of its simple mind. There was no need to follow the band further, not yet. The ritual had not been completely in vain. The cultists’ work was not entirely unfinished. Qikdeath would wait here. Others were coming, others drawn by the same wind, others with greater patronage and understanding. Once more the Gallbroiler would not be alone, it would fight once more for the infernal powers. Maybe in time it would be raised to higher things. The ratbeast turned its eyestalks to the broken and scuffed summoning circle on the ground. When the others came the markings would be restored, the Circle of Chaos would be completed.