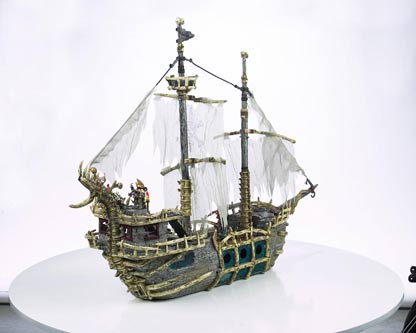 Here’s the second of my ships for Bring Out Your Lead 2015. She was the first ship I bought for this project after seeing Harry’s nice Megabloks ships. The detail on these toys is realy very good and with an expert paintjob they’d come up really nicely. Mine will not be an expert job in part because I find at the moment I don’t have much patience and would rather devote the times when I find the focus to painting miniatures (and, of course, sculpting more Space Dorfs). So the painting is rather rushed and I might go back and work into it if I feel like it nearer the time. I did notice that fellow Oldhammerer Paul Ede has the same boat in his hobby cupboard so it will be interesting to see his take on it. Right, to the step by step….


The concept for the ship was initially an Orc hulk, then it was an Orc hulk under the captainship of my favourite old Ogre and towed by a Goblin airship (stay tuned…) but now the back story is a pirate Orc crew that was ‘rescued’ from their shipwreck by a mysterious Ogre shaman. Turns out he owed patronage to Father Nurgle and the Orcs and their Goblin skivvies are now fated to sail the seas forever in thrall to the plague ship THE NURGLITCH. If they ever set foot on land the rot would catch up with them and they would crumble to the dust beneath their feet. 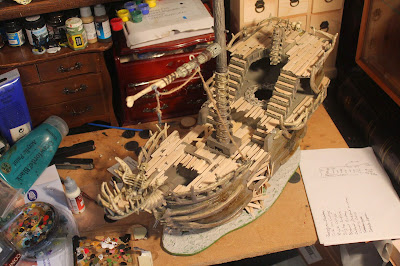 The ship itself is a plastic Megabloks pirate ship so it has bumps all over the deck. First job, do away with the bumps! Originally I planned to grind them back and carve in extra detail with a dremel since the sculpted planks are actually quite nice. But that plan kind of disintegrated and I opted for the quicker method of covering the studs with lolly sticks. They were snapped rather than cut to give an old, weathered look and I left the studs on under them to make it look a bit gappy. 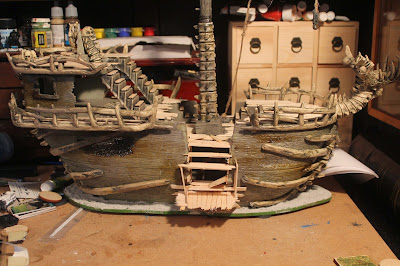 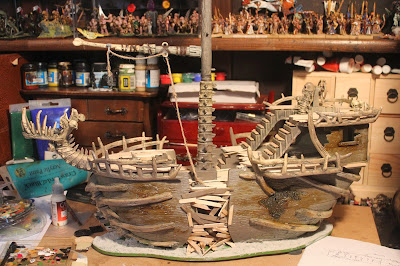 Oh, before I did this I chopped a chunk out of the middle of the ship since it was a bit long as it was and I wanted it to have a stumpier, Orcy, hulky look. That left some space in the middle to be filled with splintered lolly sticks and I also built a platform on one side so the crew could get down to a couple of dinghies. In our trial game one of my crew leapt spectacularly onto an island and splatted himself across the beach so from now on dinghies are a good idea! Except, I know, fluff says they die if they touch land… there is another piece to this jigsaw but that’s for another post! 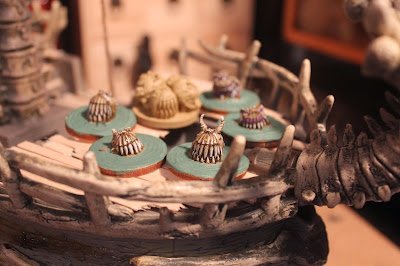 A note on Squigs. One of the things to come out of our trial game was the idea of having a Squig Minelayer and so I have moved the ribcagey bits of the ship around to give myself a Squig Launsher on the bow. The Squigs are in a ready-made pit in the deck and are hoisted onto the ribcage stone thrower with the hook on the jib arm. Then they are flung across the waves. If they hit a ship or land they count just like a stone thrower and the unfortunate Squig is splattered across whoever happens to be in the way. If the Squig lands in the water, however, it acts as a mine, chomping a big chunk out of the hull of any ship that bumps into it. For this purpose I made some submerged Squig counters. The Nurglitch is limited to 5 Squig mines, but it has a little hatch in the stern for retrieving Squigs which scamper up a reinforced corridor in the ship to be flung again from the bow. 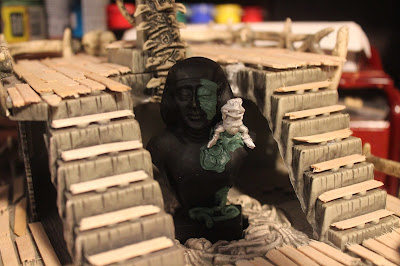 There is another hole in the stern of the boat which leads to the aforementioned hatch. The bone pile around this I like but the hole I’m not so keen on so I dug around for something to fill it. I settled on this guy. He’s an Arabyan relic, a monument to the plagues that destroyed the Arabyan tribesmen who had enslaved the Ogre Shaman’s clan and forced them to labour at building great cities and temples. Through the plague they were liberated… hence, or perhaps due to, the Shaman’s allegiance with Chaos. I added the boils, scarring and entrails to one side of the statue and perched the closest thing to a Nurgling I have (an Oakbound Minis Bugle) on its shoulder. 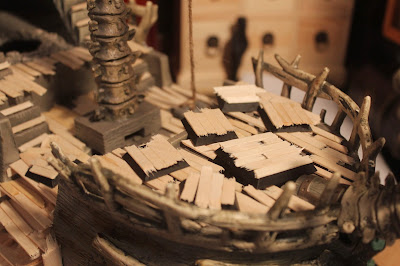 Bases! I’d never painted miniatures on one base and then cut their slotta tabs and pinned them on other, more scenic bases until I decided to rebase my Fimir. Pleased with the results I thought I’d try it intentionally this time. So here are the basic bases I’ll be going for, boarding to match the ship deck. I’ve used Rackham Confrontation bases because they have a slightly steeper slope, slightly smaller top and are a bit higher. All things I think look nicer. To make sure they match I painted the bases at the same time as the ship, masking the black sides to keep them fresh, I find painting base sides black never looks as nice as the original plastic. 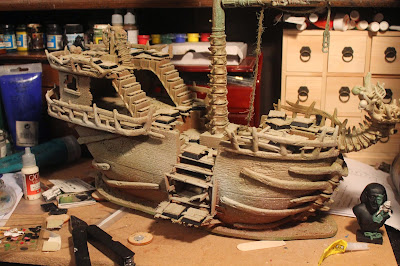 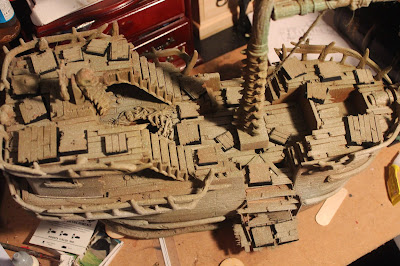 So the painting begins… now this doesn’t look much different from the original I grant you! I wanted to keep a pale, weather-beaten and ghostly/unwell look. I have, however, given it a base of dark brown, misted a dark green, a pale green and an ochre over the top to give some mottling, texture and variation to break up the surface. 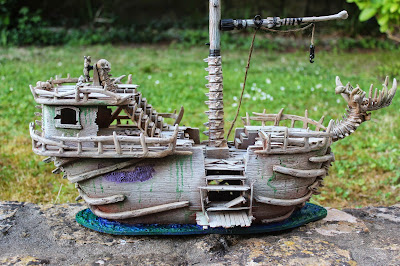 After drybrushing up to neat white around the edges (looks especially nice around the bases, contrasting with the black border) and yellowing the bones with some washes (very dilute flesh wash and khaki) I painted in the sculpted ropes and ironwork in black and did the sea in the same way as the Ironclad (except the wave tops, haven’t got there yet). The metal will get a good rusting. The ghostly sections on the side I washed and then drybrushed in a Nurgly purple, blending the wash into the surrounding wood to give a bruised look. Then I dribbled weedy green down the sides of the ship. The sides will get some crackly rust weathering as well. 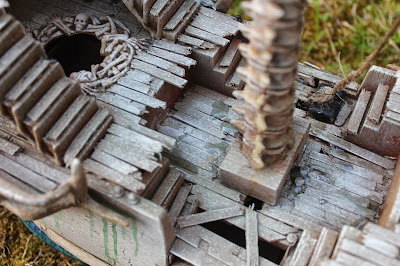 Lastly I mixed up some standard polyester layup resin and dribbled it in pools and on some of the bases. This dries nicely translucent and glossy giving a slimy effect, although it hasn’t photographed very well. I’ll do some more down the steps in a while as I think they would benefit from being a bit sludgier! 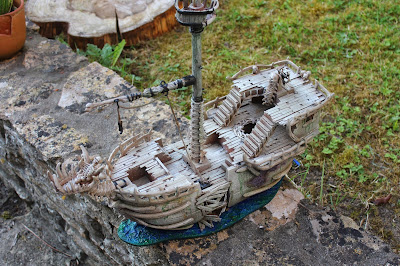 And there she is so far. Still more to do, but at least the crew for this one is nearly painted! Just over two months to go…