It didn’t take long after Bring Out Your Lead 2014 for ideas to form for next year… in fact about ten minutes in the car on the way home saw plans begin to develop! The most ambitious of these is a large naval battle we’re calling OLDHAMMER AHOY! The game will use the rules for ships in the General’s Compedium, altered a bit for speed and Oldhammerishness. Initially my plan was to bring one ship, something I’d been working on for a little while anyhow. Then I was going to have one ship pulling another large hulk. Then, as these things do, it got a bit out of hand and I will now be bringing five ships if all goes well! The plan is to have a number of ‘stock’ ships and crews available for anyone to grab one and jump in. Over the next few blog posts I’ll walk through a few of the ships in progress.


The first of these is the CUTTING SNARK, a Chaos Dwarf submersible ironclad. A bit of an odd one as Oldhammer Ahoy goes in that it won’t have a crew per se and will have to be severely handicapped since it might be quite hard to destroy and carries some serious firepower… rules yet to be decided.
This ship started life from a discarded vacuum form. As some people know I started a new job as a modelmaking technician at a university in October and one of the student projects is a vacuum formed iron to learn product design prototype modelling skills. Inevitably some of these forms don’t go so well and it seemed a shame to waste them so I got to wondering what I could turn one into. Since I’d also been doing some revision work on Tripods! the board game Ironclads were very much in my mind and the shape just cried out to me as a perfect basis. The week was quite quiet so I started trimming sections of plastic rod and gluing rivets… 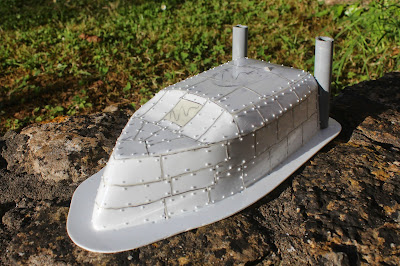 The first step was to mark where the plates of the Ironclad would go. I wanted an industrial, Victorian look for the ship so went for big plates and rivets. I used a marker to rough out the plates, then cut oodles and oodles of tiny lengths of plastic rod and used a pin and small pools of superglue to stick these ‘rivets’ in place. Then I cut mm wide strips of masking tape and stuck them along my pen lines to mark the joins between plates. The chimneys were sections of plastic pipe cut to length and blended into the side of the ship with milliput. The turret and paddlewheel at the rear I made from lolly sticks cut to length and joined with superglue and reinforcing strips of paper. 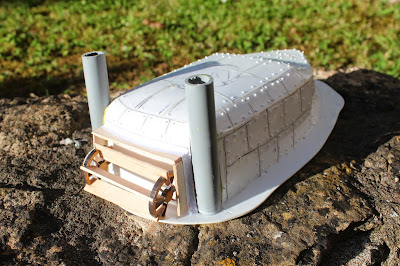 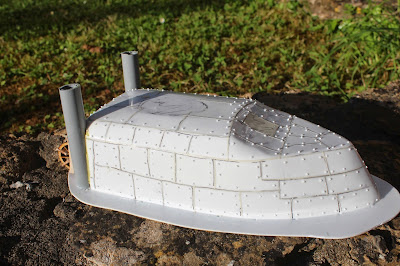 To make the plates stand out I sprayed about 8 thin coats of primer over the form... 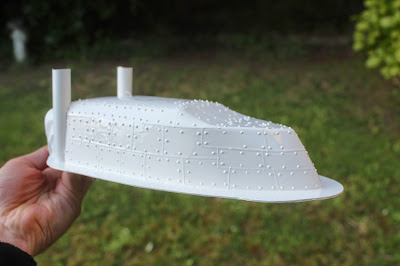 ...let it set and carefully peeled off the masking tape, leaving recesses between the ‘plates’. 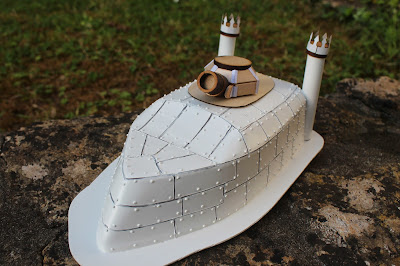 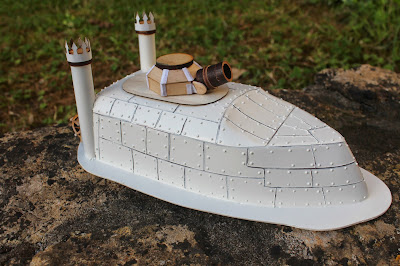 Then I added a hull-mounted cannon and a turret-mounted mortar made from various bits from my junk drawer and some green stuff to make suitably oriental gargoyle heads to adorn the muzzles. I also green stuffed the tops of the funnels with some roughly-shaped bearded heads and skulls and added some nasty-looking 40K meat hooks. The water was created by dabbing poly filler onto the base with a stirrer, making sure that the water was most ‘agitated’ around the bow to give the impression of movement. Polyfiller was also applied to the lower blades of the paddlewheel to simulate their churning through the ocean. 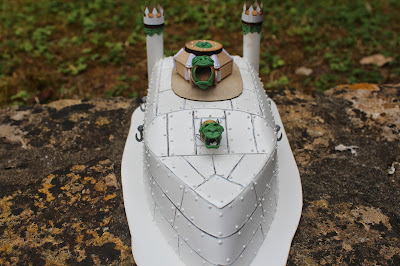 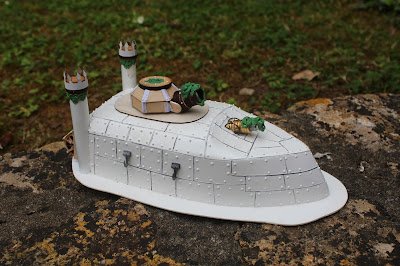 Then everything got a light coat of matt black... 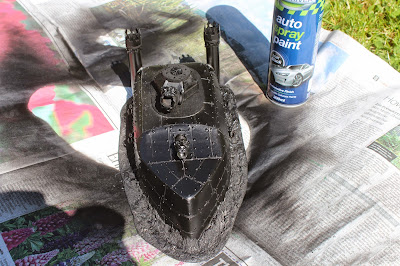 ...followed by a light overspray of beige (with the can held at quite a distance). 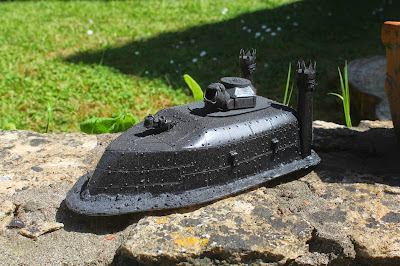 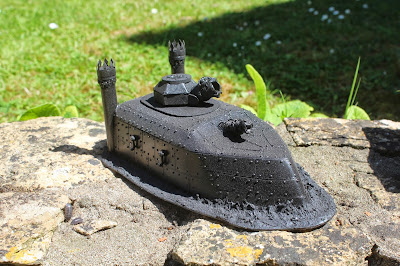 Next the drybrushing began. First three fine coats of grey followed by an even lighter layer of white brushed downwards and focusing on the ‘corners’ of the hull shape. Then each of the rivets was outlined with an oil-effect wash, dragging some of the wash downwards to look like drips. This is also good for hiding the bits of over-enthusiastic dry brushing! The gaps between the plates had cd-marker pen lines to reinforce the outlines. 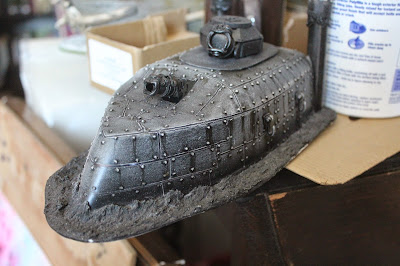 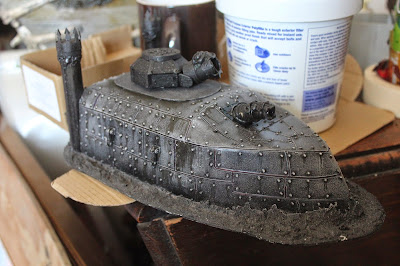 The wooden areas had a coat of Vallejo Dark Flesh, then Filthy Brown and finally a light brush of Khaki, working from the middle out to leave dark areas toward the banding. These need further detailing with a finer brush (tomorrow’s job possibly) to do the grain, gaps between planks etc. The metal areas got a coat of Vallejo Bronze and were washed with old school Citadel Expert Rust Red Ink. They still need proper highlights and shading. 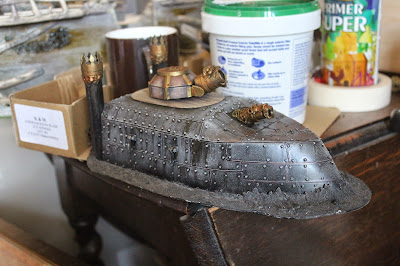 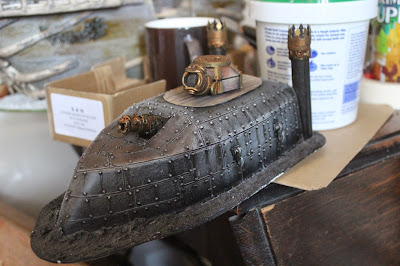 The water was painted with a dark blue poster paint, then had an emerald and grass green readymix paint dabbed into it whilst wet to provide variation in colour suggesting depth. Although I think we’ll be gaming in blue seas at BOYL 2015, the water on my own terrain boards is green so I’ve tried to go for a blend of the two, perhaps leaning more towards the green. The very tips of the roughest waves were given a gentle white drybrush, but because I did this whilst the green was still wet the result is a nice blend from the foamy white tips into a lighter green wave. Finally a layer of black ink was painted along the line where the waves meet the hull to provide definition and clean up any ‘sea’ which had got onto the hull. 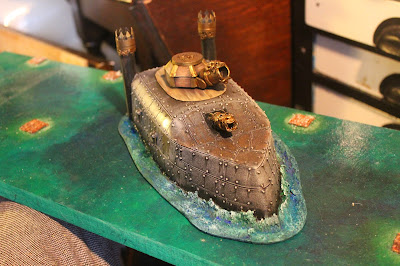 And there she is, the Cutting Snark. Still lots of detailing to do, so there’ll be another post with her finished and her background and rules detailed. But for now I hear another ship calling for me to finish planking its deck…. 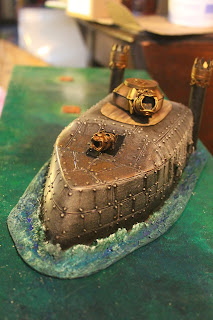 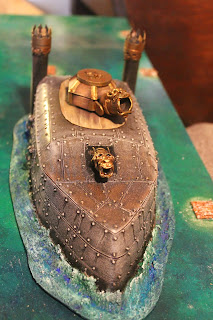