After a couple of days of intense painting I have my Fimir army about half finished., which means I actually have about 1000 points of playable army, hussah! Time to start playtesting those rules I wrote about seven months ago, I might even get a few games in before Games Workshop bring out an official armies book! I haven't done any base work yet since I want the bases to tie in with the marshy gamesboard which I haven't started work on yet.

The Fimm, lead by the Flaithmor (dyed woad-blue!) and including a Finmor and a Uillean Piper. No banners yet since I'm still undecided about how they should look. I'd like to go for an 80s Citadel style with brightly coloured paper banners, but not sure how to tie them in with the models. 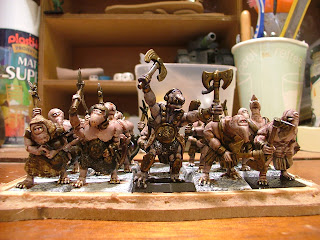 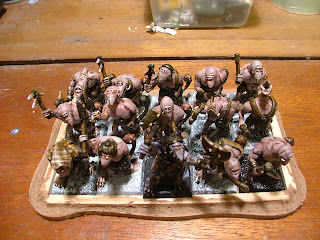 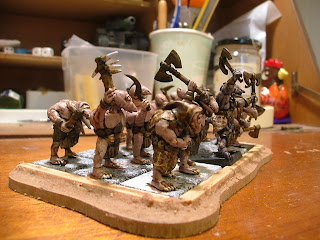 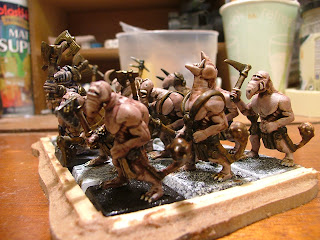 Close up on the Flaithmor model with his double axes. Had to wash his back a bit with a sepia ink, he came out rather too blue at first and resembled nothing so much as Gonzo! I've gone for a beige tartan for the cloth in my army... hoping it doesn't look too burberry! No chav Fimm here. This guy is affectionately known as 'The Chief' because of his similarity to the chief weasel in Cosgrove Hall's Wind In The Willows! 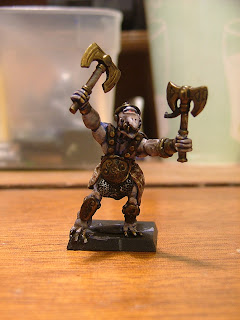 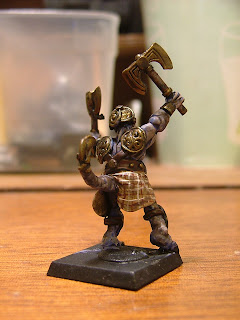 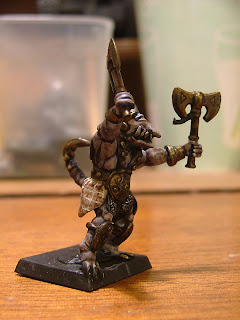 My Mistmor, the troll-sized guardians of the Fimmy fortress. Only three of them here, the fourth is still being converted. These models were a delight to paint the more I paint figures from the 80s the more I fall in love with the style, for some reason it's far more satisfying than working with contemporary GW stuff. 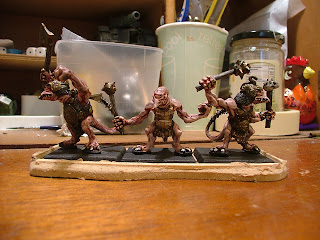 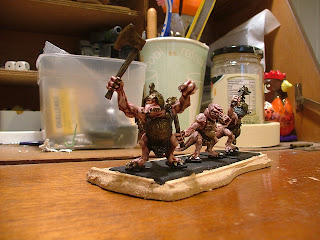 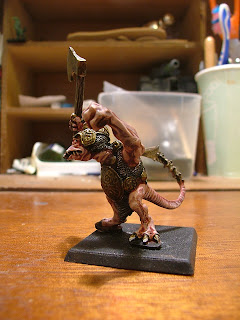 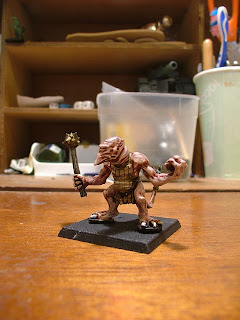 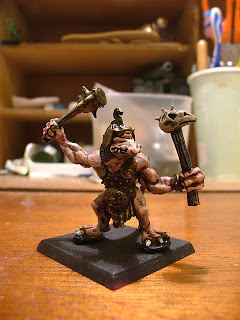 The Dirach and the Drui. The Dirach is based on the Skeksis from the dark crystal, hence his blue-grey hue, bone carapace and wrinkled skin. The old citadel Dirach had stange mini-antler horns but I decided to go with curled ram's horns, they're just more Henson! One of the things I love about looking at citadel armies from the 80s is the range of colours, the skin tones vary so much across units. I think it's appropriate for a demonically-tainted, mutant race from the dawn of time to have a diverse range of colouring so I'm using flesh tones, blues, browns and greens on my clan.
The Drui is based on an UrRu. His staff snapped off, unfortunately, and got lost so the blue paper clip is forming the basis of his staff mk2 which I need to get round to sculpting. Particularly fond of his smooth-clubbed tail. 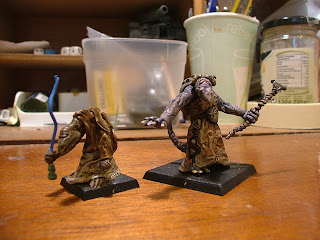 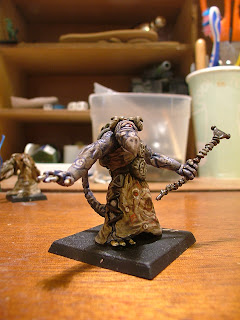 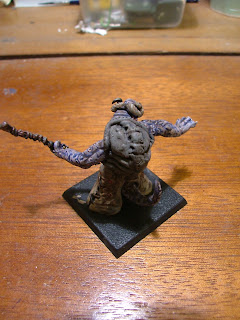 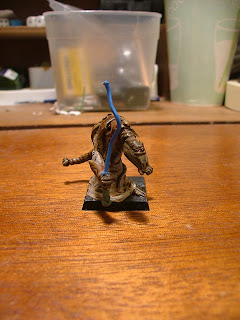 After spending such a long time on the Mistmor I wanted to take things a bit easier on the Kelpies. Fortunately a black base coat, drybrush with light green and wash with dark green ink has given a nice, marshy, spectral feel with very little effort. Hussah! 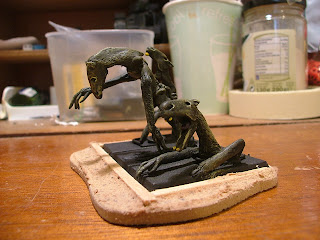 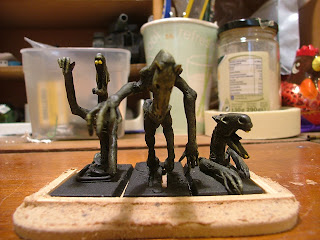 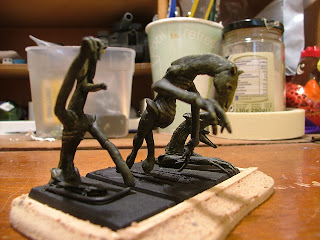 So here's the painted army so far, including their celtic human allies: 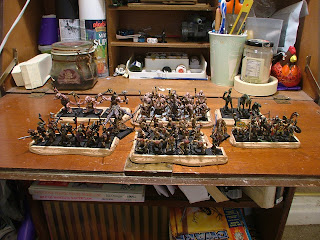 And here's what's left to do. Two units of half-painted Shearl (heroquest Fimir), a Fimm Slaver, one Mistmor and my Jabberwock. I've given the Shearl a lot of diversity in their skin tone since I wanted to use a few for my Heroquest game, which has taken its colour scheme from the Mike McVey models on the box... in which the Fimir are green. 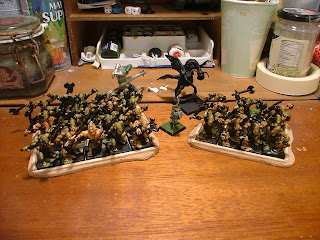 Well, it's been a long time since I last posted on this blog but the Fimm have not been far from my mind. About a month ago my good lady expressed an interest in painting some miniatures, of course I leapt at the suggestion! I hadn't intended to have a Meargh for my clan jus yet, since it would be a mighty Fimir army indeed that would include the venerable queen of the tribe! However this seemed like a good opportunity to have a go at one.

I wanted to continue the Dark Crystal theme and so decided to draw on the UrRu for my Meargh figure, after all, the only Fimir with hair would be a suitable use for those hairy mystics! I also liked the idea of the Meargh having four arms, and sculpting in all the spirals on the coat seemed like it'd be fun. Here's the unpainted result: 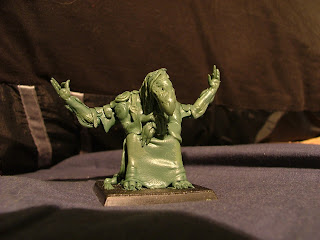 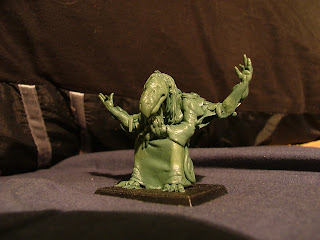 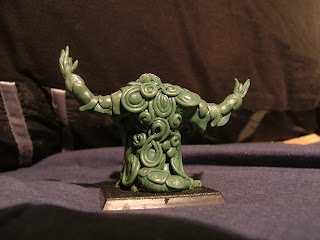 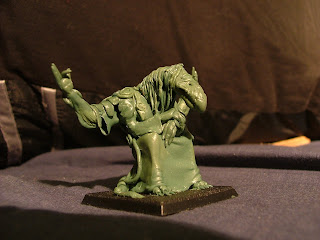 I have a character in mind for the Meargh of my clan, and it may be that this figure ends up not fitting that background, but good to at least have a trial run on a fimmy hag queen!