Just a reminder that if you're a follower of Fimm McCool's you might want to be on the alert that from the 1st December it will be moving URLs to  FimmMcCools.Blogspot.co.uk 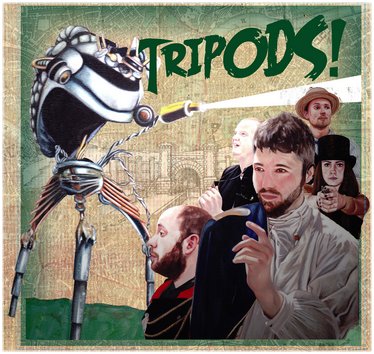 It has been a few years now that Fimm McCools- formerly Fimm McCool's Games Orkshop has been running. About a year ago what was purely a hobby became a hobby/business with the creation of Oakbound Games- intended to be a way of making the hobby cash-neutral, doing some interesting things with our creations and working towards uniting small, independent games designers, sculptors, painters, and enthusiasts to create magic worlds of our own which couldn't be managed apart.


What with the commercial side becoming blurred with the hobby I want to be able to continue to post (in hopefully increasing amounts) on this blog with modelling, painting and gaming projects but also need to be able to reference the doings of Oakbound and other independents safely within it. For this reason I have decided that whilst 'Games Orkshop' was a funny play on the name of a former favourite company it is too close to keep whilst promoting other miniatures companies. Therefore


FROM THE BEGINNING OF DECEMBER FIMM MCCOOL'S WILL BE RELOCATING TO:


The site isn't live at present, and hopefully this will just be a URL switch so all followers should be preserved, but any links to the blog will need updating from December 1st.


Thank you for your continued visits and I hope to see you all on the other side after the switch. 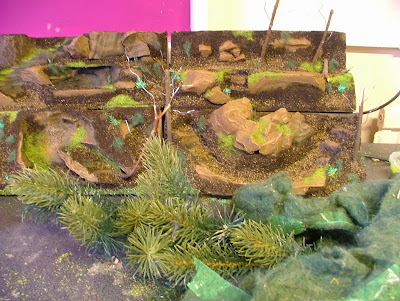 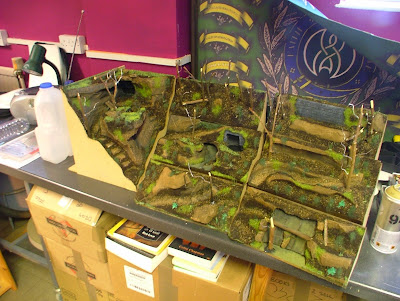 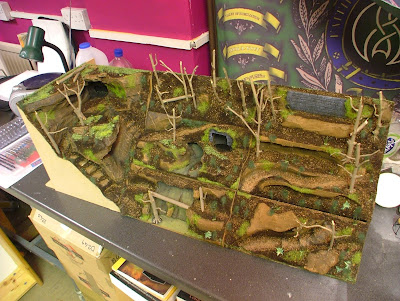 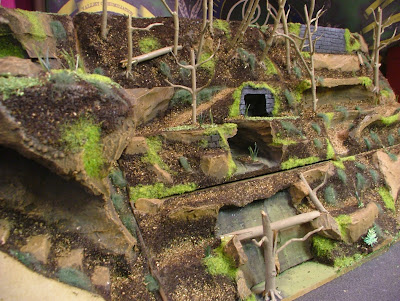 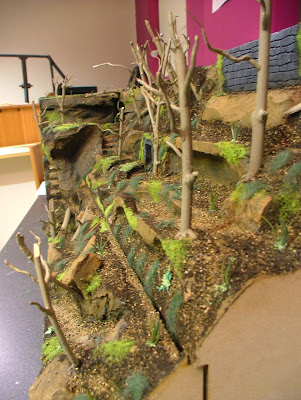 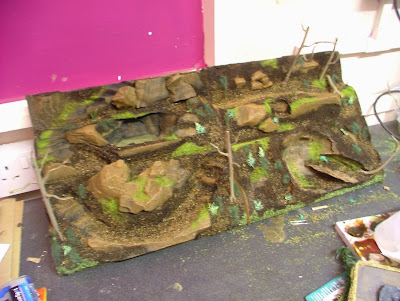 A restful sunday afternoon it has not been.

If you've never rebased models, my advice is don't! There's very little of my Fimir army that hasn't been snapped, chipped, bent, dropped, lost or otherwise damaged in the process. Weapons have come off, in one case a head has been lost somewhere, having to cut the integral bases off the Warlord miniatures celts lead to some nice wading-through-the-swamp poses, but also a lot of broken swords and spears. The HQ Fimir I chopped off their HQ bases to mount on 25mm bases it appears were thus mounted rather well, many of them lost toes in the process of relocating them on their new bases. The legs of a couple of the large Citadel Fimir have suffered chipped paintwork where ankles have net getting them off their old bases and several more metal figures will need touching up after the super glue proved to be not so super and fell off their new mounts.

Nevertheless.... the army is rebased. Well, most of it. There are two units of Fimm which are based but not in these photos and I haven't based up the stuff that's not painted yet. Plus I haven't added the detail yet, just a general ground cover made of flock, architect's model grass and static grass. I've got some shrubs, rocks and things to make them look more interesting. 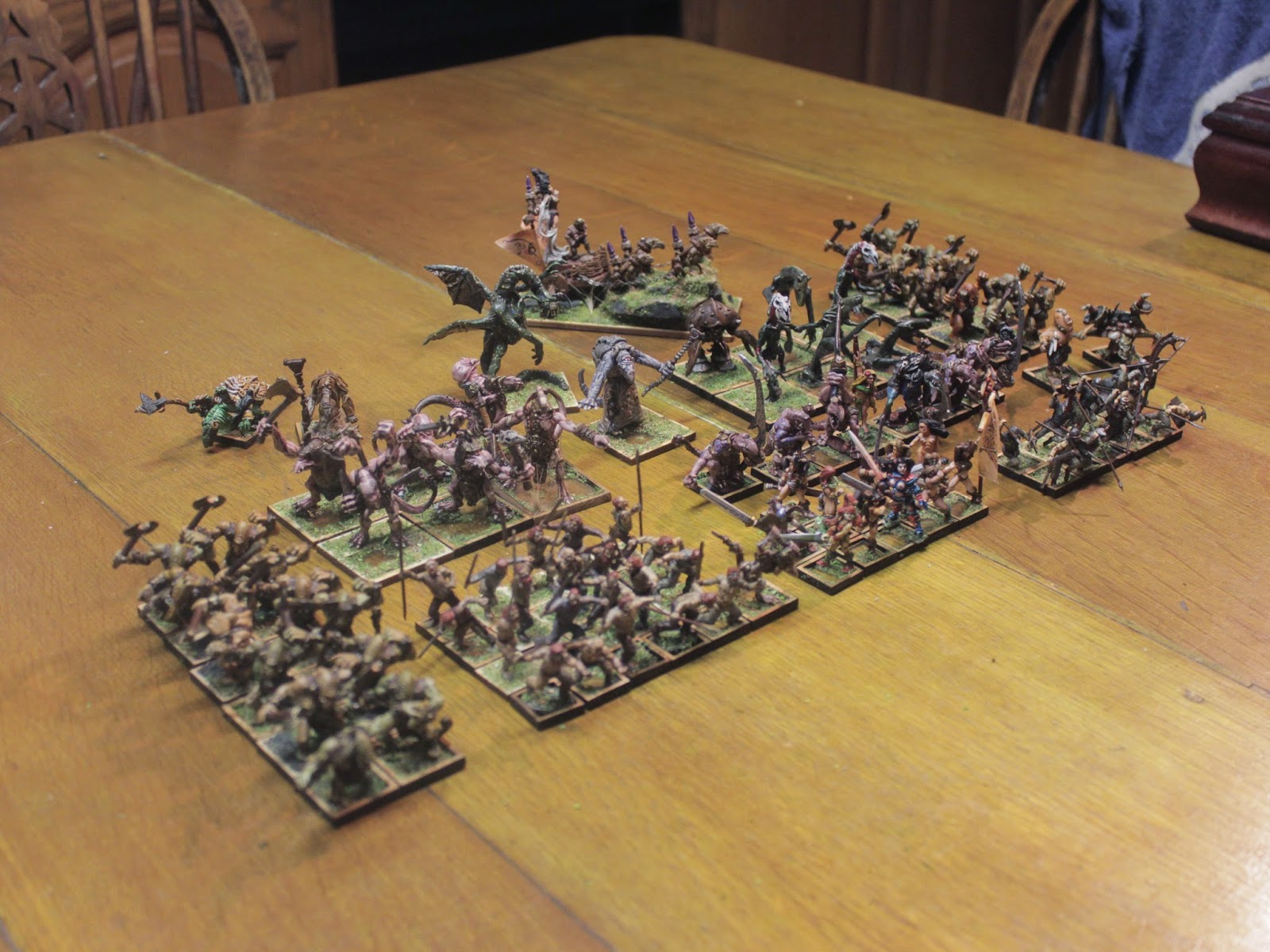 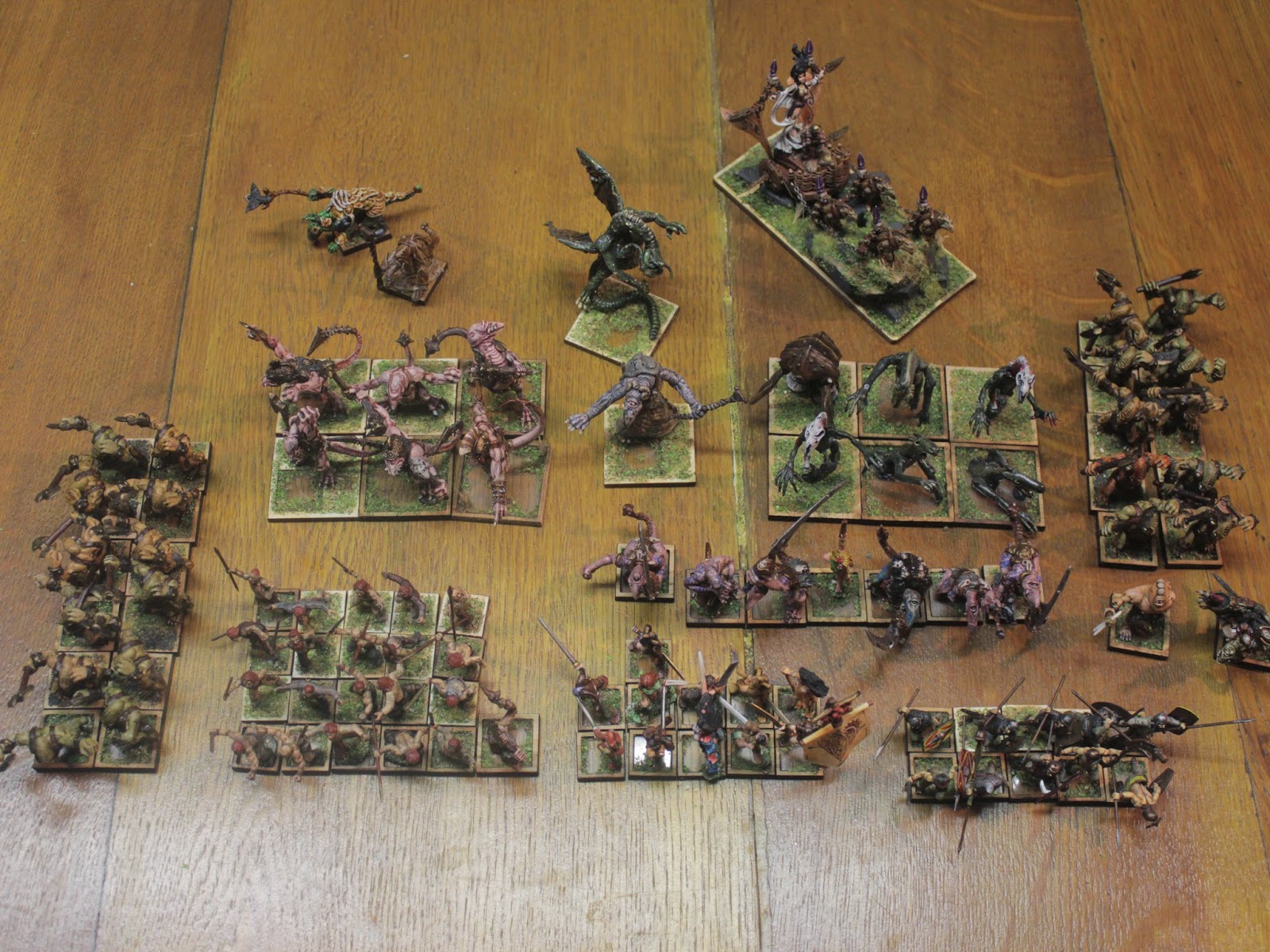 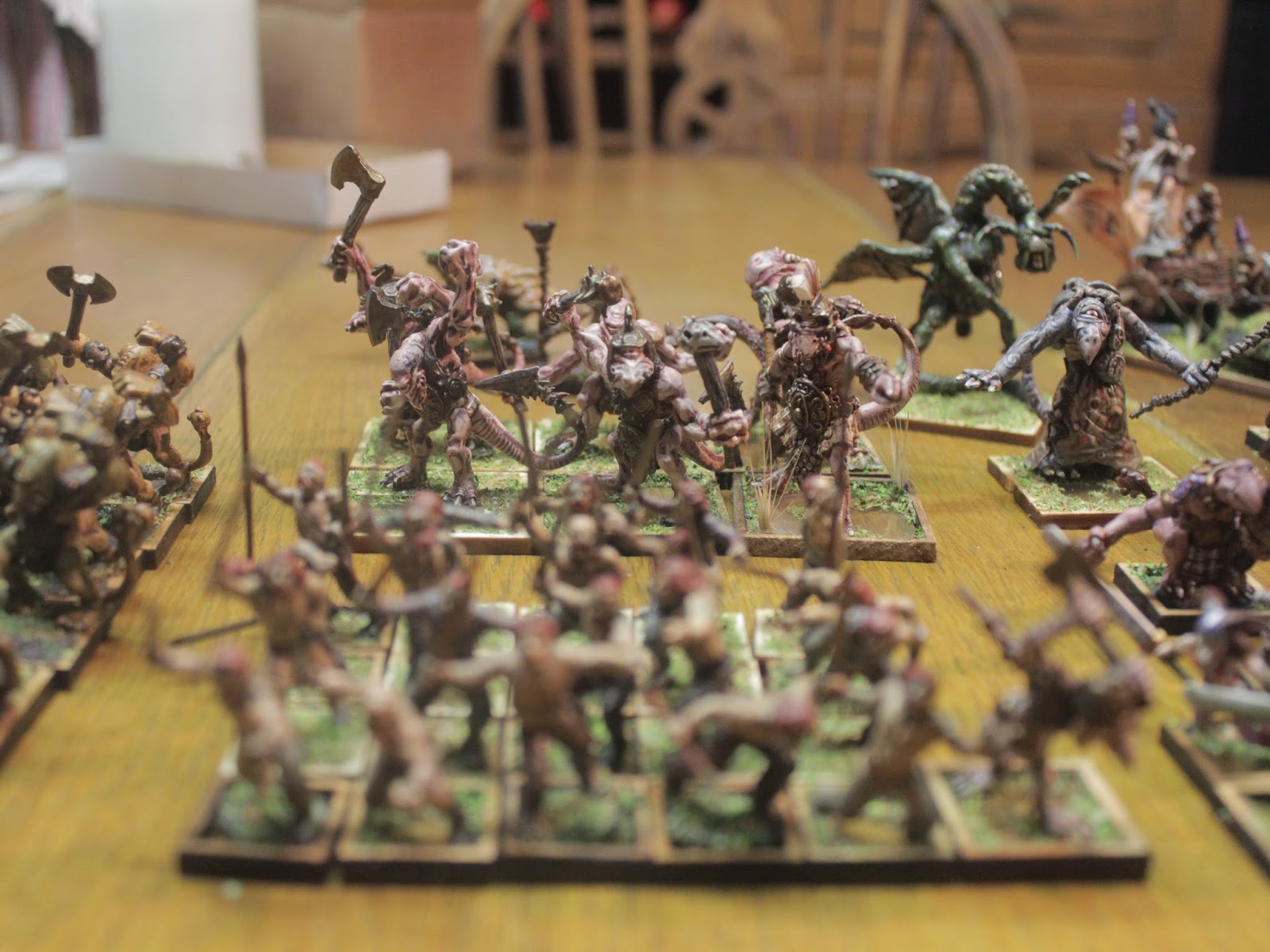 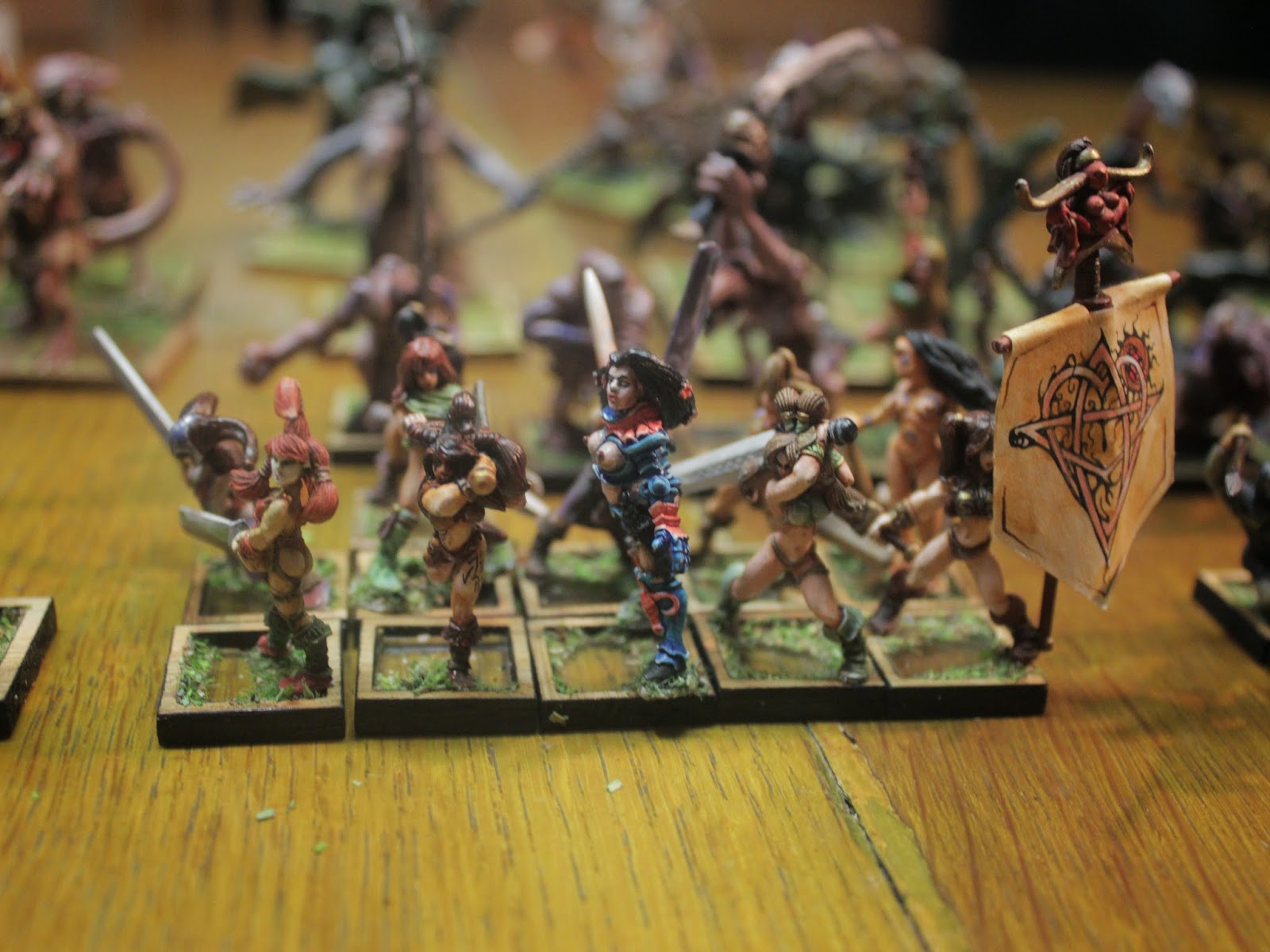 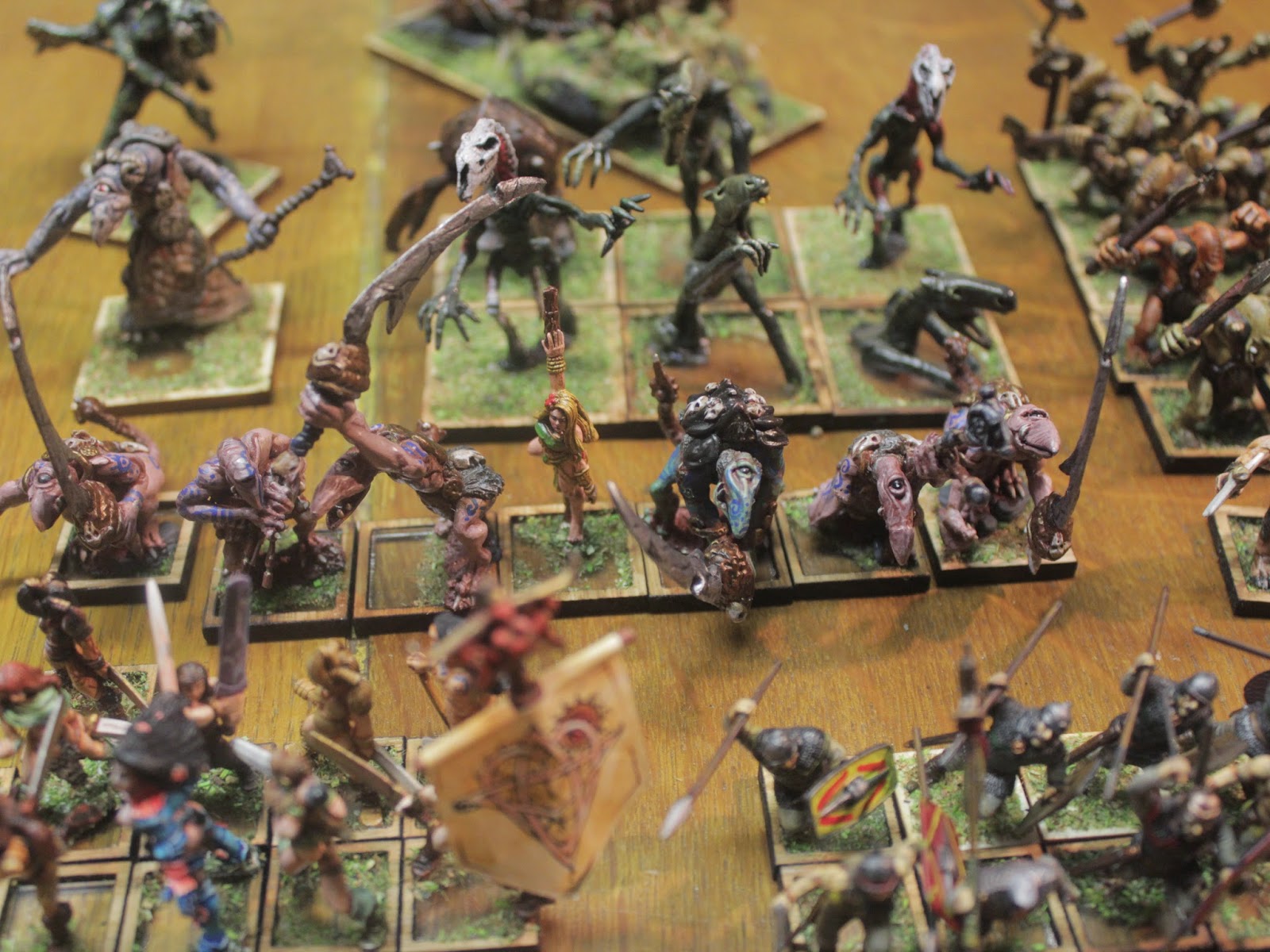 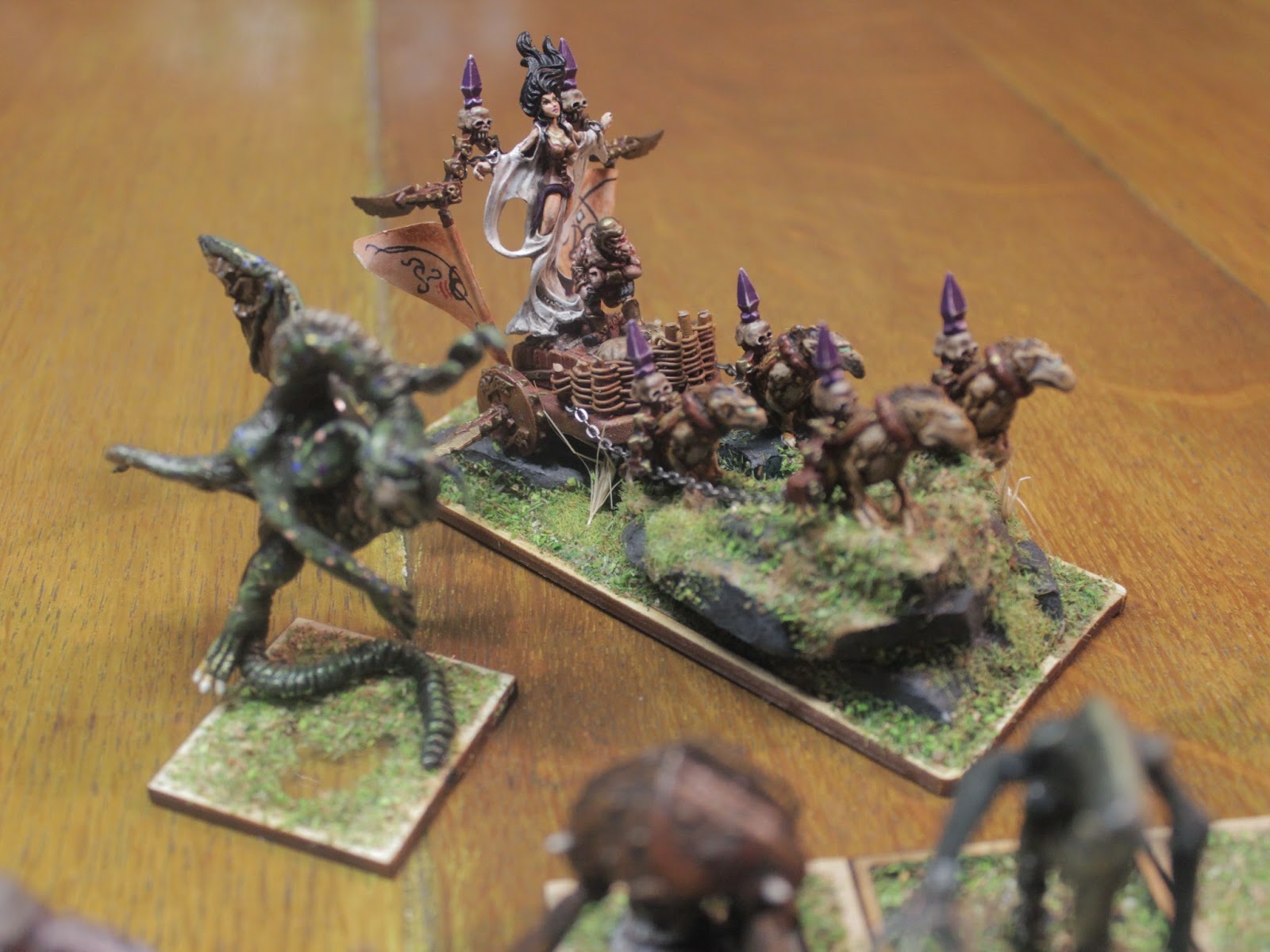 Now a lot of people have been asking about the clear bases. Well chaps, they're just regular clear acrylic- Perspex to use a brand name- that's readily available from most DIY shops. Chopped them to size with a band saw. The trims I'm afraid I laser cut. I wasn't about to cut oodles of fiddly frames by hand, and they'd most likely have split anyway, a fair few did even with the laser. That does mean I have to sand off a;; the burn marks around the edges, but for the units that will be in movement trays the edges won't be on show anyhow so I might not bother. Also, not all the bases have acrylic set in. It's mostly character models and the edge models of units.

Once I've got the movement trays done... as I say, I have a good idea for them... and touched up all the chip/scratch/break I'll get some full army pics. Then it's a question of painting the last two chariots and two-dozen or so models to fill the army to its current planned capacity.

Was it worth all the swearing, cursing and carnage? Maybe... we'll see when it's all together!

If you've had a look through the Clan Myeri photos on the page above you'll have noticed that some of the basing is... incomplete? Rudimentary? Lacklustre?

Truth is, I haven't been sure how to base them up. I really want the look of these kinds of 'English' marshes:

Hopefully my gaming board will have this kind of look sometime as well, but how to achieve it? Well, I've had an idea.... Here's test piece one, Diego's excellent Not-Fimir warlord: 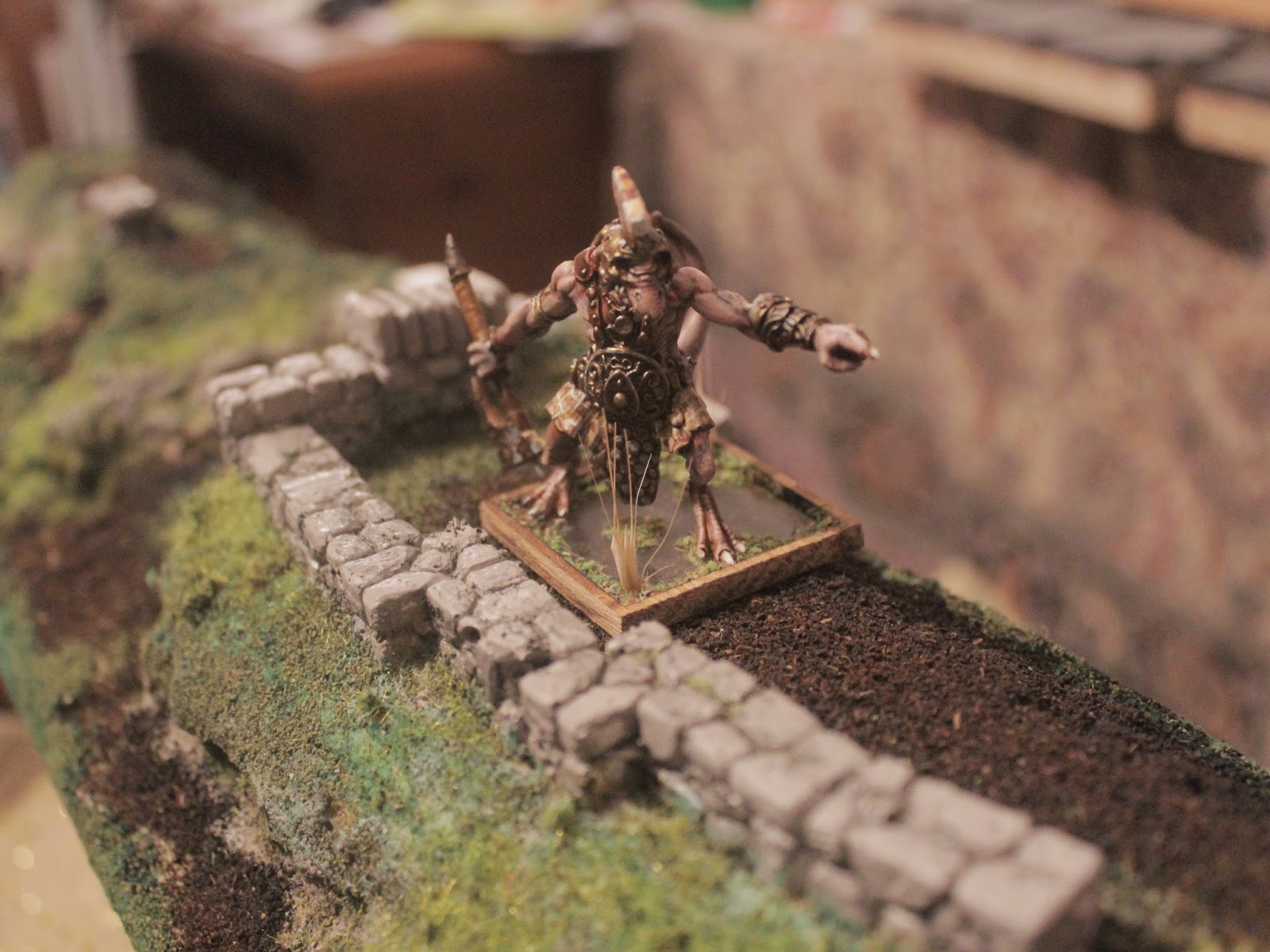 ﻿
Wooden edging, bits of flocking and some dried seed pod grasses.... but the real trick is: 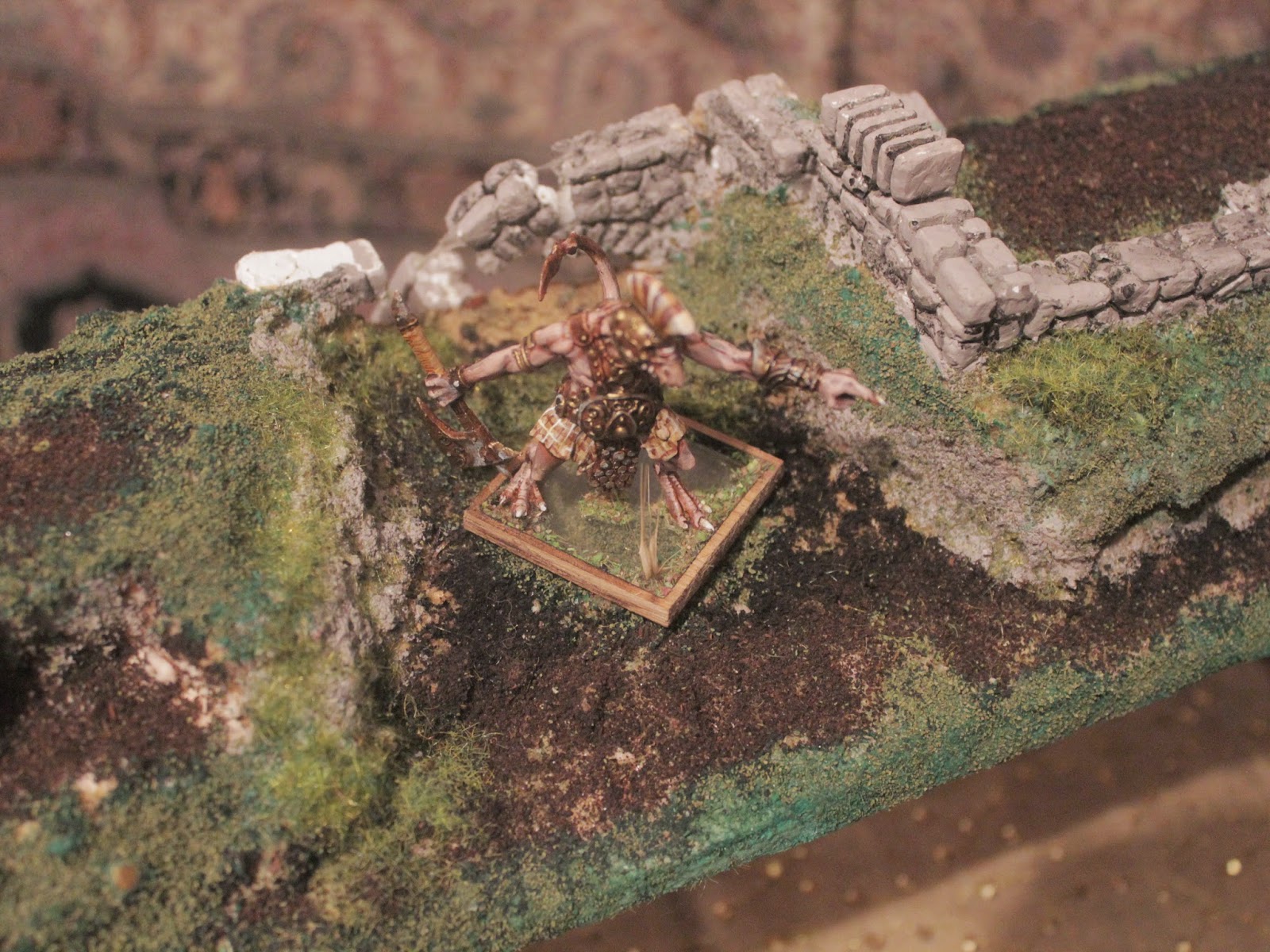 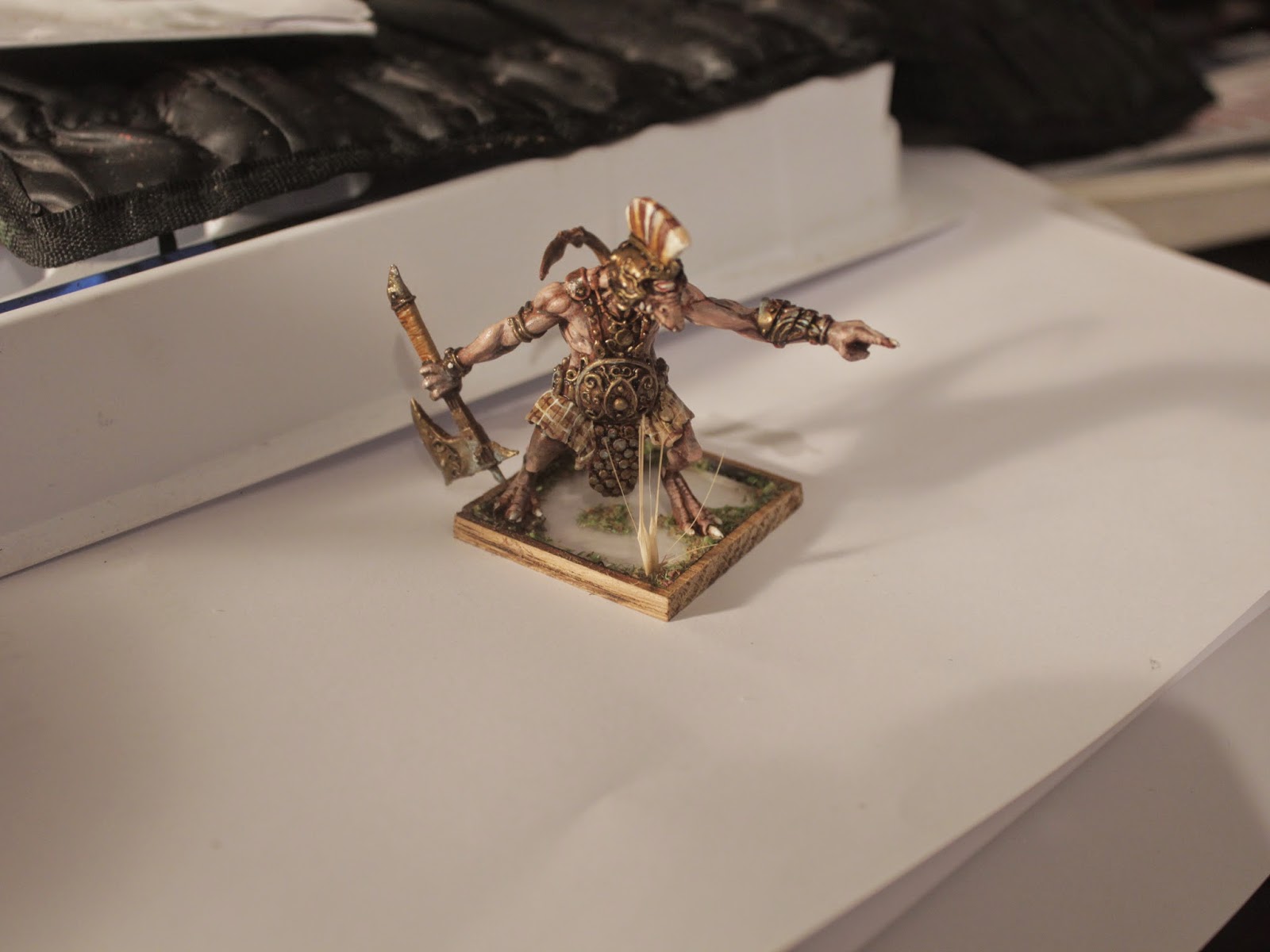 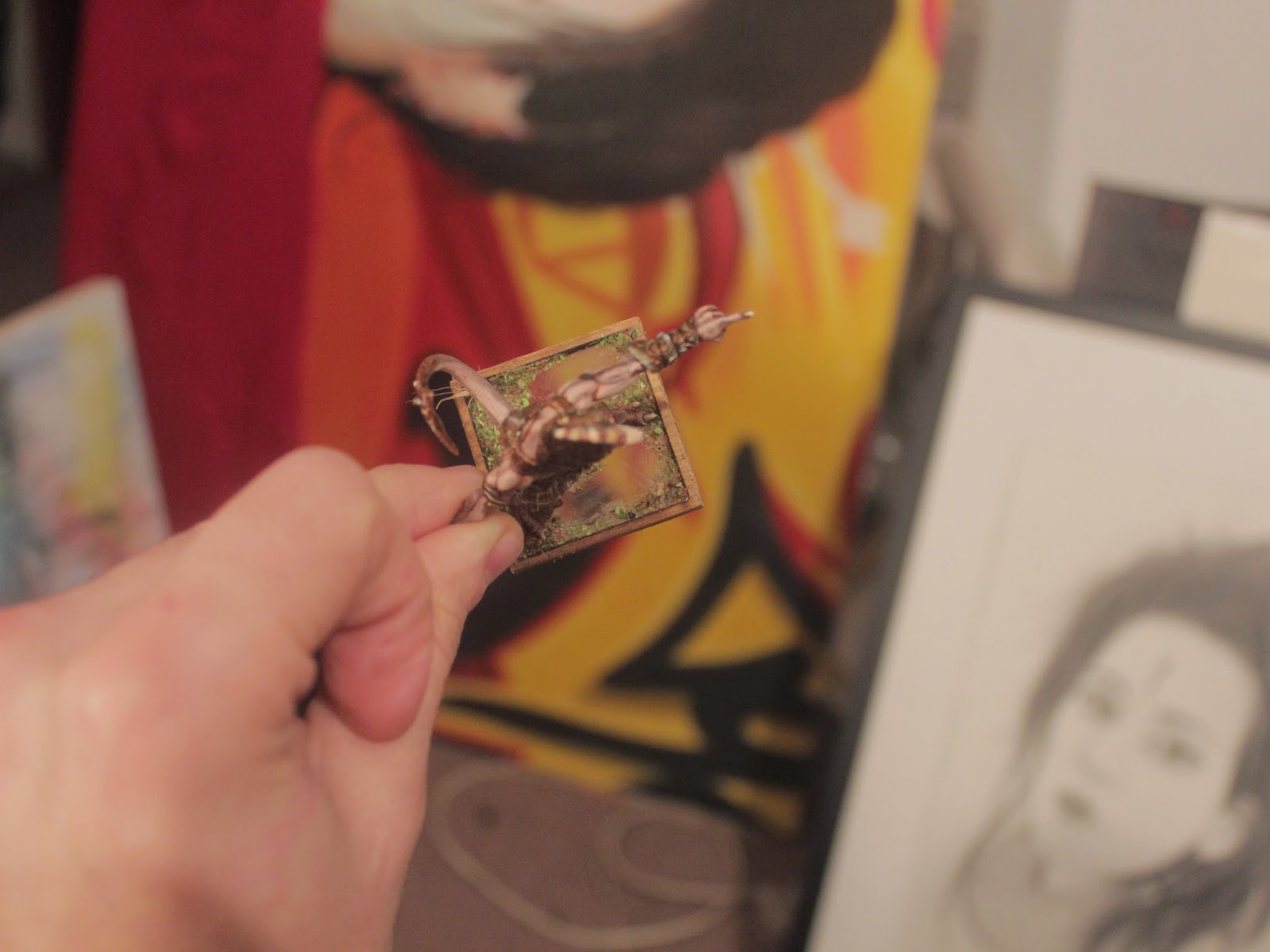 ...clear acrylic (Perspex) base! That means whatever surface he's put on will show through, but look like it's under shallow water. I've used the same technique for the rivers on my desert board and the river on my woods terrain but for some reason the thought never occurred to me to use it on the bases until now. I have actually tried it out on a unit of Fimm as well, photos to follow, and it looks good so I'm hoping to get everything I've got painted suitably based this weekend. Of course, everything that has movement trays will then need the tray under the bases to be suitably decorated- I have some good ideas for that...

Last week I wrote about picking up the long-standing project to make scenery for The Woods figures photography. If you missed it, you can find it here: Oakbound Woods part 1

This week I'm picking up with the first layers of cover. Sadly there's been no word on the master castings in the meantime.

First thing to do was to cover most of the boards in earth. 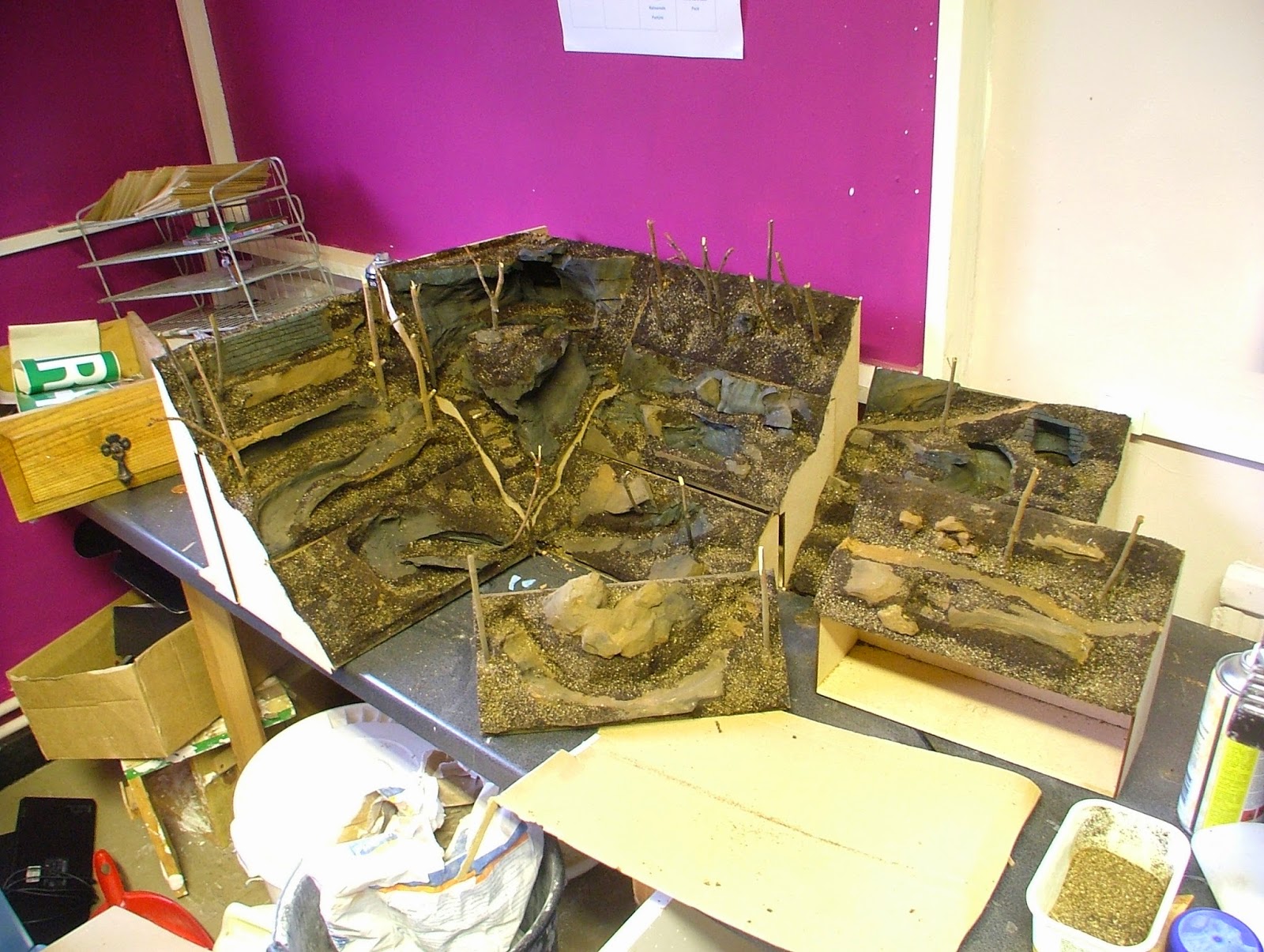 Since I'm going for a rich, forest loamy, mulchy soil, 'earth' in this case is.... PG tips! Straight out of the tea bags. Quite a lot of bags. Tea looks great for kind of terrain I'm going for, but watch out if you have any kind of damp atmosphere going on as, obviously, it is prone to mould. I live on a boat. There IS damp! To counter this these have been given a very thorough dose of varnish. This also acted as a nice adhesive for the second layer of ground cover, fake leaves. Again, lots of them. It's important when dropping leaves all over the scenery to make sure they fall as they would in a real forest, building up around the bases of trees and bottom of slopes. Then I drybrushed the exposed rocks with a few layers of mid brown building to brown/white, going back into the shading with black washes afterwards. 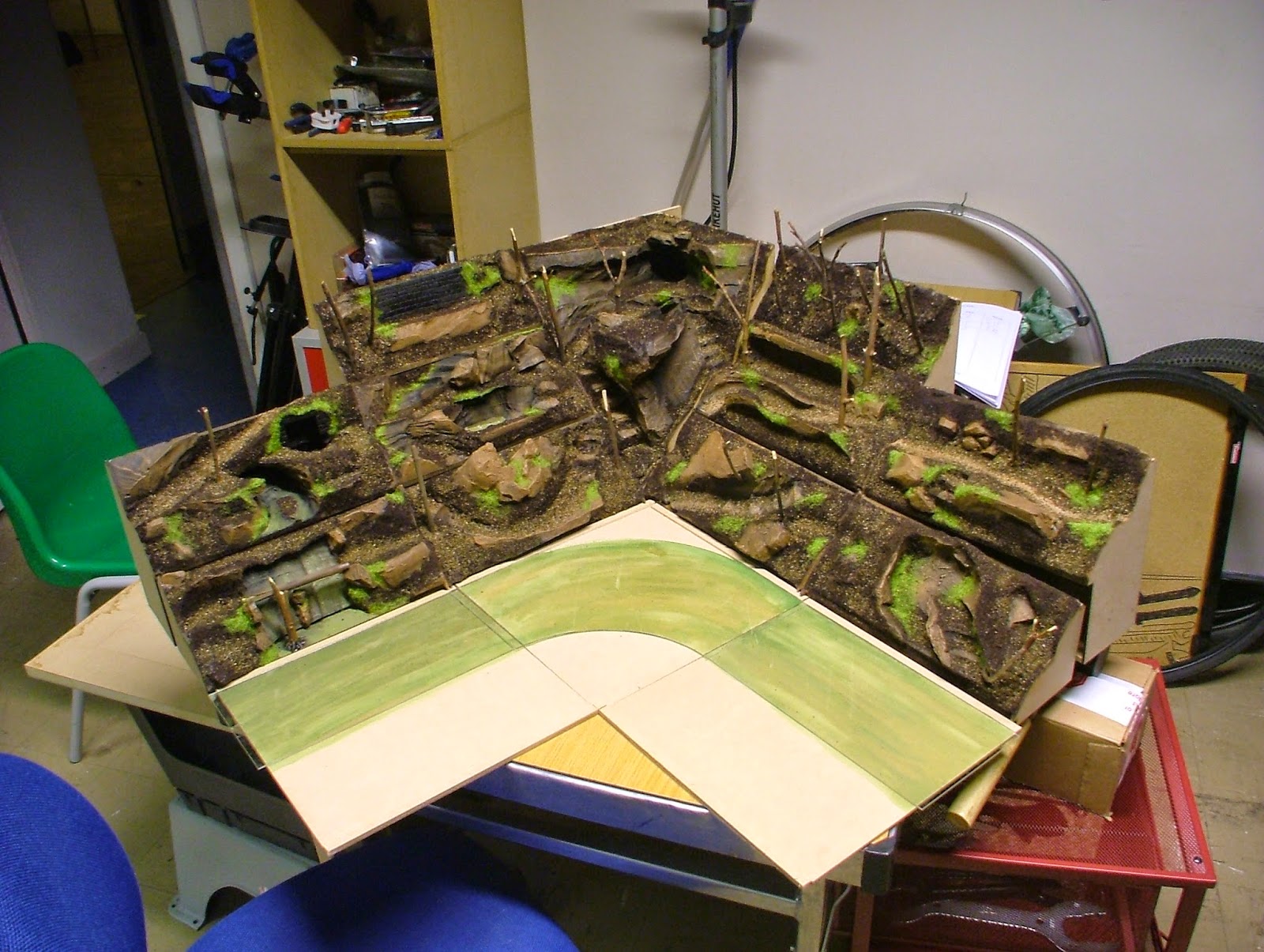 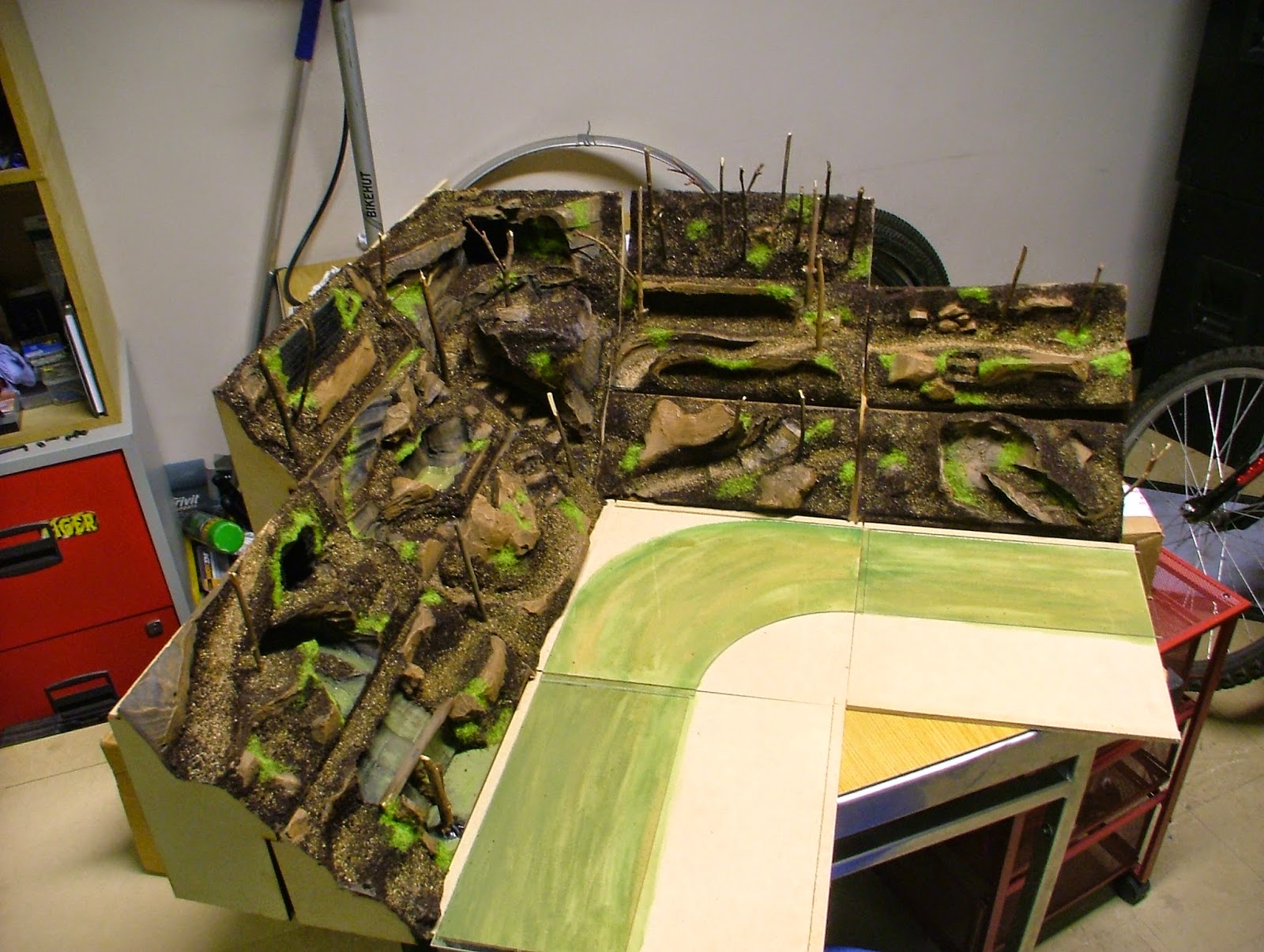 Here I've added the river that will run along the base of the valley, just painted boards with a sheet of Perspex laid across the top for depth/reflection. I'll probably use some PVA to add ripples next week. A you can see, there is some water falling down the slopes too.
The next step is to make the branches of the trees, paper clips set into the trunks and covered with milliput, and the foliage that covers the slopes- ferns and bracken mainly. 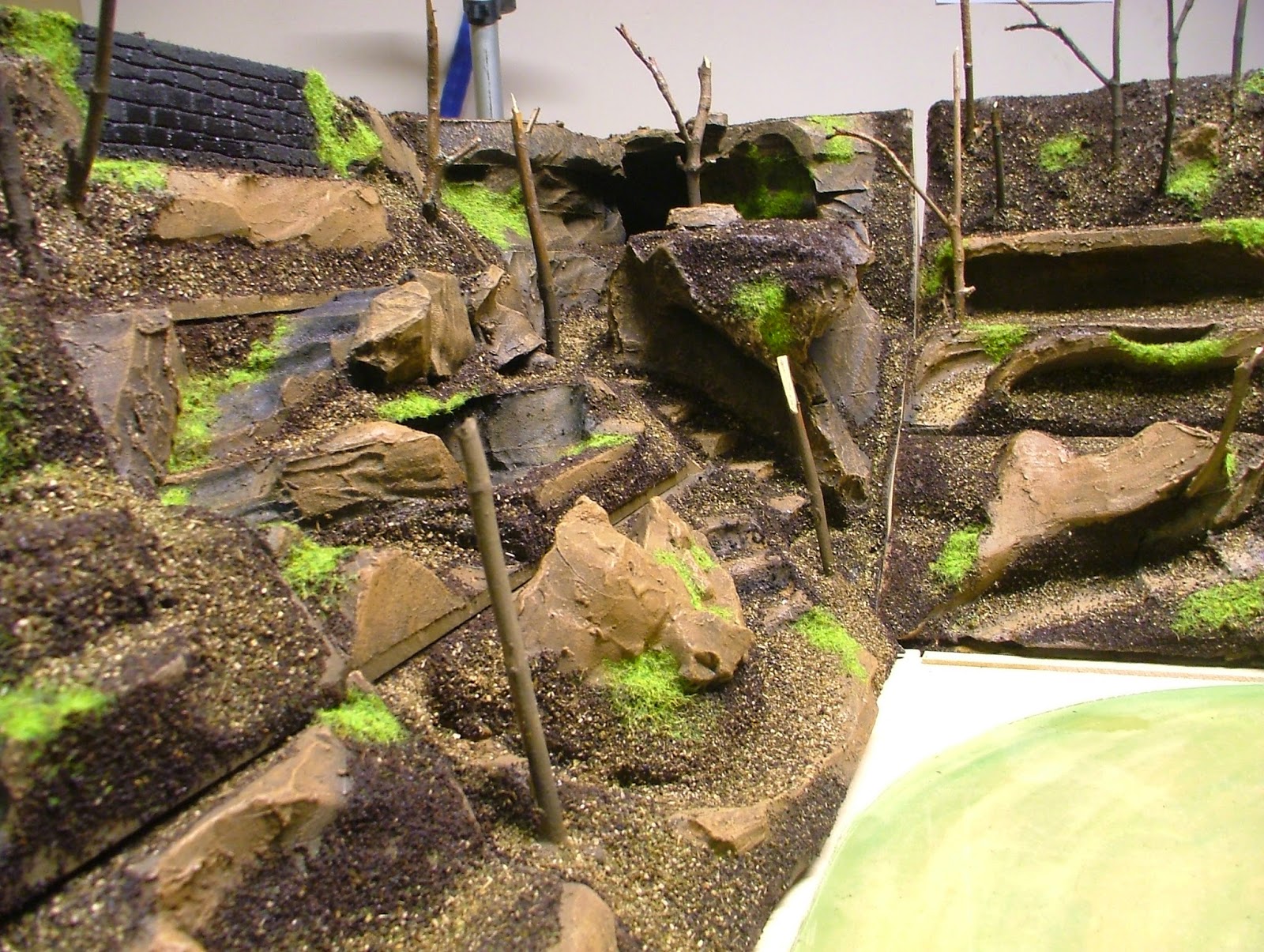 The very excellent Modiphius Entertainment are throwing their biggest ever DRAGONMEET on the 6th December at Earls Court. Oakbound will be there along with many other brilliant companies, guests and scores of games. 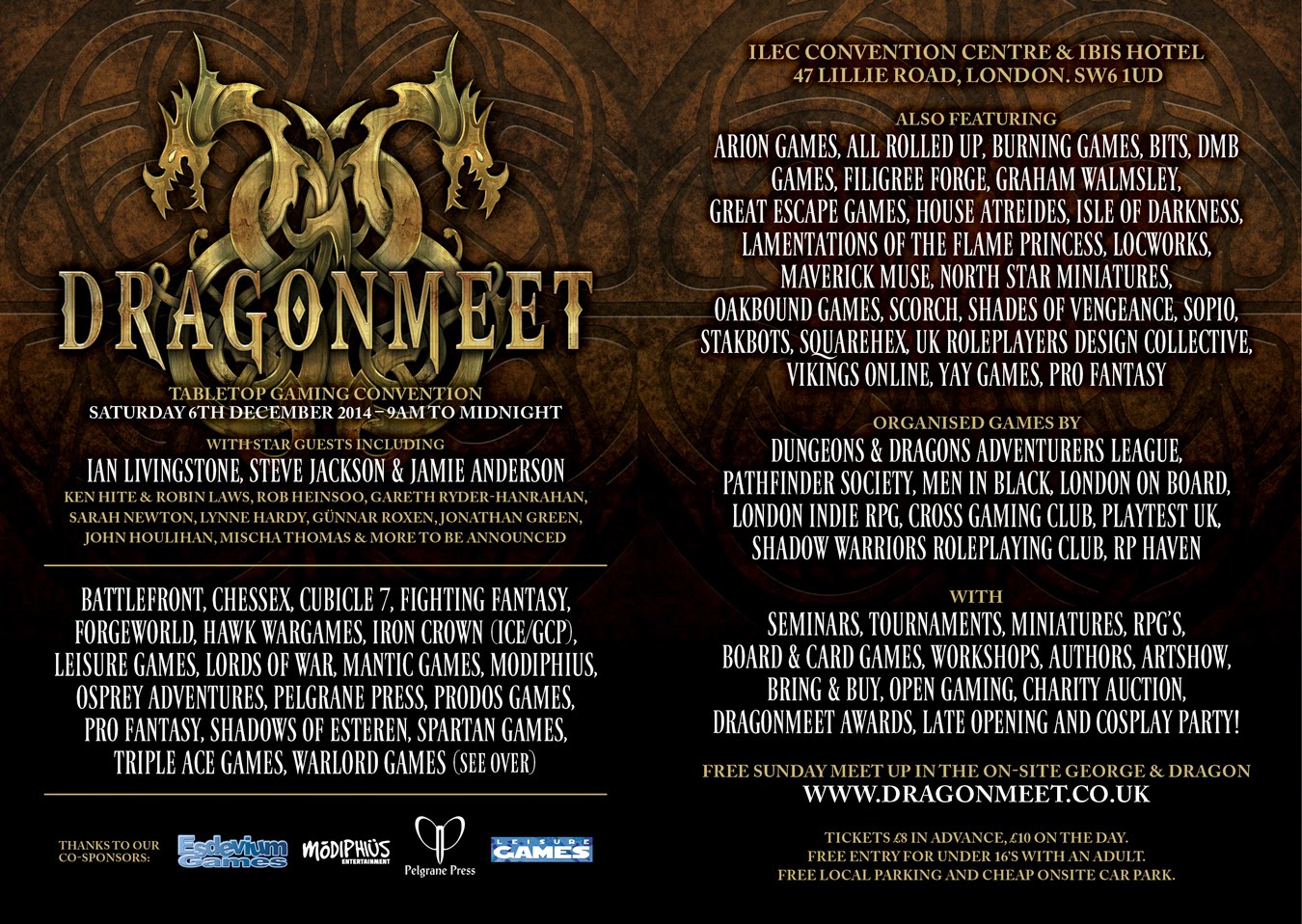