All has been rather quiet on the binding front lately... Well, no it hasn't, I'm just afraid none of it has filtered back onto the blog for a number of reasons, one being work picking up again and another being that I promised an in-depth step-by-step blog post showing going from separate booklets to the lovely, leather-bound compiled volume. That is forthcoming (honest) but is still a WIP in terms of blog post.
In the meantime though... exciting news!﻿ Well, for me anyhow. The first volume (ironically Volume 3!) is now finished! 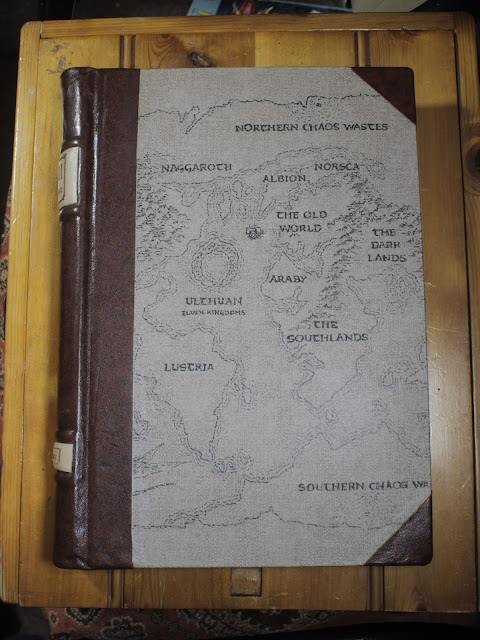 On Sunday I took another trip to the studio of the very excellent Stephen Glendenning in Frome who guided me expertly through the final stages of this volume of much-loved 3rd Edition rules.﻿ 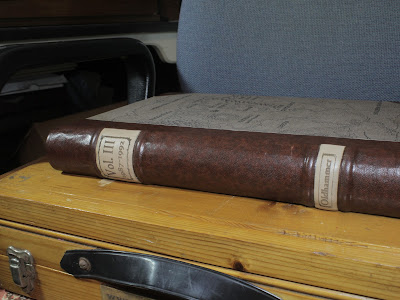 This volume was the start of this project, a falling-apart relic from my youth which I wanted to salvage and give the binding it deserved for having nurtured me through such a long period of collecting, painting and gaming. When i first met Stephen he took a good look at it and, thanks to the lousy quality of GW's binding back in the day, indicated that for him to rebind the rulebook would be a very costly piece of work. However, for about half the cost I could spend 15 hours working alongside him and learning how to bind it myself. Of course, that meant I could then do the same on other volumes... the idea for the Encyclopaedia Warhammica was born! At the same time GW blew up the Old World and began their glorious new Age of Sigmar, so this seemed a fitting tribute to the 'official' passing of the Warhammer world and system as we knew it.﻿ 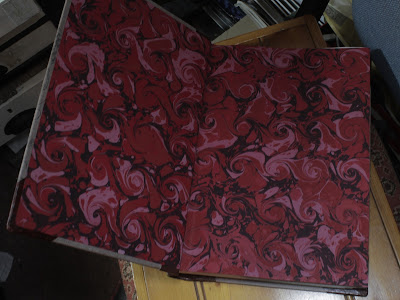 15 hours turned into a somewhat longer period. Probably about 25 hours in total were spent on this beauty, but Stephen was very good and didn't rush me or charge extra for the additional hours taking up half his beautiful studio-come-study. Even if an attempt to soak the covers off the original bookends did leave the studio smelling of fish! Not sure what glue they were using back then....﻿ 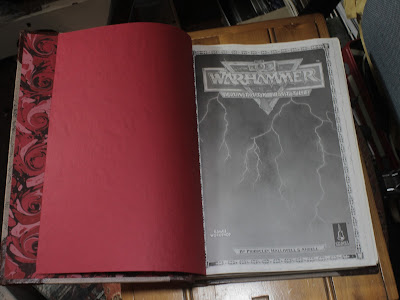 The endpapers of this book are hand-marbled (not by me!) and very beautiful. Not sure every book will get this treatment but for this special volume, well worth the extra cost.﻿ 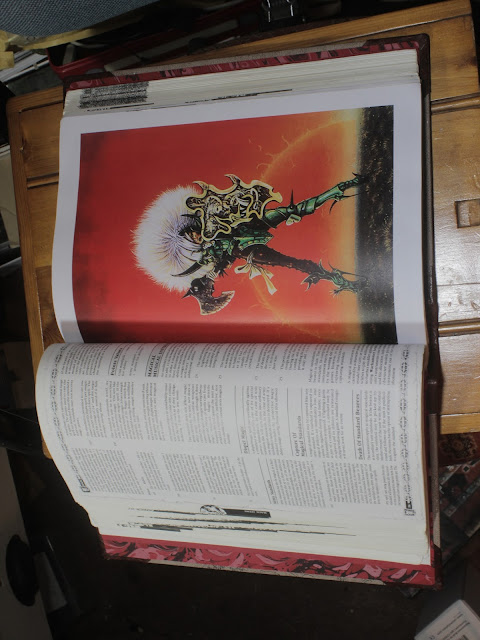 I didn't just want to rebind the rulebook as it was, so there are a few extras in here. One being a print of my favourite Blanche artwork- the Amazonia Gothique. I managed to get Tony Ackland and Tony Yates to fill in some of the Arcane Armorials from the Citadel Journals for the second volume, I wonder if John Blanche himself could be persuaded to do me a little sketch to adorn this one? 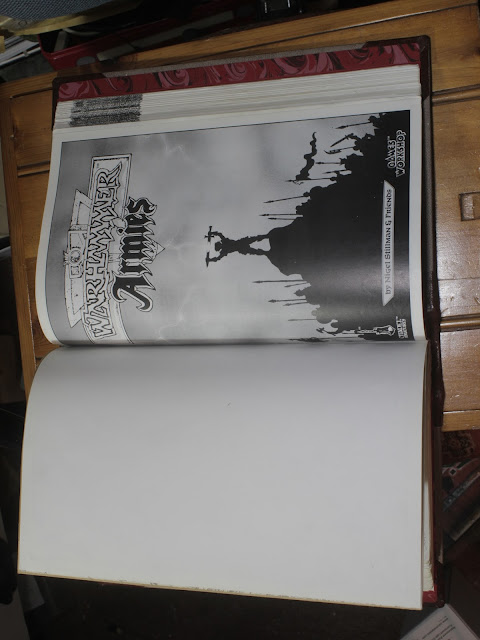 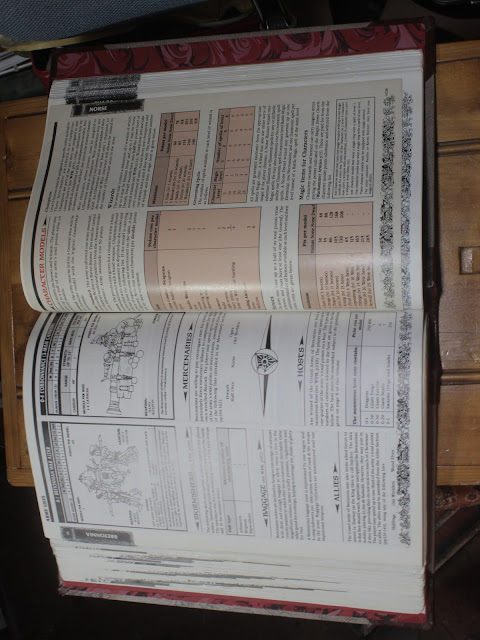 Which has had some pages from White Dwarf added to expand the available army lists, Norse... 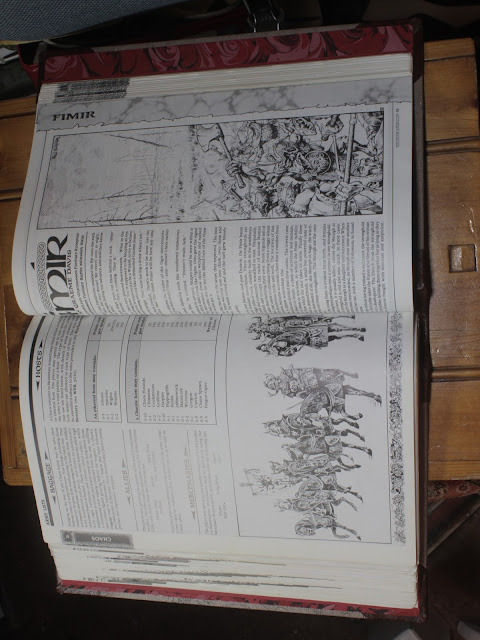 ...and of course the Fimir! I've learnt a huge amount about the construction of books in this process. And it's been very interesting comparing GW's binding through the ages. The booklets of 1st and 2nd needed dismantling and putting into gathers, the books of 3rd were individual pages that needed gathering and the books of 4th and 5th were really quick to sew into larger volumes since they were already in sewn gathers. Then at the end of 6th the army books began to be cheaper 'loose pages and glue' construction again and this continued throughout 7th. The 8th edition hardbacks are, naturally, in gathers as far as I can tell. But even that progression isn't totally consistent, since Slaves to Darkness has nice, sewn gathers and The Lost and the Damned has cheap 'loose pages and glue' binding... maybe why it's rare- it tends to fall apart! Also, the General's Compendium is different to the other 6th Edition volumes in being cheap loose page binding whilst almost everything else is in gathers. Maybe because it's an American printing? Appendix 1 (Advanced Heroquest, Warhammer Quest and Mordheim) has all these types of binding so I'm using that as the subject of the 'how I did it' post so as to be pretty comprehensive. 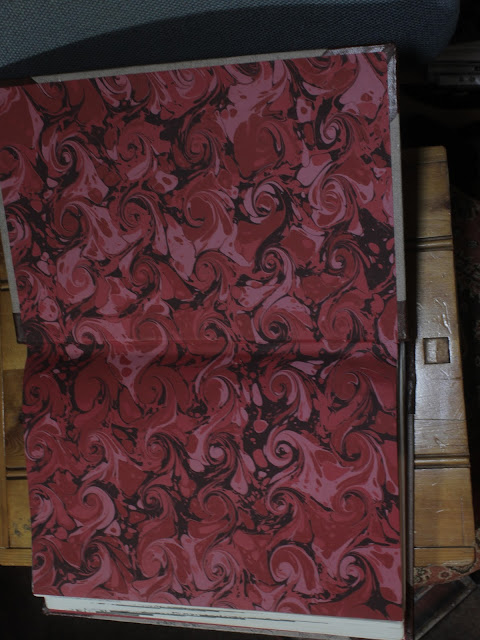 The back endpapers are also pretty! 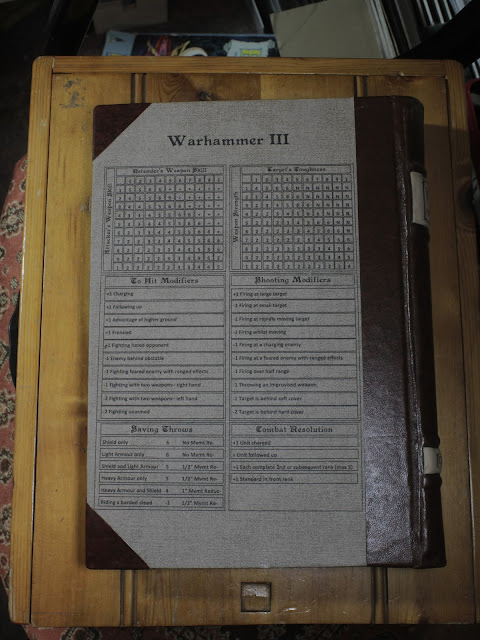 And on the back cover a handy reference table. 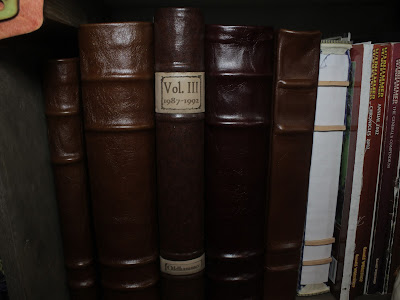 Looking good on the shelf alongside volumes 1, 2, 4 and 4a (leather bound and waiting for labels), 4b (gathered and sewn and awaiting covers) and volume 6-to-be. 5 is in the process of being gathered right now. Hopefully before Christmas the set will be complete! Thanks for lookin' and I look forward to playing as many of you as possible using my mighty tomes of reference!

Back in June, which seems a long time ago now, I got married. :) And so I moved from my lovely narrowboat (which barely fitted all my own stuff) into my wife's place. Being the compassionate and thoughtful soul that she is she has let me share her studio and I found a nice dresser to arrange my figures in to display the painted ones and inspire me to paint the unpainted ones. One day, whilst I'm away at work, I get this photo from home: 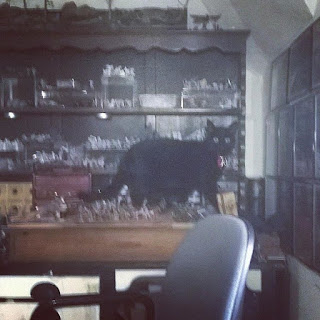 ﻿
Yes, the blurry beast has struck! It seems our curious cat is very curious about these new things in his house. Time to think again about where I store my finished toys...
﻿ 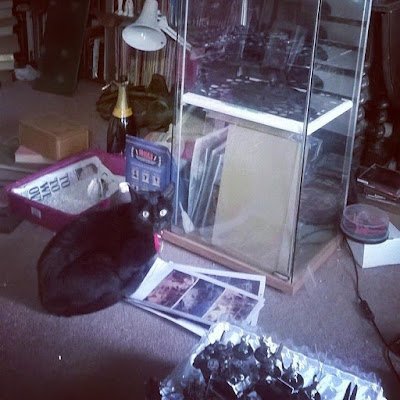 Enter﻿ the tall glass cabinet! Yes that's right Mr Kiwi, now you can't play with my painted little people. How disappointing for him. Only problem is, this cabinet only has four shelves and I simply can't fit my Fimir, AdMech and sundry other forces into it. But there is plenty of space between shelves. Time for.... dum dum dum... army display boards! Yes, the excuse and place to keep them are both now there, hussah! Priority number one, get the Fimir sorted out. Since BOYL and the arrival of Mr Saturday and Chilled Monkeybrains' heads (served in a carrier bag from a car boot by  Llamafish mwahahahaha!) I've been getting back into my misunderstood cyclopean bog dwellers and have a few new sculpts and conversions on the go for them. 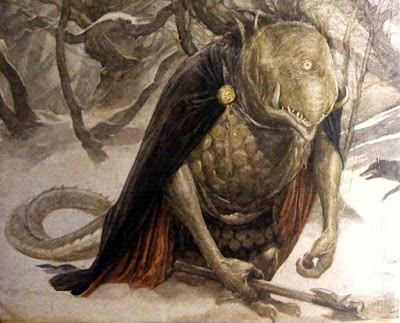 ﻿
As all good Oldhammerers and Fimir-lovers (steady!) know, Fimir have their origins in Celtic myth and this beautiful Alan Lee illustration from a book of Irish folktales. As all excellent Oldhammerers and followers of this blog will know, my inspiration for the Fimir comes more than a little from these guys:

﻿
Both the Skeksis and the Mystics from the Dark Crystal are behind my concepts of the Fimir, their back story and culture and so, obviously, their clan home has to resemble a set from the film. Ultimately their aim is to rediscover the lost castle of Chulaine which bears a strong resemblance to the castle of the UrSkeks, but for the moment Clan Myeri reside in the Valley of the Stones, Mael Fen. 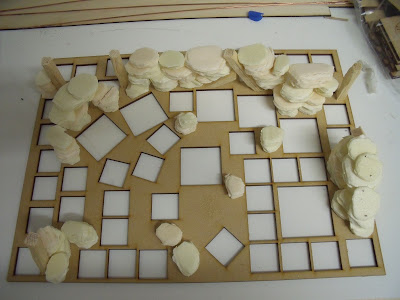 ﻿
The first step in creating my display board was to plan out how all the models would fit. I didn't want them to be too crowded, but the bases actually mean there's more space than you'd imagine looking at these pictures. I'm reminded of a Frank Oz comment about the other great Henson film, The Labyrinth, where he said that the Great Hall of Jareth resembled Swiss cheese without the puppets in as the puppeteers needed so many points of access!
I didn't want to go down the route of just sliding in movement trays as this would make the footprint of the blocks of models too big and also give a regimented look to the display, whereas I wanted the idea that this is a daily ritual in the life of the clan and they are milling around. In caste and social rank order of course, but not regimented up and marching to war. I am lucky enough to have access to a laser cutter, so getting the right sized holes neatly in the right places was quite straightforward, but even so it took a lot of planning to account for tail placement, height etc. As it is I misjudged some of the access points a bit so getting to some of the Shearl who are lurking in the cave mouths behind is quite tricky.
This was to be a three-layer board depicting the valley and the caves lining it, with the human allies clustered around the top (not permitted to be part of the ceremony) and a returning scouting party winding its way down to the bottom of the valley. The main support for each layer is in the form of 10mm square section wood, carved with a craft knife to give a more rough-hewn look. This is dressed by the main feature of the board- the stones themselves.

For the Deathrace at BOYL I made these piles of rocks from Styrofoam to give a Podrace look to the desert section. These were quite big chunks of Styrofoam, sanded to shape and polyfillered for texture. For the Valley of the Stones I adopted a similar approach, but this time used very thin slices of Styrofoam and cut them with scissors, resulting in the layered 'flint-like' look which echoes the stones on the film set. I cut oodles of them and stuck them together with PVA glue, wedging them between the layers of MDF. 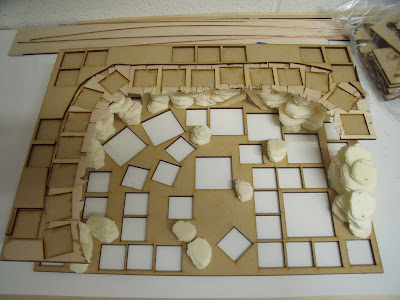 Part of the second layer represents a wooden walkway down which the returning scouts are winding, accompanied by their clan pipers. To achieve this I snapped some wooden mixing sticks (another BOYL trick- planking decks!) and glued just the very edges into the right curve on to the MDF base board. Then I used the laser to chop out the squares for the bases.﻿ 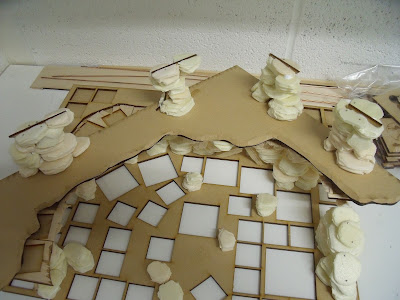 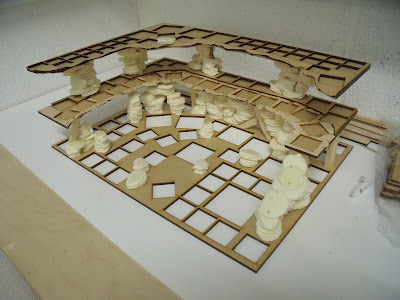 The stones between the second and third layer were done in the same way, except that I cut them in half and sandwiched sections of MDF between them to give the pillars for the third layer.﻿ 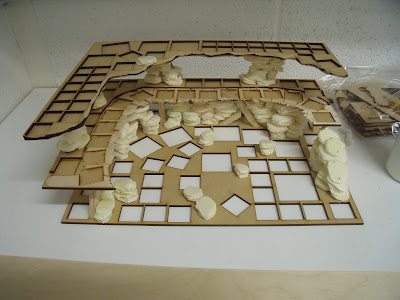 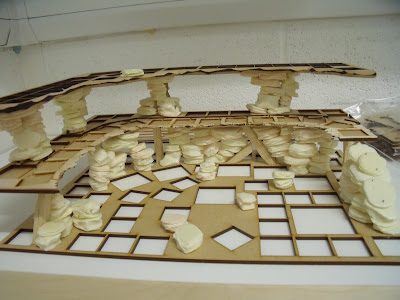 Then I used some polyfiller to texture the undersides to look like rock and fill in some of the gaps in the stones.﻿ 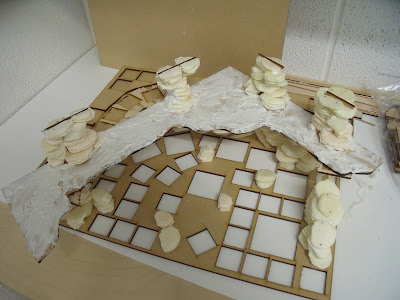 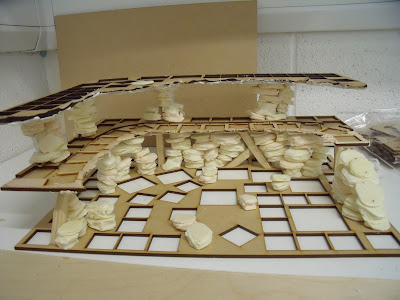 Because aerosols dissolve Styrofoam I used an airbrush to base coat and paint the board. I didn't go for too much variation in colour as I wanted the colours on the miniatures to stand out and not have the focus drawn to the board behind. The floor of the board was textured with builders' sand and my intention is to paint in the geomancy spirals which feature in the Mystics' valley in the film. A bit of interest was added by putting tufts of static grass and lichen around the rocky outcrops.﻿ 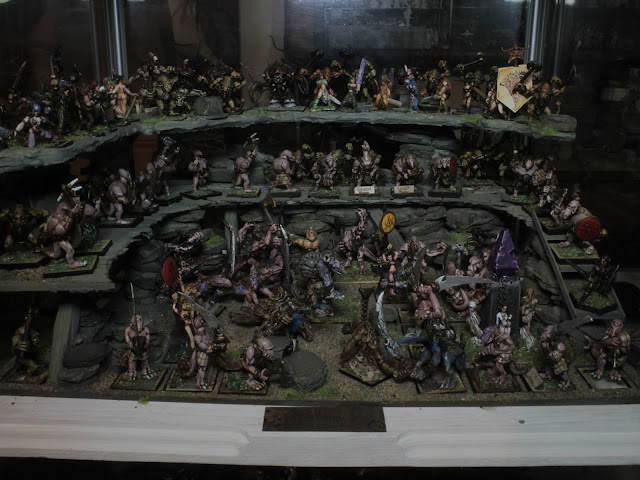 Lastly I made a plinth out of some crappy Wickes timber I had lying around from building shelving in the bedroom. With a pretty curve routered on it and a coat of white wood stain (to help show off the darker scene above it) it looks ok. The plinth slots firmly into the frame of the cabinet and the board drops into the top of the plinth and can be lifted off it for ease of removal. Sadly this picture is a bit dark, but I like the atmosphere! When I've got a few more troops to fill in the spaces I'll take some better photos.