Almost there by Easter

Well, the final 3 orcs and single goblin are on my desk, another 3 hours would see them done and all the Goblinoids deck painted (bar shields). However, in an hour's time I have to pick up my sister from the airport and then we're off on a family holiday until Monday. Rather than rush these last miniatures (which, after all, includes our two custom warlords!) I will stop here and photos of the final models will probably appear around Tuesday. In the meantime, here are some more miniatures that got painted this week: 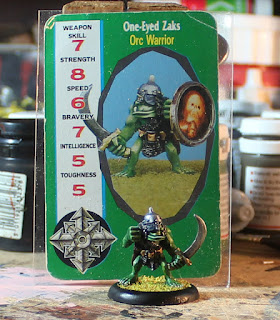 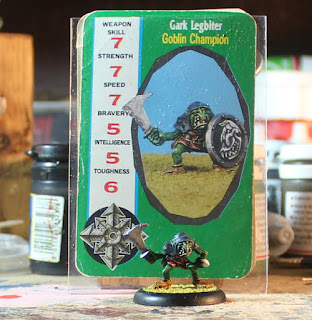 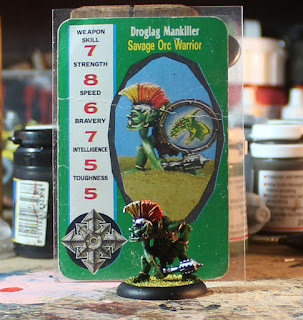 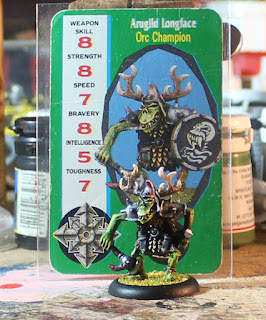 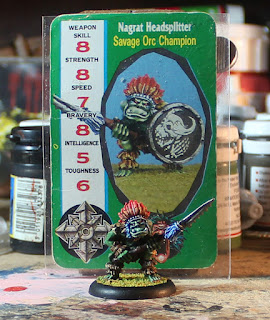 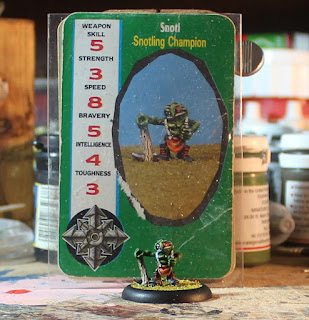 These guys got started with a bit of beach painting in the glorious sunshine last weekend, but I didn't get much beyond base coats there are the paint was drying far too fast! Managed to get away without sand on the models but some of the card sleeves I'm using to protect the cards from paint splashes got a healthy dose of grit in them!


And, because I'm sure you're keen to see how Ulg and Grubod were looking yesterday afternoon... 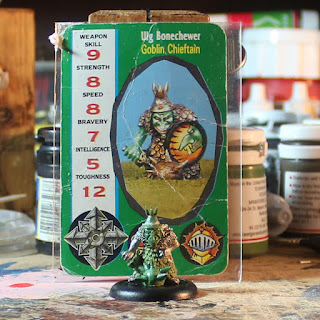 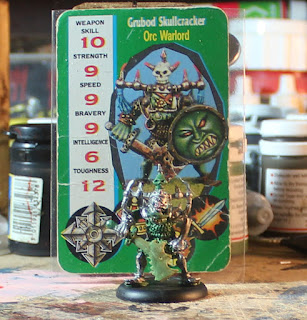 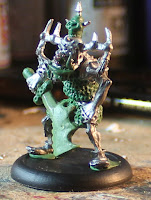 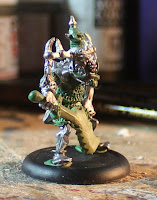 Almost there by Easter

Back when I was a kid and had lots of time and no friends I used to organise my Combat Cards into rival factions to battle against one another. This is how I will be displaying my finished miniatures in the cabinet I have just finished making for them. The main protagonists in this saga were the two Orc Warlords, Nabrat Twocutters with his armoured orcs and Grubod Skullcracker with his royal orcs.
﻿ 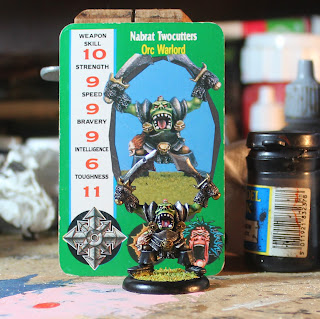 Nabrat is the leader model from Ruglud's Armoured Orcs. As the story on the box narrates, his armour is straight off the back of a dead chaos warrior. Look at the plates on these guys, dead Slambos and HQ warriors most likely! Now there were incarnations of Ruglud's after this, but for me this is the definitie look for the Armoured Orc. 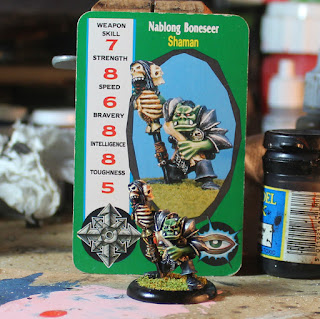 Nablong is also from the regiment of renown, but there he is a musician not a shaman. I feel he fits better in a magical setting though, using the looted bones of the fallen chaos warriors to commune with nameless horrors. 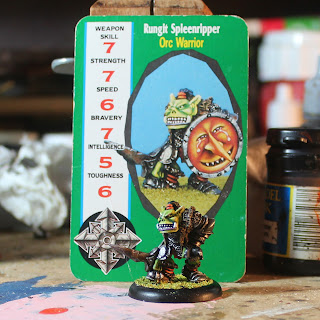 Rungit gets to be in this group because of the stylings of his arm armour, although it will mostly be hidden behind the shield. I'm still in two minds whether to sculpt a nose on the shield or to paint in trompe l'oeil. I can't tell from the photo, does anyone have any pics of this model from a different angle? At the moment I'm leaning towards a paint effect. 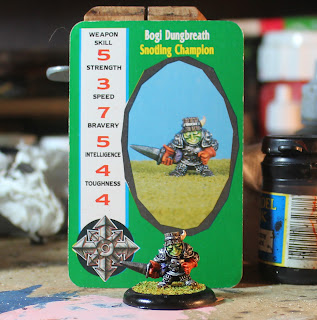 Ah, Bogi. Another 'rare' snotling double that I paid too much for after years of scouring ebay. Totally worth it though, this little guy is so cool! Where he found chaos armour to fit him we can only guess but I can easily imagine him capering after Nabrat as an annoying yet loyal sidekick/pet/lackey. 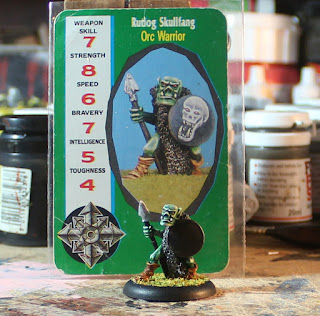 Rutlog is probably the oldest model in the deck, being a 'slottarised' Fantasy Tribes orc. He was very difficult to get looking good and I'm not entirely happy with him as his chainmail and face don't seem as detailed as the card model. 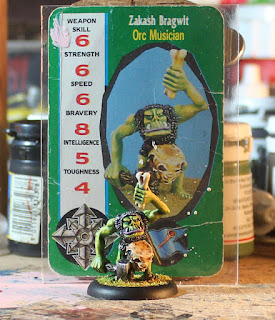 Another case of flayed snotling appears on Zakash's drum, not readily apparent from the card but the tiny feet nailed to the back of the drum make it pretty plain this isn't a carved wooden instrument! 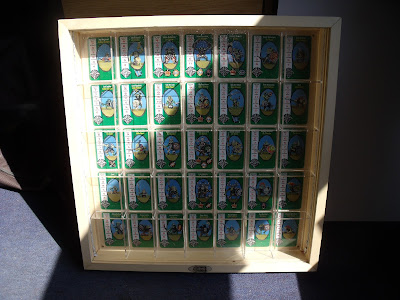 And here's the case I've made for them. Excuse the sunlight and wood dust, only just finished it in this pic. It will, of course, be wiped down before I populate it. 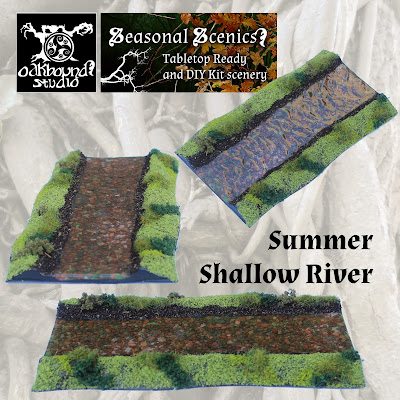 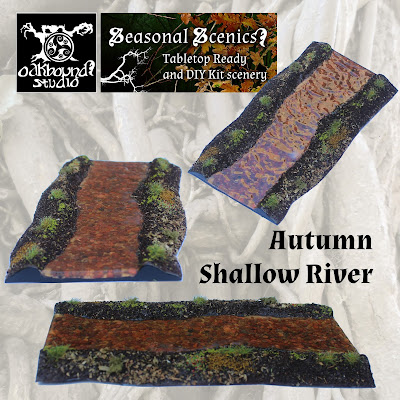 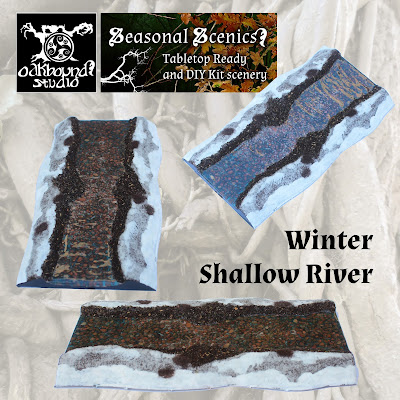 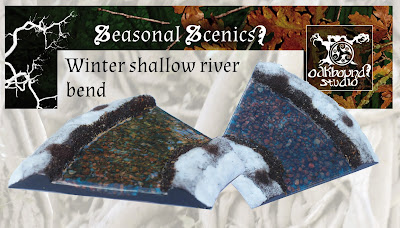 A productive weekend of painting has seen another 5 greenskins join the ranks. With 19 now done that's just over halfway (since a lot of shields are currently outstanding let's call it halfway). Here's a rundown of the latest recruits:
﻿ 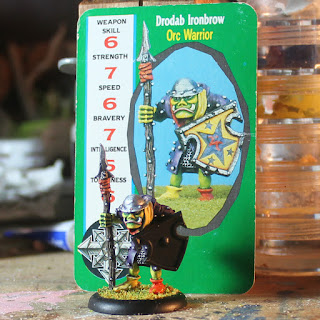 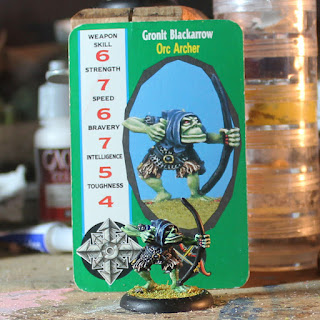 Gronit Blackarrow's an interesting one. This guy originally came with fangs, which I trimmed off, but painting the face I noticed his jawline is definitely more curved than the model on the card and the hood of my figure seems to creep further across the face than on the card model, obscuring some of the cheekbone. Another variant model lads? 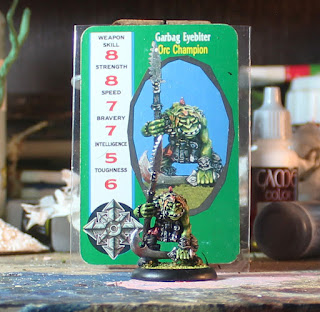 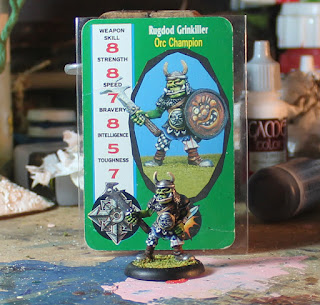 Garbag has probably been my favourite to paint so far. One of the most 'orcy' models going and a joy to discover all the little details not seen on the card. For example, the tiny hands and feet of the flayed snotling he's wearing as a hat. I'd always pondered whether he was wearing a face on his head or just a tatty hood, now I know. Rugdod is missing his shield as I've run out of big shields again, boo. Another call if anyone has spares let me know, otherwise I'll be press-moulding next week to finish off the set. I think I need 5 or 6 more 16mm 'fighter' shields. 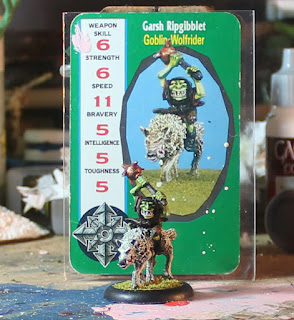 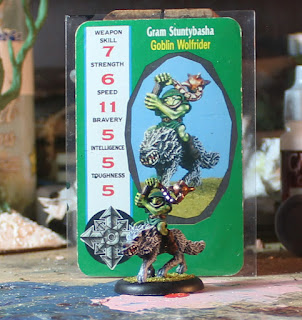 Yay wolfriders! Kev Adams' wolves are such a joy to paint. These were a simple base coat, wash, 3 successive drybrushes and a bit of detailing. The goblins are also quite basic paint jobs by the standards of the rest of the deck, so all in all a bit of a light break. Another mystery solved here. Garsh's wolf on the card looks like he has a ring by his muzzle- a bridle of some kind? Was he an unlisted chariot wolf? Well, no. It turns out from looking at the angle that what looks like a ring is just a combination of teeth. 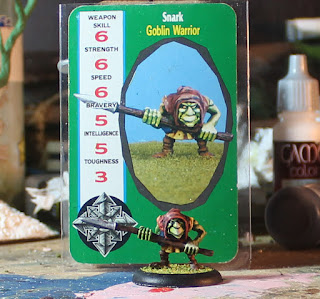 And Snark. A lesser goblin if ever there was one. Quick painting here, but a surprising amount of sculpting to do. The model on the card has a far more prominent chin and jawline and a smaller cowl than the model I had in hand, but surely converting/building onto this model would be going to a silly extreme for a mere goblin? Maybe a clue to the solution lies with something I noticed on my model- big cracks in the cast. You can actually see on still there at the top of his left arm, I decided to leave it since it seems the model on the card has a matching fault. Mine also had a big crack across the nose which needed rebuilding. If the original had facial disfigurement as well then it would have needed similar reconstruction, hence the differences in features. Anyone shed any more light on it or have a variant of this model?