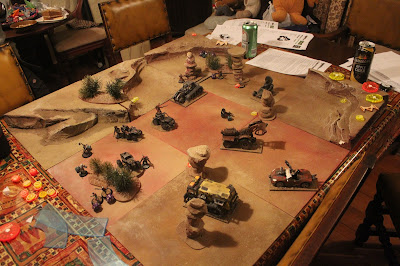 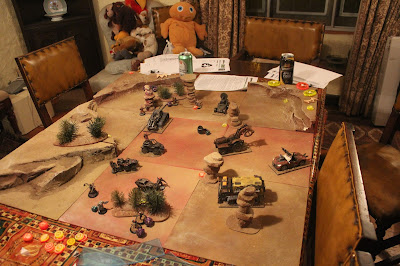 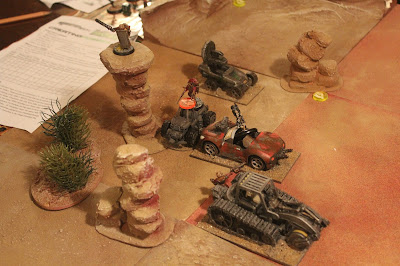 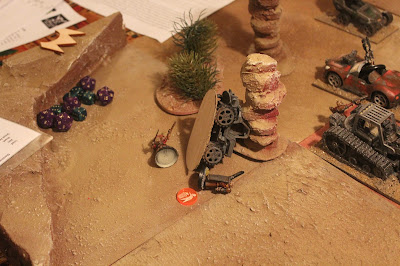 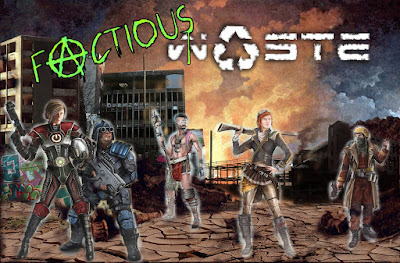 If you've missed the times when I've harked on about Factious Waste in the past then you might not know it's a near-future, post-apocalyptic dystopian skirmish game set in a world depleted of natural resources. Tyrannical energy companies and the recycling mob vie for control of the desolate 'outworld' where the majority of humanity slaves on the treadmills of industry. Revolutionary luddites try to bring down the corporations, deluded neoprimitives take a stand to protect an ecosystem which was destroyed long ago and deranged desk cops from privileged inworld stomp out crude law enforcement amongst the barbarous desert.

It's a game that's been 5 years in the making and is finally reaching its destination thanks to the work of some fantastic artists. Tony Yates and Carl Critchlow will be familiar names to you I'm sure, but also check out the work of Mike Tenebrae and Simon Lee Tranter, it's epic stuff. 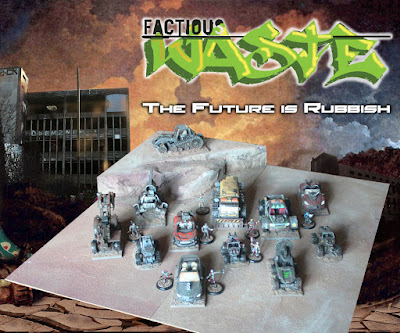 The core rules have been in place for a few years now (they were also bushwhacked for the celtic fantasy world of The Woods last year, but they started off in FW) but the game was lacking something very important- vehicles! You can't have a Mad Max, 2000AD-inspired game without some cool wheels. The principles I wanted to use for vehicles in the game had been around for a while, I just hadn't got round to fleshing them out. A couple of trips to pound shops earlier this year, some bits courtesy of Fox Box and Ramshackle Games and that has been rectified! The dirty dozen are now ready to go prospecting for that all-important trash running contract! 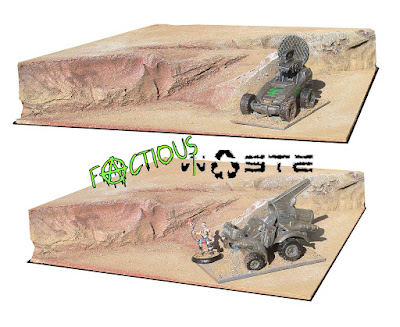 Airjunkers are primitive vehicles, usually nothing more than a big fan strapped to the back of a gutted derelict. They're slow, noisy and they drink fuel but they're relatively manoeuvrable and cheap. 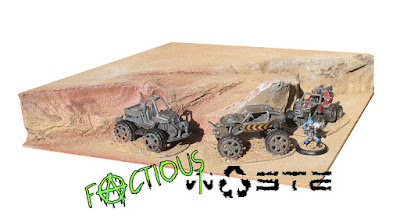 Buggies are the most common wasteland vehicle. Their lightweight frames and large engines make them nippy, manoeuvrable, fairly fuel-efficient and good platforms for mounting weapons of various kinds. 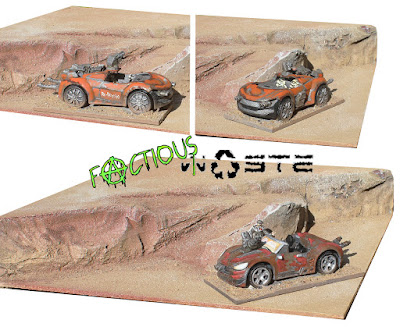 The flashy members of the recycling fraternity like to flaunt their wealth in souped-up sports cars, especially the frat brats- spoiled children of the dons.
﻿ 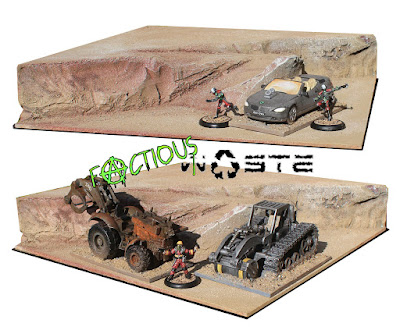 VIPs of the Genpower corporation also ride in style, though with somewhat more elegance than the brash frat. Then there are the industrial vehicles to be found scattered around the wastes. Tracked and wheeled earth movers, dumpers and construction vehicles are easily appropriated as slow but powerful workhorses for wasteland posses. 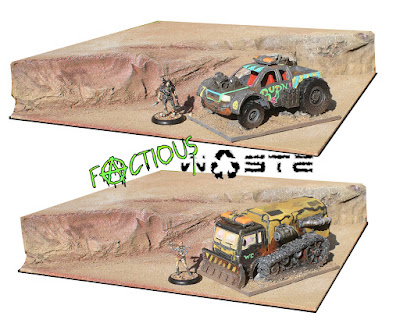 For Trash Runners themselves, the Han Solos of the wasteland, their vehicles are their livelihood. Each is intensely customised and personalised to the style and work of the Runner they serve. Big rigs haul enormous loads of scrap across the desert, escorted tankers guard precious fuel cargos, flatbeds serve as mobile platforms for crews and gear. 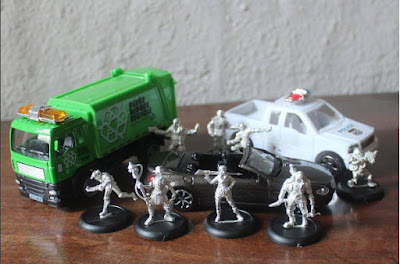 These vehicles started out as matchbox and '1:43' (apparently) scale vehicles from pound shops, with bits from Ramshackle, Fox Box and GW imperial vehicles added to them. Many of them had their wheels replaced with those from tractor models bought from pound shops, enlarging wheels is my number-one priority for wasteland transport! The sizing's pretty good, even if some of the cars are a bit on the chunky side- that just helps the comic book feel. The detail's not bad either and I was delighted to find that poundland had a skip lorry and a rubbish truck (still WIP at the moment) in the right scale- perfect for a game of scrap hauling! 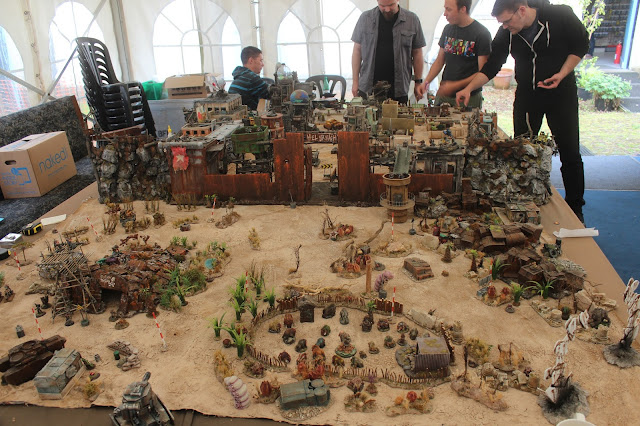 Upon walking into the marquee at BOYL and seeing this... how pleased I was I had pulled out the stops the day before and painted the first 8 masters I just had back from the caster. I couldn't resist grabbing some shots in front of Curtis and Aidan's spectacular terrain.﻿ 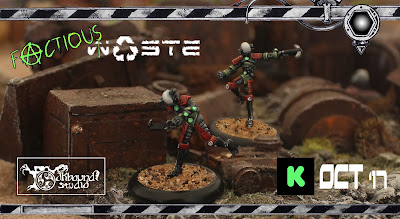 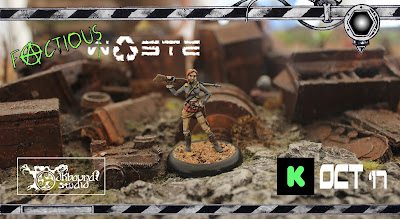 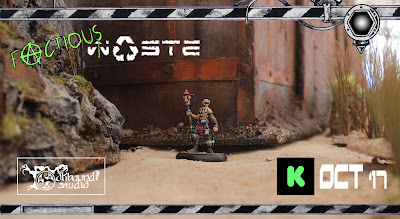 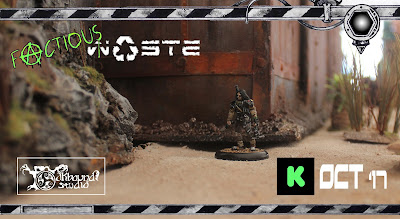 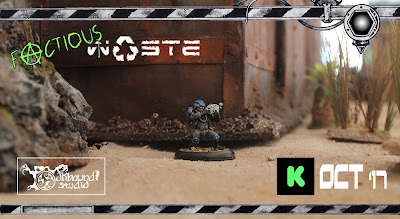 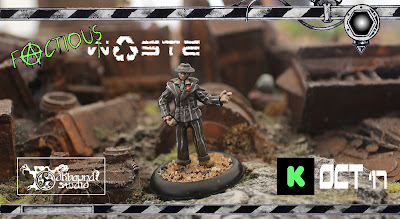 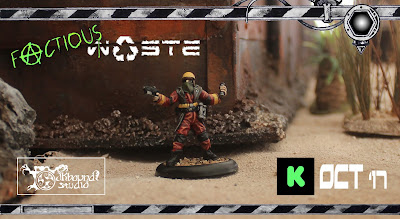 It was also a joy to see Tony Yates again. Tony did a lot of concept art for this project between November and January of this last year so a fair few of the models are based on his awesome work. He snapped this shot of me holding a Trash Runner which is pretty much a direct sculpt of one of his characters. The large 'doughnutter' enforcer and lithe Gencorps agents are also based on characters we developed together. 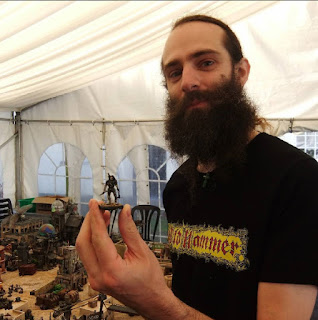 Stupidly I didn't snap a shot of Tony with this guy, but I did have a spare set of the masters for him so we may yet see his art on top of a miniature based on his art! To demonstrate what a gent he is Tony had a surprise gift for me... 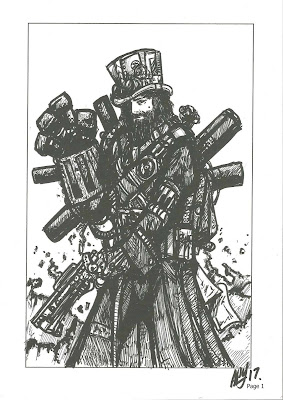 See any likeness there? Perfect artisan character for the next lot of Factious Waste sculpts. Factious Waste is on track for an October Kickstarter release, stay tuned for post-apocalyptic mayhem...