A while back now I promised some people I'd do a step-by-step of how I'm binding together my Encyclopaedia Warhammica. I decided to pick the first Appendix for the task, not because I've got that far (nowhere close yet) but because it includes all three of the types of binding used by GW's publications. Since there's a lot of steps and pictures this will probably take two or three parts, but rather than delay further I thought I'd make a start and post up to as far as I've got with this volume.

The contents of this volume were probably some of the hardest and most costly to get hold of, so my thanks once again tot he wonderful Oldhammer community of the Oldhammer Forum and Facebook pages who were incredibly supportive and generous in supplying some scarce material. The table of contents runs as follows:

The original plan was to have these games set in the Warhammer world spread throughout the core volumes (AHQ in the back of the 3rd volume with WFB3 and Armies for example) but the differences in page size and booklet construction meant that wasn't working well so I decided to collect them into two appendices, this one (Quest) and one with Mighty Empires, Warmaster, Man 'O War etc. (Campaign). I decided to stop rather than try to get hold of the collected Town Cryers and Empire in Flames as they're rather too expensive for my tastes, maybe as a further appendix later on if I win the lottery. I have been humming and hahing about including Heroquest with these, using PDFs of the quest books to turn them from A5 into A4 pages. I decided against this as the print-it-yourself paper never has quite the same look or feel. I may yet bind the HQ stuff together in an A5 volume, but am concerned that the loss of the inner margins that comes with hardback binding might mean that GMing with the result would be difficult. Anyway, enough about content, let's look at what to do with it...

Pretty much there are three types of binding you find in GW publications. Let's call them the good, the bad and the ugly! 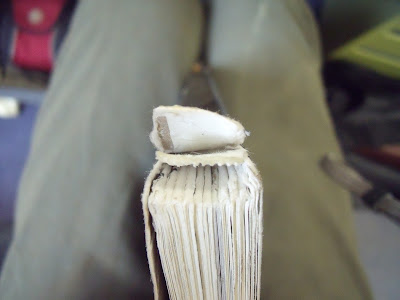 Mordheim, City of the Damned! Beneath that grimdark exterior lurks a thing of joy... Yes, the Mordheim book is collated in sewn gathers. In this instance that's four sheets of A3 folded in half to give a 'gather' of 8 leaves (16 pages). The next gather has the next 16 pages etc. etc. until the end of the book is reached. These are then punched down the middle and sewn together to form the book. Since what we want to end up with is exactly that then these are super-easy and quick to disassemble and prep for binding. 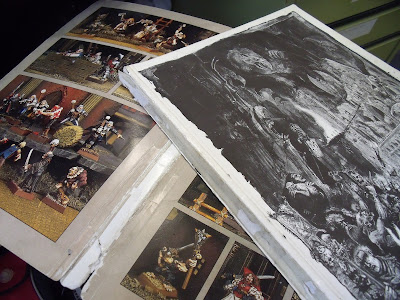 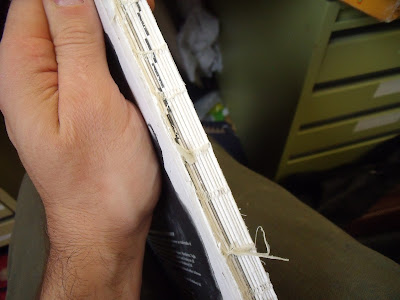 Cut the threads holding the gathers together and remove any remaining glue and thread bits from the pages. Job done!

Most GW books from 4th through to 6th are bound this way, so that section of my project has gone pretty quickly. The exception is the shorter booklets (we'll come to later), the US-bound General's compendium and the later 6th Armies books where they went back to the BAD method (despite bumping the prices up!)... 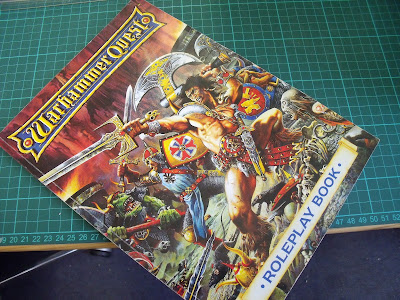 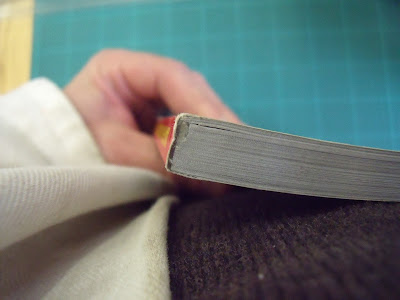 A close look at the spine reveals that this book is cheaply bound- it consists of loose pages simply bundled together with a crap load of glue shoved onto them and then a cover pressed onto the outside. 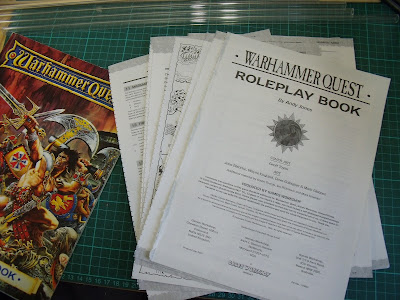 Getting the glue off is no problem (cheap binding!) but now we have a lot of work and a few issues ahead of us. The pages need to be turned into gathers by gluing an additional strip of paper down the edges, but this means each page is essentially two pages' thickness- making the gathers thicker at the spine end than the page end. We'll look at overcoming this at a later point. 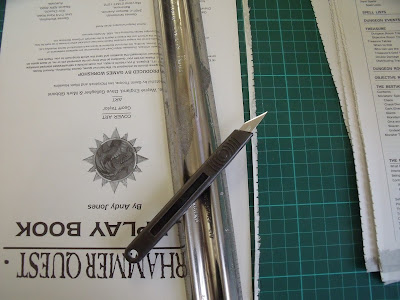 The first thing I do is to remove the very edge of the pages that were glued into the spine. Two reasons for this. 1) The perforations and glue on the edge would make the gathers lumpy. 2) When we glue the strip along the centre we need to give a 2mm or so gap between the pages to sew through and in a volume like this than consists of a mixture of Good and Bad previous bindings this extra width on the Bad gathers would mean an uneven page width across the whole volume. 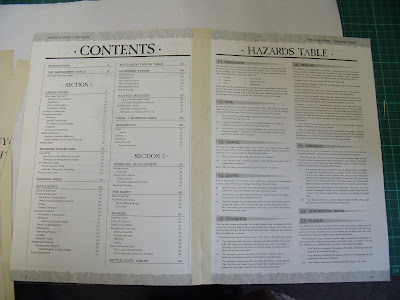 Next sort the loose leaves into gathers. Since GW publications (I can't speak for others) use a gather size of 8 leaves (16 pages) I've kept to the same as much as I can. So this first gather consists of pages 1-16. These need to be glued into 4 double-page spreads as in the photo below: 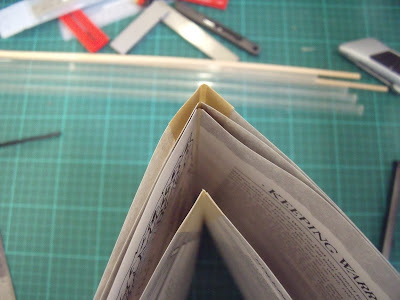 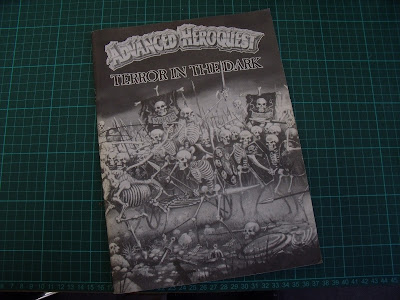 Terror in the Dark is magazine stapled, as are most of GW's thinner publications. This requires a hybrid of the previous two methods in preparation for binding. Some very slim magazine publications may be suitable for sewing in as a single gather, but anything over 10 leaves is going to be too thick, and this is well above that so is going to need to be taken apart and reassembled. With a piece of GW literature that was this hard to acquire and fairly costly I was a bit daunted by this one, but it actually went quite smoothly and took just under an hour. 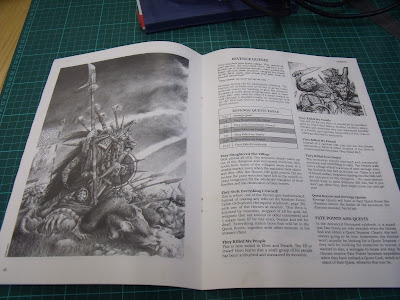 Here's the good part. Once the staples are removed from the centre you can keep the inner 8 leaves (16 pages) and they'll form a ready-made gather. 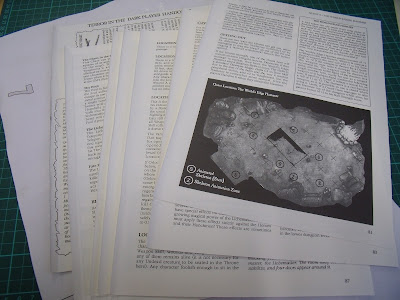 Then, carefully, scalpel down the centre of the remaining booklet to slice it into loose leaves. These need to be collected together into gathers in the same way as with the Bad binding above. 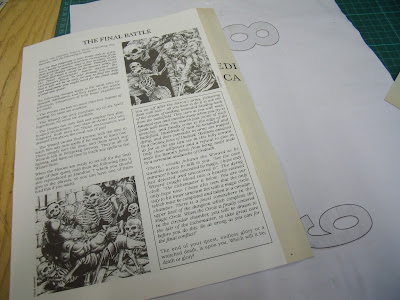 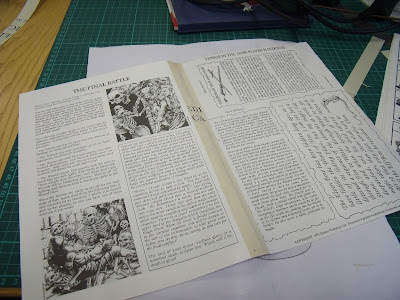 This booklet doesn't divide neatly into gathers of 8 leaves (16 pages) so I've gathered it into three 8-leaf gathers (the outer two and the centre) and four 6-leaf gathers (two either side of the centre). It doesn't matter too much if you have inconsistent sized gathers but you want to try to be as consistent as possible as where the thickness at the spine lies will affect how the binding looks. 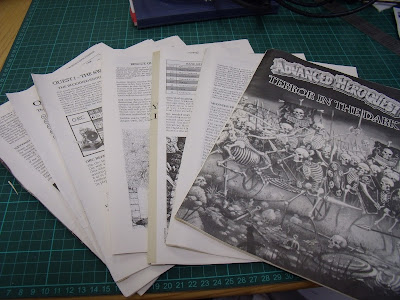 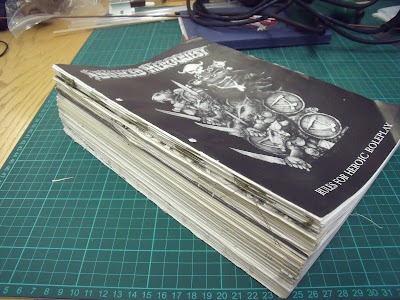 It looks pretty chunky, but once sewn, glued and pressed I reckon this lot will condense by about a third in width. It's amazing how much loose paper compresses during the binding process! 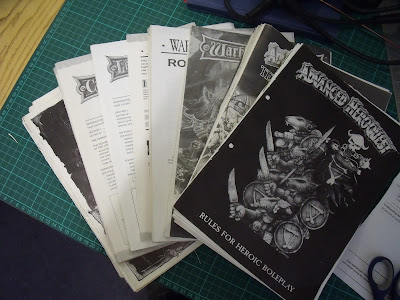 Ok. Next it's sewing and gluing time, but I'll save that for another post. :)