Friday Night in old Vogen Town, and the gangs come out to play!

Photos from the weekends' Necromunda battles. Four newbie gangs started off their careers in the locked-down district of Golgotha Tenement, Vogen's overpopulated Hab Blocks, under the wacthful eye of the local enforcers. My own gang, The Merciful Sisters, fared fairly badly at first, losing one gang member and having two (including the heavy stubber) captured at the end of the first fight. Fortunately they managed to buy back the hostage ganger and made a successful rescue mission to reclaim The Nurse, with her vital heavy weapon The Doctor. Still lagging behind in gang rating, by the end of the weekend the Sisters saw two of the starting Juves become fully fledged Gangers with a nice assortment of close combat skills and another Ganger purchased to replace the three fallen members of the gang. They fared much better than the Goliaths, who had a brilliant starting game thanks to the successful placement of their Autocannon (!). Sadly a few bad rolls in subsequent games saw the Autocannon's high price tag take its toll as the small gang lost crucial numbers leaving them with a highly-upgraded leader, super-shooty heavy and very lucky juve... and no source of income. It will be a slow climb back for the boys...

As the Orlock heavies emerge from vents on top of the precinct building the Arbites rush to apprehend the trespassers.

The next morning the rescue mission begins as a group of the Sisters try to free their captured heavy who waits imprisoned above in the Goliath headquarters.

Meanwhile, the other side of the river, Cawdor and Orlock gangs fight for the loot left behind by the riots.

The Goliaths invest in professional help to try and reclaim some stolen booty. The Bounty Hunters move in.

The Sisters on an urgent mission to rescue Grandpa Max.

A few months ago, bitten hard by the Necromunda bug, I bought a boxed set off ebay. This is the game released when I bought my first ever White Dwarf (190) and is a massive part of my gaming heritage, but I've never owned the boxed set before. Now I get the chance! The guy to blame is not strictly (as you may imagine) Mr Chico, although he didn't help cure the urge with his lovely and prolific gang-building achievements. No, the guy to blame is this chap:

The guy on the left. Found him at a second hand shop and thought he was the coolest model I'd seen for a long time. But what to do with him? Maybe this was an opportunity to dig out those broken space marines I got off ebay... and turn them into this:

Has it been done before? Probably, but who cares, I'm doing it now! A squad of Arbites to use as referee's forces in our 40k campaign. But what rules to use? A bit of digging later and the can of worms has been opened.... Munda I up with these guys in the lead!

Of course, many people reject the boxed card buildings in the Necromunda box and use the bulkheads to build their own, rather more sturdy-looking scenery. And who can blame them? But for me these buildings, springing from the pages of White Dwarf, are inseparable from Necromunda. I could not play without them or commit the sacrilegious act of throwing them out and using the bulkheads for something else. No, the quest was on! To prove that these card structures, thin and flimsy though they are, could look impressive on the industrial gaming board....

I began by cutting card RSJs and trim to go around the underside of the edges to disguise the thin-ness of the floors. Then I painted the bulkheads (simple spray base coat, liberal washes and detailing picked out in brass), assembled the buildings and glued them onto MDF bases. The buttresses were made to look a bit more substantial by edging them with drinking straws cut to size, slit to fit over the card, doused liberally in superglue and painted metallic- a right pain in the arse! Looks good though. Then smothered the base in builder's sand, painted black and drybrushed. The walkways all got reinforcement and some clear acrylic and drinking straw barriers to tie them into the two ruined city boards they would be placed on.

A few of the buildings got special additions. A pringles tube fitted nicely down the middle of the two-tier building to form a lift shaft. This and the tall building got LED lighting added. Whilst I was sprucing up card buildings I did the small tower and landing pad from the old Trinity Battleground game (which was my poor-man's Necromunda as a kid and which I regretfully got rid of most of). All the electrics are connected by 9v battery snaps which attach to several running through the city base boards. I'm also planning a portable power plant for running buildings not within cable's reach of the city boards.

A couple of scratch-built and recycled-junk buildings got added to the pool. the most complicated being 'Golgotha Tenement', also known as 'The Pit', my gang's headquarters, based on the building and night club from the film The Crow. Still needs more graffiti adding.

The whole board was then liberally smattered with propaganda, band and revolutionary posters I found on the internet, scaled down and printed onto sticky-backed paper. Wanted to give it an 80s punk feel. More graffiti definitely required, but I'll have some paint pens on hand at the weekend so all the attending gangers can add their own contributions.

Since there's no way all this scenery would fit on the city base boards I used some scrap bits of wood to make a set of small modular tiles which could be put together in any configuration around the boards and provide flat but textured space for the buildings to sit on. Because I wanted them to continue having a ruined city look I made sure each had a section of plain, flat ground 9mm above the square of chipboard which made up the tile. All other terrain features lie below this level so the tiles can have interesting bits and pieces on them without impeding building placement.

Finally I decided I wanted some water in the game so made three panels of murky harbour based on the film City of Lost Children. There are bollards poking out of the water for features to sit on and I put together an observatory (courtesy of the Christmas Pudding bowl), harbour bell and bridge (with three variable lengths to cross different stretches of water).

So there we have it! A substantial amount of scenery on the very-cheap but occupying most of my holiday! And here are some pictures with my Escher gang (courtesy of the lovely Igirisujin), the Arbites and some civilians to play character roles in the scenarios.

The girls (and guys) of the Sisterhood defend Golgotha tenement from an Arbite Sweep-and-clear.

The Arbites hold a riot back until the cavalry arrive.

Judge Johnson surveys the carnage he has initiated.

Old Man Maxwell and Sgt 'Offworld' Slater do their rounds of the tower.

My nearest and dearest got some custom sculpts, which were cast up by my friends in Birmingham and painted by yours truly as unique Christmas gifts, lucky them! A number of these sculpts will be among the next release from Oakbound Miniatures. 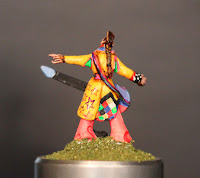 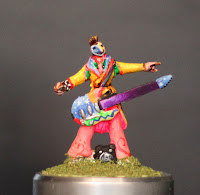 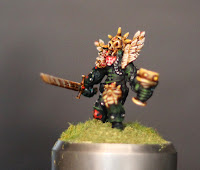 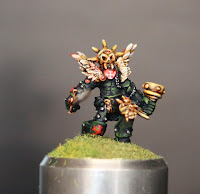 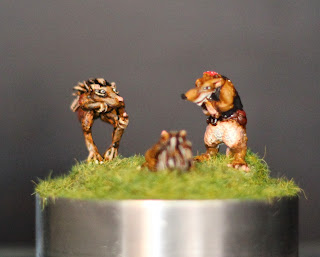 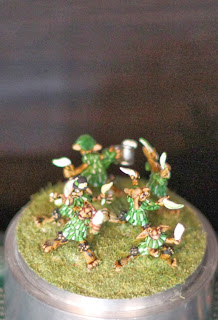 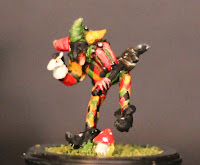 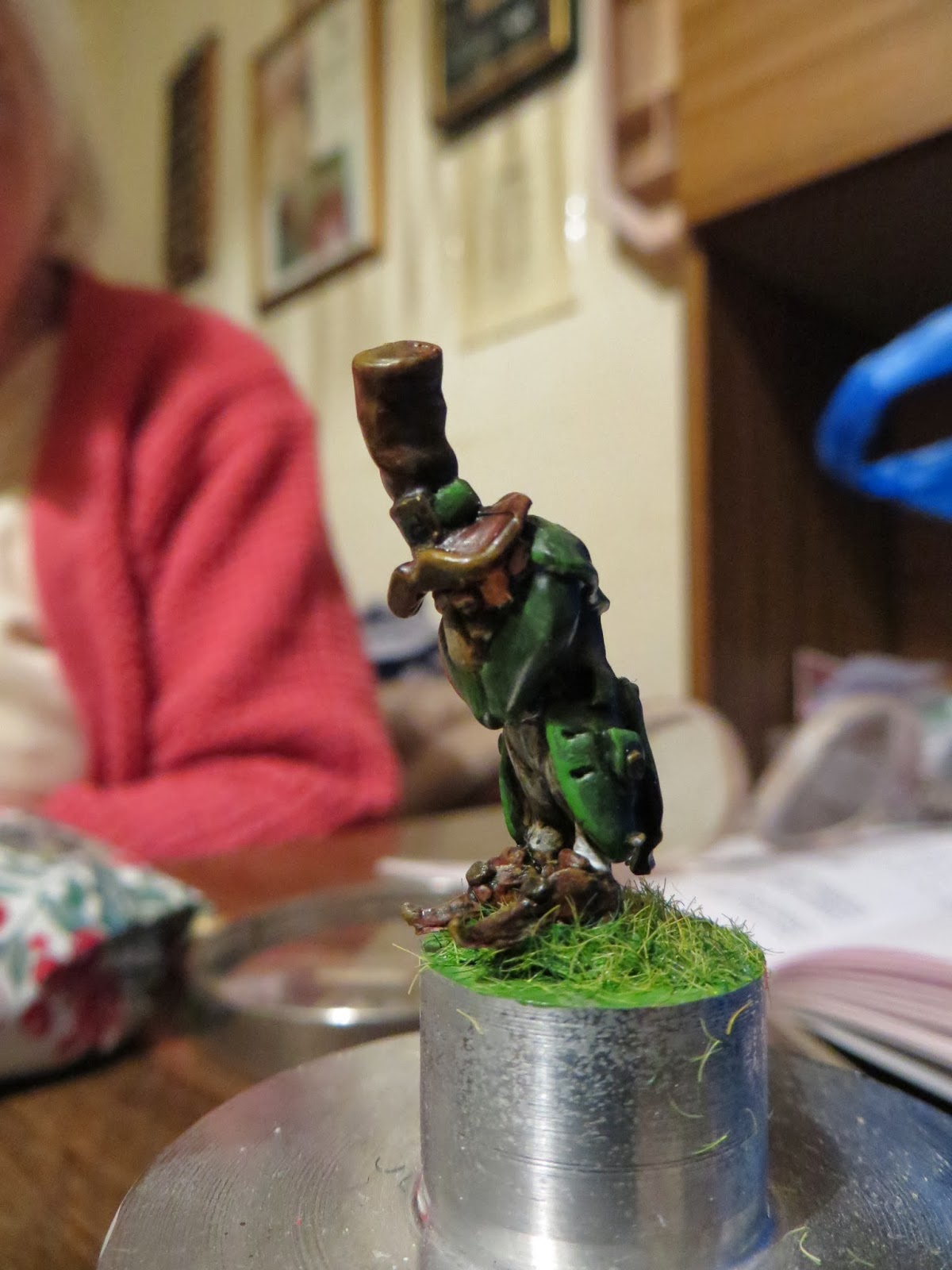 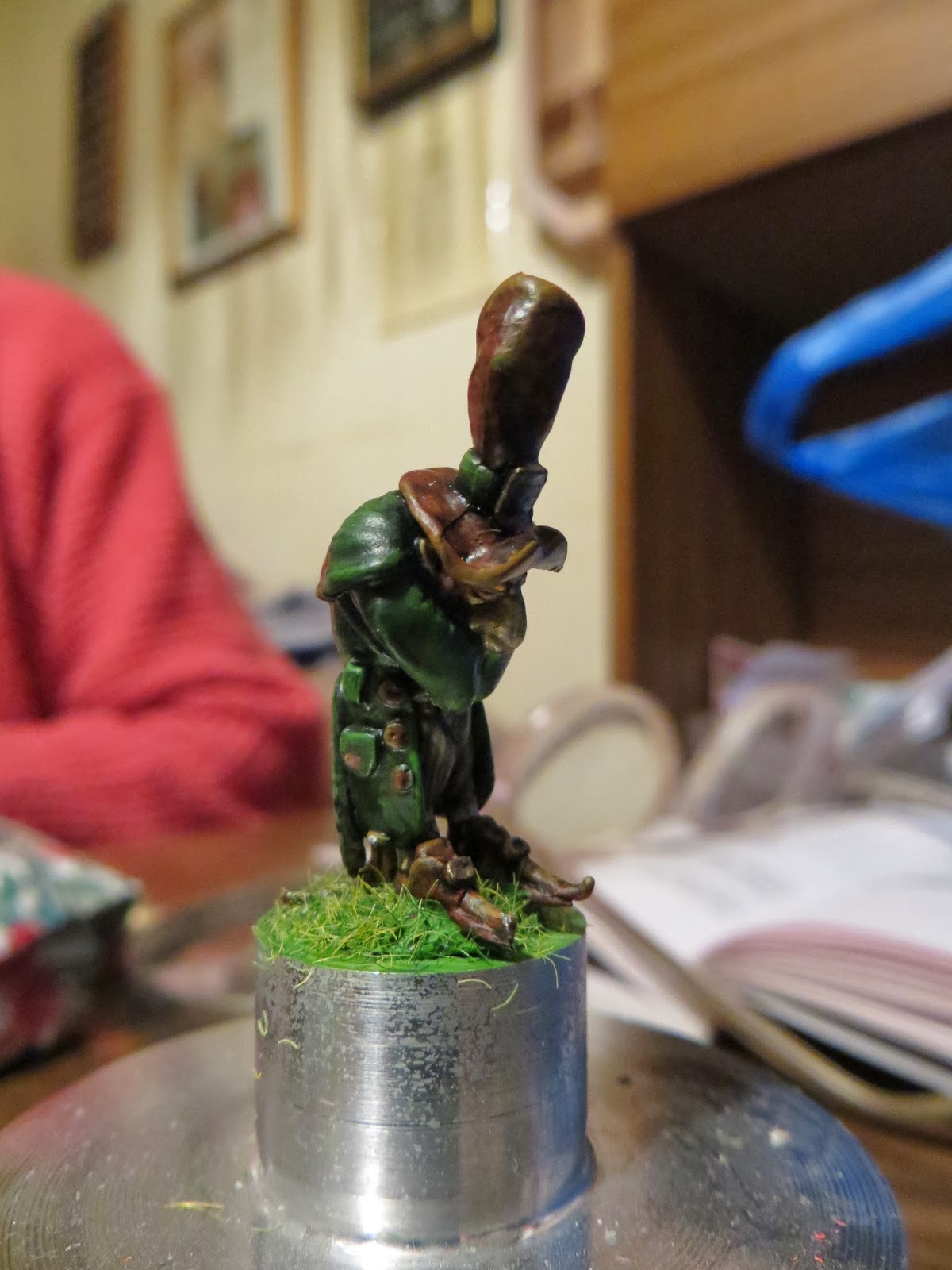 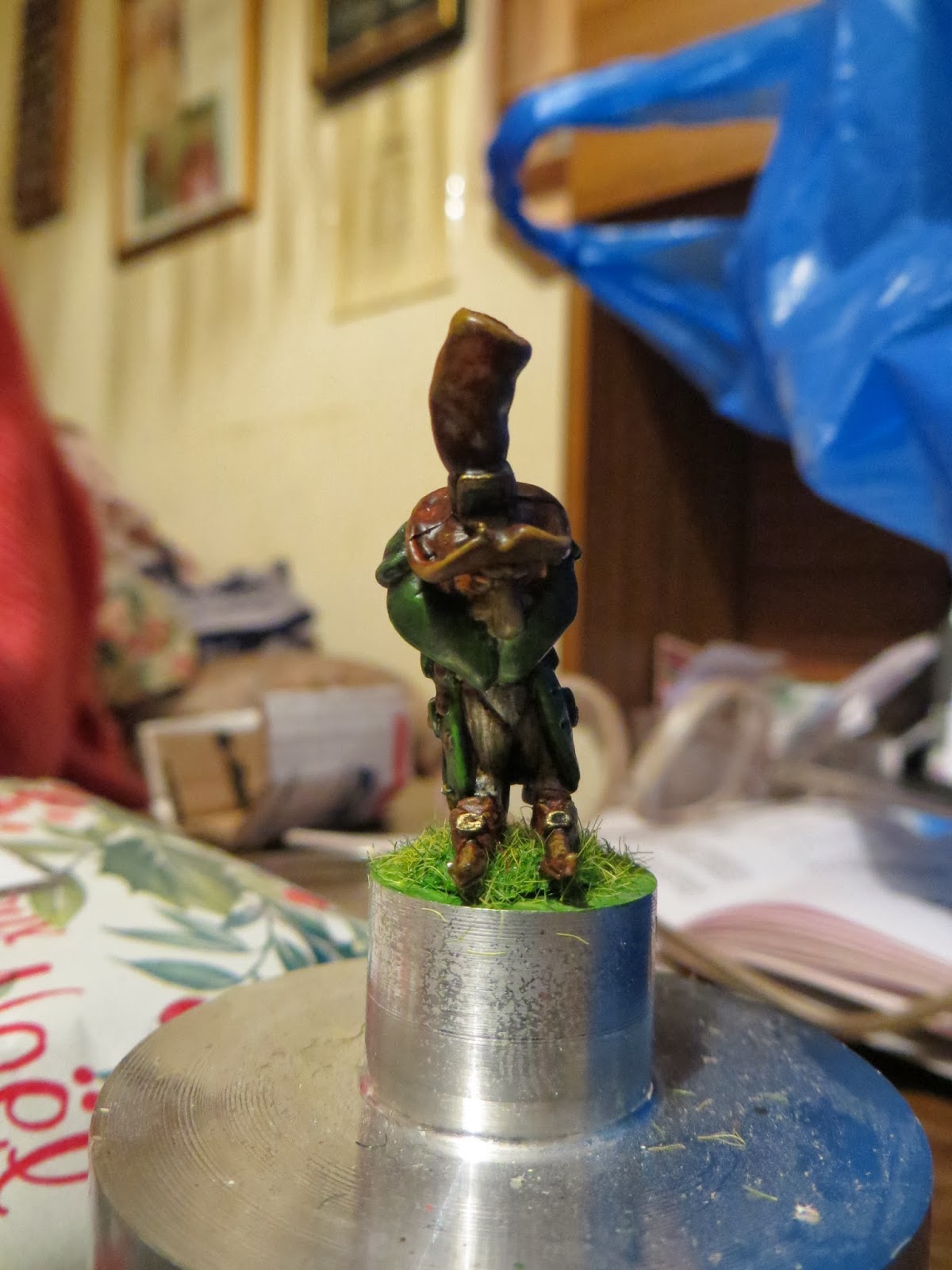 Well with only a few days left of the Crimbo hols it's back to the serious work of essay writing for me. Here's a few pics of what I managed to get painted last week:

This month's Oldhammer Forum painting challenge... a unit for my snotling horde- Hairy Sven Fjord and his Tusky Raiders. 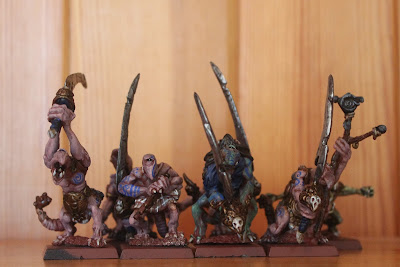 I finally get to paint up some of my own minis! The beginnings of a Marsh Demon unit with Haakskarl swords.
﻿ 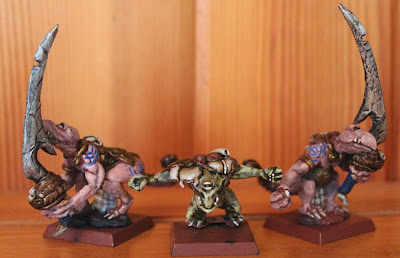 The Clubtail Warriors and their pack-Thrall. I've sculpted a bit of his baggage, but it needs more weapons and shields added to it before he's finished. 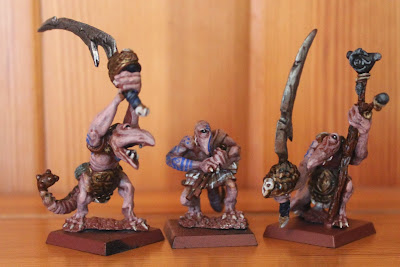 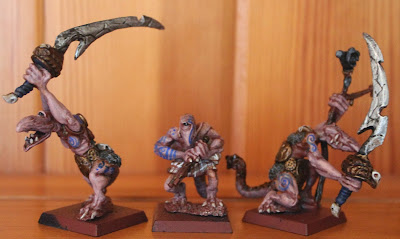 The Curadh, or command group. 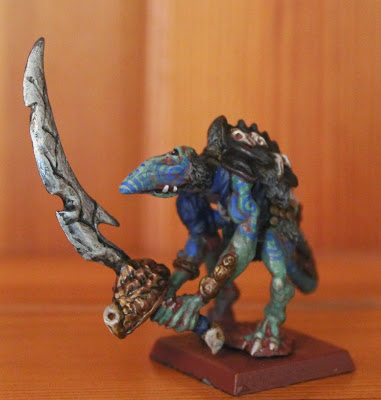 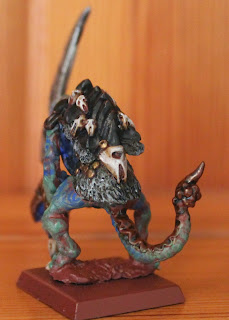 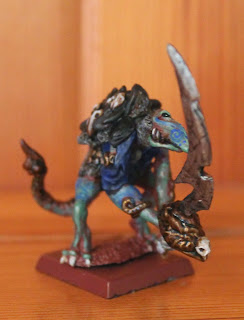 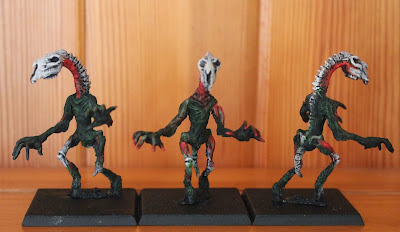 ﻿
A unit of Kelpie allies, painted superfast with drybrushing and a couple of washes.

﻿
A unit of Woldlice, the labour force of the Myeri. Again, speedy drybrush and wash paintjob.