I've been penning some thoughts for my force of diminutive goblinoids and have come up with some background for the much-stamped-upon snotling race. Enjoy!


The smallest of the goblinoid races, snotlings are usually seen as the crummy slaves of large orc and goblin tribes. Here their presence is occasionally required to pilot one of their destructive wagons into battle or to soak up enemy fire at the front line, but most of the time the snots spend their lives doing all the miserable things that nobody else wants to do, and usually end up being eaten for their troubles. Pretty much everything eats snotlings. But all that the greenskins and the other, larger races of the warhammer world know of these runty creatures is but a facet of the snotling race; for deep below even the deepest dwellings of goblins, dwarves and skaven there are countless tribes of snotlings avoiding the gaze of their predators.

Whether snotlings may be truly classed as animal or not is a matter of opinion, since each and every snotling was once an inanimate scabspore mushroom. This peculiar strain of fungus, once it reaches maturity, develops a kind of cognisance, begins to sprout facial features and limbs before finally detaching itself from whatever it grew upon, shedding its mushroom cap and becoming a snotling. Because of their trans-classificational origins, snotlings are inherently at one with the natural world. Save for snots who are pressed into service by other races, snotlings are peaceable and only usually go to war to protect their clan or to avert some natural disaster which their special relationship with the earth has warned them of. It could be that if snotlings were able to develop to their full ability they would go a long way to righting the injustices of the world. Sadly their status as little more than food for most creatures and their delight in hazardous pursuits of all kinds means they are seldom able to live long enough to become an influence. There is nothing snotlings love more than the rush of adrenaline participating in extreme sports such as cliff diving, barrel rolling and white water wagonning. Snots have a special relationship with trolls, who are usually of the opinion that pretty much everything is food. Maybe because snots are viewed as food by pretty much everything else the trolls have a soft spot for the little green fungus people and are often enlisted to help defend snotling colonies. In exchange for this they get to eat any potential threats to the tribe which include, well, pretty much everything really!

Because of their nutritious diet and clean living, snots can live for centuries and grow to the size of a large goblin, but because of their high number of predators and penchant for risky activities only a few ever get the chance to enjoy their longevity. Since they grow from mushrooms, snotlings are genderless, however they refer to the few snots who manage to live long lives, grow to great size and so become the leaders of the snotling clans as ‘big momma snots’. Maybe this is because these snotlings are wise, mature, maternal and always act with the best wishes of the snotling clan at heart. Alternatively it could be because their long lives suggest they never really understood the appeal of the kind of dangerous tomfoolery which occupies most snotlings most of the time. Alongside the big mommas, the snotling clans are overseen by the tribal chieflings. These snotlings have distinguished themselves by their daring (some might say stupid) exploits and have won the respect of the tribesnots. They get less respect from the big mommas who have to pull them back in line whenever their actions begin to endanger the wellbeing of the clan, usually by sitting on them.

The origins of magic lie in the incursions of chaos into the warhammer world and as creatures of nature the snotlings are terrified of its unnatural nature.  They do, however, know a thing or two about plants and the most adept snotlings can create truly startling (and sometimes quite useful) effects by blending and consuming potions. These are the shaman of the snotling tribes, strange individuals usually given a wide birth by all ut the most inquisitive of tribesnots. Their powers of deduction, clairvoyance and healing are made occasional use of in times of great need, but the unfortunate likelihood of such benefits being accompanied by the spontaneous combustion or mutation of the shaman or subject usually means the need has to be very great before they are consulted. They are just about trusted on matters of weather and good times to harvest fungus, which are usually accompanied by nothing more than a few bruises. Long-serving shaman (very lucky shaman) tend to acquire strange deformities such as abnormal growth, extra limbs or weird distortions of the body. These become badges of honour for the shaman. Younger shaman who have yet to acquire such distinctive traits (or blow themselves up) usually cover themselves up in long robes and hoods to try to gain an air of mystery, who knows what hideous form lies beneath? A popular game among tribesnots is to step on their robes at opportune moments and send them headlong into muddy puddles. Snotlings are generally pretty comfortable with their bodily appearance and wear very few clothes except for a simple loincloth. Since they have no reproductive organs quite why they feel the need to cover these areas of their body remains unclear. A few ambitious snots might fashion themselves clothing from vegetation, the hides of dead animals (usually rats, anything bigger is hard for a snotling to bring down) or anything else they find lying around. Some even make suits of armour for themselves from assorted kitchen equipment or loot items from Halfling settlements (about the only race snots aren’t too badly matched against). These are usually worn as badges of honour or to increase their chance of surviving some hazardous new game rather than for warfare. Snotlings have ingenious minds (dangerously so) for creating contraptions from odd bitz and pieces they find lying around. Successful creations, particularly those which can be employed for the mass hilarity of the whole clan, are highly praised and their inventors given pride of place at the banqueting table. This usually encourages them on to even more daring feats and more often than not results in the demise of the hapless engineer. Those inventors whose creations fall short of the mark usually don’t survive the test run to learn from their mistakes.

In all the warhammer world there are few creatures as persecuted, threatened and downtrodden as the diminutive fungus-born snotlings, yet there are also few who are as playful, happy and good-willed as these green-skinned runts. Their tribes are havens of jollity in an unhappy world, governed by benign matriarchs and united in the quest for fun and a worry-free, if short-lived, existence.

I've finished sculpting the heads etc. onto the resin castings I took from my original Fianna Fimm sculpts. Now the unit is almost complete (except for painting) save for the unit leader who is going to be based on Skek-Ung the Garthim Master. I particularly like the strolling piper! 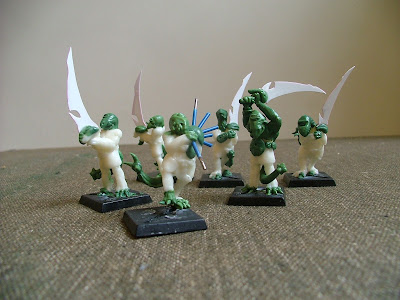 Here's the unit as it stands, with unit filler included... the trial stone! I've decided to leave the Ciatdel Fimir with this unit for the time being, he was floating around a little aimlessly before and looks pretty nice in the front rank. Guess I'd better give him some tribal tattoos then. 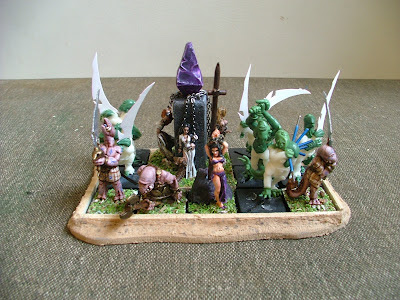 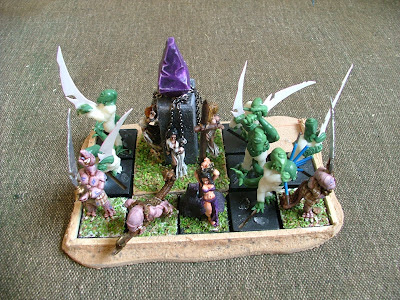 The unit filler next to the Standard Bearer, I think someone's spent too long on the tanning bed! Better tone her down a bit methinks. 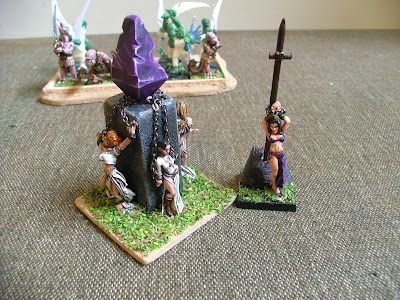 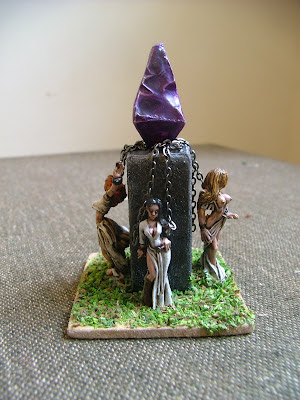 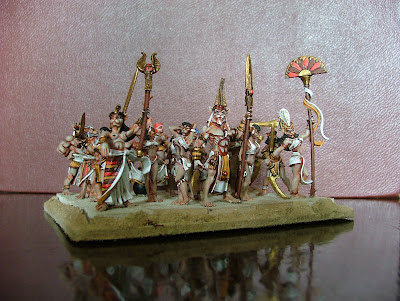 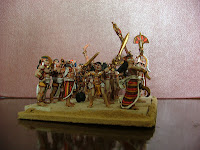 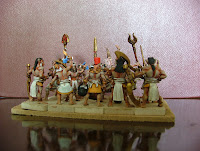 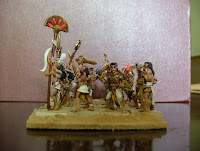 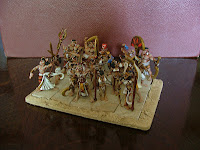 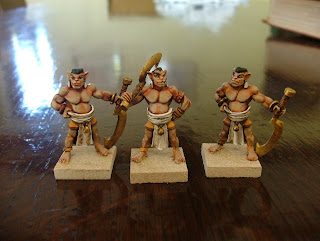 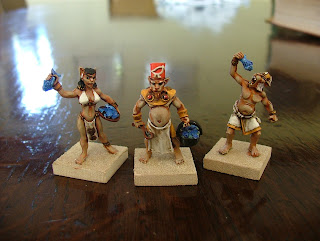 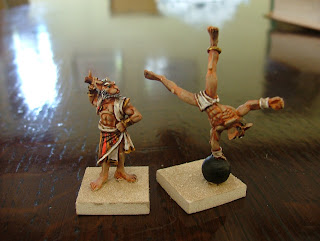 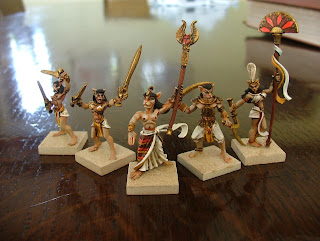 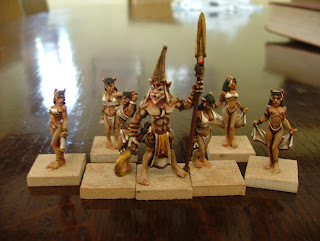 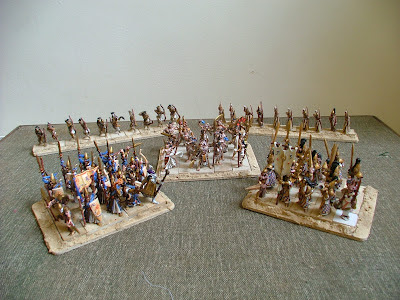