﻿
A few weeks ago GROG had our annual Christmas game. This year I asked to play through the WFB2 Terror of the Lichemaster scenario as I built terrain for it last year and also painted undead forces for Deadcember 2016. Plus, of course, the scenario itself is bound in one of my collected volumes.
I made a few changes to the scenario to incorporate bits from the WFRP Lichemaster book, upscale the battles for my big terrain board and allow four players and a GM. My plan was to fight the two initial battles simultaneously as two 1-on-1 fights on 4x4' boards. Then push the terrain together into an 8x4' for a 2-player-per-side climactic fight. In the event we only had one player per side but it was still a lot of fun and we did get through most of it.
﻿ 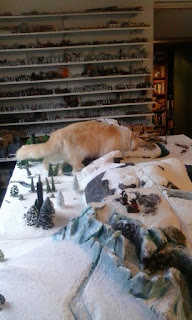 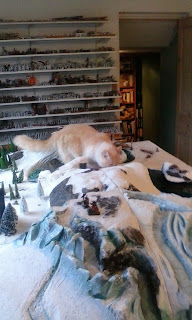 Harry's cats got in on the action. Testing the 'ice' on the glacial lake!

Apologies for the poor photos. I forgot my camera and only got a few phone snaps of the final battle for Frugelhofen. I think Harry and Mike got some better shots of the preliminaries.

At Gimbrin's Mine the Blue Blooded Bandits of Adolphus Zwemmer, lead by Alberto Taglielli, had a protracted engagement with the dwarves. Despite very poor shooting by the stunties they whittled the undead down (and were themselves whittled) until it was Taglielli versus Gimbrin Finehelm in one-on-one combat. Taglielli won and the dead dwarves were subsequently raised to the Lichemaster's cause and their zombie selves joined the attack on Frugelhofen. The Bogels were more successful in escaping, and Krell's undead contingent (lead by Mikael Jacsen) crumbled to dust when their champion was slain. The family were able to make it to the village and sound the alarm, missing only their dear dog Fritzy who paid dearly for his attraction to old bones. 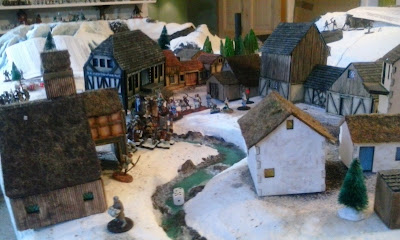 Krell's undead sweep around the mill and try to enter Frugelhofen by the bridge. Riolta Snow (and her fawning hanger-on) does a grand job of holding it against the invaders. She is eventually slain but not before sending Krell himself back to the other side. 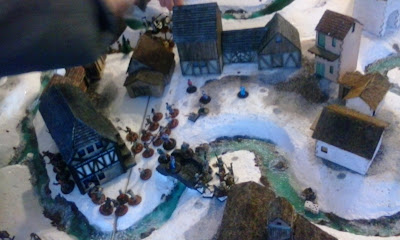 Her place is taken by Albi Schultz, sadly caught without his magic items.
Kemler manages to raise a handful of the slain skeletons to rejoin the queue at the bridge. His fireballs, however, prove damp squibs. Perhaps the snow has made everything too wet? The anarchist's bomb similarly fails to have any great effect, merely playing skittles with a couple of skeletons.﻿ 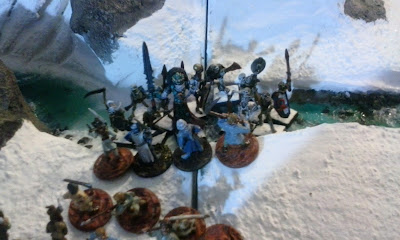 Meanwhile Zwemmer's bandits have made it around the east of the village and are crossing at the river narrow. Hector Brioche, the closest Frugelhofen has to a leader, and Alain Gascoigne, former soldier, lead a detachment of villagers to defend the crossing. 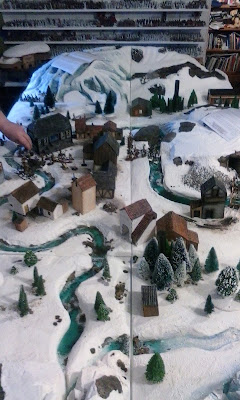 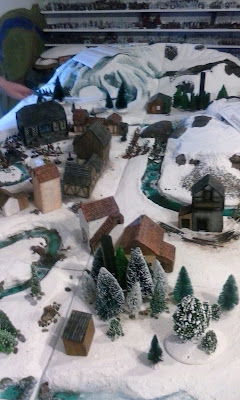 They are pushed back and the towering figure of Zwemmer enters the village streets. 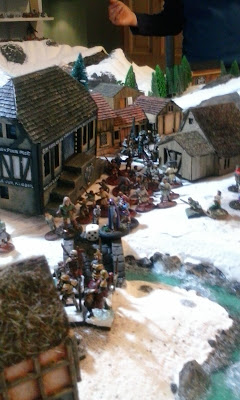 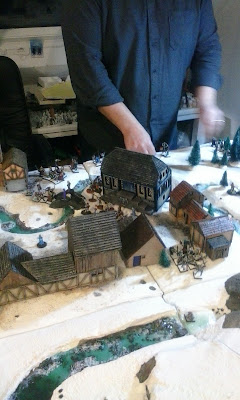 The dwarf zombies take a dive into the raging Vasswasser and are swept downstream to the ford. After extracting themselves from the icy torrent they march into Frugelhofen from the south. 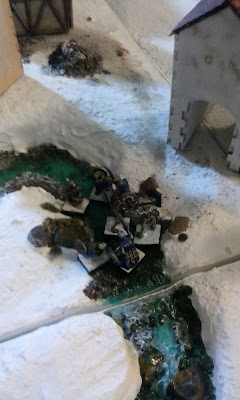 Zwemmer and his forces are finally destroyed after Hector rallies his peasant contingent. Leaving Albi and Hunk Bogel to make a brave last stand on the bridge he leads the surviving peasants on a retreat from the village. Frugelhofen is abandoned to the grip of the Lichemaster. Will the peasants find a hideout in the mountains until the pass clears in the spring? Will Kemler hunt them down and reanimate them for his army? Only time will tell.

The Blue Blooded Bandits prepare for their assault