Getting nicely assembled with my Cult Mechanicus contingent. 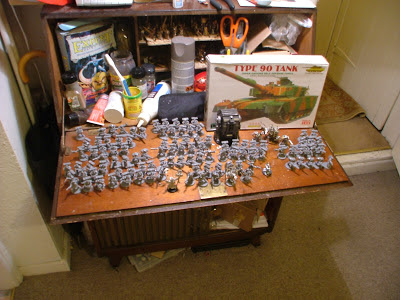 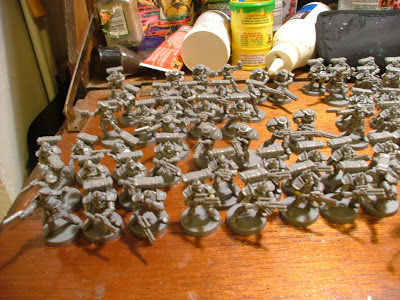 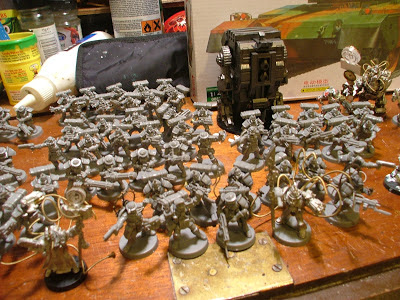 The century comprises a command group and seven maniples comprised of nine Hyspasists lead by a Tessararius. They are aided by 20 Sagitarrii from Centurio LVIII (organised into four maniples consisting of four sagitarrii and a Tessararius). These are from the bags of Warzone figures, and I'm really happy with the range of posing possible, not to mention the different looks achieved by simple head swaps etc. The style of the Bauhaus Ducal Militia and the Imperial Regulars complement each other really nicely to give a uniform-looking army. I've used the Regulars bodies with Militia heads for the Hyspasists, Heavies bodies with Regular heads for the Sagittarii and a mix for the sergeants. 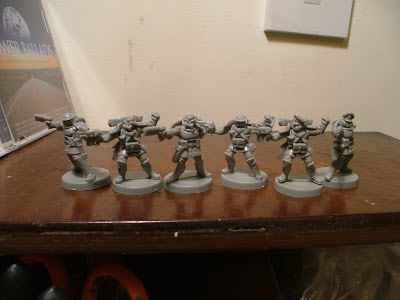 A selection of Tessararii showing the difference an assortment of heads makes to an otherwise static pose. 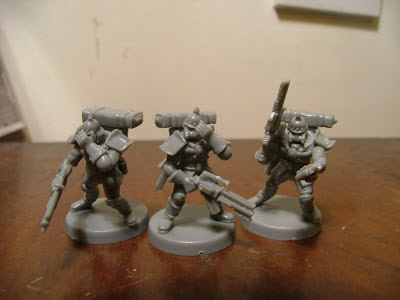 The obligatory comic relief- shot in the eye, "my head hurts" and a guy wondering just how he's supposed to drink from that canteen with a respirator on! 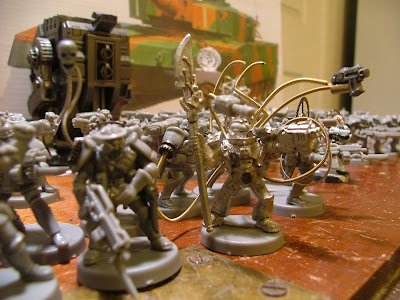 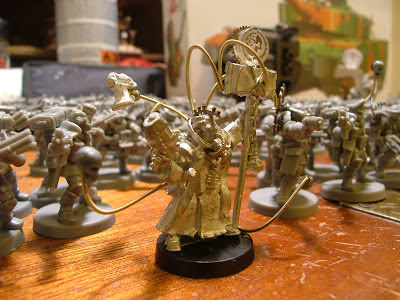 Signifer Romulus Arcana, the Archmagos in charge of the Missio Manufactotum. An Inquisitor henchman conversion with guitar wire mechadendrites and breathing tube and a laser-cut Adeptus Mechanicus logo on his staff. Still to do something with his Inquisition pendant. 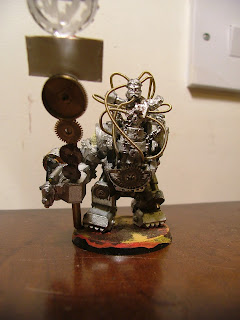 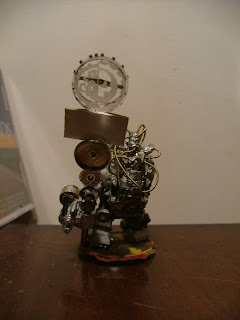 Vexillarius Sepulchrade, in progress! A psyker imprisoned in a mechanical cell created from a grey knights daemonhost, Ghazgkull Thraka and a lot of cogs. The romanesque signifier is surmounted by a laser-cut acrylic logo which I have drilled into to insert and LED so this bad boy will glow green thanks to a watch battery in the base. 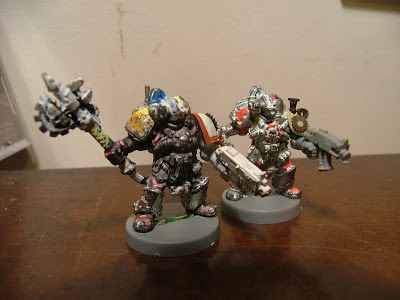 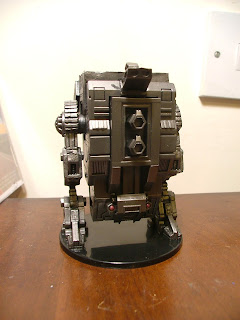 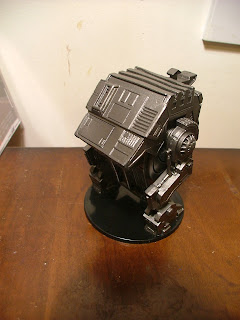 A star wars tank droid I just couldn't resist adding to the army. What he'll be I don't know, some kind of dreadnought maybe, or a support weapon (though he's a bit tall for sightlines!). He's cool though, although the moulding has gone a bit awry on the back and his plating is a bit wonky.

My first tank is sitting in its box at the back there. Hopefully I can get two more at a similar price to make up an Equitata from Centurio LXIII, Ala A, Pax Quirina (counting as Leman Russ). I was hoping for WW1 tanks looking a bit Land-Raideresque but they go for crazy money, so I'll take the Japanese tank! Also need to put together a few support weapons. Will have to scrutinize the Imperial Guard codex. Was using the Tempus Fugitives Cult Mechanicus codex but if I can make the list a legal, official, guard list that's probably better.

After many hours of sprue surgery I have extracted the components of the warzone minis ready for assembly. Quite a mighty horde of parts! So far these are the bits I have collected to make up the Missio Manufactotum arm of the Brotherhood of the Iron Road. Most are from the Warzone Mutant Chronicles bags but there are also a couple of techmarines, inquisitor figures, Ghazghkull Thraka and some spare gears etc. from my Steampunk propmaking. I'm hoping the Steamy vibe will carry through into the Mechanicus, it may even serve for the inspiration for ny garb for the Asylum festival next september. Now to scavenge through my bits box for any nice additions and get busy with the glue. Oh, and incidently Evostick PVC Pipe Weld I have found to be effective for sticking this hard plastic together, probably because it is PVC! Hopefully it'll also work on the Tamiya velociraptors which are winging their way to me.... 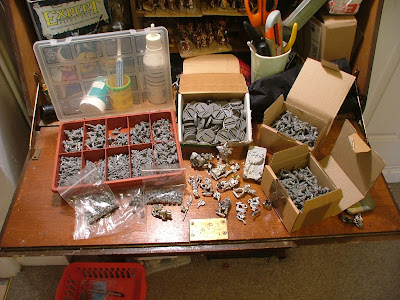 An exciting box arrived today. After my Eldar once again lost spectacularly to a force of Space Marines I decided it was time to make a change and get round to building that Adeptus Mechanicus army I've wanted for a couple of years now. The Eldar can come out again once their new codex hits the shelves. The Eagle-eyed among you may already have spotted a page being prepared for the Martian Machinists at the top of the blog. I had thought of making the Mechanicus army a variant on the Grey Knight/Daemon Hunters list, but seeing as Tech Priests and nice old school terminator/marine models go for silly moneys online I was having a rethink. Wanted to sculpt a few key characters but not go the whole hog and scratchbuild an entire army. Then I stumbled upon a lovely little Cult Mechanicus codex (it's not little actually, it's very comprehensive!) by the indomitable Tempus Fugitives. This is a variant on an Imperial Guard codex, with some Mechanicus rules by GW staff and some originating from their own campaigns built in to what looks like a very fair and gameable army list. Shortly after I discovered this I spotted on ebay a bundle of 80 Warzone figures for about £20, then I discovered a review of the product which says the same bundle costs £17 at Prince August. Every little helps so I trotted off to their site and sure enough there was probably the bargain of the century. And it arrived this morning.... 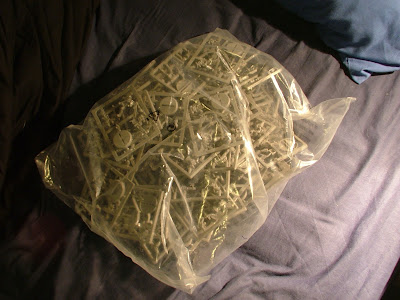 Now that's one big packet of plastic! And to make things even more exciting I decided to buy two, thus making the postage ratio a bit cheaper. So here's my lovely box of Skitarii: 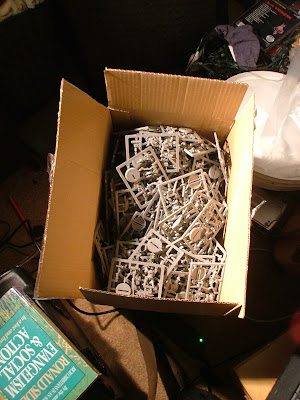 160 minis for a little over £40, that'd buy you about 20 at Games Workshop. And these figures aren't at all bad quality either. They are from two different factions, both gas-masked and armoured, and divide up into 8 squads of 10 figures from each faction. Each squad has a sergeant and heavy weapon figure and 8 troopers. The heads and arms are separate and there are two body options for each faction's troopers, so there's really a lot of scope for variation. Because the way I'm organising my Skitarii I'm not going to follow their assembly guidelines exactly. The Bauhaus Ducal Militia I am going to use as my Hyspasists, removing their heavy weapons and replacing them with weapons from the Imperial Regular figures. Some Imperial Regulars are going to become Sagittarrii and be armed with the heavy weapons from their own and the Bauhaus sprues and the remainder of the Imperials are going to be put aside for future units. So first task is to sort them into components, second task is to find a glue that will stick them, I hear they're notoriously difficult to bond together! Loctite superglue has been recommended...

I did actually get 161 figures, I also bought this chappie, thinking he might be a good basis for my Archmagos. Not sure now I see him in the metal, he looks like something out of the Mighty Ducks crossed with Star Wars! Ah well, he'll find a space somewhere I'm sure! 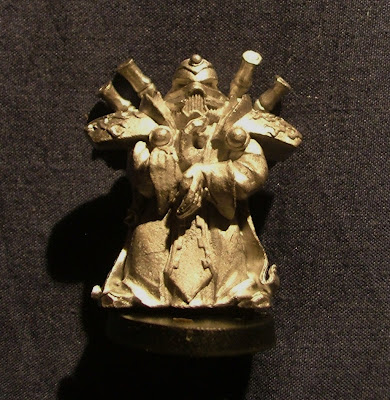 I'm someone who has always gone for small numbers of expensive troops (High Elves, Fimir, Eldar, Space Marines) in order to cut down costs of buying the stuff and time painting it. Now I seem to have two mighty forces on my hands, the snotlings with about 500 of the little blighters and this chunky contingent of guardesque infantry. Hope there's room on my painting desk for all these little guys!