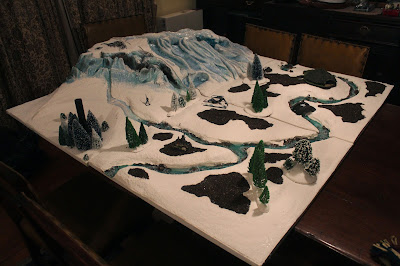 My ambitious plan (at least, one of them!) over the Christmas break was a 4x8' modular board based on the Frugelhorn Valley from Terror of the Lichemaster. I managed to get it all carved out in the quiet workshops before going on leave. Here is it with the map for reference: 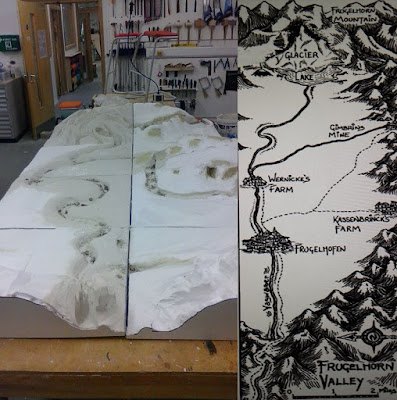 Of course, it's not 'to scale', the idea is to have a board that will give an overview of the whole valley and can be reconfigured into different 4x4', 6x4' and even 8x4' layouts to represent each of the locations more completely. Unfortunately I don't have anywhere at home big enough to lay all of it out and work on everything at once, especially with the temperature of the shed making it unusable. That meant I could work on two modules at a time in the studio, four at a push. Nevertheless, the first 4x4' of terrain is definitely usable now and should get on the table at the nest The Woods demo game on Thursday. Here are some more pics: 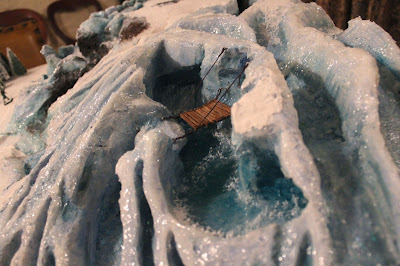 Crude bridge over the cascading rapids in the heart of the glacier. The ice on the glacier is painted polystyrene covered in three thick layers of Liquitex Gloss Gel. Each layer took about 3 days to dry clear! The slush on the floor of the channels is Christmas decoration 'snow' and glitter with a thick layer of Liquitex over the top. 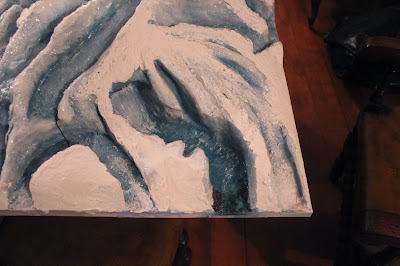 The glacial river flows out of into the river. There'll be a glacial lake board eventually too. 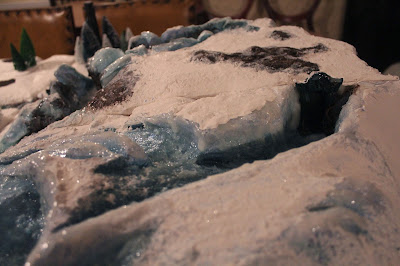 A creepy doorway leads into the ice... what horrors lie within? In The Woods games next week this will be a portal to the Void, in the Lichemaster campaign I see this as the entrance to Krell's tomb. The doorway is from an RAFM Liche (sold in the UK by Oakbound). 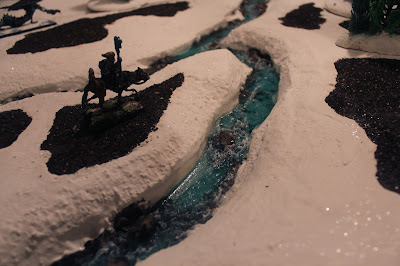 Kemler makes his way across the frozen valley... The river is a painted base, lighlty tinted epoxy resin and three layers of Mod Podge. Clear silicone used to make more aggressive breaking water where the river is narrower, moving fast through the glacier and breaking against rocks. I wanted to give a sense of movement without definite direction on the flat boards so they can sit either way around. It means the rapids aren't quite as realistic as they could be, but worth it for the versatility. The crests are tipped with white silicone. I really liked the look of the river at each step and adding the next layer was nail-biting, but ultimately worth it I think! 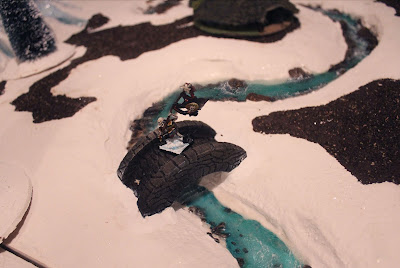 This bridge is carved Styrofoam, held in place with cocktail sticks and milliput. I need to touch in where one of the sticks pushed through the surface, and give the whole thing a coat of PVA to protect it. 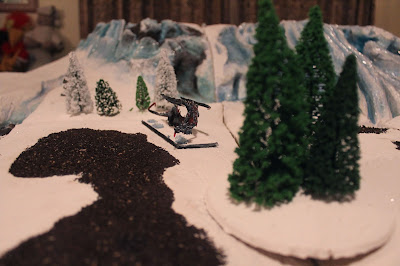 Zombie Dragon stalks the wilderness... Trees were commercially bought, and some are definitely better than others. I went a bit overboard buying different types to see what was out there, but the mixed look that results is pleasing. Edges of the 'dirt' areas need a bit more feathering with powdery snow. 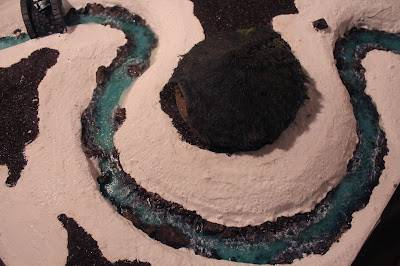 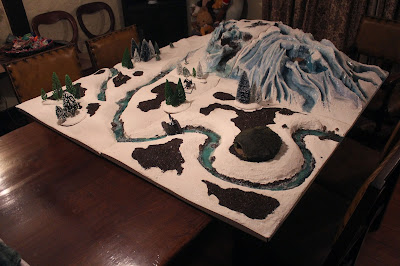 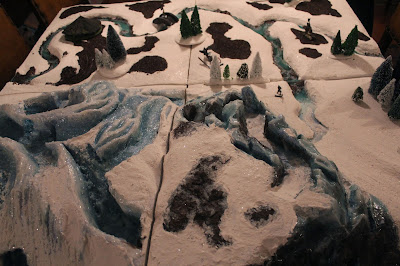 Next up, basing skeletons, Grimbrin's mine and the glacier lake.