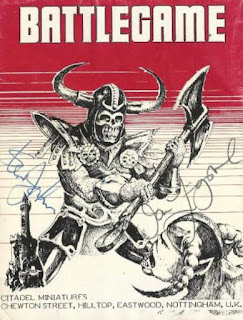 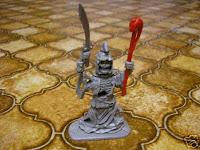 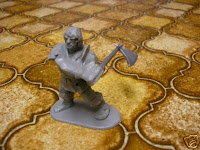 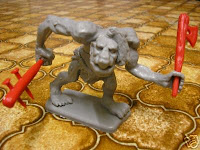 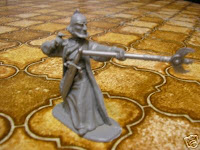 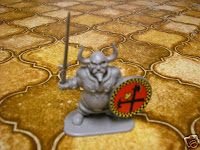 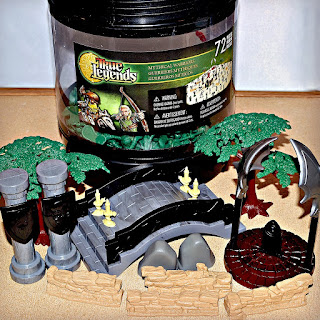 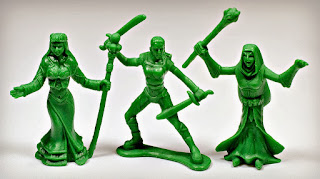 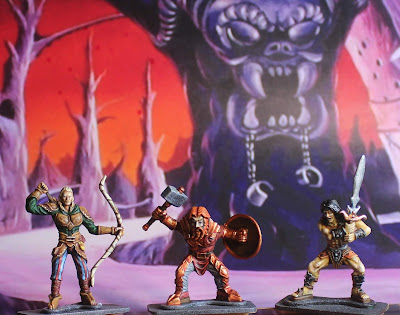 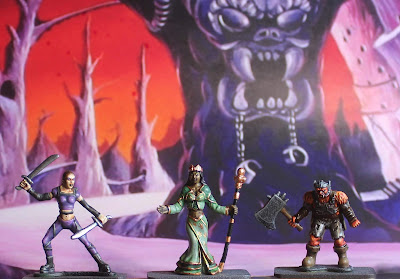 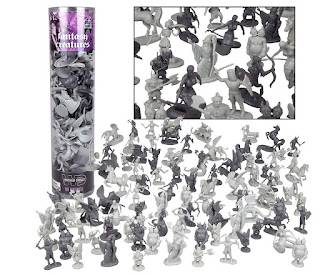 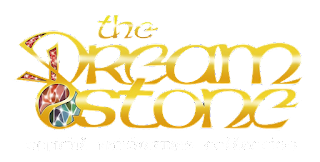 The first wave of Dreamstone sculpts are pretty much finished and have (pending a couple of small adjustments) been approved for casting. I'll just leave some shots of the sculpts here in case anyone is interested. 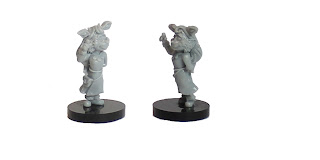 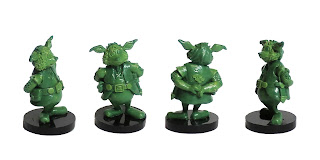 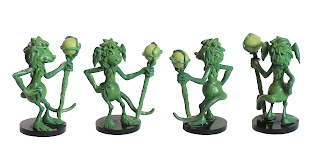 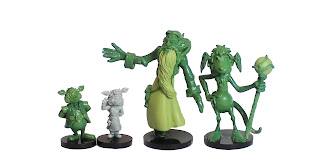 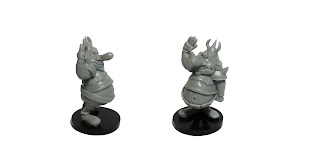 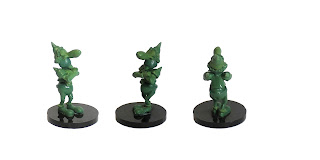 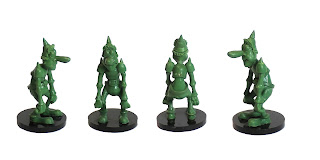 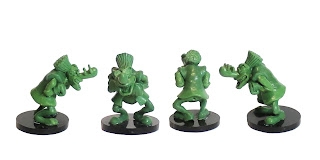 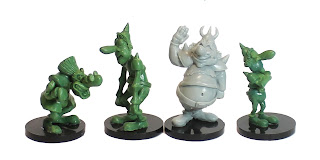 Email ThisBlogThis!Share to TwitterShare to FacebookShare to Pinterest
Labels: sculpting, the Dreamstone 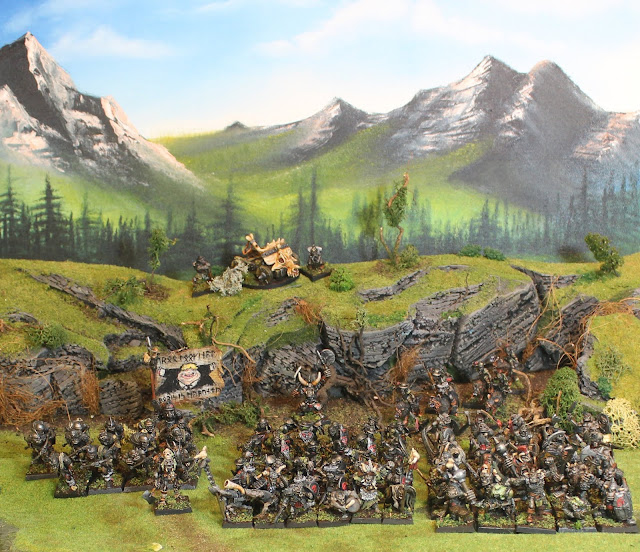 Happy new year settlers of blogsphere! This Christmas was a bit of a first, with no need to travel and the big day falling in the middle of the first week I had 9 clear days which translated (with a cold and impromptu days out and housework) into a solid 5 days of paintingand sculpting. :)

Thus was I able to expand my Orctober efforts to a mighty 2000pts of not-green skins. The mighty, fighting Uru Lukinatt, greatest goblinoid horde of Morrrrrrdooorrrrrrr! To be fair, not all of these were started and finished in the holidays, the crossbow arrer boyz has been creeping towards being finished for most of November and December. 40 odd goblins and 15 orcs, however, are a pretty good turnover for 5 days, even if they are definitely tabletop standard!

I'm not totally sure, but someone fluent in black speech told me the approximate translation is "Oo are yoo lookin' at? Boris is my aunty", whatever that might mean. I figured it was a good moment to revive a truly oldhammer tradition, putting detested leaders on banners! The stone tablet afixed to the pole carries the regiment's official motto "Break shit, done". The reverse of the banner, designed to spur on the following unit, carries the unofficial motto.

I realised I needed to double my number of goblin warriors to make it effective, but was having difficulty finding an economically viable way of doing this. Luckily I had dug out some Moria goblins to paint and had been playing with Prince August home casting moulds that Harry gave me. The worst thing about both these sets of models was the heads, so I experimented replacing them with the very Angus McBride-style orc heads once released by Wargames Factory. They're oversized, as fits a goblin, and really helps lend them a LotR vibe. A short amount of superglue on fingers and broken knife blades later and...

Not too shabby. I had the bow goblins left, so thought I'd get myself a small unit of wolfriders to harass enemy flanks. Because they have a bit of a steppe goblin look I thought I'd put them on the Tibetan mastiffs I sculpted a few years back, with two huge RAFM wolves as mummy and daddy. Really pleased with how how the poses worked out.

This was also a great opportunity to paint up a recent acquisition. I've had my eye on an old Asgard Half Troll Chieftain for some years and last year finally got it together to collect a small group of buyers together and order from Viking Forge who still make them. He's too small to be a proper troll, of course, but makes an excellent Orcish Warboss.

The rest of the orcs are a mish mash of still-available miniatures and a few oldies I had available. I had ordered from SHQ at the start of December, but sadly still no sign of those despite being assured they were on their way. As it turns out I think I have enough orcs, I was just hoping a few of their mountain orcs might go with Alternative Armies one to make a small unit of Black Orcs and allow me to field my warboss as one. I still have some boarboyz to add, and am looking for the savage orc boarboy boss if anyone has one for trade or sale in the UK. He was my first metal Citadel Miniature, painted in Humbrol enamels and car body paints, and I would love to have another crack at him.

The background, in case you are wondering, was the product of the wife and I having our first lesson with Bob Ross to celebrate our 10th anniversary. Still lots to work on (it really isn't as easy as it looks!) before I try to tackle anything specific, but works nicely for a soft-focus backdrop. 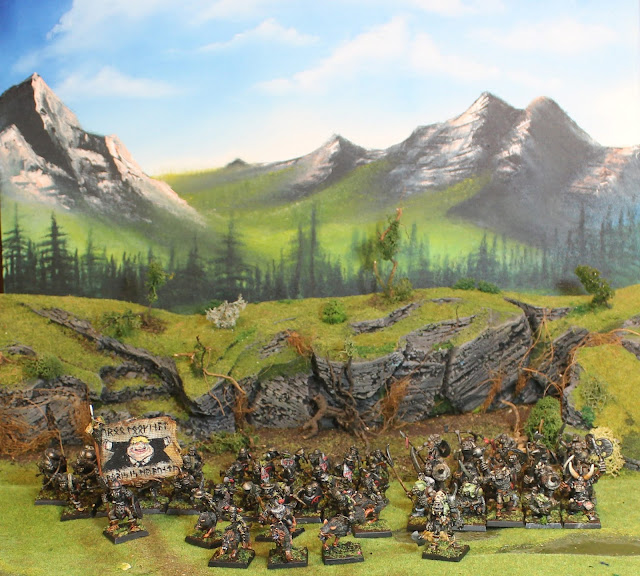 The photo at the top shows the whole horde, this shows just the figures completed since Christmas (including 14 arrer boyz started in November).