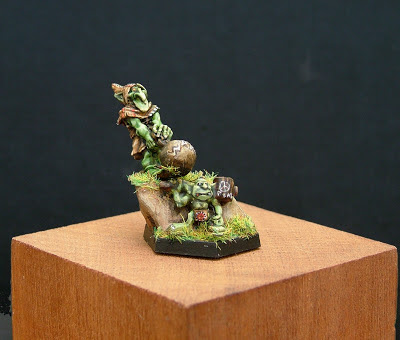 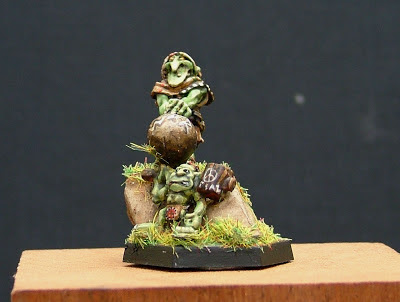 You could resist Goblins no longer! Well, actually I couldn't resist them back in July, but they only turned up a couple of days ago. These Caesar goblins seem to have been hard to get hold of, the UK stockist was out for ages but, surprise! There they were on the doorstep on monday.

Worth the wait? Well, they're plastic and the spears are a bit bent (not really able to straighten them) but for £6 for 36 models (I got 2 boxes so £15 with shipping for 72) they work out pretty cheap. 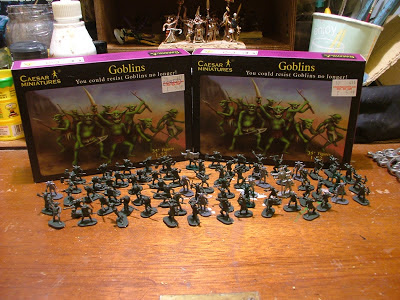 There's anot a great variation in poses, but it was pretty easy to snip the hands off some and rearrange them, the effect was greater than I expected for such simple conversions. They did have quite large chunks of sprue attached (came in a jiffy bag) but since I need to base them up anyway this wasn't as much work as I initially thought. 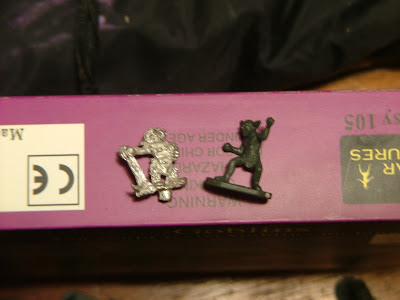 As to how they compare, they're a bit taller than the citadel snots- but in an army which has both Warmaster goblins and an Uglyn Lovelord as representative of the same race scale doesn't matter quite so much! I love their comical gremlin ears and cheeky faces and while their features are as pronounced or rotund as the snots they have a cartoonish feel which fits in nicely. These guys are largely going into the tribe, although 16 spearmen are heading to join Mikey's Pikeys, the 16 with bombs (some bomb hands put on new bodies) and axes are providing muscle and Fuzes for my sawmasters, 8 with bows are joining the Stunty Stikaz and a few are off to don bells in the morris.

Here's a basic layout for the Snotling army, which should make up to about 3000 points worth of snots. Some of the text has not Print Screened very well, but I think it comes across. The idea is to divide the army into contingents. Several of these may combine to make up units, but I wanted lots of variation and to be able to create 80s-style warhammer units with characterful leaders and definite style. Each base will effectively be a mini diorama of the contingent, with an appropriate label giving either the name of contingent or the leader/champion. Lots of colour, lots of variation, lots of crazy madcap fun! 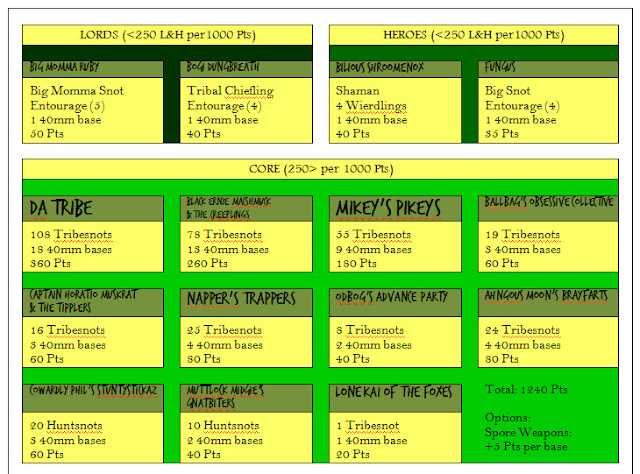 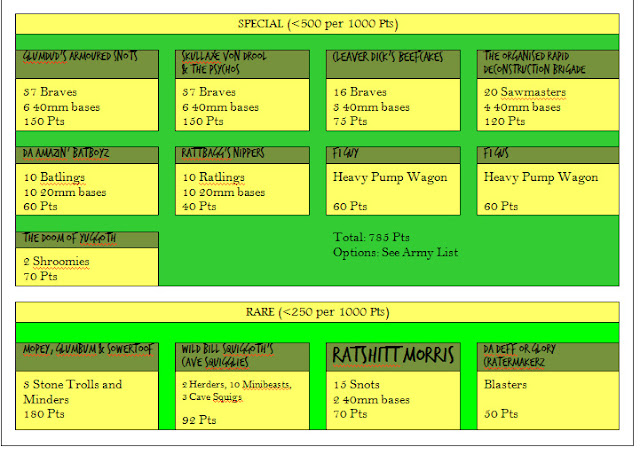 Obviously there aren't 'official' rules for most of these troop types, stay tuned for the Cave Snot Armies Book featuring such glorious entries as the Snotling Blasters, Shroomies, Sawmasters, Shamen and Wierdlings.

After a fair few months of collecting I have amassed a large enough force of Snotlings to embark upon the army! 550 of the little blighters (thanks to a generous ebayer who recently furnished me with a little under half the force!), along with trolls,squigs and steeds. 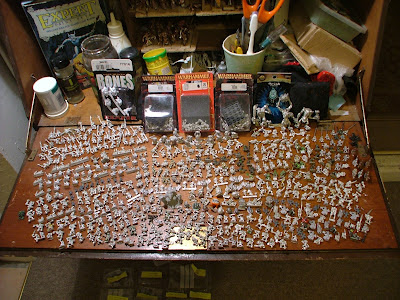 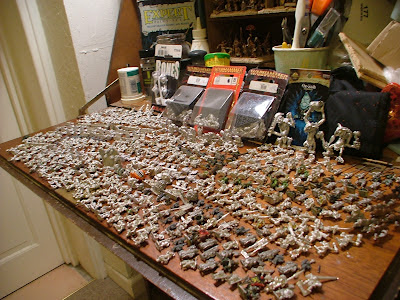 Now all this came about because of these guys: 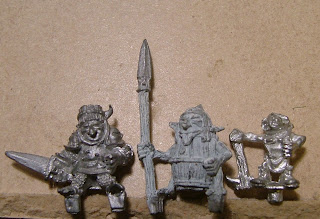 Which I collected for a long-standing and ongoing project not yet ready to be revealed. Having fallen in love again with the miniature greenskins I shelved my Chaos Dwarves for a little while and embarked upon a tiny goblinoid horde.

The army is not entirely snotlings, I have mixed in a host of other miniatures for variety (and price!) so here's an opportunity for me to compare some of the ranges/models with their snotling contemporaries: 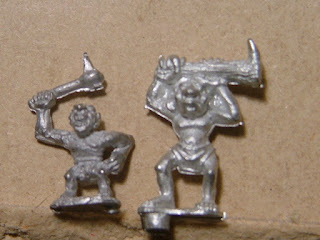 This smiley chap on the left is a Chariot Miniatures goblin. Yup, smaller than a snot but the nose and the grin mean he fits in pretty well. The problem with this range is the poses vary little, with simple weapon changes being the order of the day. I bought these guys off ebay so have no idea how much they cost new. I also have some of their orcs in the army, less comical-looking so they don't quite fit as well but they add a bit of an extra flavour. There's also a range of bat-winged goblins which are sadly the 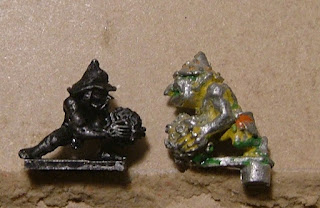 same model as the club-wielding gobbo but with, well, bat wings! As an interesting aside, the guy to the right is part of a war machine crew. Now, you can't tell me that with his hat and fungus ball he isn't inspired by the Citadel snotling he is pictured with! 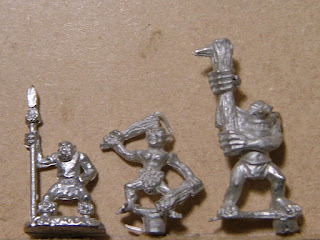 I'm using a variety of Pendraken minis in the army as they are cheap and (I think) a nice little selection. First up are these guys who are goblins. They come with swords, shields, spears, bows, clubs and a nice selection of command and musician models. Again much smaller than the average snot (right) but measure up well against the tiny little snotling (centre). at £1.80 for 10 they are substantially cheaper than genuine snots. 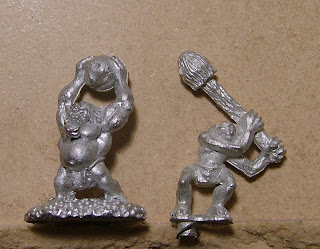 I'm also using Pendraken trolls, which measure up quite well as muscled snotlings. There are also Night Orcs and Squogglers in the army... more on these later on. 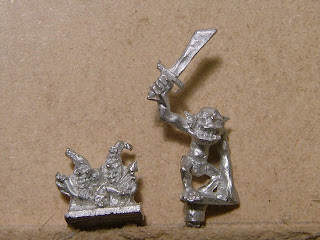 These Warmaster Night Goblins were an experiment. They're tiny tiny next to the mighty snotlings! Fortunately I am able to invent special background to fit them into the army, and they're meant to be a crazily assorted bunch anyway. The detail is pretty good for something so small. I'm using some Chaos Warmaster figures as well as goblins. I'd really like to get some Warmaster spider riders to be little arachlings, but they go for silly money online. 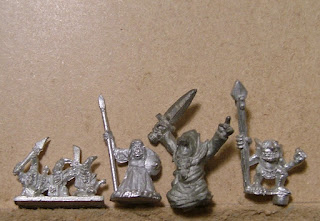 The Night Goblins are going to form a special section of my army, along with their commander (a Warhammer Carrion Wraith, never knew why they were so small but they're a good match to snotling size!) and some Pendraken Night Orcs which bridge the two scales nicely. The middle-finger snot would fit in really nicely here, but sadly I haven't managed to acquire one yet. 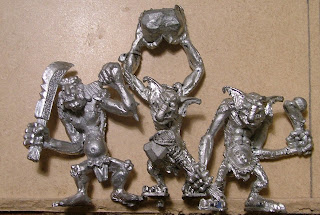 I managed to pick up two stone trolls pretty reasonably online but drew a blank getting a third. Luckily I stumbled upon this fungus-headed troll from Black Tree Design... how appropriate! His bulgy nose, beady eyes and long, tattered ears are very similar to those of the old Citadel trolls, in fact he could be a not-so distant cousin! He even has a scaly back like the others. 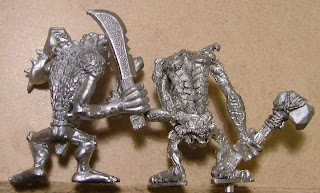 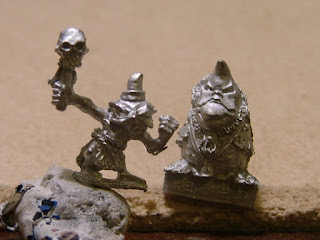 I wanted a more fungoid specimen than the genune snotling shaman to be my 'wizard'. Snotlings are inherently suspicious of magic since it is unnatural but they do use plant extracts and other ingredients to create potions, some of which have an adverse effect on the snotling's physiology. This little chap is perfect for what I was looking for, nicely detailed and a great characterful addition to the crew. 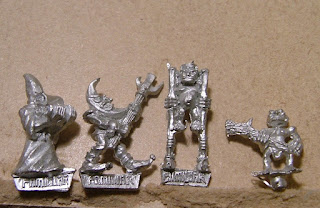 The shaman's Wierdling followers (who pick up where he left off in the event of a, umm, mishap) are the infamous Famous Familiars. Since the effects of potions can cause a variety of mutations some Wierdlings choose to hide their features behind cowls, whilst the disfigurements of some are too extreme to mask. The familiars match snotlings in height really well, tending to be a little slimmer but not noticeably out of proportion, although in a Wierdling hat would be nothing! 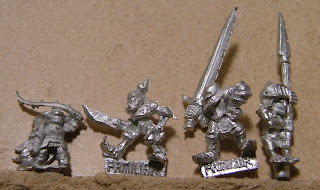 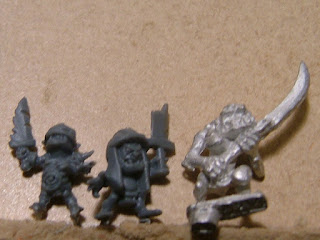 I spotted a load of these creatures for very little monies on ebay and thought I'd give them a try. They're very tiny and have a lot of flash/sprue on them but they're fun little characters. I've got some mooning Orclings and some squished Orclings to scatter around the force. Sadly the really nice variations of Orcling seem to be only available from Foundry themselves and aren't at all cheap (8 for £10, yowzers!) 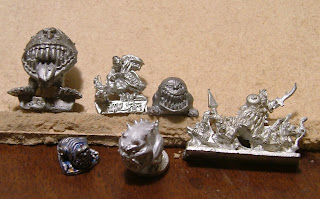 SQUIGS!
Yes, the snotlings have Squig allies! I picked up a pack of Rogue Trader Ork Squigs which are nice and small, easy for the snots to handle, and mixed in some Pendraken Squogglers which are a nice size match but only come in one pose. The beastie familiar also found a home among the Squigs. Finally I picked up 3 reasonably priced Cave Squigs... they're so expensive on ebay! The snotling herders are Warmaster Night Goblin Squig Hoppers, whose beasties match the Rogue Trader Squigs in size. 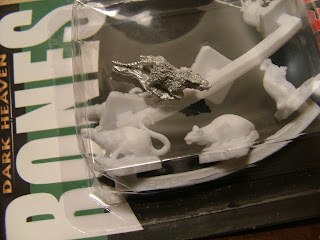 I have no idea where these metal rats came from but I only had 8 and wanted 10 so I bought a pack of Reaper rats to furnish some extras. The Reaper models are smoother, more realistic and less scabby than the metal ones, which isn't neccesarily a good thing. Hopefully once they're mixed in together and painted the difference won't be so pronounced. 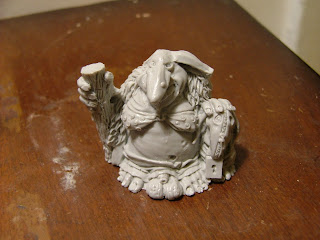 I wanted a nice, rotund and suitably matriarchal figure for my Big Momma Snot, the head of the tribe, and settled on an Uglyn Lovelord by Scibor. Can't think of any other use for such a model! It turned out to be much larger than I imagined, the size of a large goblin at least. Nevertheless it's so ugly and fantastic I can't not use it! Of course, the meat and two veg poking out of... his? her? its? pants will need to be removed (ouch) and the Uglyn with the gimp mask she is patting is far too big and will probably be replaced by a mushroom.

On its way are a few more snots and some genuine 80s Mushlings... or are they Snotrooms? I'm also needing a couple of pump wagons, the double-decker versions, but these seem to fly off the internet for far too much money. Maybe I need to just scratch build some.