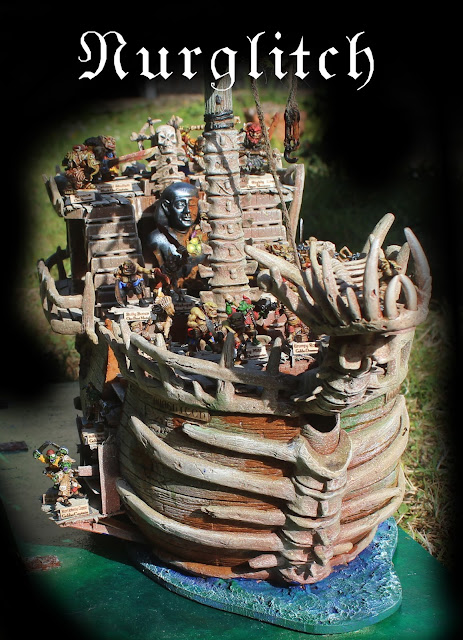 On Sunday, in compliance with my BOYL painting schedule, I finished Captain Ishmael Skullet- last of the crew of the Nurglitch; Plague Ship of Nurgle. 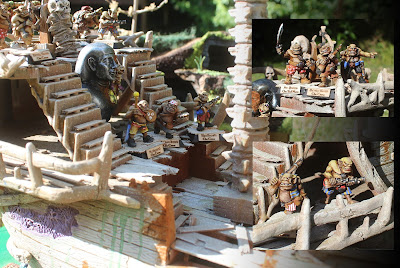 Skullett and his crew of merry Orcs and Goblins were happily sailing the Estonian Main with nerry a care in the world when a freak storm from the north blew them down towards the Pirate Coast. Familiar territory for these brigands they thought nothing of the swift ride southwards until they were swept into the carcass of a great whale floating in the ocean. As their ship was entangled in the creature's remains they became aware that the air was getting hotter and clammier and a green mist made visibility incredibly poor. The mist lasted for about an hour after which time it cleared to a mere haze, leaving the crew bewildered staring at the exotic statue which had appeared on their deck. Beside it stood a cloaked figure with startling red hair and a gaelic accent. The Mighty Tim, as he proclaimed himself, announced that he was now master of the vessel and that any mutiny would be treated harshly... at which point three Plaguebearers stalked out from behind the statue.
﻿ 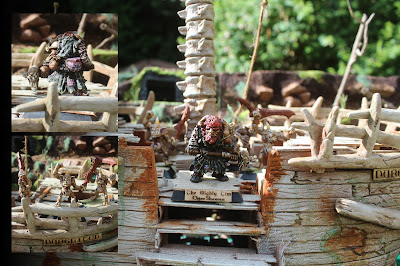 The Mighty Tim had stowed away on a ship from Albion in the north but had been discovered by the ship's crew which tried to throw him overboard. In his anger the great Sorcerer of Nurgle caused the ship to be swallowed by a daemonfish from the deep. Ship and fish then cruised the ocean floor until the rot ate away at the fish and its carcass washed to the surface where it was ensnared by Skullett's vessel. A curse now lies upon the Goblinoid crew, sparing them from the rot so long as they remain aboard ship to do Tim's bidding. The moment they touch land they will succumb to the dread Nurgle's Rot.

﻿
Tim is aided in steering the ship by three Shamen, Tribal Orcs who were also victims of the daemonfish. Between them they control the wind, the tide and time in the immediate vicinity of the new Plague Ship 'The Nurglitch'.

Not all the Goblin crew were aboard when the collision happened. The bitter enmity between Short Johnnie Copper and Jackie Sparrowhawk was causing problems for the captain and so he ordered both bickering factions to be put adrift in makeshift dinghies. A short while after the Chaos mist cleared they both turned up again and collided with the Nurglitch. The Gobbos were told their lives would be spared so long as the remained loyal to Tim, and they now serve as useful 'go ashore' boys since the Orcs are under the curse. 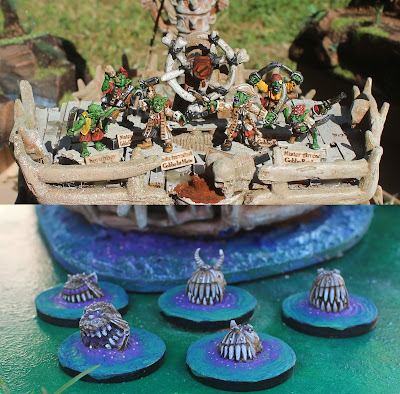 ﻿
The ship carries a supply of Squig Mines. With bodies the approximate density of a puffball they are able to bob easily in water and take mighty chunks out of any ship which bumps into them. Charge of these Squigs is the duty of the Orcish gunner and his two Goblin crewmen. 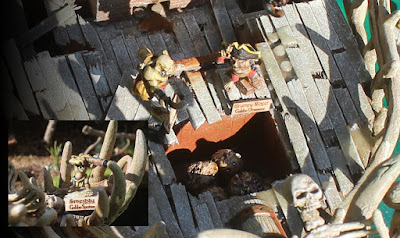 This week I'm on Dark Elves for my Blood Bowl team, the Black Forest Chateaus, but after that I'll be working on the Goblink Airship.﻿