Hello! I am still with you. Yes, I know I have not blogged in ages and ages and ages and with BOYL approaching it's time I pulled my finger out and wrote something. This year I think I have a legitimate excuse for being lapse on the blog front, I have been moving house and sorting out our new studios. With that largely done I look forward to being able to blog a bit more frequently and maybe even get some more videos made.
For BOYL 2019 I'm putting on an idea that's been kicking around for a few years now, a siege game on a tiny scale with snotlings assaulting a dwarf brewery. My lovely new gaming table means that with just under a week to go I was able to lay everything out for some testing. Of course, since I had painting still to do for it I didn't actually get to test until last night, but thankfully everything seemed to go to plan. Rather than give an account of the battle (which I'll save until after BOYL) I'll just leave some teaser shots here to show some things that could happen. SPOILER ALERT! if you don't want any surprises spoiled for Saturday's game don't look until Sunday!﻿

The snotling horde is glimpsed from the battlements of Brewer's Droop 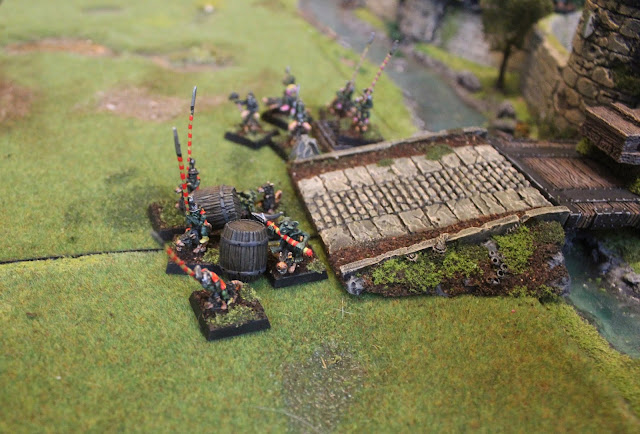 A squad of ratlings pops up from a convenient drain and makes an early raid on one of the stranded beer wagons. 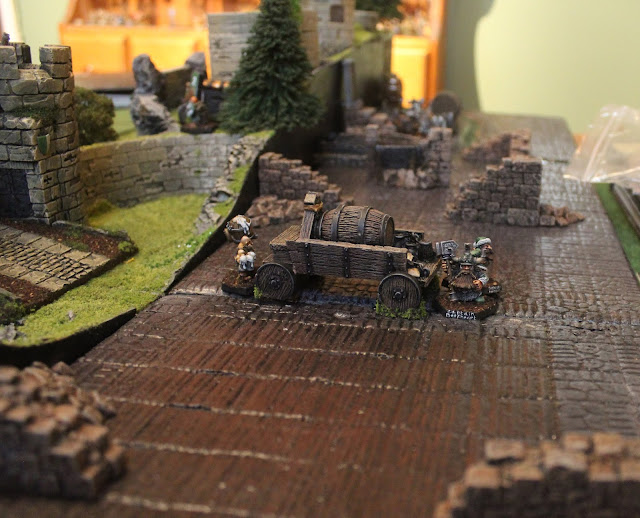 The dwarf brewmaster and his team manage to get the other wagon back inside the gate, but with a lapidified cart weighing the drawbridge down they can't get the way sealed behind them. 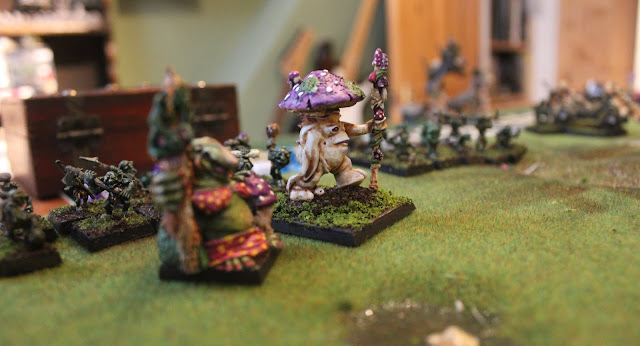 It all goes rather wrong for the snotling shaman on turn 2 as his mushroom addiction overcomes him. 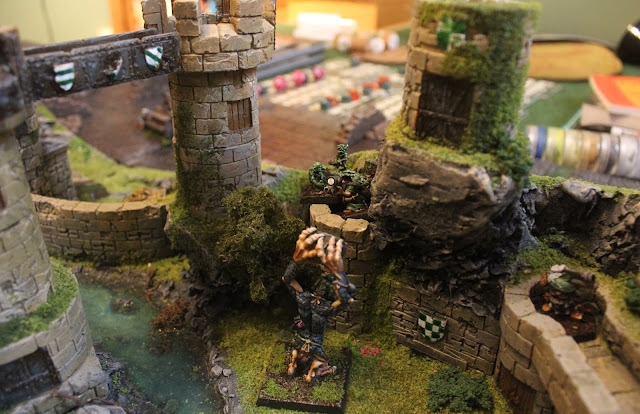 One siege troll makes it to the walls and a hapless handgunner is mobbed by 5 determined snotties. 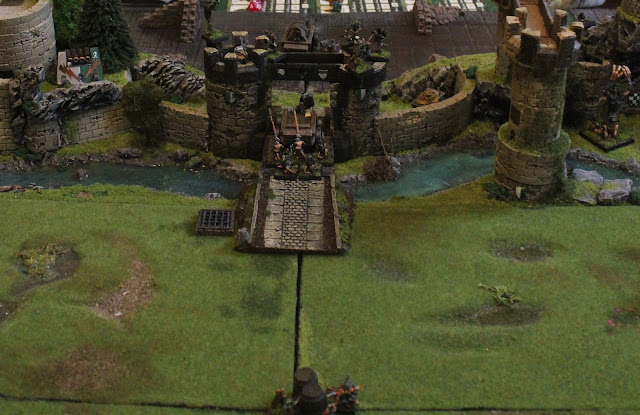 The second squad of ratlings makes a push for the open gate... 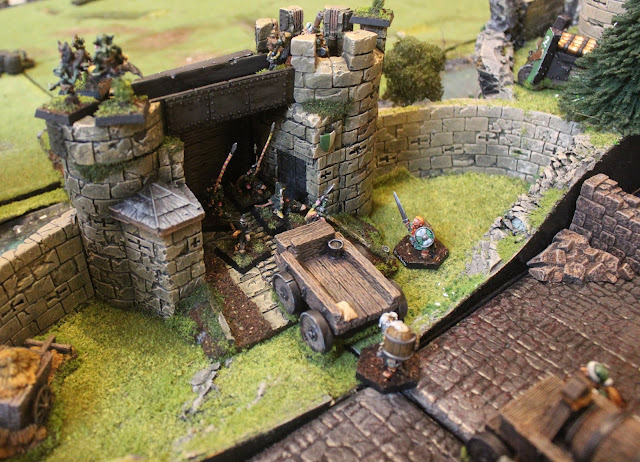 ...and make it inside just as the dwarfs get the cart clear and raise the drawbridge. 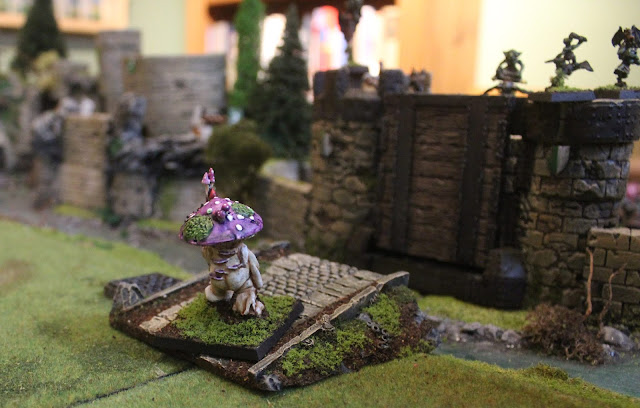 The giant mushroom beast contemplates the gatehouse as the batlings swoop on the defenders. 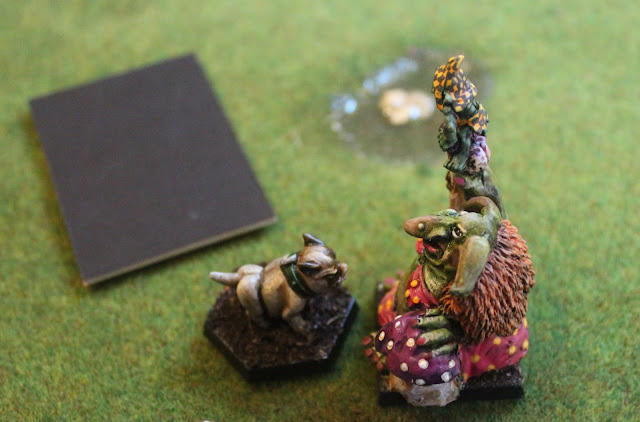 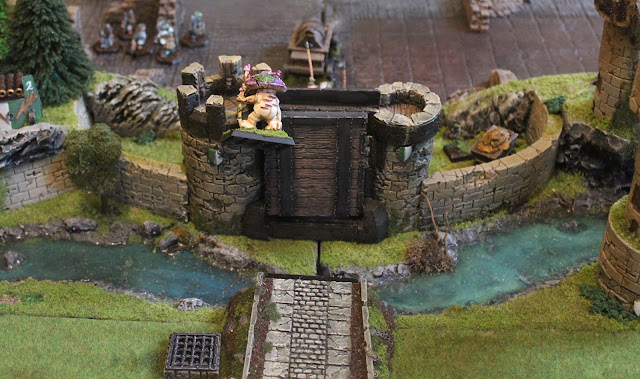 The shroomy beast begins to climb the tower... 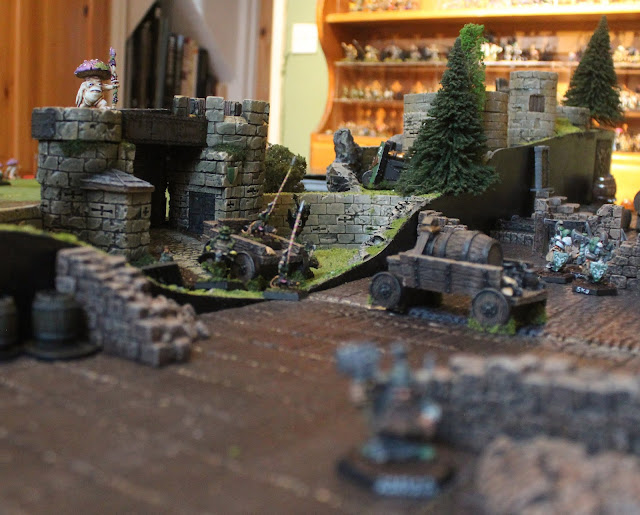 ...and the dwarfs flee in terror as the dreadful apparition scales the ramparts.


All in all the game ran very nicely. Despite the pictorial evidence the dwarfs put up a stirling defence and with the snotlings unable to summon more reinforcements only two barrels were whisked away to the grotty grotto. I have gained some important tactical insights which I will use to test again tonight and see if the snots can fare any better. Of course such insights may be wheedled out of me through the use of beer at BOYL on Friday night.... :D