I was honoured to be asked to contribute a figure for the Heroquest Hero Quest project over on Scale Creep. Given my impending skellibob army I made an entirely appropriate choice... 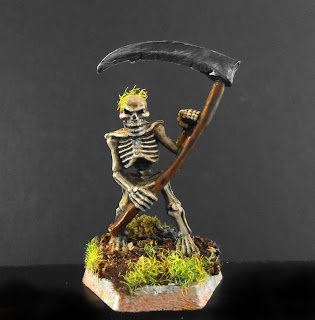 Find out more over at Scale Creep 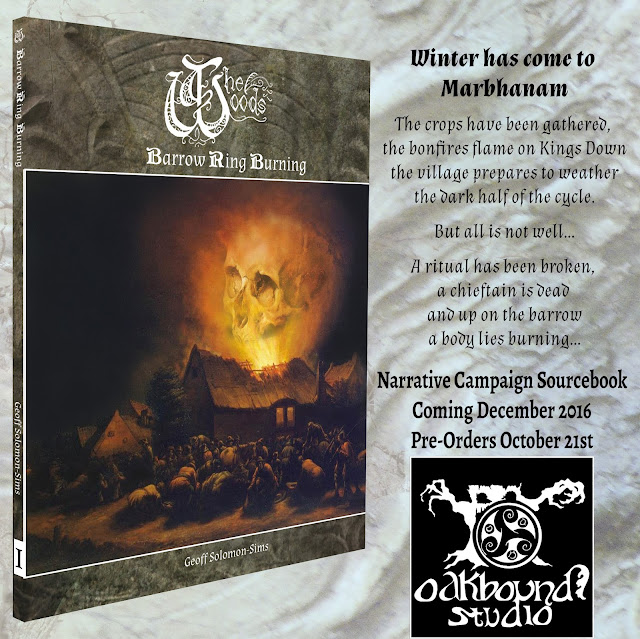 Whilst I've been building up the stock of undead models I have also been completely absorbed in spookiness of a not-unrelated kind! I've just finished writing Barrow Ring Burning, the first narrative campaign book set in the celtic fantasy world of The Woods. The book will be available for pre-order next week through Oakbound's webstore and will be released at the start of December, so let's see what's in it shall we?

The book is a GM's guide to the village of Marbhanam and the surrounding countryside, it's traditions and customs and the unravelling of a dastardly plot to unleash forces of darkness into the Mortal Realm. It has rules and scenarios for using the SystemMech game system, but can easily be used as a sourcebook for any other RPG or tabletop skirmish game.

Barrow Ring Burning is split into six chapters, each one moving the story towards its climax. Played through just as written the adventure is designed to take 2-3 hours per chapter and so splits up nicely into six sessions with opportunities for character advancement and development between each. Of course, there's so much extra material and ideas for expansion within the text that an experienced GM can extend the adventure for as long as they wish!

The narrative begins on the eve of Samhain (or Halloween if you prefer) when the death of its chieftain throws the village of Marbhanam into confusion. Add to this the mysterious crowned minstrel who staggers into the midst of the wake and the terrifying masked figures lurking out on the downs and the signs don't look good for a peaceful winter season... The narrative reaches its climax at Modraniht with the veil between the land of the living and the realm of the dead at its thinnest, will anything stop the pale kings? Will spring ever return?

Each section has a mixture of classic pen-and-paper roleplay and tabletop skirmish scenarios. There is a strong lean towards investigation but the characters also find themselves frequently facing situations where they will have to gauge whether to take on their foes or try to out-manoeuvre them.

Because this is a perfect campaign to begin at Halloween we will be emailing everyone who pre-orders a PDF copy of the first two chapters so you can throw your players into the midst of the Samhain rituals whilst the printers get on with putting together these lovely books. As always your comments, suggestions and shares are much appreciated. Happy Autumn! 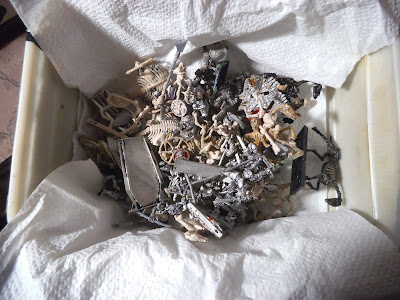 Well, the horde have had their nice Dettol bath. Not quite got everything off, but if there's any army ragged strips of paint hanging from the models isn't a bad thing it's with the undead! Not that many additions to the horde, 15 more plastic citadel skellies (more modern ones but they'll fit in ok), 3 cool 80s citadel skeletons, 2 4th ed undead cavalry, a 4th ed skelly command group and the black knight/mounted wight lord from Circle of Blood. The wight lord I've wanted since he came out, he's brilliant. Does anyone know if his horse is a recasting of a previous Citadel one?

The astute among you may also spot a black coach in there. Not sure what I was thinking, the black coach is possibly the worst kit GW have ever made. I mean, really? A coffin-shaped hearse? It's not even well-executed. It re-uses the yolk from Arkhan the black, plastic cart/cannon wheels and the back of the coach is just open with no details whatsoever. Utterly crap. So I guess I have set myself a challenge to actually make it look half-decent. Since I have no vampires in the army and am not planning to I will also need to find a new use for it...

I also got a nice surprise on Friday as my Twisting Catacombs furniture finally turned up. I forgot I'd ordered a revenant/wraith with a scythe so he's going into the army, gonna look great. I've also found my Attack at Weathertop Ringwraiths which will make beautiful wraith figures. None of these are included in the above.

The guys below I would still like to add to the army. Iron Claw horses, Citadel skellies, skelly horses and a liche. If anyone can help let me know. :) 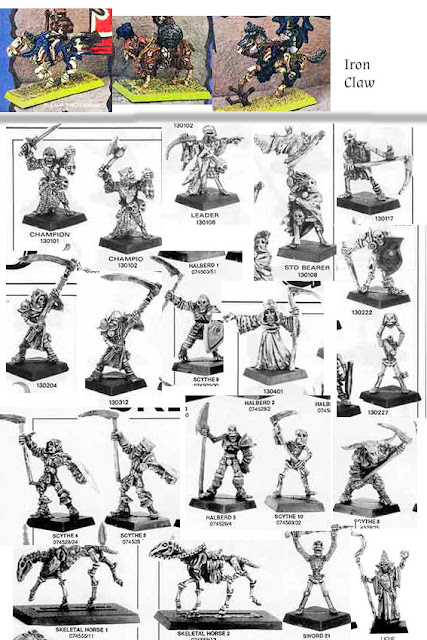