A couple of weeks ago on the Oldhammer Facebook page somebody posted a picture of Tom Meier's sculpt Baakesh Va, based on a painting by Larry Elmore, originally released by Ral Partha. This huge sculpt is still available from Darksword and thanks to the excellent Miniature Heroes can be ordered from the UK with minimal postage. As soon as I found out I couldn't resist. You see, there's been a long-standing feud in my Fimir clan for a while now between Fergus, the Oakbound Myeri Tiarna, and Dergissh na Chechtt, Diego's Warlord.
Dergissh is bigger and commands the Mistmor, the ogre-sized Fimir of my clan, whereas Fergus is the captain of the Fianna Fimm, the elite warriors. I do have a Meargh, but she spends most of her time away (on my wife's dressing table since it was a custom sculpt for her) and doesn't bother herself with the petty squabbles of the nobles. What I needed was a Fimir noble so large that no other would dare question his authority... Baak looked like the perfect candidate- 3 fingers, check. Big axe, check. Furs and scale armour, check. Tail and single eye, ok not so much but we can work on that. So the order was placed.
Miniature Heroes lived up to their heroic reputation and the model, although out of stock, was here within two weeks... and Darksword are doing this properly!
﻿ 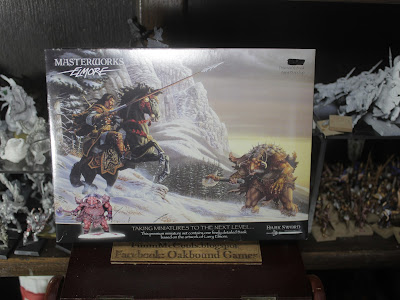 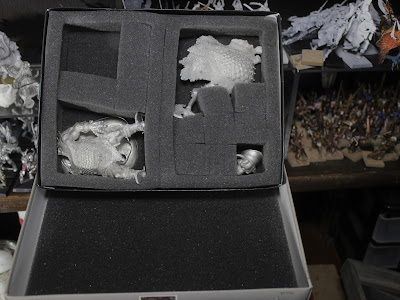 Great packaging and wonderful detail from this 1993 sculpt. Its actually not as heavy as I was expecting (hoping, hee hee) since he's hollow, but the 100mm marble base I'm planning on mounting him on will help that! 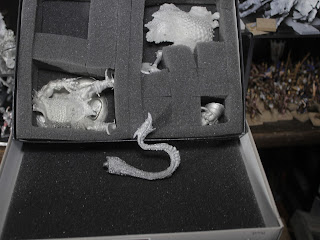 Obviously a couple of adjustments will need to be made. Fortunately it looks like this tail will fit him fine, it's from A-Angor Demon King. I got the body and tail of this awful sculpt in a bulk lot a while ago and the tail looks pretty much perfect for this, maybe blend together some of the scales with some putty. The head will need a bit of a resculpt, but hopefully his forehead is pronounced enough to sculpt in a single eye, blend his eyes into cheekbones and extend his snout a bit with some longer fangs added.
Why is the timing of this particularly good? Well, it's almost the month of Marsh. Some people revere Orctober with its greenskinned palette, others favour the brighter hues of Slannuary. For us Fimir collectors Marsh is the month for getting back in the painting groove and expanding the clans. Now this year I also have a portfolio and dissertation to write for my degree (which is nearly done after 6 years, hooray!) but I have ambitious modelling plans nevertheless. In addition to the ultimate Clan warlord I will be making use of some of Chilled Monkeybrains' heads which I was given over the summer. ﻿ 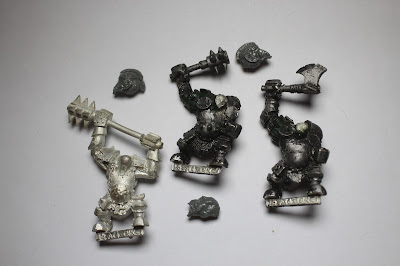 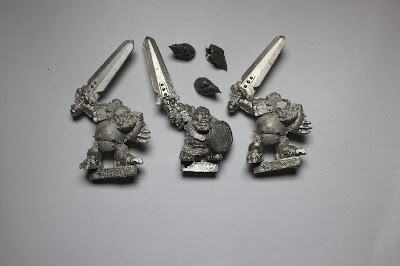 The top three armoured Fimir use (relatively) recent Black Orc bodies, with their armoured gauntlets you can't count digits so that's fine by me. The bottom three are Chronopia dwarves. In the clan fluff these guys are 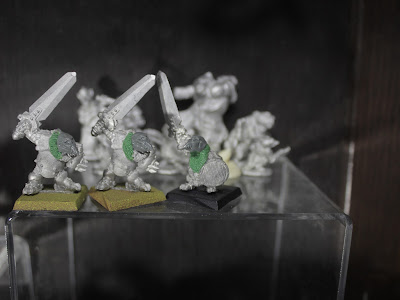 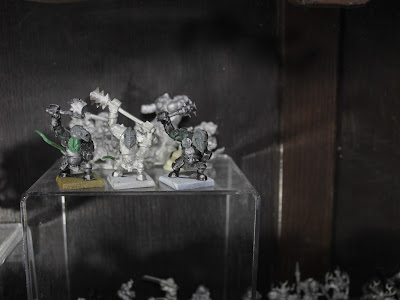 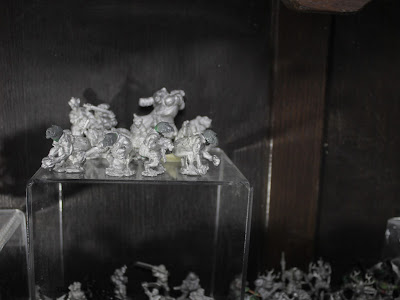 I've also fitted some of the resin heads onto Oakbound Myeri bodies to fill out the retinue. Don't mind the badger at the back, he's just an observer. 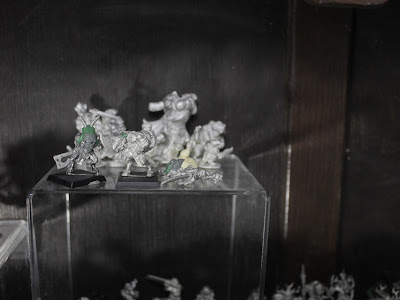 I've also played around with some beastman models. These guys are going to be young Dirach still learning the mystic ways of the coven.