Followers of Oakbound Studio will know the very exciting news we received last weekend. Alan Lee (the renowned pictographer of all things Middle Earth, designer for Peter Jackson's films and faerie artist extraordinaire) has given permission for us to use one of his paintings as the cover of the Secrets of Shandisholm sourcebook which is due for release in the summer. 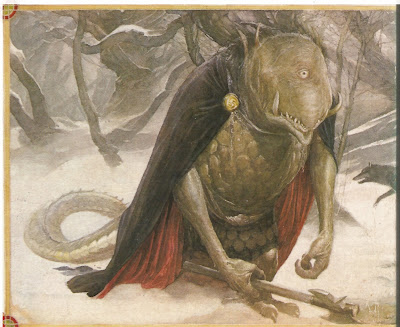 There's no need to repeat Zhu's comprehensive study of the relationship between this beastie from the 80s book "Irish folk and fairy stories 2" by Michael Scott, except perhaps to add that the first chapter of said book also provides much of the information that became Games Workshop's Fimir.


Realm of Zhu
This is my 'Limited Edition' Jes Goodwin sculpt, you can clearly see the influence. It was the grainy picture of this guy in 3rd Ed WHFB that first drew me to the Fimir, and whilst I am a big fan of the Bibby nobles the Fimm and Meargh just don't grab me in the same way this beast does. 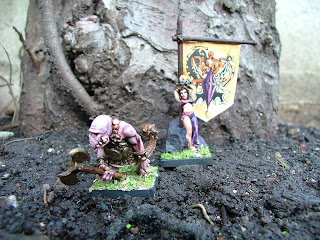 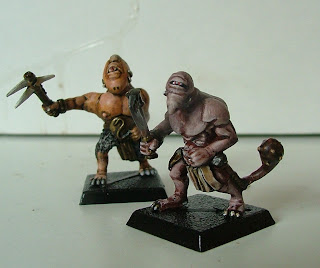 These were my first attempts to create some 28mm Fimir, I'll just drop them here as progress markers!

As I've said, the Fimir were lifted (not quite wholesale, but nearly) from the Fomorians of Irish myth, as told by Michael Scott. The book is well worth a read by the way! The Fimir never got much attention after 3rd Ed, and not that much then although they featured a bit more prominently in WFRP. This is a shame as the Fomorians are wonderful characters and deserve to be noticed, as does Alan Lee's design work! So when I began work on my Celtic fantasy world I decided the Fomorians definitely needed to be present. However I wanted them to be quite different from the Fimir which have always had quite an evil reputation. Instead I chose to blend the Fomorian myth with Maori, Aboriginal and Welsh folklore and the Skeksis and UrRu of The Dark Crystal to create the Myeri. For the record though, the name Myeri was decided on before any idea that the Maori would form part of their influence- just a happy coincidence! 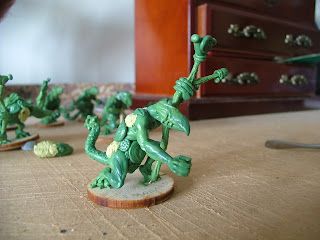 Here's one of the first wave Myeri. These guys have been around for a few years now and I still like the Froudian character of the heads, but I've been doing quite a lot of sculpting since then and for the forthcoming sourcebook I thought I ought to firm up the Myeri a bit more and release some more miniatures, especially in the light of Alan Lee's generosity. So this weekend I got to work on the first: 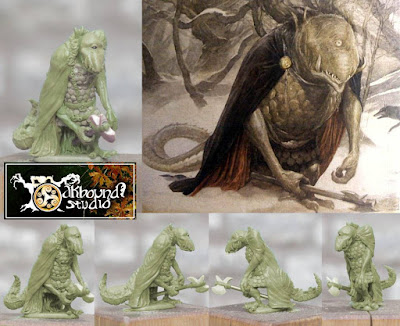 Really happy with how this guy turned out so I have plans to do several more. Trying to pin down exactly what to sculpt is tricky though. The Myeri society is made up of craftsmen and workers called Oibrithe, warriors called Losbastun, soothsayers called Draoi and chieftains called Tiarna. The guy above is definitely at least a Losbast, probably a Tiarna given his feathered ruff and ornately carved tail spike.
﻿