Reign of the Lichemaster: Kemler, Zwemmer and Krell

Stories of the return of Heinrich Kemler from the depths of his madness are as confused and shrouded as the man himself, or what is left of him. Indeed it is unlikely that Kemler ever did (or ever shall) return to sanity, for what sanity is it to call the dead from their graves and pledge allegiance to the fickle powers of Chaos?

The peaks of the Grey Mountains has been a hideout and a refuge for heretics and bandits since the earliest days of the Empire. Those cast from the towns and villages make their way to the desolate, snow-capped heights and eke out a barbarous existence preying on isolated hamlets and vulnerable travellers. Most are simply victims of circumstance and the heavy hand of justice but amongst the hidden valleys lie some darker powers which draw the outcasts into their midst. The Frugelkluft valley below the Frugelhorn is one such place. These days a small hamlet by the name of Frugelhofen clings to the wide end of the valley and there are a few farms dotted around but only the dwarves dare to go far into the Frugelkluft, and then only because of the gold seam to be found at Grimbrin's mine. The seam is dwindling and those dwarves still there continue to tap it for family pride. Back in the time of Sigmar, however, there was no settlement in the valley and the glacier which crowns its upper end reached far further down and filled the valley with a shimmering mirror lake. 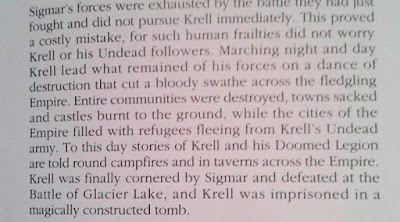 It was at this site that Sigmar's forces defeated Krell, one of the nine lords of Nagash. That battle went down in history as the Battle of Glacier Lake and the treacherous ice claimed as many victims as the great chaos champion's undead horde. Nevertheless, Krell was defeated and interred within a great, magical tomb high up in the glacier so that none should ever find it again. Perhaps it was by design that the records of the battle disappeared so that none even remembered the place where the battle had been fought, many suspecting it lay further south towards Tilea in the region of the Vaults.

Time marched on and the Empire grew. The glaciers and lakes began to recede. Settlers pushed their hamlets up into the foothills and bandits and miscreants were drawn up into the mountains. It was almost as if some power was pulling them towards the Frugelkluft.

At one time the most notorious bandit crew working the passes were the Blue-Blooded Bandits, a pack of disinherited aristocrats lead by the tyrannous and warlike former-duke Adolphus Zwemmer. Zwemmer had made a pact with a daemon of Nurgle which, when discovered, lead to him being exiled, sentenced to death and chased across the land by witch hunters. When Zwemmer was finally brought down a few of his most fervent supporters carried his body away into the mountains and buried it in the Frugelkluft valley, not far from the magical tomb of Krell. Zwemmer's daemon patron, robbed of his champion and already a low thing in the eyes of his pantheon, clung to every chance of growing in power. When Heinrich Kemler appeared, wandering in the mountains delirious and insane, the daemon saw how it could secure another mortal servant.

In return for strength, life, the service of Zwemmer with his bandit host and the use of the daemon weapon Heinrich Kemler swore to kill and commit the souls of those slain to the service of the daemon. If it thought it had secured the devotion of the necromancer, however, it was much mistaken. Kemler's wanderings were not as aimless as even the Lichemaster believed them to be. He was being guided by another purpose to the foot of this ancient glacier...

Clarity of mind restored, Kemler remembered what he had been seeking in this desolate region, what his delirium had whispered to him and what secrets he had learnt. Having dispatched Zwemmer and his small army of skeletons to raise the nearest settlements to the ground that he might, in turn, raise their inhabitants, Kemler turned his attentions and footsteps towards the glacier. Zwemmer's band fell upon the dwarves of Gimbrin's mine and Wernicke's farm, adding their former occupants to the legion of the damned. 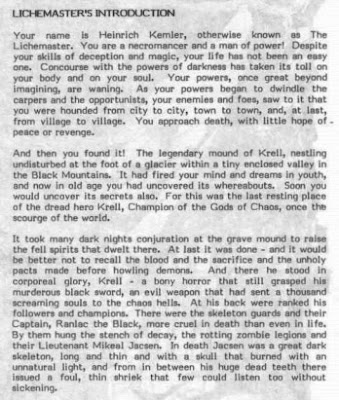 Kemler, meanwhile, had made his way through the crevasses and ice tunnels of the glacier and arrived at the concealed entrance to the tomb of Krell. The evil power that had drawn so many black-hearted bandits to the region had called to him and shown him the way. With his newly-acquired strength he was able to break the seals and release the former lieutenant of Nagash from his prison. There and then Kemler struck his second dark pact and acquired as an ally the lord of the undead and his foul henchmen. The Lichemaster and his new champions fell upon the vulnerable Bogel's farm and massacred the Kassenbrincks. Then, merging with the Blue-Blooded Bandits, they turned upon the village of Frugelhofen... 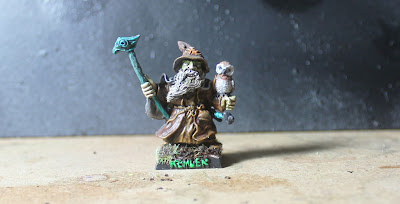 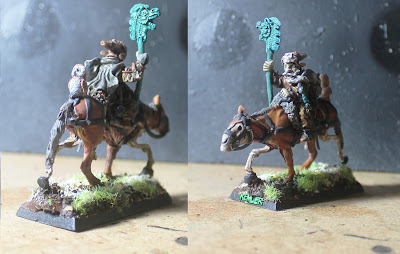 Kemler- on foot and on horseback. The models are Bob Olley Essex (the riding figure is actually called a lichemaster) and look suitably mad to my mind! The splendid horse is from Reaper and courtesy of Mr Harry. I'd imagine this is Kemler's much-abused pack animal, sacrificed in the ritual of releasing Krell and then pressed into service once more. I used some silicone putty and resin to replicate Kemler's owl familiar for the back of the horse. 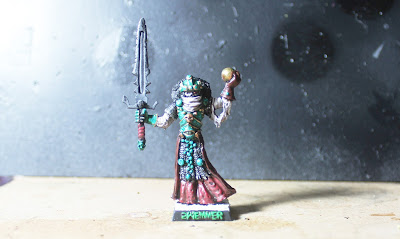 Adolphus Zwemmer- I've been after this Chaz Elliott "Undead Lord" from Ral Partha (formerly Heartbreaker) for some time. In my head he was most likely modelled on this chap from the D&D adventure 'Haunted Tower': 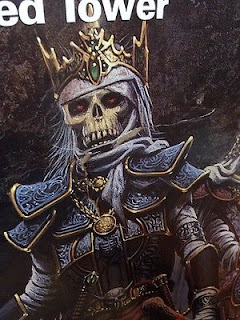 But now I track down the image and actually compare them that doesn't seem likely. Nevertheless, that's where the inspiration for the colour scheme came from, that and the BBBs are described in Lichemaster as wearing green armour. They are warriors of Nurgle after all.  The BBBs themselves will all be wearing armour of a heavy, chaos-kind. This mini is pretty massive, probably more impressive than a minor champion like Zwemmer ought to be, but maybe Nurgle blessed him with a grotesquely rotund girth to match his height? 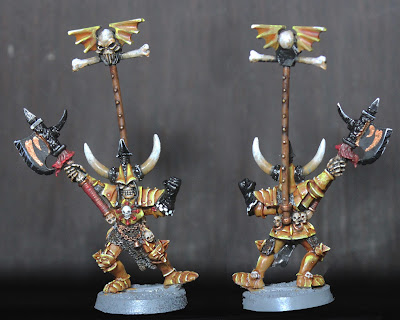 And Krell- This is a figure I used to have in my original undead army (along with the 4th Ed Kemmler) and in my eyes a preferable sculpt to the original TotL one (which I think was just a re-appropriated skeleton hero). However, when I first read of Krell in the 4th Ed Undead Armies Book I did not have the model and there was no picture of it in the book. I didn't have a GW anywhere near me and my local hobby shop had a very limited supply of blisters which did not include the lord of the undead. I did, however, have WFB3 and so the yellow-armoured champion in John Blanche's diorama: 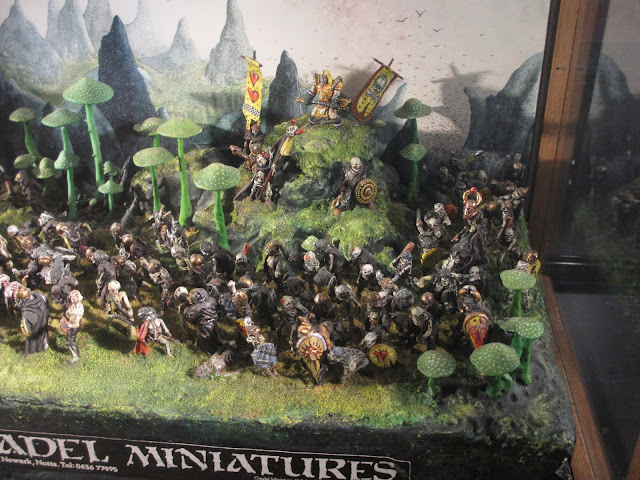 ﻿
forever became the image of Krell in my mind. He has, after all, got a large, black axe! So my Krell is painted after this chap. He will be getting a chariot to ride in to elevate him in status above Zwemmer (hence the lack of basing). I'd imagine there's quite a hefty rivalry between these two former champions of Chaos. Krell is the more powerful by a long shot, but Zwemmer's daemon patron holds the secret to Kemler's longevity and whilst it cares no longer for Zwemmer himself it is uneasy about Krell's allegiance to other Chaotic powers.
More to come as I move on to the units!

Reign of the Lichemaster: Kemler, Zwemmer and Krell