Long-term followers of Fimm McCool's may remember this post from waaaaaaay back:

When I was a kid Citadel Combat Cards were one of my favourite activities, especially on long car journeys. The first pack I got was a present from my great aunt, now sadly deceased. About 7 years ago I decided I wanted to collect every miniature portrayed on the cards and paint them to match. It took me 3 years, during which I learnt a lot about variant greenskins, the conversions of Kev Adams and Fraser Gray's painting style (I would not be using enamels to try and reproduce the work of the master!). Long story short, the collection then sat in a box, another box, a drawer and eventually made it onto a shelf while it waited for a slot in the painting queue. Almost 4 years later that slot has arrived! Now, not all that space is lack of time, I wanted to wait until my painting (and sculpting- there's quite a lot of 'conversion' work to do) skills were good enough for me to feel like I could do justice to the project. Last year was pretty manic with Oakbound stuff and there are still plenty of projects on the go, but I'm going to go a bit easier at it this year and enjoy hobby time. It'll probably take well over a year to finish them, but at least I'm making a start. So, without further waffle, let's see some pics: 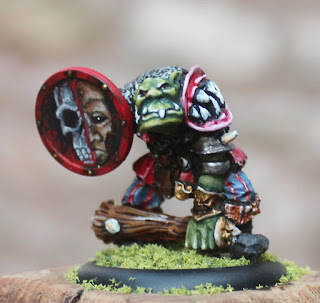 Nobrun Darkfist is the model I decided to start with, largely because he was already primed and didn't need any sculpting on... so I thought! I only realised when I started painting there were some oddities about this model. Firstly the miniature I had only had a single arm band- the one with the horn. The model on the card, however, has two. I have since discovered that there are one and two-banded variants of this model, still no idea why. I green stuffed a new band on. However there was a second weirdness because my model has nicely detailed ends to the leather straps hanging from his belt and a defined ridge around the arm band. The CC model is much rougher, with less detail on the earring tassel as well as the aforementioned details missing. Why does it seem like a much cruder casting? Maybe a thick undercoat obscured the details? Maybe photography washed them out? Who knows. If the model is still in existence it may be possible to verify, but otherwise we can only guess. 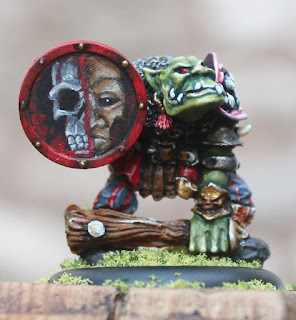 I used Foundry and Vallejo paints (with some 80s Citadel inks) to paint Nobrun. I've been getting into the Foundry system recently, not the process but the paints, and find them excellent. Some are a bit too watery for my tastes, but the triad colour range makes highlighting, shading and picking spot colours such a breeze. I hummed and hahed about his shield. The one he currently has is a 14mm 'orc' shield and looked right when I was picking shields for them. I now suspect the CC model has a 16mm 'fighter' shield. A friendly Oldhammerer is sending me some so I can fix that. In the meantime I have painted his shield to match the next CC model I am going to work on. Basing has also been a fun issue. The photography will have changed the colours, but I wanted to go as close as possible to the colours of the card. That meant finding a green/yellow flock, which proved very hard. All the railway and wargames suppliers I tried had flocks that were too green or too yellow, nothing just right. Eventually, having ordered a couple to test, I mixed my own from Javis 30 'sand' and Model Tree Shop 'Light Green' and got something that looks about right under daylight conditions (note, the picture above is not the final flock, just sprinkled on for the photo). 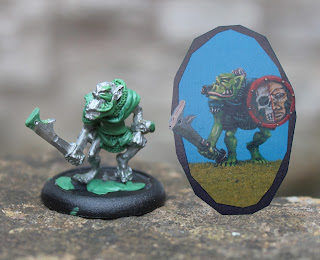 Calling Nobrun finished for now I moved on to Ylag Blackskull (the guy whose shield Nobrun is currently looking after). This guy needed some serious green stuff work to approximate the orc on the card. As Lee Morley pointed out on the Oldhammer Facebook page, the body is most likely the one on the right here:

rather than the one I picked. If I'd spotted that beforehand it would have saved a bit of green-stuff work, I was going by the head and legs on the miniature I chose. But it's all good practice. I reckon, going by the similarity of the legs on all these orcs, there was probably a blank orc body which got dressed in various ways to give these different results. Anyway, apart from a bit more modification
to the sword and torso I'm happy with my recreation. Now to get painting!