The most-asked question we've had so far about Factious Waste is "Can you tell us a bit about the campaign system?". Yes I can, here goes... 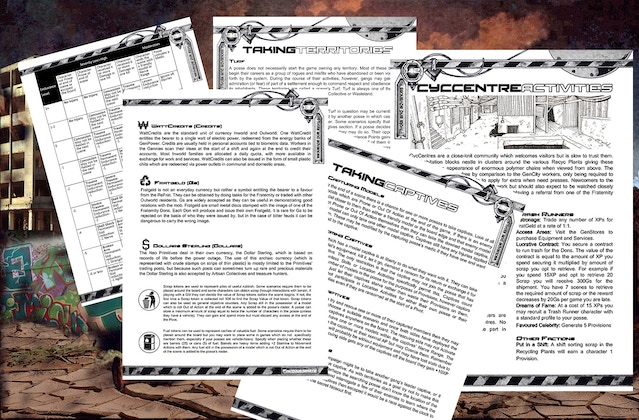 During each game a posse will earn Experience Points by taking out enemy models, coercing their opponents, rescuing captives, obtaining information, making use of their awarenesses and fulfilling any other objective given by the scenario. On average a gang will come away with between 20 and 30 XP per game, providing they haven't spent it hiding under rocks! After the game the posse has the chance to spend these XP (and any they have banked from previous games) in a number of ways.

Between games posses can choose to visit one of five outworld locations- GenCities, CycCentres, NeoPrimitive Stockades, Artisan Collectives and The Wasteland. Each location offers a number of activities for members of two or more factions. For example a GenCorps character at a GenCity can Report In to exchange XP for cash, Requisition supplies from the GenStores, Reprehend a member of another posse, Recruit a new gang member, Resource provisions for the posse or recharge their Ohmic Tactical suit. At some locations members of a faction will be Out Of Place, their presence is so detested there that they cannot perform any activities. Each member of the posse that is not Out Of Place can perform a single activity. If a posse owns any Territory they can pick activities from that location even if they choose to visit another, getting the best of both worlds. 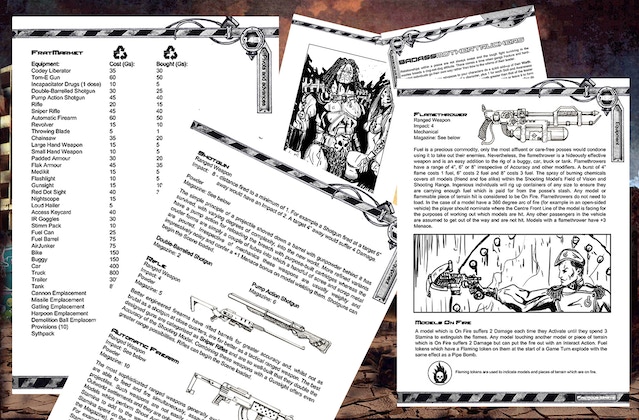 Equipment can be bought at locations, with each offering a different range of items and offering to buy and sell at different prices. There are also places that will purchase scrap and exchange money between the three different currencies used, allowing a shrewd gang to buy and sell its way into prosperity over a number of games. Initially posses will earn most of their money by trading in XP and scrap for currency, but one they start taking on contracts there's the potential to earn big bucks, leaving XP available for buying Skills and Traits. Of course, there's also the possibility of raiding an opponent's posse to steal their equipment and stash...

If any models were taken Out Of Action during the previous game they may sustain an Injury. At best this will result in them missing the next game, at worse they could die and be permanently out of the campaign. Sustaining more Damage in a single attack increases the chances of a more serious injury whilst having an active model nearby at the end of the game and/or a Medic in the posse decreases the severity. Models which are prone at the end of the game run the risk of being captured by their enemies, who can then demand whatever they like as a ransom. Or they could just take the model's equipment and dispose of them. If there's a bounty on the model's head so much the better!

You will need to make sure you acquire enough provisions to feed your posse or they will start to suffer the effects of malnutrition. 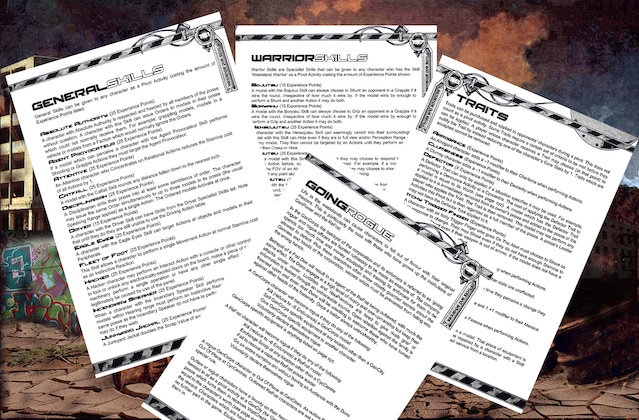 Models can also acquire Skills and Traits, purchased with XP. Skills are applied to a player's own model and increase their options and effectiveness in certain areas. Traits are applied to an opponent's model and confer a negative effect. Most Skills have an immediate effect but a couple, such as Driver and Wasteland Warrior, are gateway Skills which open up other Specialist Skills tables.