Harlequins have been on my to-do list for years, specifically mixing some 'actual' harlequins and some 'normal' elder into a force for playing Space Crusade with the Eldar Attack expansion. A couple of months back I was really pumped to get them on the painting table but with BOYL looming I put them off. Now that the big day is past for another year I have room to get them out.

They aren't actually the first things I've been working on post-BOYL, I have made a start of my Halfling contingent which has some great models old and new and which I'll be getting some photos of very soon. In fact I have been motivated to finally get started on the harlies as I'll be painting fae for The Woods in the next few weeks and want to try out some colour schemes for them which will probably be very similar.

The look I wanted for them is traditional Commedia mixed with Venetian masquerade. Cream, black and gold are dominant in both so I decided to go for a bone scheme over which the idea is to lay washes and inks.

Here you can see the array of test models I've been practicing on. All models are getting a grey primer base, washed with a blend of Army Painter Dark Tone, Citadel Black Ink and Glaze Medium. Then all areas of plate and fabric are getting a coat of Foundry Boneyard B, highlighted with Boneyard C and then White. Now, at this stage I was sorely tempted to stick with this scheme, especially on the guardian-type guys. It has a lovely stormtrooper look to it. If I ever expand this force into a small army for Rogue Trader I may do some support troops in flat bone armour.

I did a test harlequin and guardian to see how the different styles of outfit would take patterns. My inspiration was Mike McVey's High Avatar and I very much wanted to emulate that with less yellow. I'm quite happy with the way the harlie turned out, but there are a few things I'll do differently on future models. Nothing enough to make me want to strip and repaint this one, hopefully she'll blend in when the whole force is done. The diamonds on the leg I outlined first in black then inked in. This gives a neat border but makes the pattern look very dark. The traditional Commedia harlequin pattern has the diamonds surrounded by cream, preserving the light look. I'll give that a go on one of the others, it will mean I need to be much neater with the diamonds and maybe need to touch up the bone colour afterwards to sharpen up the shapes. The red on the glove has a very pink look, as it's red ink over a white base. I think for future red areas I'll need to apply an orange base before the ink to warm it up. 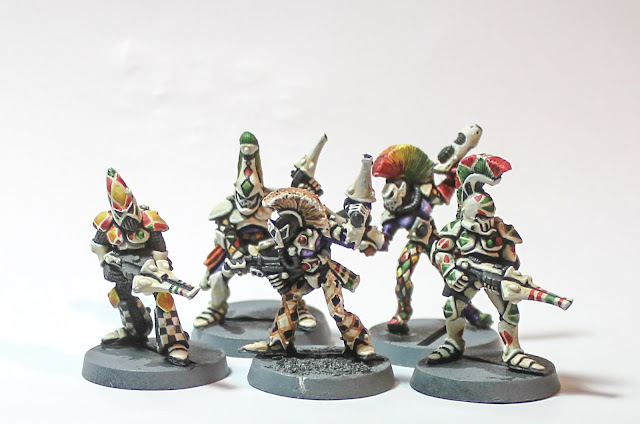 Here are a few more models taken forward. None of these are finished, I have to add the gold yet... more on that in a bit. The left guardian I was trialling diamonds surrounded by cream. They're not too scruffy, but they are much bigger than I'm hoping to do on fabric. The middle guy is based on a female harlequin costume, mostly black, cream and gold. I've introduced a bit of purple to try and tie it to the previous model, I'm hoping to use it as an accent to tie the squad together but am finding it tricky to place any in those parts of the guardians as they have chainmail. The right-hand guy is an experiment in using the triangular pattern found on many harlequin costumes. I have substituted blue for green to give a more Italian feel. I'm not totally sold on any of these guys, but they look ok together as a squad which is important.

Gold is going to be a major player, especially to give the masquerade look, but I'm undecided which to use. Normally I'd go for a Vallejo bright gold or bronze but I think I might try out one of the foundry golds for these. Usually I find them too weak to give a good coverage but here I want to just add a bit of shine whilst allowing the cream to come through so they may be just right. I'm not sure where to put the gold yet either. It should really be on their masks, but I also kinda like the hockey-mask look of the plain bone. I'm especially not sure on the first harlie I painted as it would remove even more of the bone. Maybe I should do some swirls on their weapons to indicate ornamentation? What do you think?