I painted some orcs.

I realised that I only had two sets of orcs- my Goblinoids set which live in their nice display cabinet and my Heroquest orcs. What I needed was some gaming orcs!

Sadly prices of classic Citadel orcs seem to have gone up even more than when i was doing the Combat card thing a few years back. In fact I don't think I could have begun to do that project with today's eBay prices for these chaps. There must be thousands of them around, I guess people just love them and hang on to them. I did have a couple kicking around and managed to pick up a few broken models but it seemed that the best way forward would, like with my undead, be to find old-school still-in-production miniatures. This seemed quite difficult. Most of the available orcs were knock-off red era cartoony without being anything like as well sculpted. Those that caught the look exactly (like Knightmare Miniatures' Kev Adams-sculpted, ex Crooked Claw) are still too pricey for me to get more than a small warband's worth from, I may as well get the classic Citadel ones.

In the end I decided that rather than try and capture the Citadel look I should go for another orcy classic, Angus McBride's LotR illustrations. This was especially relevant as I've just got back into playing the ICE Middle Earth CCG and GW LotR skirmish game again. 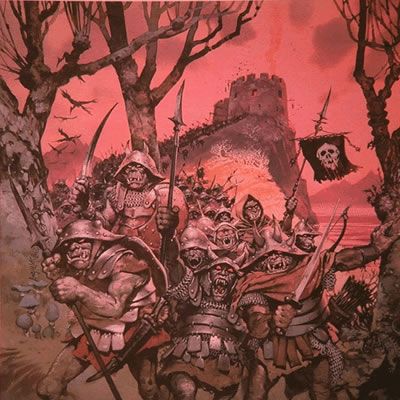 Many years back I bought some Wargames Factory plastics to make an Angus McBride orc force, but they were really too spindly in my view to do the job well. For this attempt at an orcy rabble I turned to Alternative Armies, Ral Partha Europe, Denizen Miniatures (Paul Strivens goblins) and a Westfalia goblin that fitted nicely with the Citadel Monster Starter Set I'd wanted to paint for a while.

I think they turned out as a nice orcish rabble. 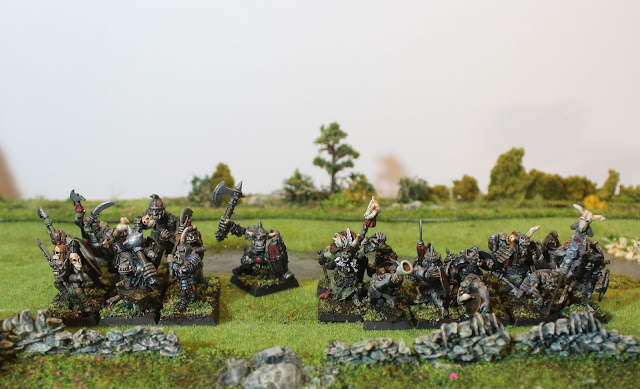 This is all I've managed for Orctober, I have another 40-ish orcs waiting to go (archers and boar riders mostly) but time is in rather short supply at the moment. Nor are these strictly finished, there are some details left to pick out and a couple of broken weapons still to fix. I want to put a big banner on the Monster Starter Set ogre. They'll do as my Orctober contribution though. :) 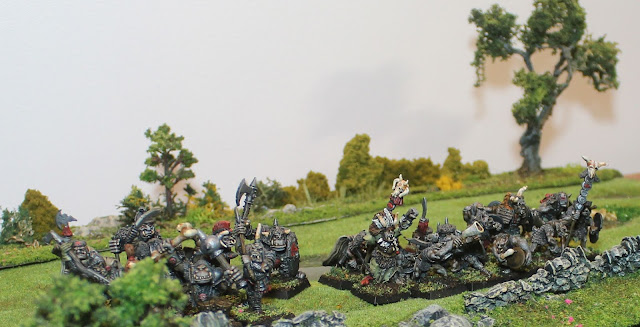 The orcs (and goblins) on the right are based on 20mm slottas and will probably count in WH as goblins but to my mind they are all orcs. After all, Tolkien didn't draw a clear distinction and there are clearly orcs and goblins of various sizes in his writings.