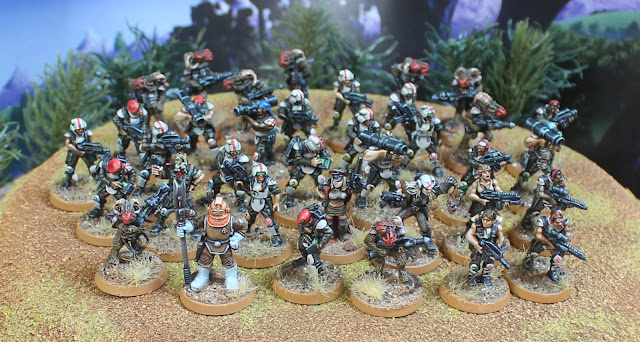 Another long-standing project has been brought to a (for now) close during lockdown. This time some imperial guardsmen to accompany the Phagons, Commissar and BOYL miniatures I painted a couple of years back. These are all ex-Grenadier future warrior troopers by Mark Copplestone, now available from Moonraker Miniatures. They're a great match stylistically with the Citadel imperial army soldiers whilst being easier to come by and significantly cheaper. I was first drawn to the range by one of the scanner operators and troopers whose helmets had those distinctive side bulges such a feature of the first wave of guardsmen. Unfortunately, for some reason, the others didn't so I had to do a bit of green stuffing prior to painting.

These are the spacefaring mercenaries known as the "Rebels with a cause", or "the Rebels" for short. Rumour has it they took their red-stripe helmet design from an ancient cultural relic. A former imperial guard unit the Rebels went AWOL after they were assigned escort to a powerful inquisitor. Once he had no further use for them they were to be disposed of, they had seen things that the imperium did not want to acknowledge. Unfortunately for him the inquisitor had put too much trust in the blind loyalty of the troops, and especially in their commissar. Who knew they would rather betray their emperor than die? Now they wander from world to world raising funds and awareness of the imperium's misdeeds, fighting for whoever will put money in their coffers and not ask questions. Following the liberation of a number of beastmen from the extremist martian cult the Brotherhood of the Iron Road they have bolstered their numbers to almost their original complement.

Blue and Yellow squads form the regular core of the force. Each is lead by an officer and consists of a comms expert, missile launcher, four regular guardsmen, two beastmen with lasguns and a beastman with a plasma rifle. Blue squad contains a flamethrower. Standard armament for the guardsmen is the autogun, ammunition for which can be picked up pretty much anywhere with few questions asked.

Green squad are a specialist covert engagement squad. Their armaments are a mix of lasguns, shotguns, autoguns, sniper rifles and a missile launcher so they have options to fit their situation. Their officer Hannah Solow is notorious for her furiosity and is accompanied everywhere by her beastman sidekick Baccychewa.

The Rebels are lead by ex-commissar Leigha Ratmiana Chutyaboloxov, known to her followers as 'the Princess'. Her command squad consists of the platoon's veterans plus the mysterious Navigator, another 'desertee' member of the former-inquisitorial retinue.