There's no disputing that lockdown 2020 has been the season of the wood elf. I have lost count of how many inspirational and wonderful paint jobs I have seen on Jes Goodwin classics over the past 4 months. The first two were enough to inspire me to do something I generally avoid- stripping painted miniatures!

When I was a foolish 17 or 18 I decided I was done with toy soldiers and gave them all away. Idiot. Well, I say all, but I did keep some and for whatever reason these Jes Goodwin wood elves were among them. Somehow amazingly preserved unpainted I then gave them an awful coat of paint to use them as tribal human allies for my Fimir. Seeing the beautiful work of talented painters in the Oldhammer Facebook groups shamed me into plunging them into Dettol to have another go. I chose to replace their flat Citadel shields with moulded ones from RAFM.

I had also kept some wardancers. Some from the 80s, others from the 90s, including the wonderful Warhammer Quest wardancer. Unfortunately when I was doing my Egyptian-styled high elves I thought it would be a good idea to remove the heads from the 90s wardancers and replace them with Anubis masks a-la Stargate, My sculpting skills were a bit rough back then and the result was not an improvement! I have therefore had to replace the heads with what I had to hand- three dark elf plastic heads and one of my See Thirty Amazon warrior heads. I've also had to replace a couple of weapons that had been replaced with Ankh staffs. Fortunately the Jes elves and the WHQ wardancer remained in tact!

A couple of these classics are new additions to the ranks, thank you to Jason Lye for providing the reinforcements and swelling the unit! 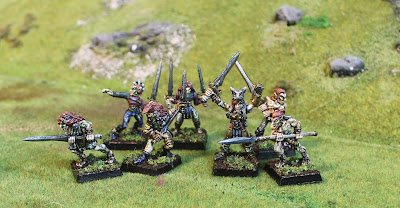 The Warhammer Quest wardancer is probably one of my favourite miniatures ever and one I wanted to do a really good job on. For the moment this is what I have been able to achieve, but he may be tweaked or even stripped and repainted again if I ever feel I can improve it! I kinda feel he needs more cream... Oh, worth noting that when glazed I intend to give the gemstones a coat of gloss varnish. I just haven't ventured out with the spray cans yet. 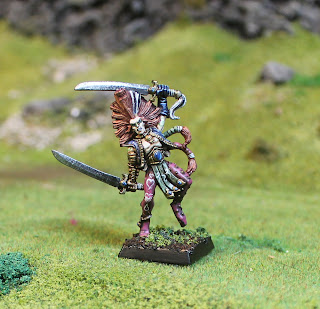 Some non-Citadel miniatures in the mix. A Grenadier (now from Forlorn Hope) champion and Celtos Formorian Siren (from Brigade models) seem to fit in just fine. For now the Grenadier mini is leading the army due to his larger size and lordly bearing.

This was also an opportunity to paint a Trish treeman, thanks to Ross Hubbard for that! The first White Dwarf I ever bought featured a battle report with one of these chaps in a wood elf force so I was considering an homage to that one. Unfortunately it was largely brown and much of the bark on this beautiful sculpt is clearly birch so I decided to go with a green/silver scheme. This is such a good model that it just paints itself. A couple of hours with washes and drybrushing is all it takes. 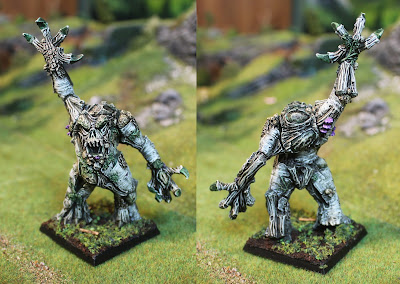 One thing I was lacking was archers. My original wood elf army had the 5th ed plastic archers but I really can't stand them with their bulky cloaks so I wasn't sad that they had long since disappeared. Instead I opted for picking up a unit of the original plastics and padding it out with some silvan elf archers (for which thank you Harry). Apparently archers are a bit of a must in wood elf armies. Looking at these I am reminded that I happened to be listening to the audiobook of Lord of the Rings and whilst painting these the company were at Lorien. A lovely coincidence and I think I shall call their leader Haldir.

So that's wood elves added to my stock of small forces from across the Old World. There's not a lot I'd want to add to them, happy to keep them small. I'm not a fan of wood elf cavalry but maybe a chariot sometime. It'd be great to pick up some classics too like the Scarloc's wardancer and the Warhammer Quest elf, but other than that I think the woods are suitably guarded.