You'll know that I love Heroquest. It was what got me into gaming. I recently told my cousin it was all his fault for bringing his copy to my grandparents' house one Christmas but really it's more a case of indebtedness rather than blame. On the side of the box and in the promotional material you can see some beautifully painted miniatures (probably the first I ever saw, way to set the bar) by Mike McVey and I remember being very confused that they don't appear to match the box plastics. There's a simple reason, to guide the production of the plastics and provide figures that could be photographed for publicity that needed to be set before the machining could be accomplished GW produced 28mm metal 'prototype' figures. If you look closely at the White Dwarf adverts you'll see the board, books and card components are different too- simple print and cut prototypes. The furniture is different too, perhaps you didn't realise but there was METAL PROTOTYPE FURNITURE for Heroquest produced as well...

I have been very fortunate in that I have mostly managed to acquire my 'holy grail' miniatures, perhaps I have very modest tastes, but Heroquest prototype miniatures are truly hens' teeth rare. The chaos warrior was given as a trophy for a young bloods' painting competition in the early years of Games Day so there are a few of those around. Chaps in the casting room were, I believe, allowed to cast up miniatures for themselves and pay lead weight for them. This appears to have happened with the gargoyle and a few of the wizards of Morcar miniatures, a couple of gargoyles have floated across evilbay, Fanrax the necromancer appears in a few White Dwarf undead army shots, the Orc Shaman and Storm Mage pop up so frequently on auction sites now that it's quite likely they have been the subject of some recasting enterprise. The others though? Not seen, ever to my knowledge. The best and most complete collections I am aware of do not contain a Heroquest Fimir, Skeleton, Dwarf, Goblin, Barbarian, Zombie, Sorcerer, Mummy, Elf, Orc of Wizard. Probably they weren't 'special' enough miniatures to have been cast by workers back in the day, Heroquest after all was aimed at a much younger age group and only sentiment and nostalgia have made it worth anything now.

The Mike McVey originals are now in a cabinet at Wargames Foundry, with the exception of the Chaos Warrior and Orc-which is sad because I would LOVE to see how fine those lightning strikes on the warrior's armour are in real life! BOYL gives me an excuse to go and stand in front of the collection dribbling... They're alongside the Space Crusade prototypes and also the Advanced Heroquest prototypes which are a little more common. The Fighter, Wizard, Henchman and Dwarf were actually released in a limited blister set available in store so there are some of those doing the rounds. The Elf and Skaven are much rarer, the Skaven especially. In an earlier post I showed the Fighter, Dwarf, Wizard and Henchman I had been able to procure thanks to some very generous people. The Elf was replaced by a "Time Warped Wizard" (not a wizard at all but unreleased Citadel Wood Elf General) released by Foundry a few years ago and thought on first glance to be the AHQ Elf. It isn't but the pose and equipment are very similar. Recently I was sent a mystery package and discovered, to my delight, the missing Elf. Thank you, you know who you are! Allow me to present, then, the complete line up of unreleased prototype Advanced Heroquest Heroes. Just the Skaven to find.

Exciting though that all is, it isn't quite Heroquest. I want those figures I first saw upon popping the lid off my first ever miniatures game 32 years ago. Having missed another gargoyle on ebay I decided to do something about it. Perhaps if I undertook a little sculpting exercise my sculpting might improve and I might somehow mysteriously call the genuine articles in my direction... well, I can dream. At any rate I now have at least a nice proxy set and had some fun trying emulate the masters. 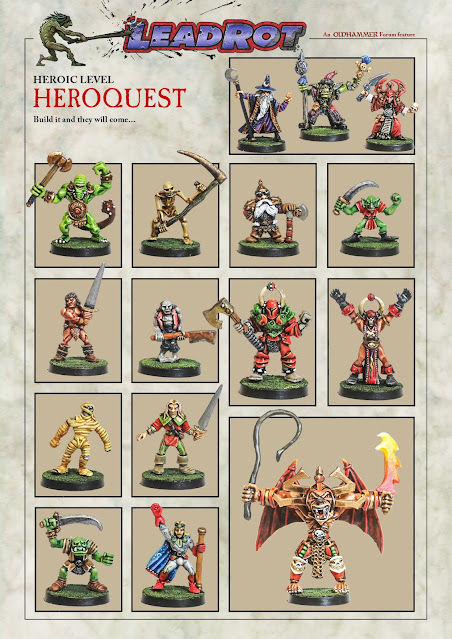 The eagle-eyed among you may note that Baroush the Storm Mage is missing, I actually managed to procure a genuine prototype whilst working on sculpting the others, so perhaps it is working! 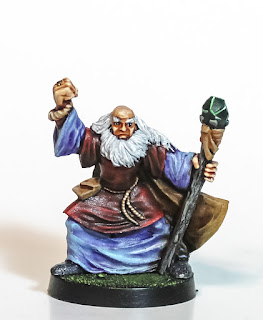