What to do when you find yourself back at work full time with no daylight hours to hobby in, the pressures of adult life pressing down on your shoulders and busy-ness sweeping the joy from 'free' time?

You take on a new project of course!

Dave, perhaps better known in blogsphere as Snickit, has launched an army building challenge to run up to BOYL 2022 which he has titled The 333 3rd Ed Challenge. The aim is to paint 333 points of troops each month until BOYL, resulting in an (approximately) 3000 point force to put on the table. Armies can be chosen from any 3rd Ed era list. I have a fair whack of Chaos troops unpainted on my shelves so this felt like a good excuse to get some paint on them. 333 points of Chaos Warriors is not many models, that should be doable, and it would mean not having to buy new miniatures... right?

Of all the Chaos powers it is Slaanesh that most draws me. That's something that's probably best not probed too deeply (as the actress said to the bishop). Essential sleaze aside I like the more complex image painted in Realm of Chaos that Slaanesh is about love of comfort, luxury, easy life. That's why it rubs up against Khorne which (despite a love of blood and skulls) feeds off love of unrest, conflict and challenging situations. My idea, then, is to build a more covert Slaanesh force than an out-and-out display of genitalia. Rooted in the history (real and propaganda-motivated) of the Italian City States of the 14th and 15th centuries with houses like the Borgias, Medici, Sforza and Malatesta vying for control the plan is to build a Tilean force representing a corrupted family and their troops. Each member of the family would head up their own warband rolled from Slaves to Darkness then I will fill the remaining points with appropriate troops to make it a semi-viable army. 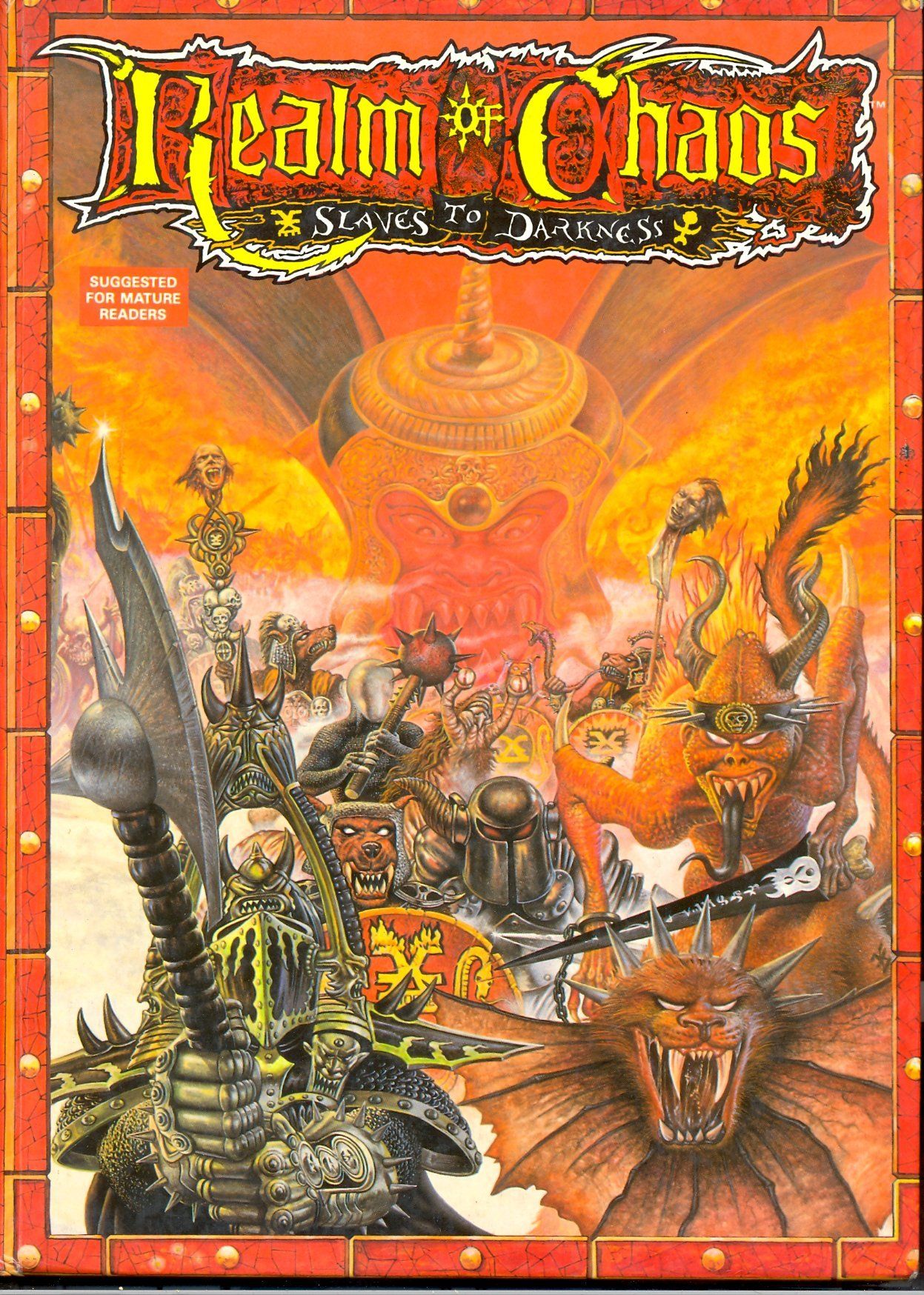 For the leader of the army I wanted a grotesque caricature of a pontiff representing all the worst features of the medieval papacy, an institution rife with the opulence and degeneracy that Slaanesh would be proud of. Having thought about it I suspect there is also more than a little influence from the Sandman comic series where a particular Psychopomp (conveyer of souls to the next life) is depicted as an obese and pox-scarred villain. There are a few cardinal/bishop miniatures around but none that really play on this grotesque image of a supposedly holy figurehead gone bad. With the release of the new Dune movie imminent I wanted a fantasy Baron Harkonnen to head up the debauched stream of filth. Jamie Loft of Old School Miniatures suggested using a Foundry orc as a basis (they are big fellows and appropriately garbed in renaissance attire) but it seemed daunting cutting off the arms, legs and head to make something that looked overweight but humanly proportioned. HOWEVER, the dwarfs from Foundry have arms about the right size and no legs to speak of... At BOYL earlier this month I had a good sift through the Warmonger dwarfs and decided on one that would suit my purposes. I would have liked to have Kev Adams sculpt my head on him as he sometimes does at BOYL, but this year he wasn't sculpting so I will have to do that myself, adding an excessive papal mitre. I wanted him carried by an overburdened donkey or mule so again went diving into the Foundry ranges to look for one. Almost all of their pack animals are sculpted with baggage attached, which wouldn't work for this purpose, but I did find one in a Darkest Africa explorers pack which will suit. It probably needs the legs reposed a bit to indicate the enormous weight of its rider.

Having selected the general it was time to head to StD and roll up his personal contingent. Having selected his initial 'reward' (enormously fat) I decided to roll twice more for his personal attributes giving him rotting flesh and a crown of flesh (tongues) which I guess he hides under his mitre! Or maybe it makes up the mitre itself... Suitably disgusting attributes for the slimy wretch. I rolled him 3 sets of followers- 9 Dark Elves, 8 Chaos Cultists and 10 Beastmen. The Dark Elves I have a handful of in my collection, but they look too war-like to fit comfortably in the higher levels of the corrupt court. I would have loved to do a unit of Foundry's Revenant Elves but at £7 each that's not going to happen (I did buy one represent the leader of another band). Instead I have opted to buy some of the former-Grenadier Dark Elves from Forlorn Hope, excellent value and a great company keeping some lovely old miniatures alive. These will work nicely with the theme and have the added advantage they already have crossbows (an arming option from the StD followers list).

The cultists I would like to have as cardinals, but whilst I would love to have Victoria Miniatures' Monty Python Spanish Inquisition featured again the price drives me off. I'm struggling to find alternatives, monks with sculpted hats on still looking too dishevelled. One option I am considering (and will probably go for) is the Warmachine Choir of Menoth miniatures. They look suitably ecclesial, not too sci-fi and like they could easily be given cardinal-type headwear to mix them up a bit. A bit beyond my budget at present still, so might have to back burner this unit for now and see if ebay will throw any bargains my way. 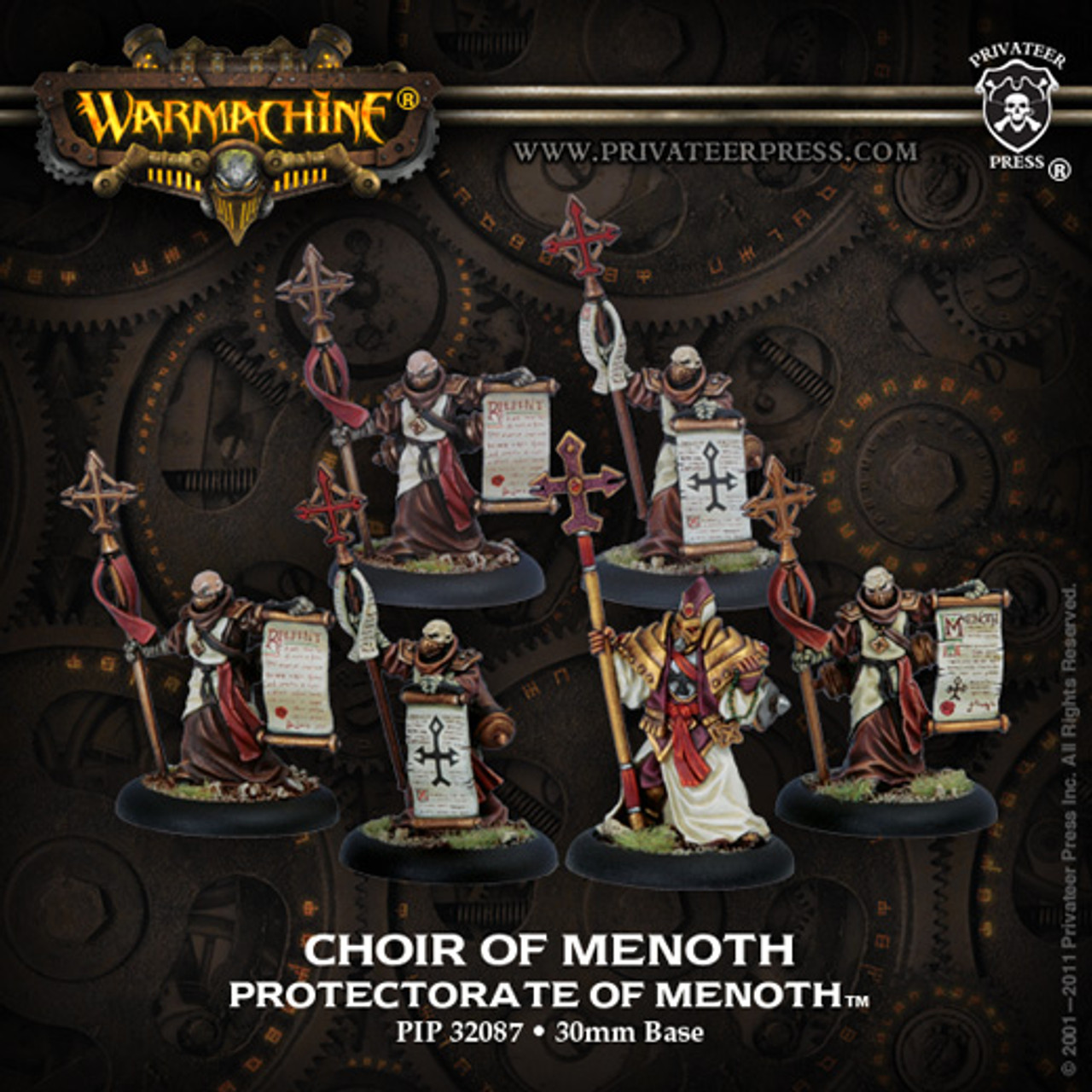 I have a lot of beastmen, including a fair few non-goat beastmen which are my preference. However they all look like an unruly, savage mob far better suited to a warrior warband than an ecclesial one. They will (depending on rolls of course) get use in one of the other warbands later on. For this one I have decided to go with the 4th ed monopose plastic beastmen that seem so universally unpopular. Their regimented look makes them fit nicely for an honour guard and it's my intention to putty clothes and gear onto them to make them look more like a papal guard. I picked up 30 of these from generous people at BOYL who knew I was looking for them. I'll start with the 10 I rolled for now and probably expand them when mopping up points at the end. 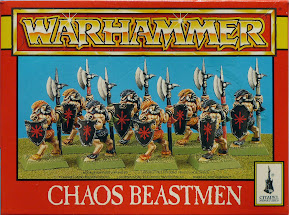 Leaving aside the 8 cultists for now then the first month's painting looks like:

That's 340pts, which fits just fine. Better get cracking though, there's a fair bit of putty and conversion work in there and we're halfway through October already!

Oh, and as to not buying any new miniatures... none of these were in my collection before the beginning of October! I didn't buy the beastmen, but the rest were purchases especially for the project. Good start there Fimm!