The 333 3rd Ed Challenge- Retinue of the Crimson Countess

This was originally going to be the warband of Luxetia Bourgeoia, a half-elf sorceress and daughter of Vitolio. However, having rolled the warband (you can see it for yourself on YouTube) I decided that the attributes I had rolled better suited the strange, desiccated sorceress I picked up in the original Diehard Miniature Kickstarter. I therefore decided to save Luxetia for December and give this warband to a previously un-envisaged character.

The Crimson Countess is the great, great Grandmother of Vitolio Bourgeoia. For half a decade she has been believed to lie interred in the family crypt. In fact she had sold her soul to Slaanesh many years before her offspring took the same path. Having attained semi-daemonhood she was summoned by Vitolio to help with his rise to Psychopomp and now she reigns behind the scenes 'advising' her descendants on how to hold onto power as firmly as she did. 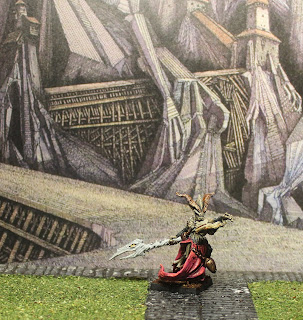 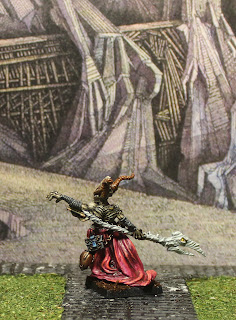 The Countess' retinue is made up of the Crimson Bulls of the Bourgeoias. These terrifying fiery beasts and sent to quash any rebellion against the house.

These minotaurs were converted many, many years ago using Ogre Kingdom bits to fill in missing weapons and puttying some rough flames to hide damage to the heads and make it look as if they were stepping out of fiery portals... to disguise the fact that none of them had their other legs! My original intention was to use them in a Chaos Dwarf army around the time of Tamurkhan, but that never happened and they languished unpainted for ages. My early sculpting work was too stubborn to be undone so I just had to paint it and hope for the best! 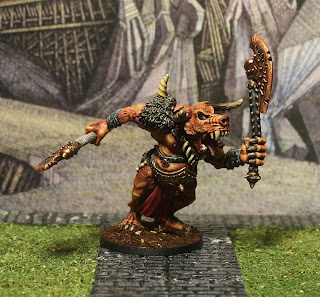 I only rolled two minotaurs and failed the roll to make one a hero, but as I was painting minotaurs I thought for consistency I would paint all the ones I had. Including my absolute favourite, this Trish Morrison minotaur lord, he's a beast! When the points are totted up at the end and extra units recruited I'm sure I'll find some allowance to add the extra mino and a hero to the warband. 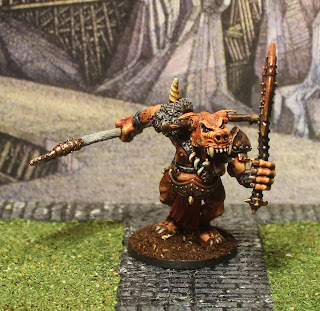 The three beastmen I decided should continue the bullish flavour so I picked out three lesser minotaurs to represent them. I have since found a fourth lurking on the shelf who may have to join them! The one in the middle is one of my absolute favourite Chaos models (two in one band!) so I really enjoyed painting her/him/it(?) up at long last.

I also topped up the points with part of Vitolio's warband I didn't have last month. As previously mentioned these are the Choir of Menoth Warmachine figures, nice ecclesial-looking acolytes for the dark pontiff. There are actually only two poses in here, I bent the scroll arms a bit for variety. Unfortunately they really don't rank up so well on 20mm bases... 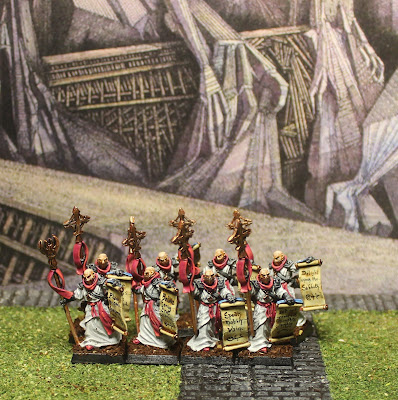 The scrolls read corrupted versions of some of the 10 commandments. In true Slaaneshi style they seem like they are promoting proud liberal values but taken at face value they can all be twisted to serve sadistic purposes. 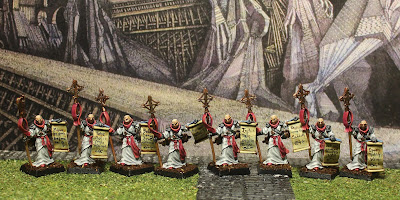 And here's the whole force so far. Definitely getting somewhere at 20% of the completed army and still having a nice cohesion thanks to a deliberate choice of three colours used in various mixes throughout. 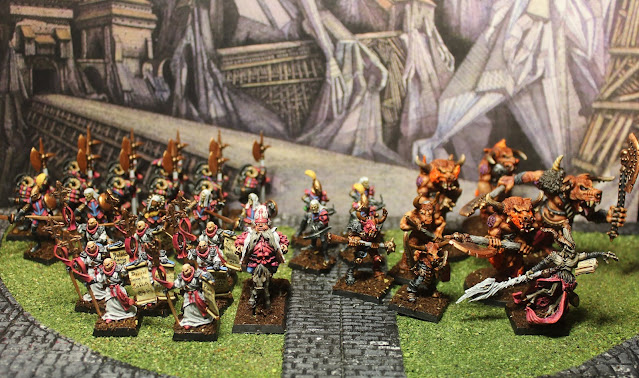 The 333 3rd Ed Challenge- Retinue of the Crimson Countess