Ok everyone, you know how this goes... 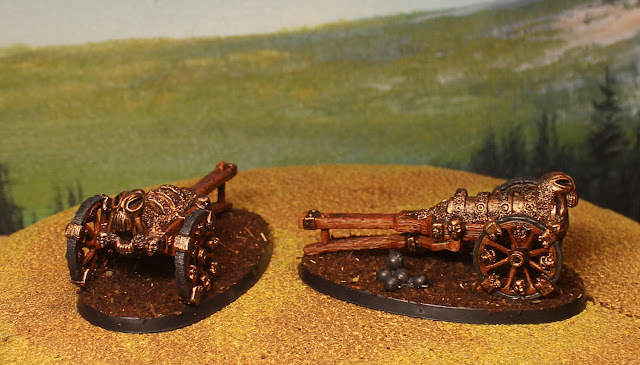 These cannon were the inspiration behind this month's 333(ish, 334 I think I worked out in the end) points. They're (we think) previously unreleased Hinchliffe pieces that Mike received among the moulds he purchased when he took on their fantasy range last year. With all those ornate bands and skulls they had to be chaos cannon, Khorne possibly? Well, I'm doing Slaanesh so that will have to do. There are also a couple of nifty catapults which I'm hoping to ge ttogether as Undead and/or Orc/Goblin war machines.
Of course they would require crew. There is actually a kind of alien lizardman crew with the machines but I wasn't so keen on the gunners as on the guns themselves. And, of course, behind big guns you need short engineers...
You can see just how I rationalised my decision and inserted artillery into a chaos army with no war machines in its list in THIS VIDEO.

Here's the crew of the cannon, mostly White Knight/The Assault Group with a couple of Citadel models. Thanks to Matthew Street who donated most of the figures. I am glad I got these done before he got started on his puff and slash dwarves for the OWAC... they will definitely not be able to compare! :D

The mortars' carriages are from RAFM Crecy guns with the stocks cut, shortened and angled to elevate the barrels. I experimented with using the same wheels as on the large cannon but as the mortars are much smaller this looked a bit odd. I think they're similar enough to work with just keeping the colours consistent. The barrels themselves are the scroll cannisters from Warmachine Menoth preachers with one end chopped off and hollowed out. Again a mix of WK/TAG and Citadel crew thanks to Matthew Street. 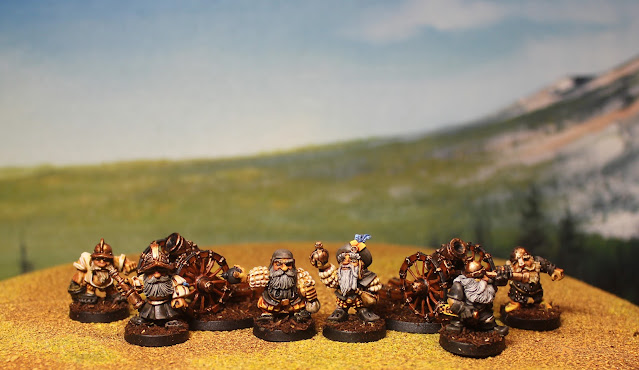 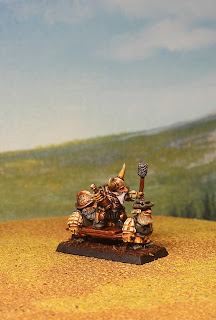 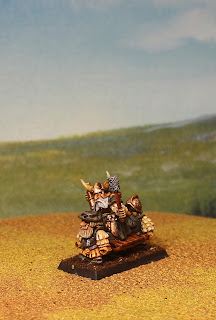 I had originally planned to use the bearers to carry the mortar shells, but the one provided was far too large for these mortars. Instead I used them to give a chief engineer some additional height from which to direct operations. Chief Engineer Bald Rick (who wears a helmet to keep his dome warm, with horns to demonstrate there's nothing wrong with his virility) is cobbled together from a plastic Mantic dwarf, WK/TAG arms and a Citadel Fantasy Regiments head.