From the timeless worlds of space... The martians have landed!

This time it's not about those pesky Techpriests, for something else lurks on that dark, forbidding planet!

I've mentioned to some people how I've been making a War of the Worlds based board game called TRIPODS! which is currently in playtest stages (If anybody happens to be of the steampunk persuasion and attending the famed UK convivial 'Weekend at the Asylum' in Lincoln you may have the chance to play (and even take home if you're VERY lucky!) one of the first prototypes. I finished the Tripod model this morning and it has been posing for shots which will be turned into artwork for the game. The pen and ink sketches for the board and cards have been completed but my other half is going to produce oil paintings for the characters and Tripod art over the next few months, based on photos now taken.

Here's a brighter shot for an all-round view. I wanted the Tripod to look like it had a kind of musculature, the book mentions that Martian technology seems to have evolved without the wheel and it seems the best way of avoiding any kind of rotary motion in creating a machine is to use a kind of  advanced 'smart' technology, using memory materials to create sinews and tentacular devices. The 'hood' of the martian machine is based loosely on a cobra and intended to give an impression of the shape of the creature within, with a few of the pilot's creepy tentacles protruding from gaps in the scales. It's hard to see from this angle, but the top of the Tripod has a hatch where the martian enters, the ridged panels down the 'spine' of the machine extending to form a ramp for entry. The arrays around the front of the hood are mirrors and lenses for increasing visibility, an extension of the periscopic device used to survey and aim the heat ray from the cylinder pit. The heat ray itself is the small brass 'funnel' wielded by one of the machine's tentacles. There is a similar box from which the black smoke issues. It looks fairly harmless until.... 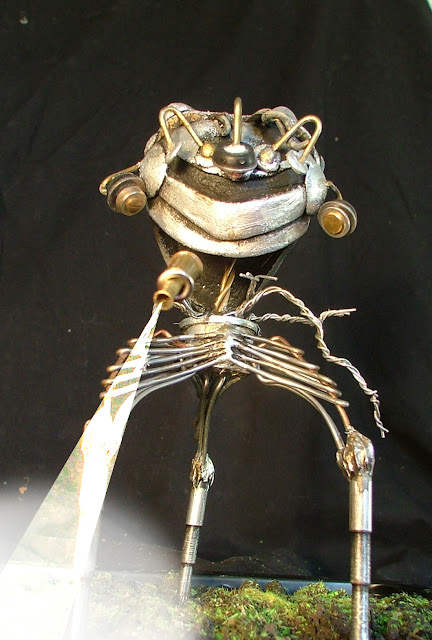 I'll post some more pics of the game art as it progresses.

From the timeless worlds of space... The martians have landed!

Email ThisBlogThis!Share to TwitterShare to FacebookShare to Pinterest
Labels: board games, modelling, painting, sculpting, Steampunk, tripods!, War of the worlds