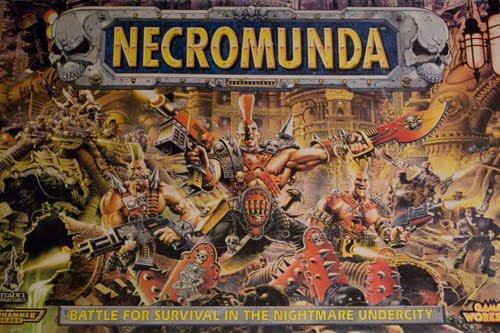 Following the visit of Inquisitor Jordan Korvax to the region of Duct’s End a recommendation was filed with the Governor Puritan of Necromunda that a “Dedicated, loyal and well-equipped battalion of the Imperial Guard” be posted to guard a series of ancient pipelines which stretch under the Sump Sea for unknown distances and to destinations unrecorded on any charts. The Inquisitor himself had ventured into the pipeline with a band of eight of his most trusted henchmen. Only three, including Korvax, emerged, upon which he ordered the entrances sealed.


Korvax left Necromunda, rather quickly, having issued his recommendation, whereupon it duly got filed in an unimportant section and sent to a menial in the 8th Necromundan who recruited a selection of ganges from Duct’s End considered the best the locality had to offer- not particularly special by Necromundan standards.  This ragtag bunch were given weapons, fatigues and basic training in the 8th before being posted back to Duct’s End to stand sentry. There they stayed , forgotten, for several years. 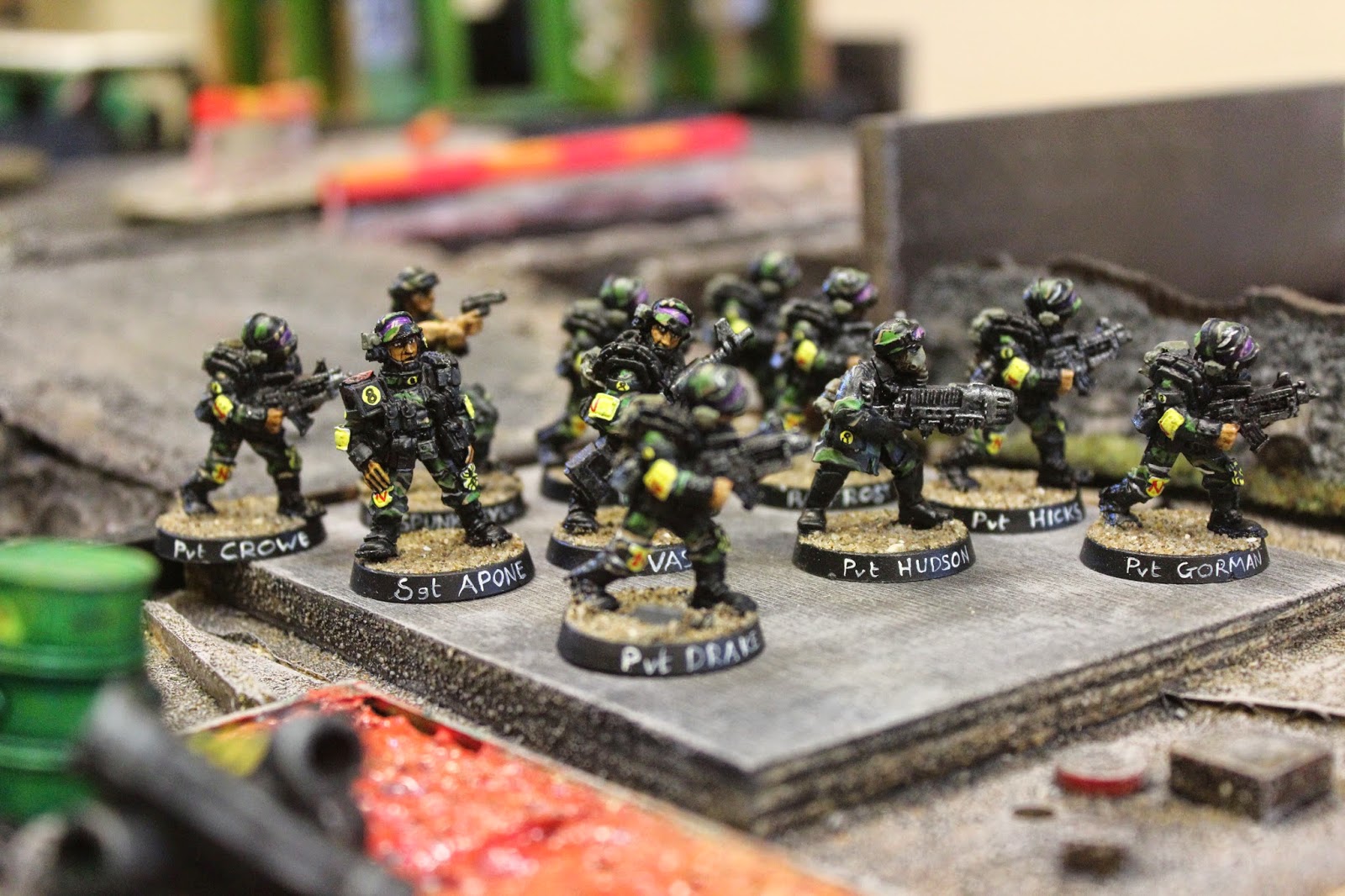 Eventually the militia bored of endless days stood around a disused pipe and began to hanker after some action. They had been trained by the famous ‘Spiders’, they were Imperial Guard, they shouldn’t be stuck in this dead end town sitting on their backsides while their equipment rusted. Sergeant Apone, the only officially appointed leader, decided enough was enough. They had a sanctioned status and by the Emperor they were going to use it! From their base in Duct’s End they began to spread out through the Underhive. Mostly they met with sneers and thrown rubble, but in some places the insignia of the Imperial Guard was enough to wow some of the residents and the Militia occasionally receive requests to join their ranks. 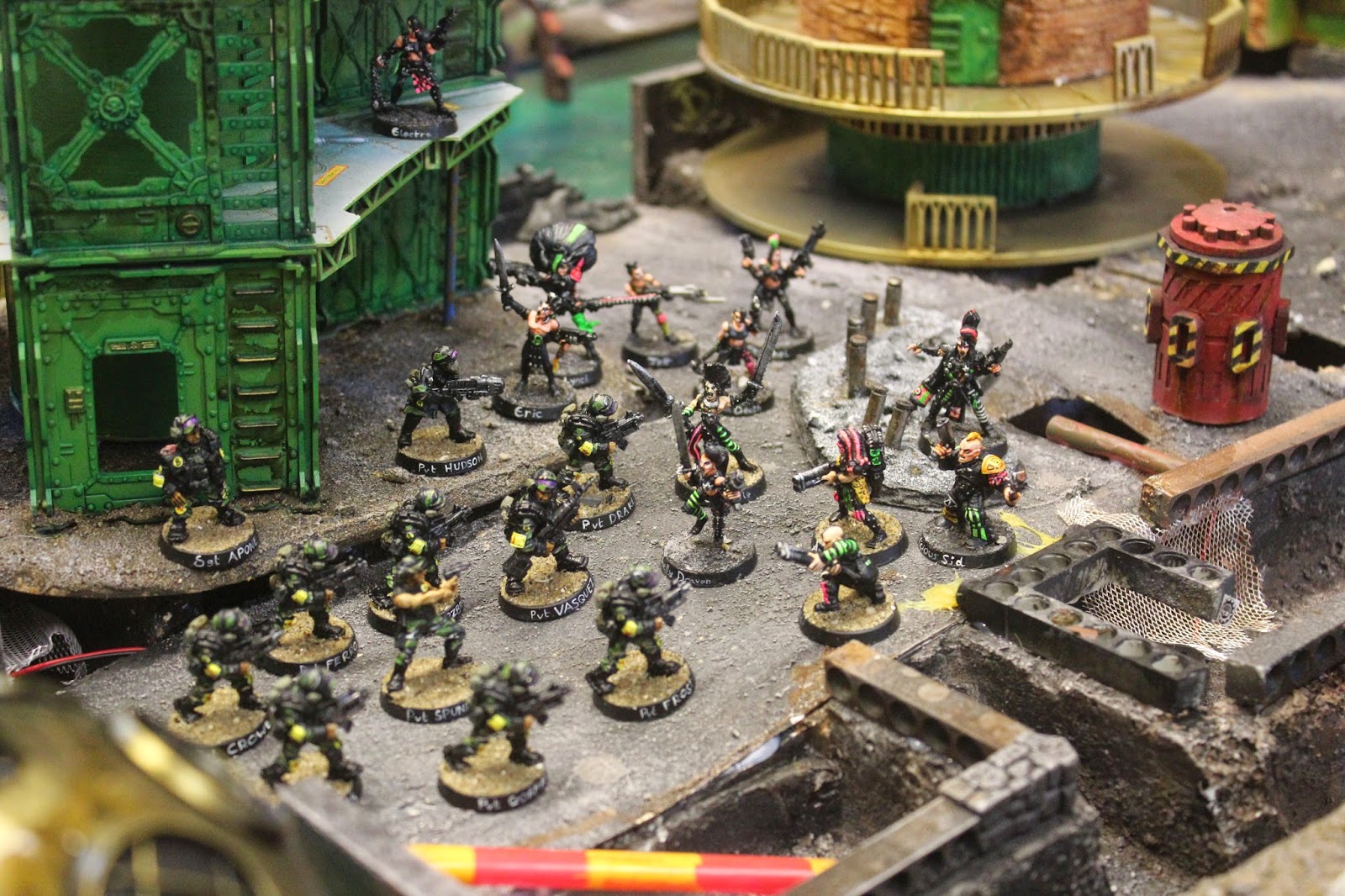 Sergeant Apone has maintained control of the Militia with tough discipline. He took to the handbook for Imperial Squad Leaders like  duck to water and instils the ways of the Guard to his men as best as he is able. Given his own inexperience and the nature of the Militia this is a far cry from the battlefield organisation of the Guard, but in the Underhive scuffles in which they normally participate their mish-mash of drill and pure grit serve them well. He is proud to own a shiny, new-issue Boltgun, mark of an Imperial Officer, and always carries it as his badge of office, taking every opportunity to demonstrate its capabilities. 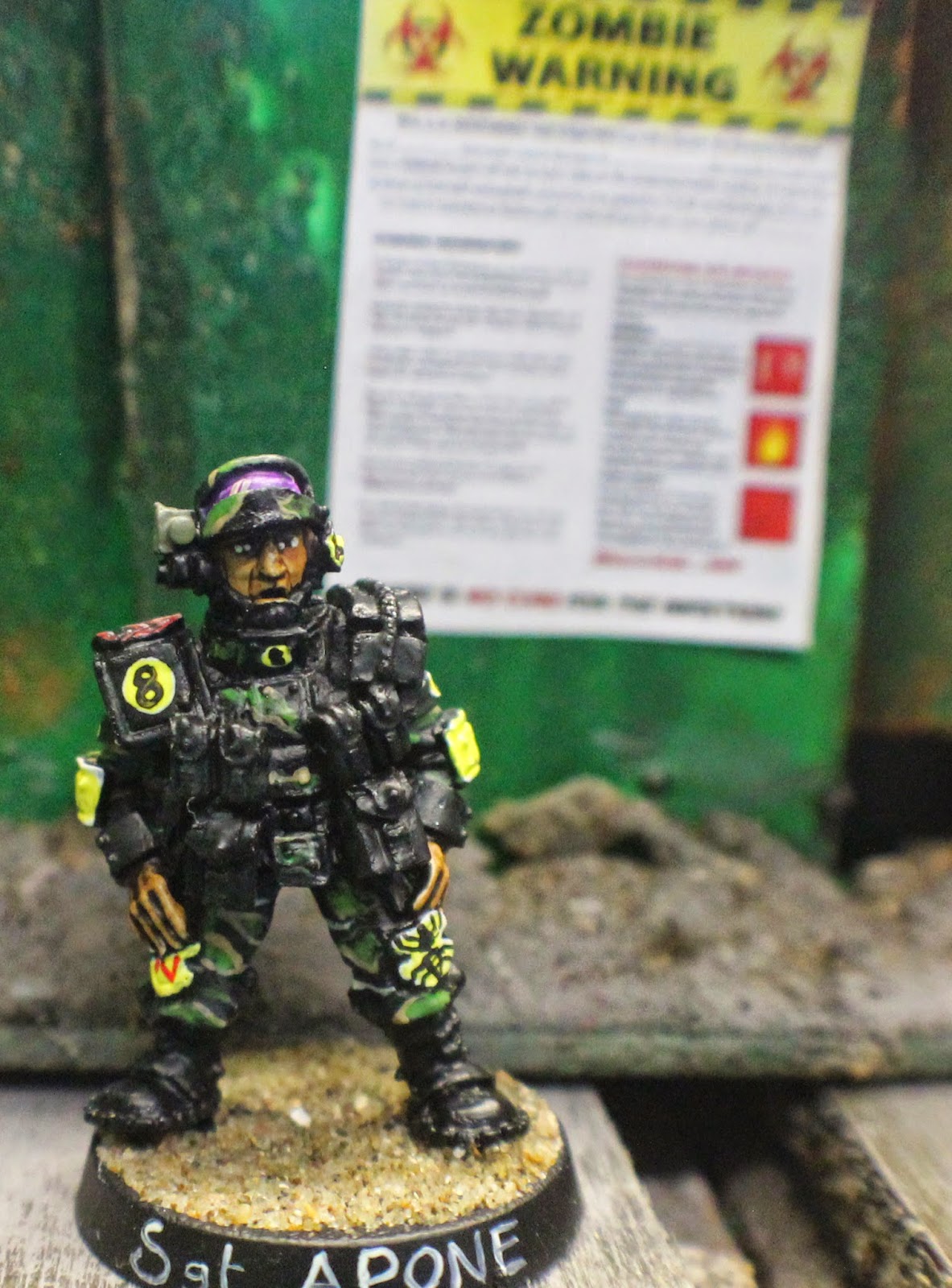 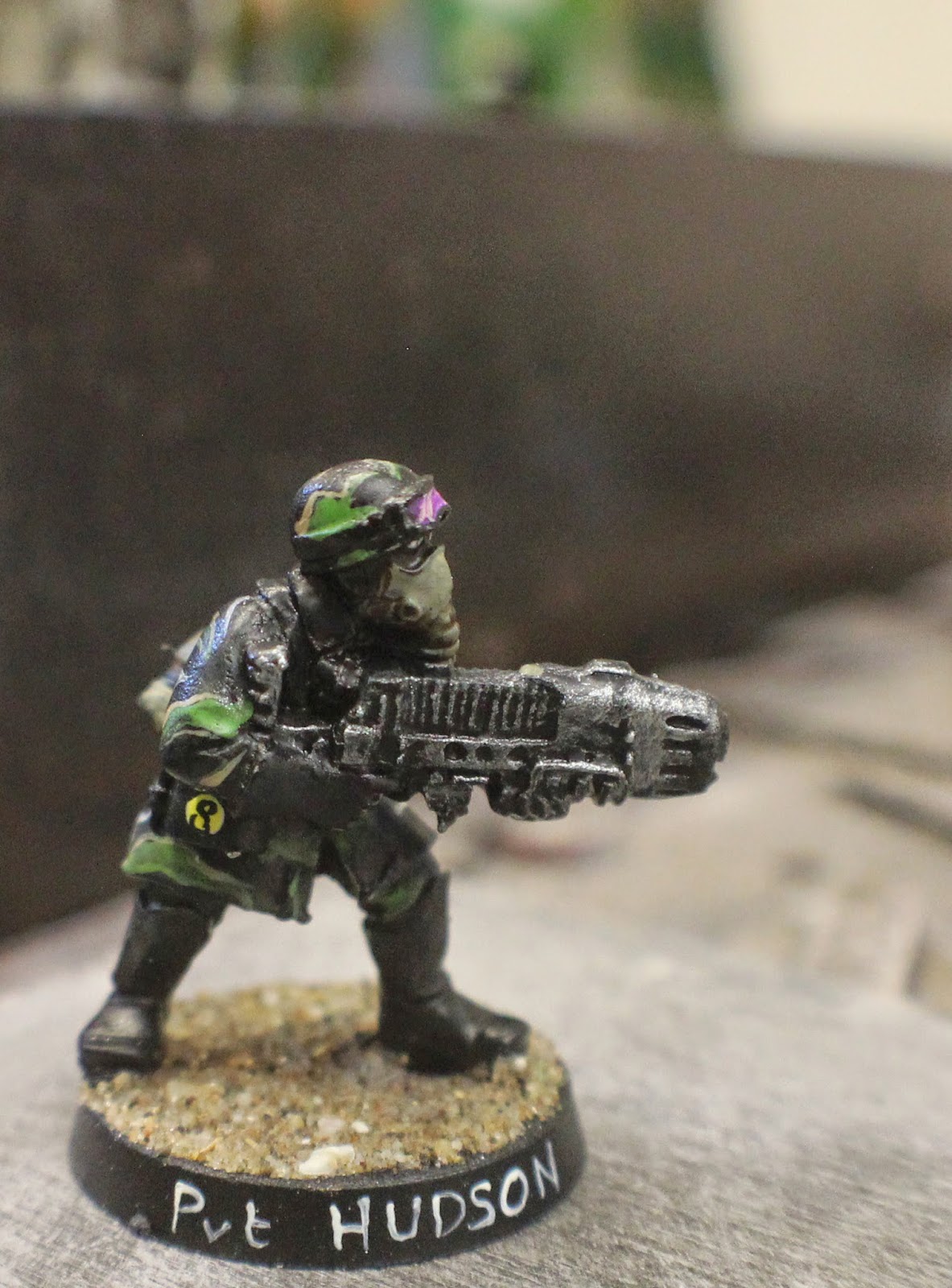 Corporal Hudson was appointed by Sergeant Apone to carry the Militia’s Plasma Gun, the concession to “well equipped” made by the pen-pusher who authorised their creation. Hudson is one of the more reliable of the Militia and usually turns out to weapon drill but Apone thinks he might be the type to try a hostile takeover. Giving him the Plasma Gun is an attempt to secure his loyalty, an example to set to the other men and insurance that should the weapon explode at least a possible threat will have been removed. 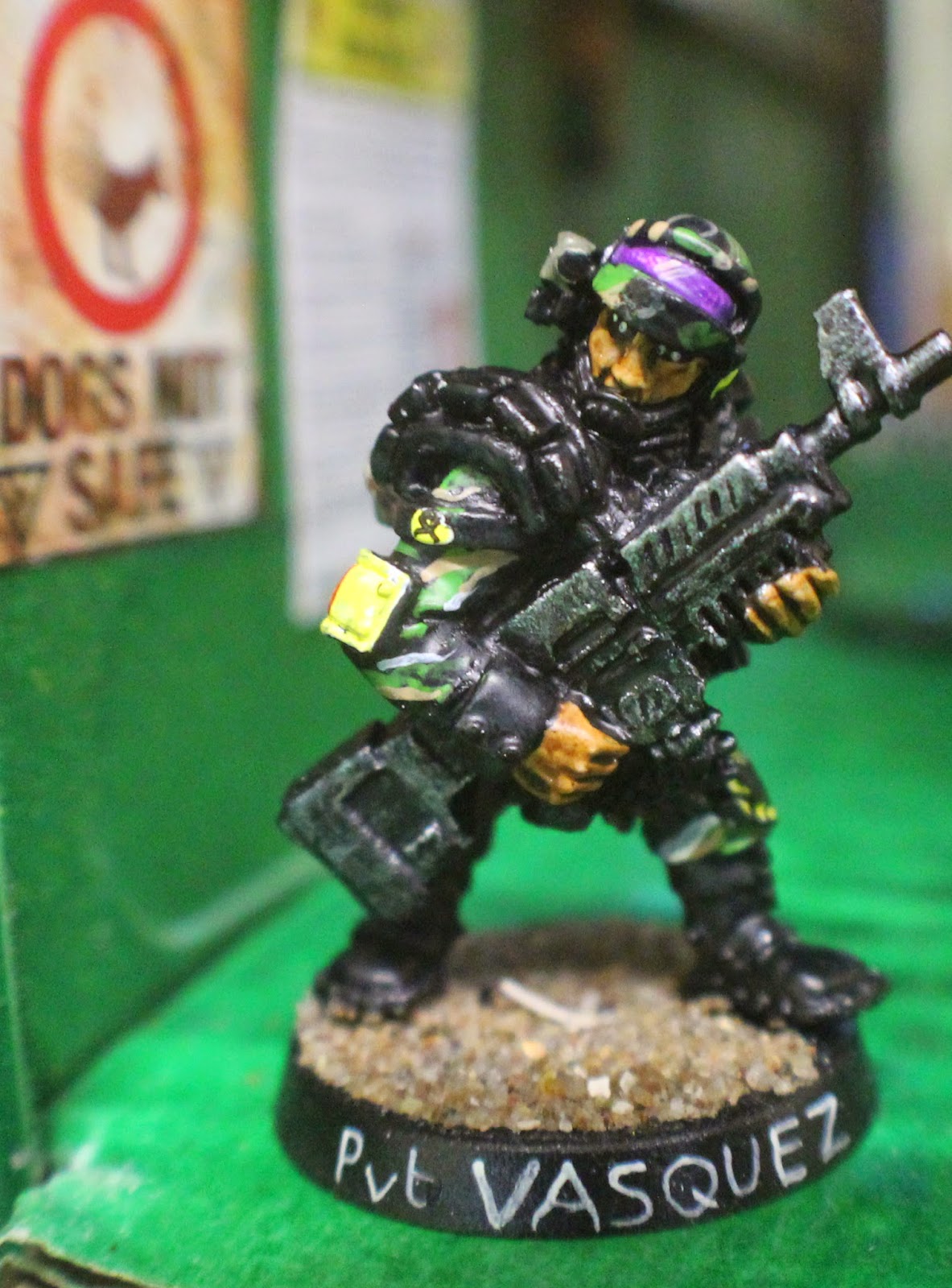 Corporal Vasquez is a loner and prone to run quickly if threatened too closely. Sergeant Apone responded to this by giving him a Hunting Rifle and telling him to go as far away as possible (but not out of range!). 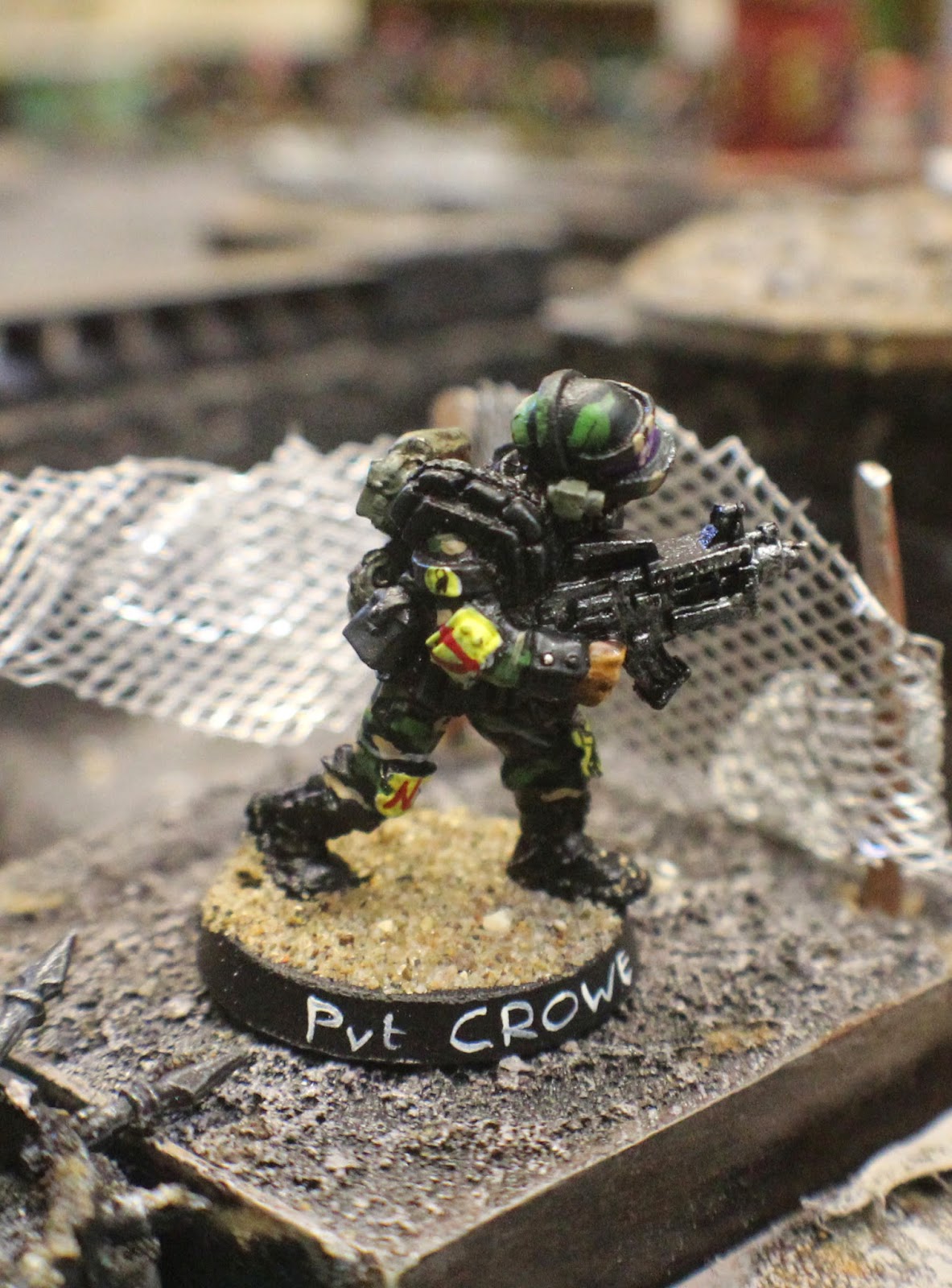 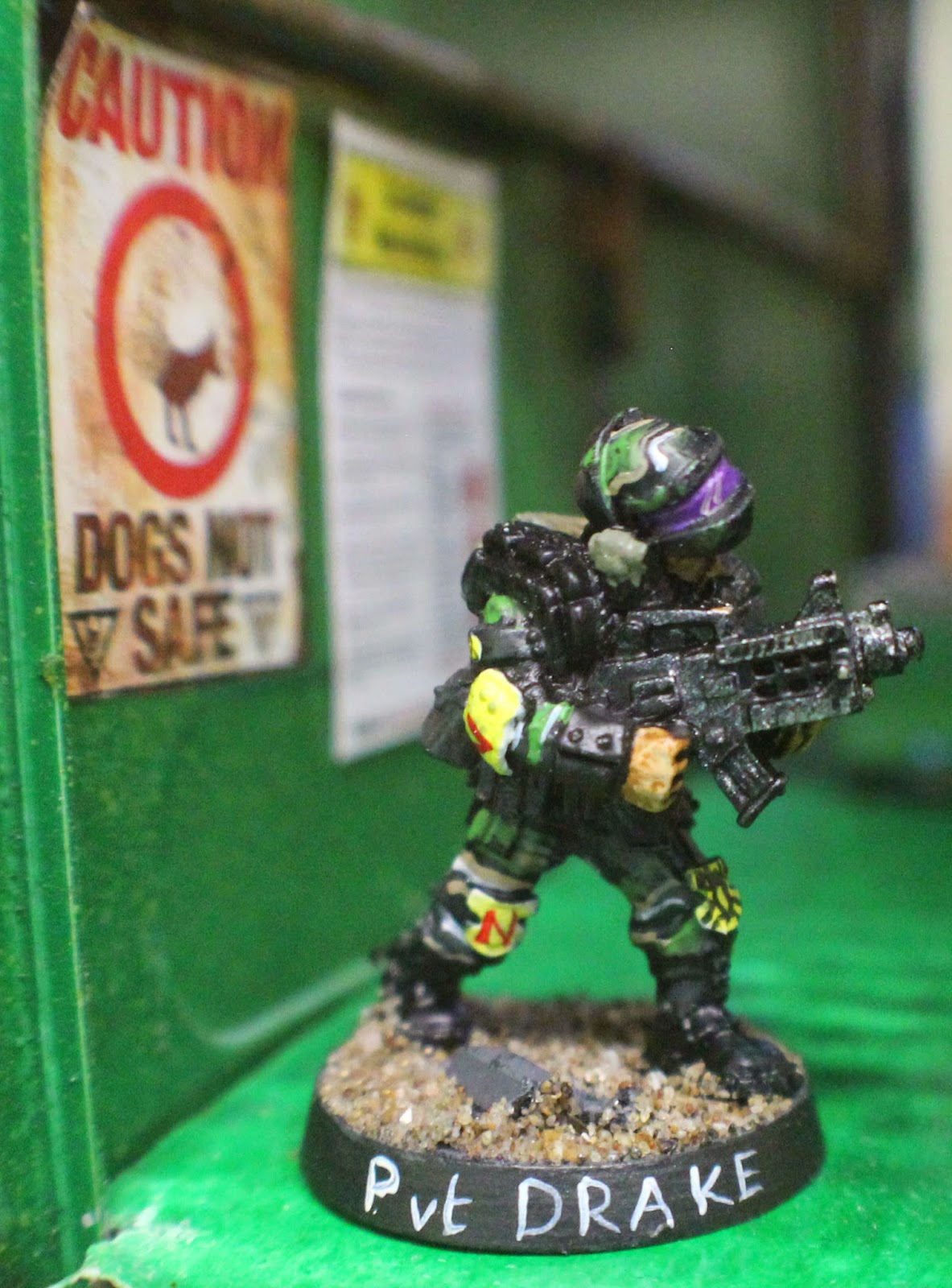 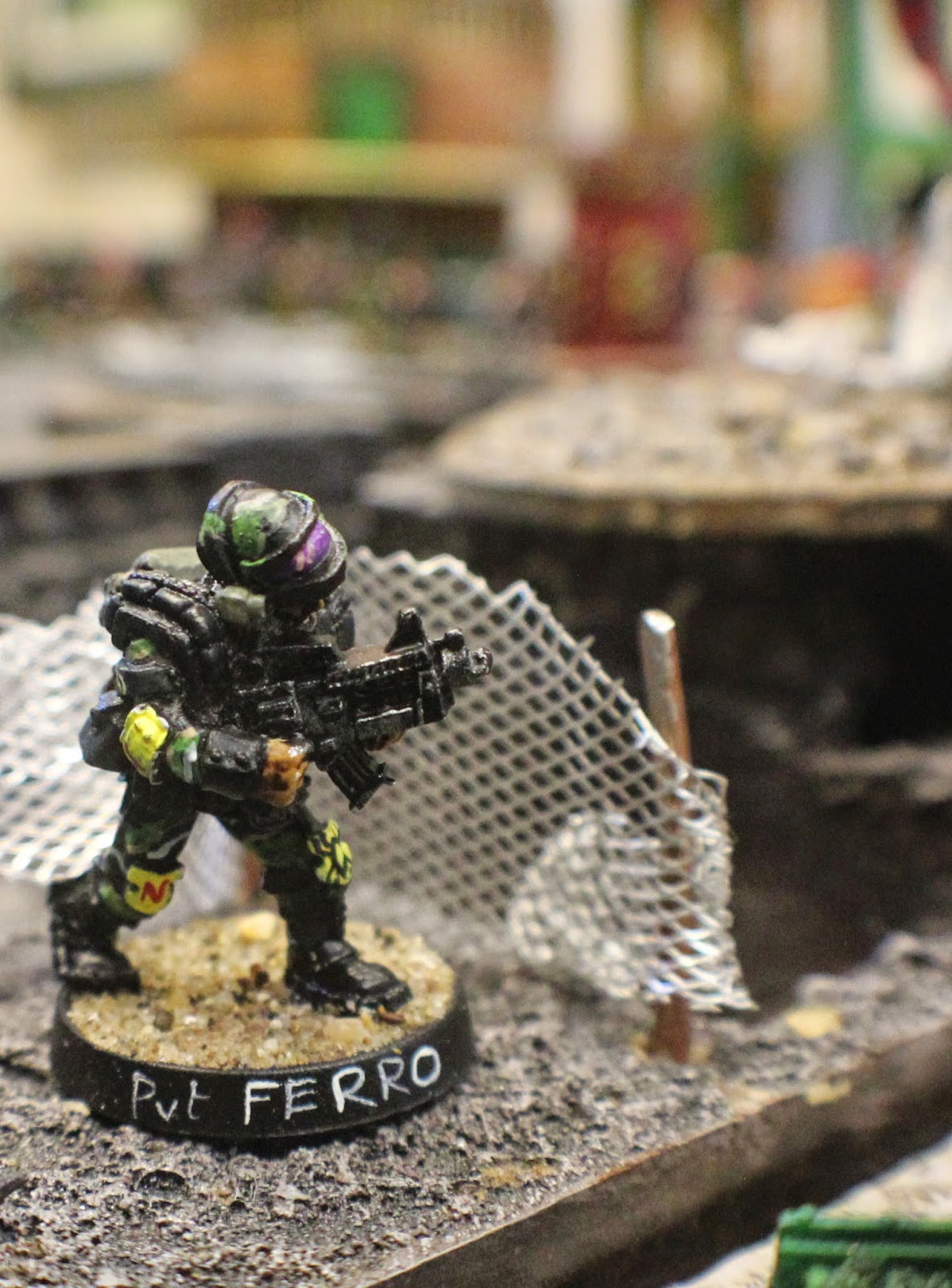 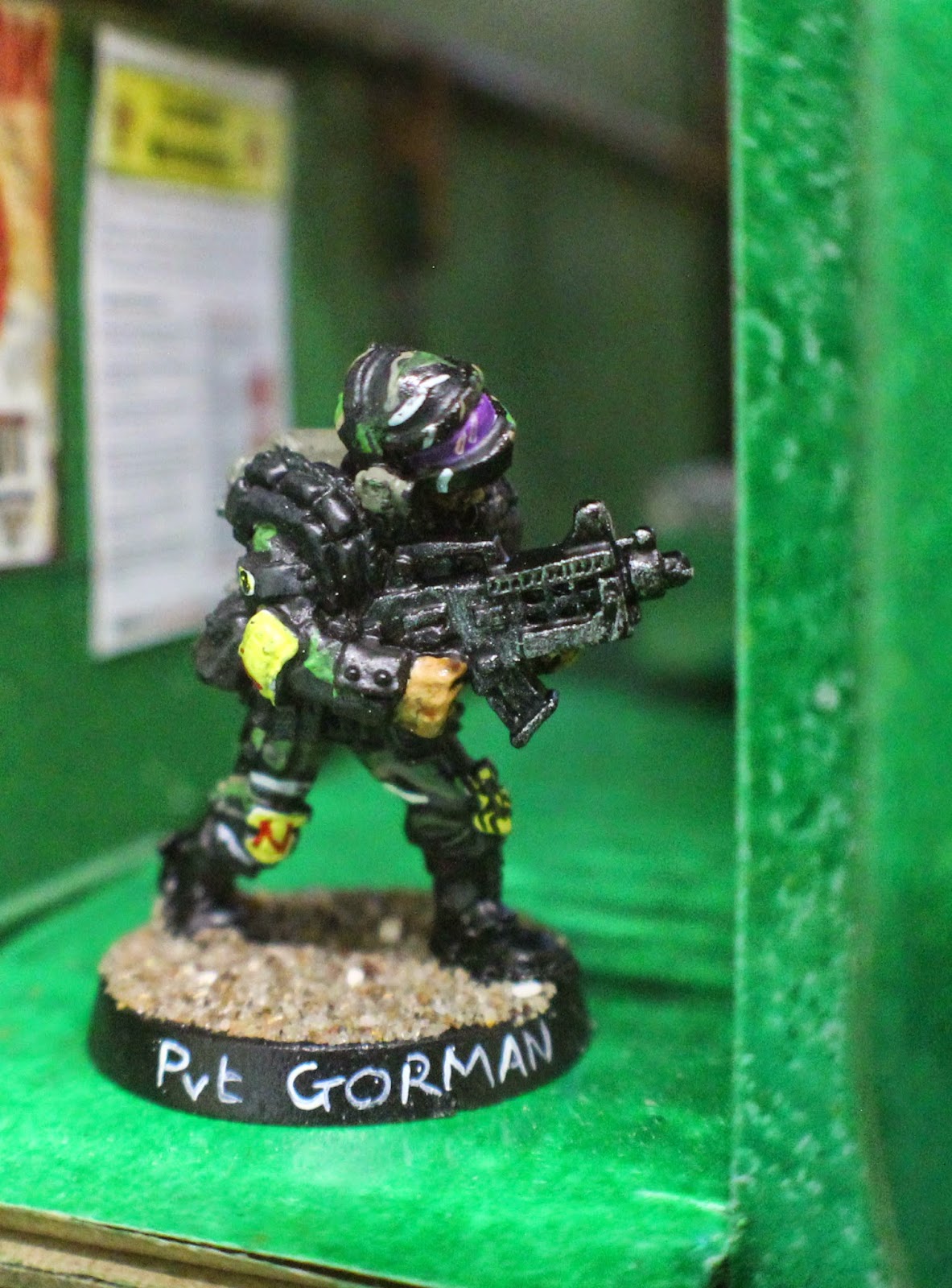 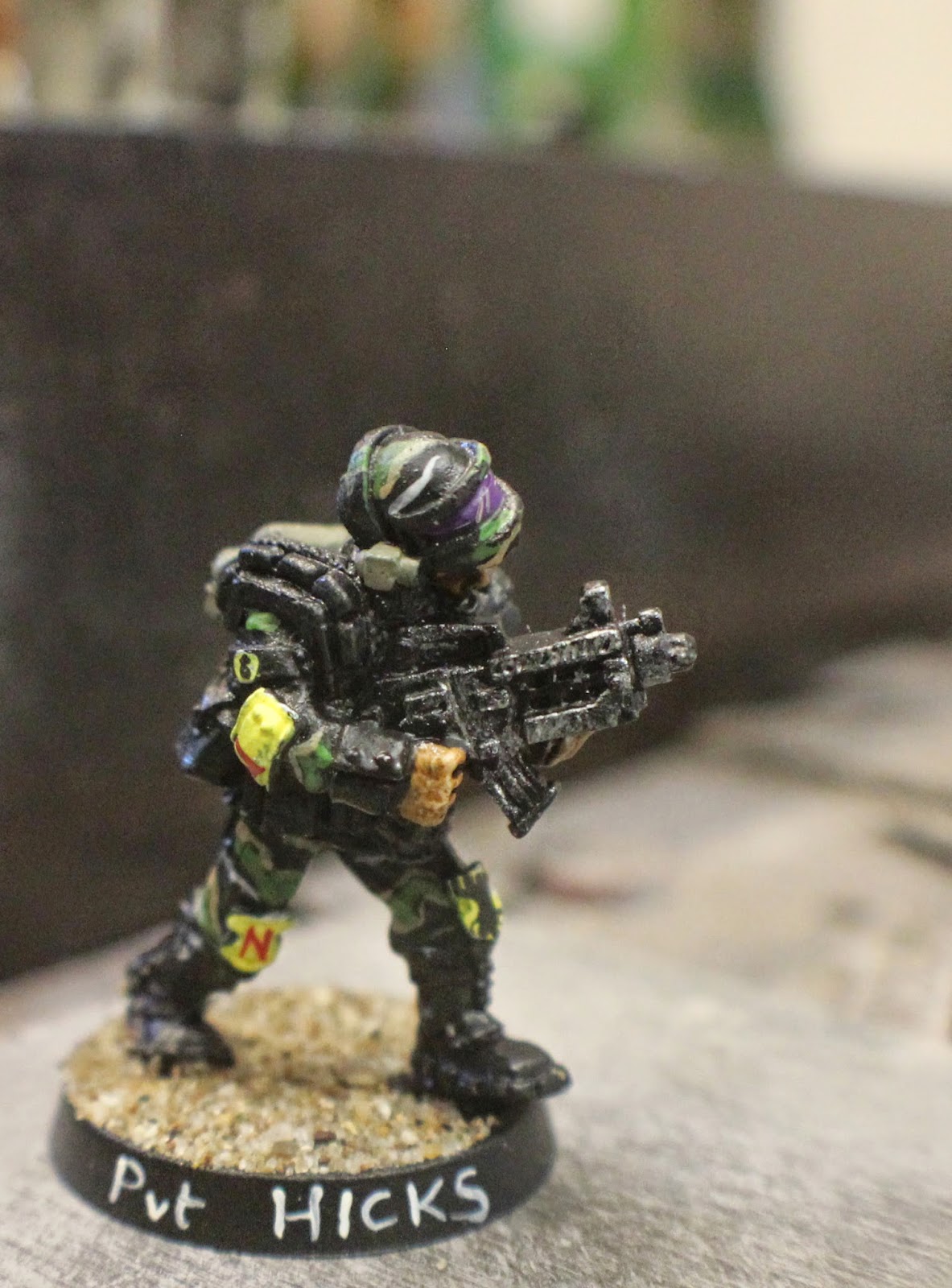 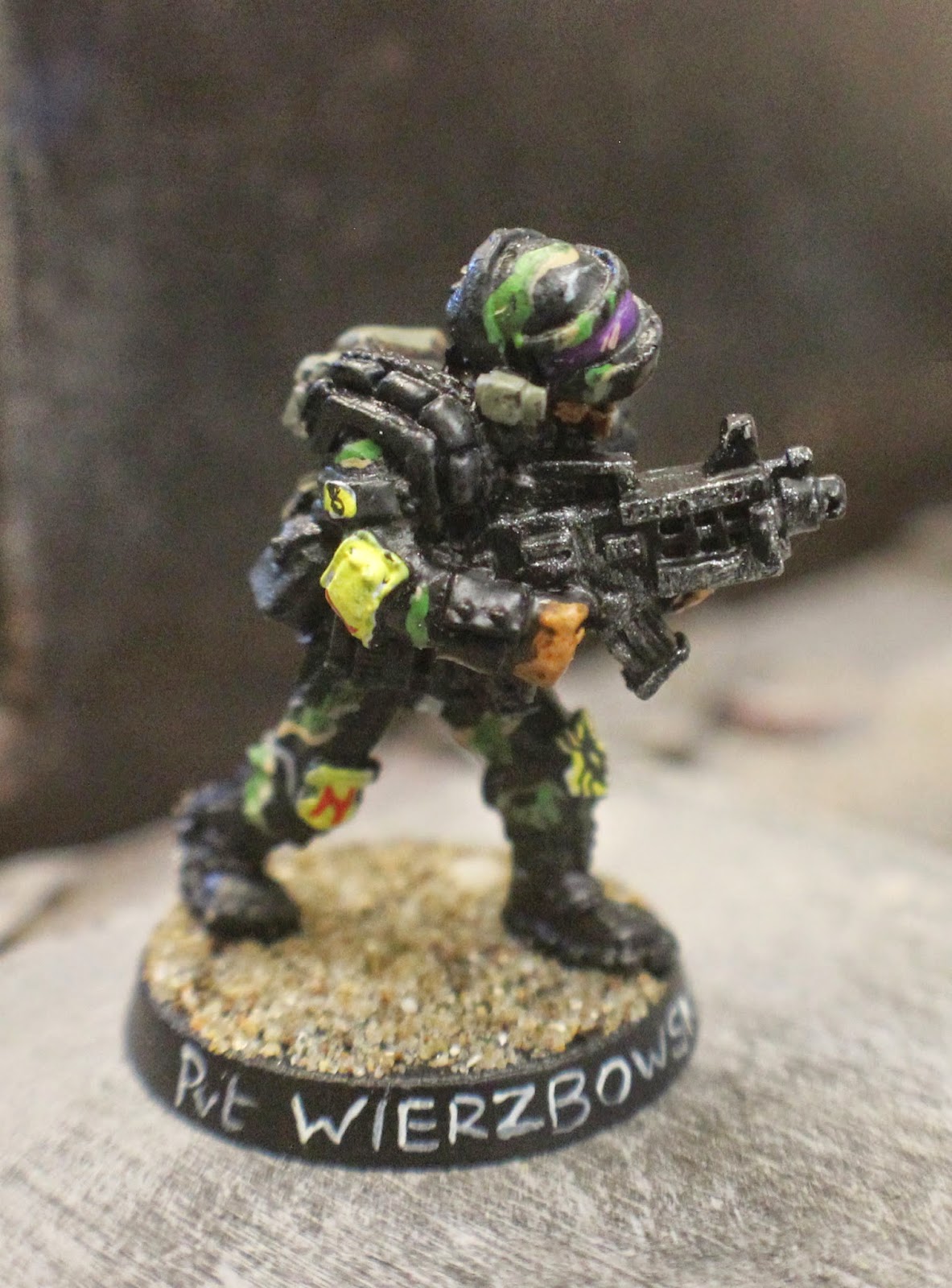 The Privates (Crowe, Drake, Ferro, Frost, Gorman, Hicks and Wierzbowski) are armed with Auto weaponry rather than the more usual Guard Lasguns. The canny quartermaster ‘suggested’ they take Autoguns so that they would better be able to maintain them with the resources available in the Underhive. Secretly he just didn’t want nice Imperial-issue Lasguns filtering down to the criminal underworld. They are a disorganised rabble with uniforms, although their short spell with the Necromundan 8th has given them a rudimentary sense of discipline not found in most gangs. They take great care of their weapons and uniforms which they regard as badges of honour. That said, they also bear a hatred for the regiment which they now regard as having abandoned them. It may not be too long before they start finding their own insignia and styles. 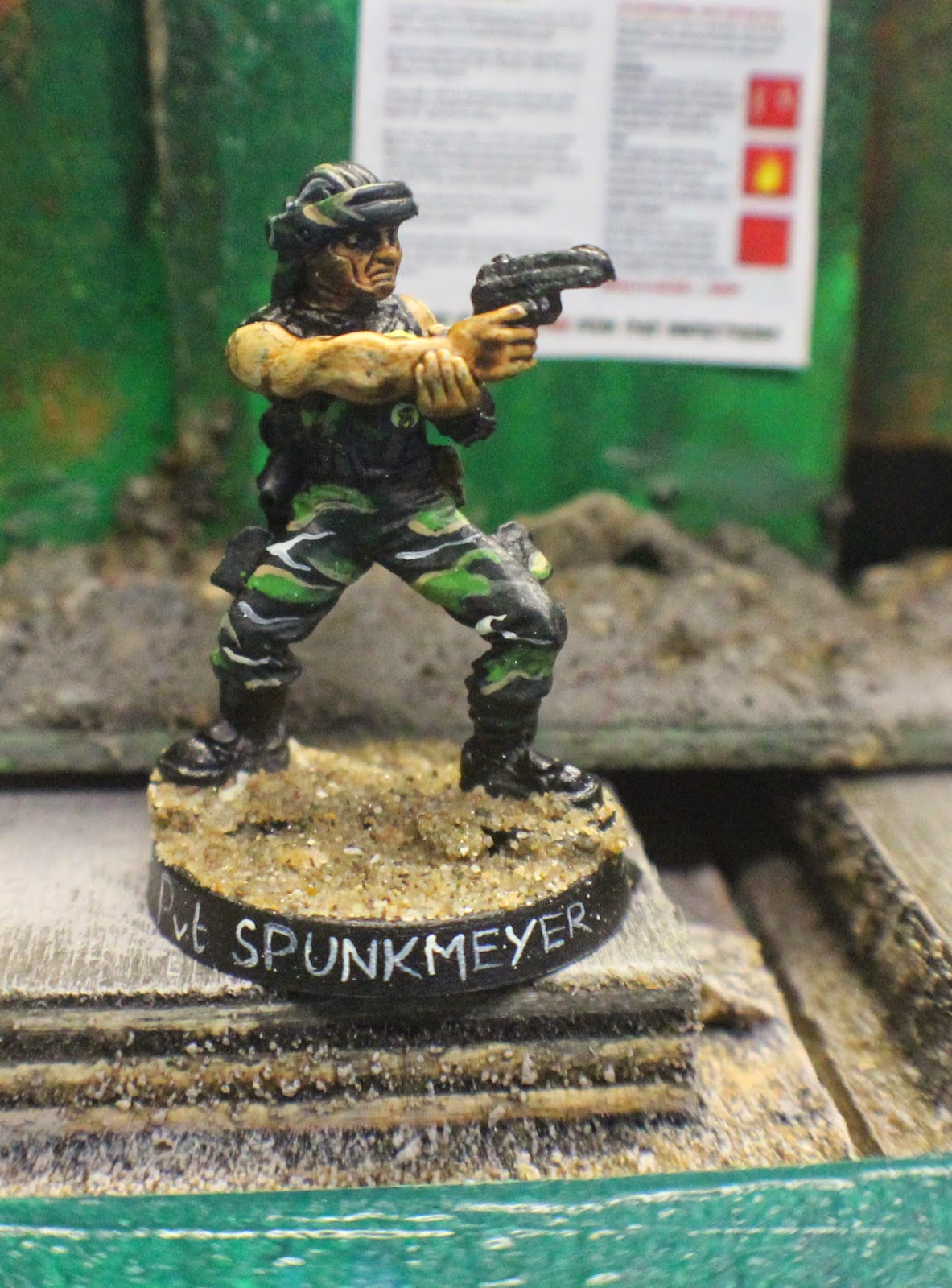 The youngest of the bunch is Private Spunkmeyer. He wasn’t among those originally trained and was initiated into the Militia by Sergeant Apone after the kid expressed an interest in Imperial Drill Routine. He was given a Stub Gun when he joined the Militia, a Stub Gun which previously belonged to Vasquez (Apone reasoned he’d be too far away to need it) and this has been a source of great hostility towards the young cadet. Vasquez takes every opportunity to shoot in Spunkmeyer’s direction, so long as he can claim he was aiming at the enemy.


Well, that’s the starting gang introduced. Hopefully there’ll be some fun developments to add in over the course of the campaign. Because I like to play for character I’m going to set some guidelines for how I’m going to play the gang. I rolled a Settlement as a territory, and hopefully this coupled with my Archeotech Horde should mean I can recruit a few new Juves every now and again. So any chance I get I am adding a basic Juve to the gang, representing some young aspirant that Apone has introduced the benefits of Imperial discipline to… or has been press-ganged regardless. I have a stock of ‘civilian with guns’ models which I’ll paint and bring into the game as various Juves come and (probably quickly!) go. I’m currently using RP Vor Union Troopers to represent most of the gang (Hudson is Steel Legion and Spunkmeyer is Scotia Grendel), but as the gang develops my plan is to swap out the uniform troops with more varied, disarrayed figures representing their descent into anti-IG anarchy.


In the games themselves, as mentioned Vasquez will shoot enemies in a way which gives him a chance of hitting Spunkmeyer whenever possible and will always set up as far away from the action as possible. Should Hudson ever top Apone’s Leadership he will challenge the Sergeant for control of the Militia.


Lastly, you might notice a theme among the gang which might give a hint of what’s in the pipes… my hope is they’ll go find out one day!