Ocean of mists, or why Fimir should stick to the swamps! BOYL 2015

Friday afternoon we just had time for a warm up game of Ahoy. I was spoilt for choice, but thought I'd let my one-eyed raiders play the first game, taking their Black longship "Black Shuck" for its first spin. Heave to the oars boys! 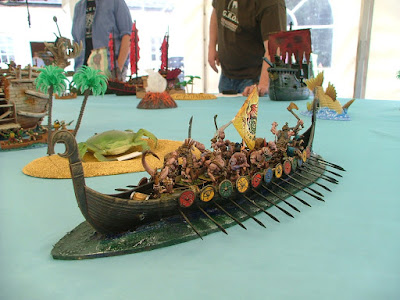 And here are their dreaded opponents, an Orc hulk, Cathayan Junk, Goblin Doom Diver Carrier.... and four Wood Elves in a canoe! Also Erny's Sea Elves with their rock-dropping eagles. 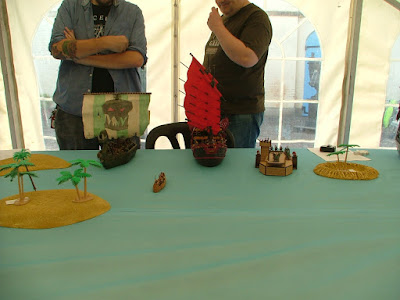 Initially there was much consulting of bits of paper... after that it was 'Ask Chris' time, the poor chap was barely able to step away from the table all weekend but GM'ed like a pro! 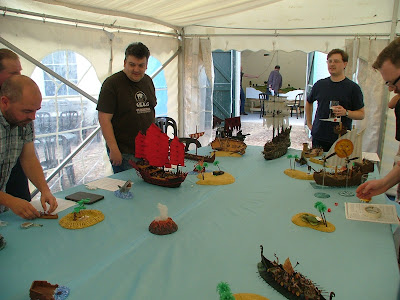 As the sea eagles (with zoologically correct markings!) bounce their rocks off the deck of the Cathayan ship a couple of the Fimm leap overboard towards a sighting of Starfall. 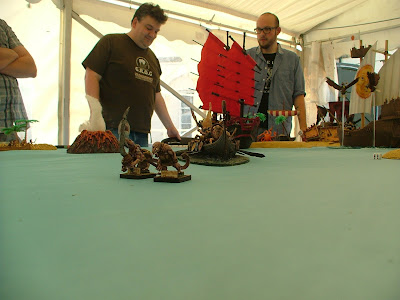 Leaving their vessel a little under-manned and dangerously close to the active volcano! 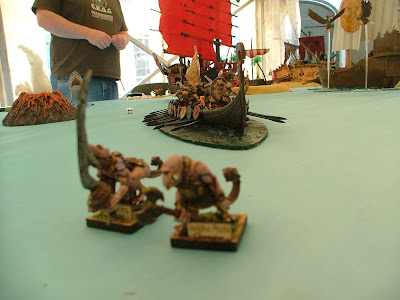 The other side of said volcano, the Wood Elves explore a desert island whilst the Orcs attack an illusory shark-man, winning themselves a necklace of shark teef. Nice.﻿ 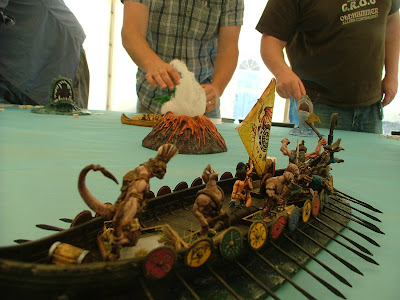 Having dealt with the imaginary monster the Orcs turn their attention upon the Fimir, sending wave after wave of rocks crashing across their decks. Unphased by the mist surrounding the longship their accuracy quickly reduced the hull to one damage point.
﻿ 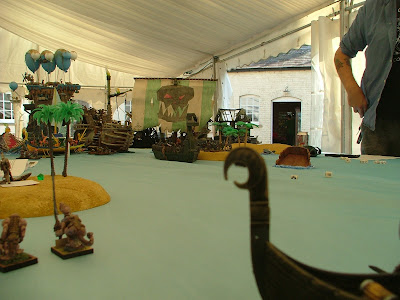 As volcano rocks flew overhead, the Fimir decided the Cathayan ship looked a bit sturdier than their own, which was shipping water badly. Unfortunately their chosen method of getting on board was to ram the Junk, inflicting damage on it which, added to Erny's brutal pummeling, reduced the Junk itself to, well, junk! 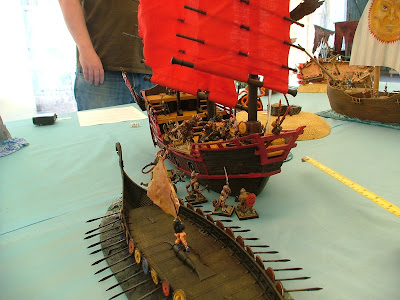 The Fimm champion and warrior made it to the island and snatched the Star Stone... 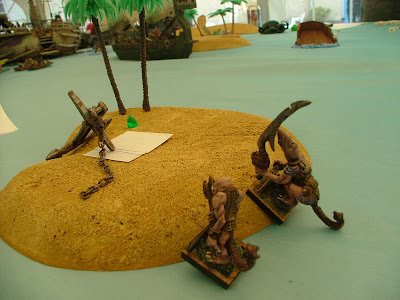 Just as one of the Orcs showed up and awakened a very real shark monster! 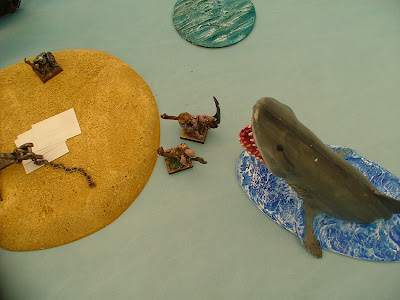 Erny's eagles turned their attention to the Orcs as the Wood Elves continued canoeing around their little island and the Fimir swarmed aboard the Junk, to find themselves face to face with a Ninja Ogre. 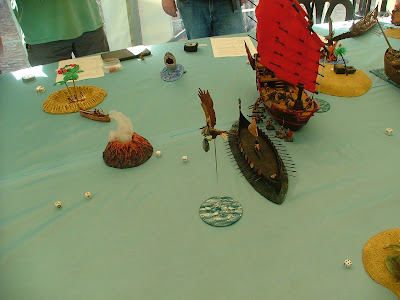 Fortunately the warlord and Fianna Fimm made short work of the Ogre and the other Fimm finished off the crew with minor casualties. 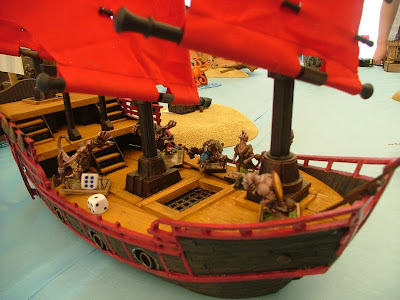 The far side of the ship not one but two monsters from the deep headed towards the Junk as it slowly beached itself upon another island. A Call of the Swordfish from the Dirach and a well-aimed axe blow from the warlord sent both monsters packing. 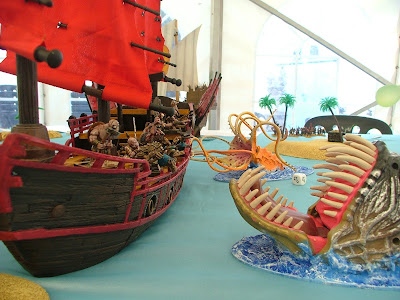 Jumping into the shallows the Fimir were confronted by a ninja, providing backup for the Cathayan wizard who was trying to bury a Star Stone. The Orcs, out of rocks for their lobber, decided to cause maximum damage with their spiky ram, impaling themselves on the side of the Junk and sticking fast. 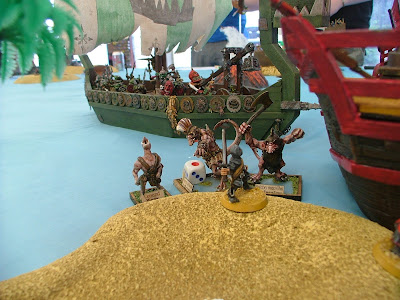 Despite wounding the warlord, the ninja was overcome by the Fimir but not before the Star Stone was safely buried in the sand. The Orcs withdrew from the Junk, but found they couldn't get any further whilst the ship was still 'parked' on the sandbank. 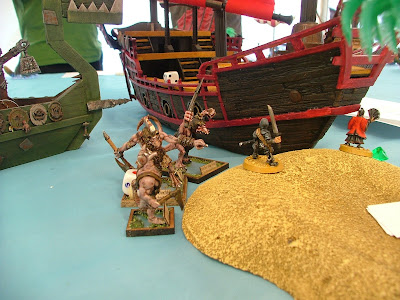 Only vaguely aware of the fate of their ship, the two Fimir on the island had been caught between a shark and a couple of Orc boyz. It cost the life of the Fimm warrior, but the champion got away from both and managed to swim with the stone towards the nearest island. 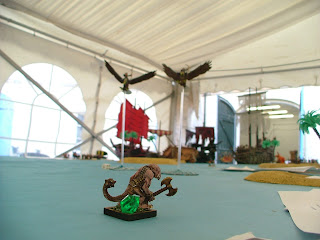 But not unopposed as Erny's eagle riders spotted him. A couple of arrows and the Fimir champion sank beneath the waves, never to emerge. The Star Stone was lost in the deep. 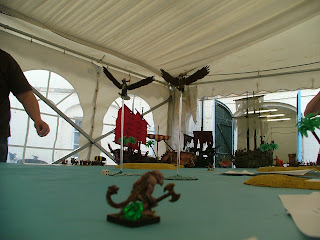 Lastly, here are some pics of the ship I didn't get to play with over the weekend, the Kata Ka'ali Slaaneshi Hellrammer. The snakemen almost didn't make it at all, being painted about 10pm the evening before. It was a shame they didn't see use, but they sat looking pretty on the table anyhow. 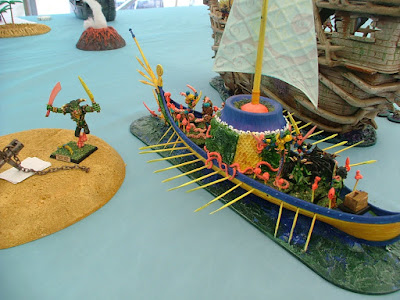 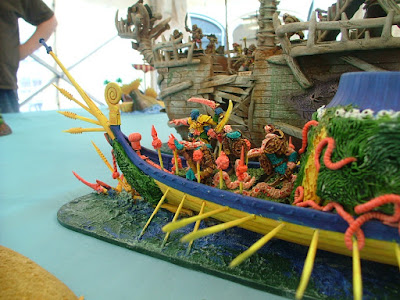 Probably just as well the Keeper of Secrets stayed safely locked away inside the champion's blade! 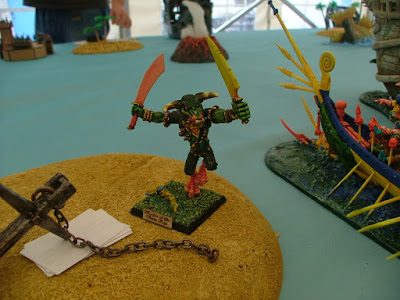 Ocean of mists, or why Fimir should stick to the swamps! BOYL 2015