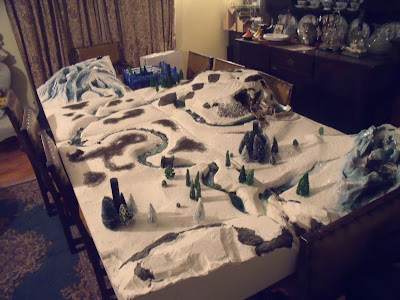 About 6 weeks after I started on the big board there's just one module left to go, the glacial lake. Of course, these modules aren't fully finished, still some way to go before I'll be happy with them. 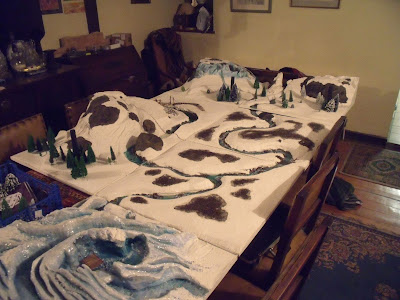 After spending an hour cutting up acrylic sheet to make snow the way I usually do for bases I came to the conclusion that it would take far too long to do enough for powder effects on all these boards. I gave in and bought some Woodland Scenics fine flake snow powder. Haven't tried it yet, but my plan is to use it to blend the bare areas with the body of the snow and to decorate the more 'trodden' areas, where the passing traffic disturbs the surface of the fallen snow. The board is set on the brink of the spring thaw, with the rivers just beginning to pick up momentum as the meltwater runs down into them, so I don't want any of the snow to look freshly fallen. It has all sat there for several months, hence the relative lack of it on the trees (although I will whiten up a few of the bare ones so there isn't quite so much contrast). I also need to do a bit more dressing on the trees as they are crappy Chinese imports (cheap) and shed a lot of their foliage in transit. Most of the work left to do, however, is detail on the mine board. 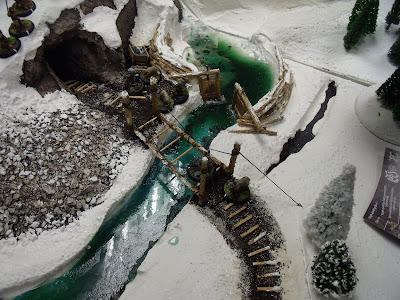 The sleepers are laid, but I need to lay the cart tracks (fine piano wire pinned in place) and finish off the cart. The black 'gulley' will be where the dwarves are storing their casks of Bugman's ale to keep cool, lots of barrels to paint for there. 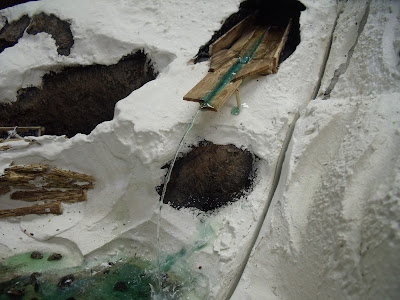 The water chute running out of the mountain (diverted undergroundstream I guess, it appears on the Lichemaster maps. Probably serves to drain the mine workings and to provide a water source outside) is mostly done. The pouring water is a fibre optic taken from one of the small Christmas trees I added to the foresty bits. By running some of the pigmented Glasscast epoxy down it I was able to get a more uneven, 'flowing' effect. It cascades into a silicone splash. The chute needs some more packed snow around it and a bit more work on the wood itself. 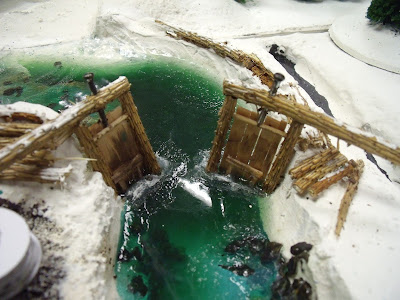 Because I wanted the pool to tie in with the other rivers on the board I decided to give it lock gates allowing the miners to control how full it gets. With the current level of meltwater flowing off the mountain the pool is quite full and they have opened the gates to prevent flooding. The gates are more Christmas tree... our real one this time! Cut off and dried out in the oven, it also provides the material for the dam walls and the bridge. I grant you these aren't the most watertight gates ever, but having cruised the Kennet and Avon canal I've seen leakier! The screws for raising the paddles need some proper handles putting on the top to disguise the heads. 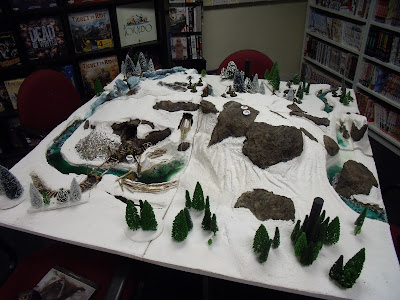 And here's a second 4x4 configuration which we used for a game of The Woods last night. The mine is home to a band of Spriggans who are trying to get back to it with their stolen sheep before daybreak. In their absence a band of opportunists are trying to make it away with as much of the Spriggans' loot as possible. The villagers who had their sheep stolen are in hot pursuit, but their way runs through a pass controlled by a gang of bandits who are planning on extracting as much tax as possible from anyone passing by. Dawn is not far away...