...well I am, I have a drawer full of the little buggers. But this is not a post about the long-awaited return to my cavern snots army. No, this is a post featuring a very particular snotling. A very rare and long hunted-for snotling!
﻿ 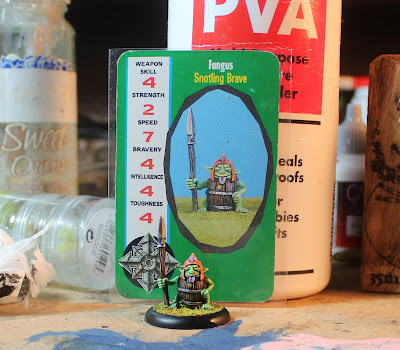 Fungus, also known as Big Snot, is one of the elusive 'doubles' from the C14 range. It took me years to find him and I've not seen one since (although I'll admit I've stopped looking). He cost me the princely sum of £30, which is far more than I would spend on almost any miniature under normal circumstances. However, projects and completeness will drive people to crazy ends (cough, Nuln Spearmean, cough). I do find it amusing that the two most expensive figures in this set (both large snotlings) are also the crappest in game terms and most diminutive in size. Fungus is a brilliant model though I can't imagine why he's as rare as he seems to be. Maybe people are just hanging on to theirs. 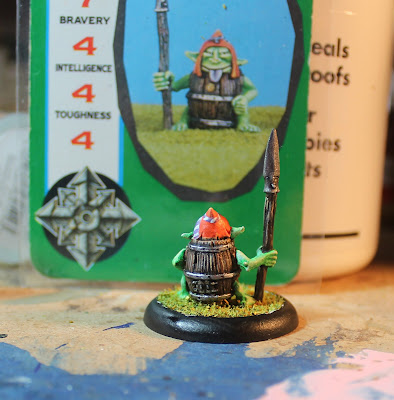 A rarely-seen rear view of the snot barrel, with a cunning hatch for times when a snot just has to make stool. He's actually pretty big for a snotling (hence Big Snot I guess) and is at least as big as some of the smaller goblin models. 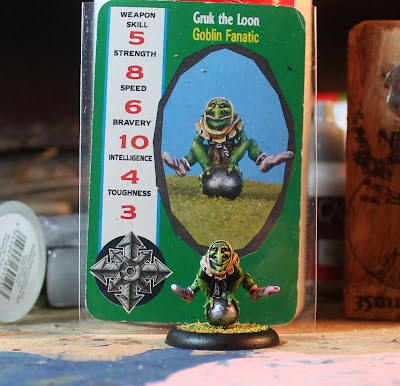 As for the fanatic bit, well, Gruk the Loon... what's not to like? These old fanatic models are some of my favourites in the whole history of Citadel orc and goblin ranges. They look appropriately crazy in a way the later night goblin fanatics just didn't. I painted a similar model several years ago when the Golden Gobbo competition was instigated but in the spirit of replicating the combat cards image I didn't spend quite as long on this guy. Still pleased with the results though, you can often tell a good miniature by how little painting it takes to make them pop I think!

I have one more figure on the bench before I grab the next selection from my rows of primed goblinoids. Since his completion will take me to 12 models ( a third of the way through the deck) I thought I'd treat myself to one of my absolute favourite cards. Which one is he? Stay tuned to find out...