In between loading the car for the West Midlands Military Show on Saturday morning and driving up on Sunday morning I managed to have a quiet afternoon's painting (listening to the wonderful Audible audiobook of Terry Pratchett's Guards Guards... which is another project altogether). So, a couple of shields notwithstanding, my completed Goblinoids collection now stands at 6 models. 29 to go!﻿ 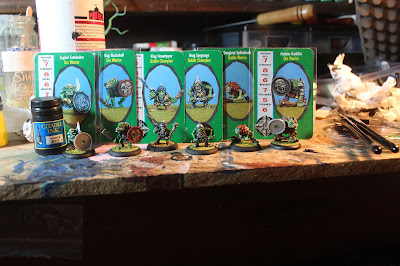 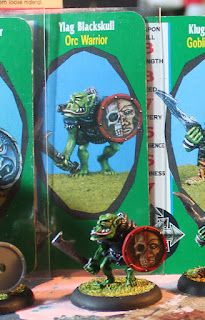 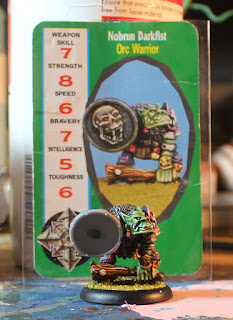 Nobrun Darkfist was already pretty much there, but he now has a shield of the correct size thanks to the generosity of Gary Lewis. I think you'll agree the extra mm or so makes all the difference! That means Ylag can have his shield back. 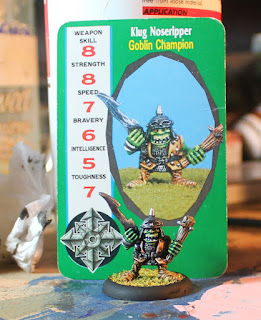 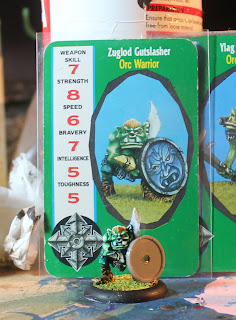 Klug was great fun to paint, the epitome of a goblin champion! I tried to bend his club to the slightly lower angle of the one in the picture, but it wouldn't go due to being surrounded by metal. I guess maybe the CC one was distorted coming out of the mould or it was a master adjusted to fit more models into the mould. In any case it's not something I'm going to worry about. Zuglod's skin gave me the most hassle out of them as it's a lot whiter than the others'. I went with a Waaagh green wash, which proved a mistake as it came out the wrong shade of green and I then had to rework with a combination of Vallejo black green ink and Foundry bright green. I think it's worked ok now though. Shield just needs filling and painting in (another donation from Gary, thank you sir!) 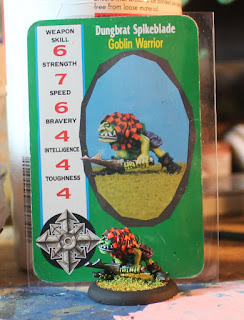 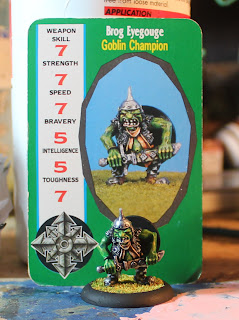 The checks on Dungbrat's hood took a lot of courage to work on, but I'm happy with how they turned out. I was trying to use folds and goblin anatomy to get the positioning of the black squares right. Brog was probably my favourite of the bunch to work on (but don't tell the boyz), nice contrasts in the leather and metal on him. Any suggestions for the design for the back of his shield? I want to do one for the sake of completing the model and it ought to be a suitable tribute to the era. 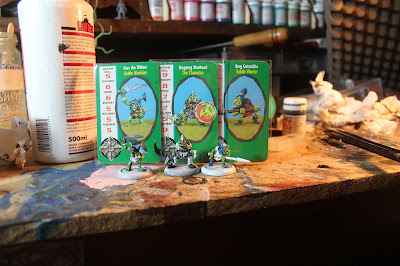 Lastly I was able to make a start on these guys on Monday night. Still early days and the skin tones are not quite right but it's often hard to judge the colours when the surrounding clothing isn't painted in so I'll base coat everything else now and adjust accordingly. Then it will only be 26 to go!