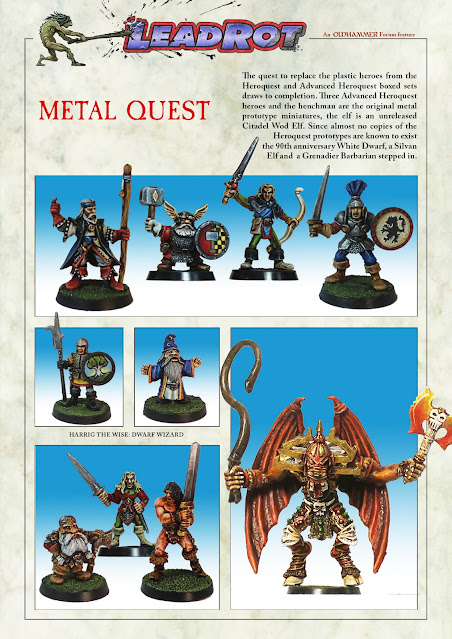 Whilst we're on the subject of Heroquest miniatures, here are the substitute heroes I've been working on, plus a gargoyle/bloodthirster. Now having mentioned how rare/unknown the original prototypes are I decided to try and find 'proxy' miniatures instead. You know, to tide me over until they inevitably appear for sale! 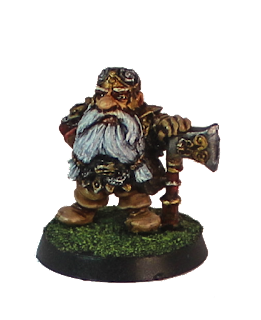 The dwarf is one of a few obviously based on the same John Sibbick art, this one is the 90th anniversary white dwarf. He's quite stocky compared to the prototype and plastic HQ dwarfs but I think of him as the same adventurer grown older, more grizzled and wiser as well as spreading a bit with his years! 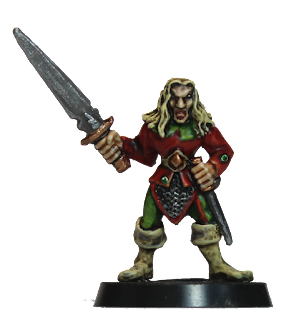 The elf is, I think, a Citadel Silvan Elf. Chosen for his similar locks, pose and armament he's rocking the stripy trousers of his dungeon equivalent. 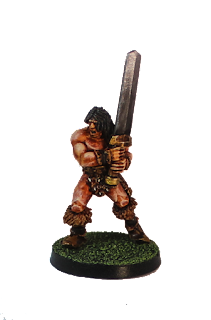 The barbarian, sorry BARBARIAN! with his Broooooaaaawwwwdswwwoooooordddd! is a Mark Copplestone Grenadier miniature with his axe swapped for a Celtos sword. Chosen, again, for similarity of pose, hairstyle and adornments. The Celtos sword is a bit chunkier but a bit shorter than the plastic miniature's and not as pointy as either of the prototype barbarians' but hey it's a broad-sword, right? 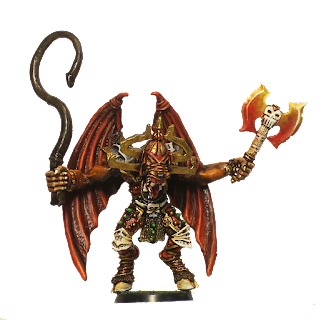 And the gargoyle is, of course, the relevant Citadel Bloodthirster. He's too tall, has too fussy details in his armour and face and frankly pales in comparison with the prototype, but failing another Marauder Bloodthirster hitting the open market he's probably as close as it's possible to get. The whip has been reposed and smoothed with some putty to better resemble the one on the prototype miniature.

Of course there's a hero missing here. The wizard seems pretty unique among fantasy miniatures in that he isn't based on Gandalf, with a long beard and floppy hat. There are a couple of preslotta 'young wizards' that look right but are too small to fit nicely with the set. My solution? A 4th/5th ed High Elf mage with sword swapped for staff and pointy ears hidden by further flowing locks. Unfortunately I have yet to acquire him, so you'll have to wait for that update. I've stuck in a dwarf wizard instead to uphold the magical arm of the party. He's probably about as competent as a junior apprentice shoved down a tunnel to face horrors beyond his wildest nightmares...