The Fimir have new (although unpainted) allies. Introducing the Bansidheia:

Among the Atrebodil tribe there are some women who volunteer themselves to the Fimir. These are treated with great respect and privilege, available only to proven Fimm, Flaiths and Flaithmor, however the cyclopsian creatures are not undemanding of the qualities of these volunteers. In order to produce a strong breed of fine warriors only the toughest women are chosen, warriors in their own right. Candidates put themselves forwards once a year at a great midwinter ceremony, they become known as the Bansidheia and leave their settlements to join the Fimir, tasked with undertaking raids on their behalf, slaughtering and enslaving villages. Those who prove themselves over the course of the year are admitted into the harem of the clan Flaithmor. Occasionally a Bansidhe proves herself such a mighty warrior she is dubbed Icchareia and given oversight of the new Bansidheia.


Women who volunteer themselves to a Fimir clan; sometimes of their free will, more often to avoid the shame of being taken captive against their will and to gain the benefits awarded to those who go freely, are asked to prove their worth in combat. This is not without risk, since those who fail are either killed or taken to join those captured in Fimir raids. As a result, the Bansidheia are a determined fighting force, often sent out as an advance party to a main Fimir raid.

Icchareia
The Icchareia is a warrior-woman of great ferocity and might who has fought through the ranks of the Bansidheia to be awarded a position equal to the clan Flaithmor. Icchareia sometimes accompany the Flaithmor onto the battlefield, or take their places if the Flaithmor are detained. They command the full respect of the Fimm.
M   WS  BS  S   T  W   I   A  Ld  Type
Icchareia                     5     5     3    3    4   2   7   3   8    Inf
Iccharan pipes: The Icchareia’s role within the courts of the Fimm nobles includes the creation of music to please their consorts. Chiefly they employ the fabled Iccharan pipes, these magical instruments are charmed to affect the mood of the listener. In battle the Iccharan pipes can be played to drive the listeners into a fighting frenzy or calm them in the heat of battle. Each turn a unit contains an Icchareia and begins its turn not in combat the unit may receive either Always Strikes First or Stubborn. If the unit enters combat the ability remains until the end of the turn and is then lost, the Icchareia is too busy to play! 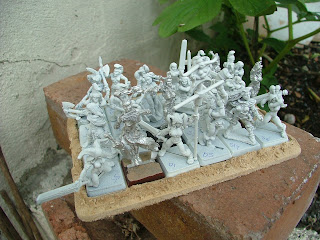 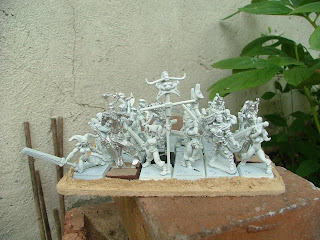 The difference in scale between the Celtos and Rackham figures: 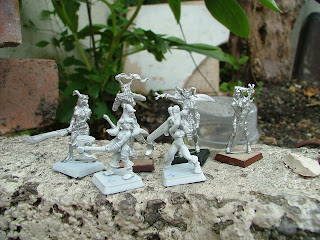 With the Reaper and other types of figures, the scale range is a bit less pronounced: 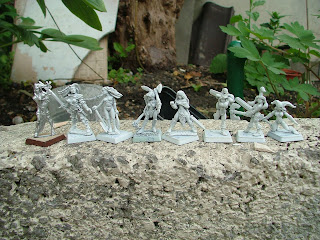 Some duplicates in the unit. The first is a huntress from Reaper. Originally bought to be chained to a monolith she has been liberated and given a big Fimmy axe to provide a bit of a difference! 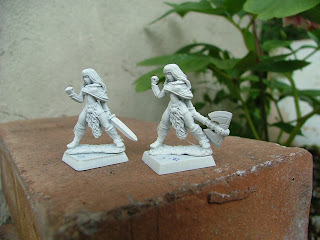 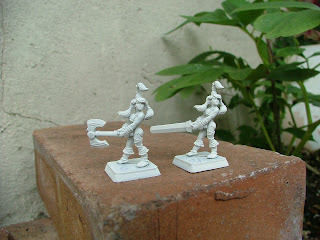 A bit of bending just to change the line of the figure: 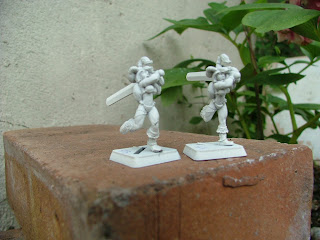 It'll be a while before the ladies join the army proper. I'm planning to paint each individually to match a painting from the Sword and Dragon Song series.