Avast behind! Faring badly on the high seas with BOYL day three

With yesterday's epic Oldhammer Ahoy battle fresh in my mind I will attempt to cobble together a nautical yarn from my photographs and memories of all the madness that happened. I don't think I've laughed so hard at the events of a single game in my life, it was sheer crazy chaos from start to finish. 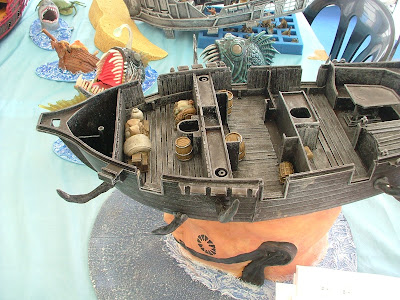 The Time Bandits giant was a highlight of the weekend- amazing right down to interior detail! So glad I got to play in the game in which, after sitting imposingly on the edge of the table for a couple of days, he finally ploughed into the waves in search of some nautical dinner! The question is... how does he move? 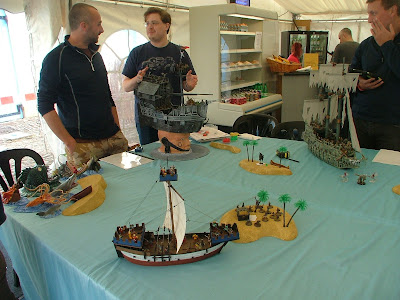 The GM Chris and Steve discuss possibilities. And agree that he will move by artillery dice, with a Misfire meaning he gets 'hat envy' and goes after the nearest ship to swap it with the one on his head. 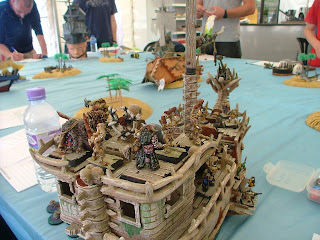 I decided to crew the Nurglithc Chaos Orc ship for this game having played with the Fimir on Friday afternoon, but my plan was to play with as many of my 5 ships as possible over the course of the game. So set sail me hearties in search of those precious Starstones! 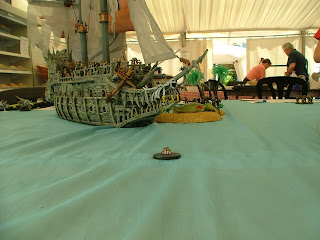 The first couple of turns, whilst drifting spectrally towards the nearest island with a stone on, the crew of the Nurglitch were busy laying their Squig Mines in the hope of thinning out the competition a bit. Some were well-placed and the Vampire's ghost ship was soon surrounded by a crowd of floating and ravenous fungus... 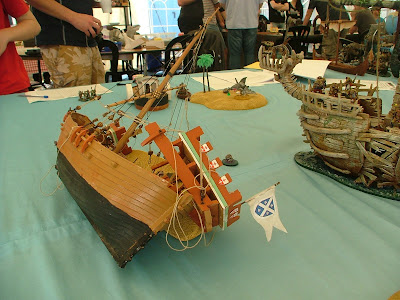 Others were not so well deployed, and ended up rather to close to the Nurglitch herself. In the distance, Sven's Voltsvagn prepared to take on the illusory man-shark... the second time this weekend the creature has been attacked and defeated whilst not actually existing. 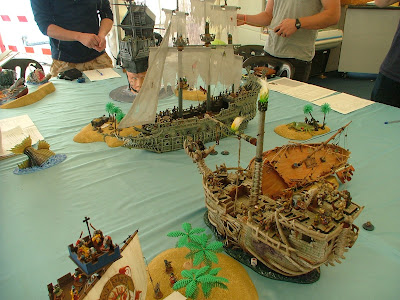 Trying to manoeuvre through the tight gap between an island and a wreck on a sandbar, the Nurglitch prepares for a run in with the ghost ship- firing muskets at Paul's samurai who were exploring the near island. Although one of the seven samurai fell to musket fire the Nipponese also took a couple of goblins off the deck with their bows. 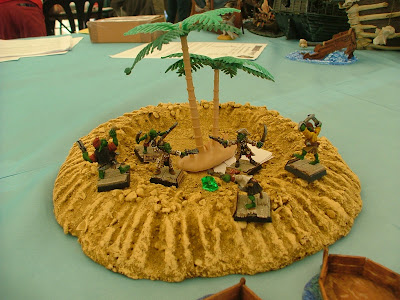 ﻿
Having set out from the Nurglitch in dinghies, the rival goblin crews of Jackie Sparrowhawk and Short johnnie Copper landed on the island and discovered some green stuff. A duel began over which crew would gain the honour of delivering the stone back to their Ogre boss. The duel was cut short by bolt pistol fire from the approaching Voltsvagn which carried an Amazon warrior with exotic Slaan weaponry. With their Quartermaster slain, Jackie's crew turned to face the oncoming assault and Johnnie's crew seized the opportunity to make off with the green stuff. 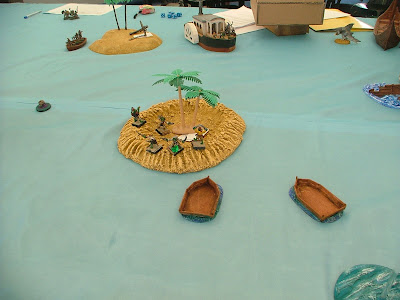 Sadly, before they could reach the dinghies a Hooligan blew up and swept the small boats out to sea. To make matters worse, the Nipponese had left some of their crew behind and sailed round for an encounter with the Magnificent Sven and his crew... leaving the goblins trapped in the middle carrying the most desirable object on the board. Things didn't look good for the goblin raiders. 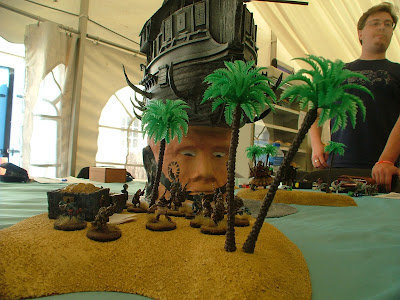 During the meanwhile... The giant had spied some tasty Sushi and was heading towards the isle of fishmen. Powerless to control their steed's urges, the crew decided to dispatch war turtle Ajax to go and search for some green stuff. 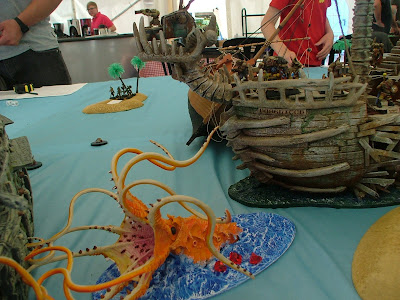 Awakened by the searching samurai, a deadly Kraken stirred from the deep and attacked the bows of the Nurglitch. Pushing his way to the front, Captain Ishmael Skullett, giant Black Orc warboss, decided to teach the insolent creature a lesson, smacking it soundly on the snout and sending it fleeing, staright into the side of the ghost ship. 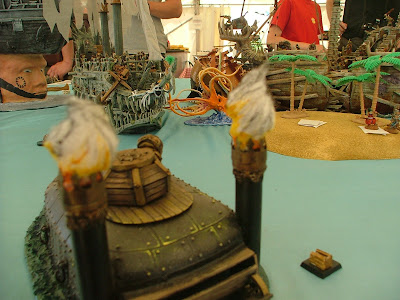 Drawn by the rumour of monsters, the Chaos Dwarfs arrived in their Cutting Snark- searching for trophies to carry back to hang above their forges. With one shot from the turret-mounted mortar they deflated the giant squid. Hauling it behind them they went looking for other monsters to slay. 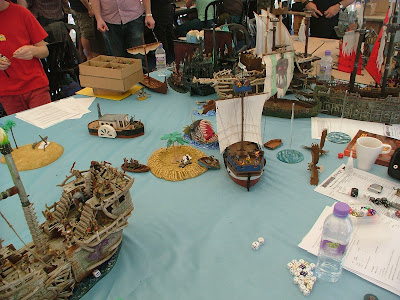 The crew of the Voltsvagn reached the goblins on the island and slaughtered Jackie's crew whilst Johnnie's crew reached one of the dinghies and tried to escape. But it was too late, the Nipponese were upon them. The scuffle had awoken a sea monster though, which initially went for the paddle boat. A quick blast of bolter fire sent it the other way, after the supposedly more vulnerable Nipponese ship. 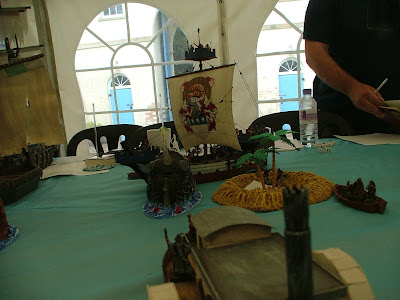 But the monster hadn't taken into account the subtle martial arts ways of the Nipponese! A ninja leapt from the deck, straight into the open maw of the fish, hoping to tear it apart from the inside. The monster took off, locked in internal combat with a deadly kamikaze assassin. 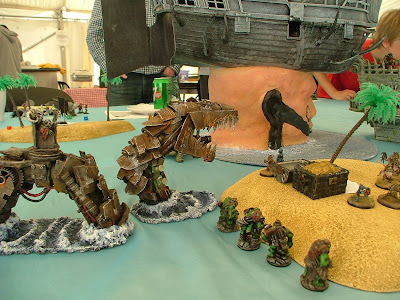 On the other side of the board another monster had appeared, Curtis' Ramshackle Iron Sea Serpent disgorged crew to fall upon the hapless natives. The giant's appetite had momentarily taken a back seat as it spied something shiny across the table. There, wrecked upon a sand bar, was a very fine hat indeed! With the goblin crew powerless to stop him, the envious giant moved towards his new headgear. 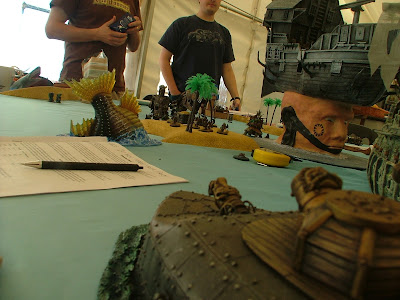 The Chaos Dwarfs had spied the Ramshackle monster and drove full throttle towards the waiting monster. Turret and steam cannon were both loaded and primed for the coming assault. 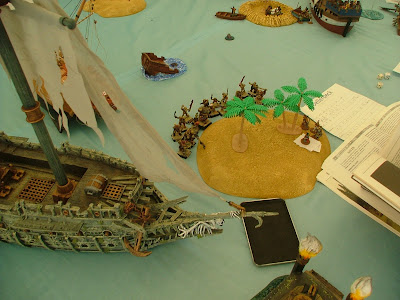 A well-placed stone thrower hit from the ghost ship (now shipping water badly and in danger of going down) smashed into the stern of the Nurglitch, killing the Mighty Tim straight off. Without their leader the three remaining Orc Shamen could not keep the decaying hulk from falling apart and the ship sank in an instant, leaving the Orcs treading water. Unable to venture onto land because of their Nurglitch Curse it looked like they would be shark bait, and the discomfort the shark would then suffer from ingesting Nurgle's Rot would be small comfort for the digesting greenskins! 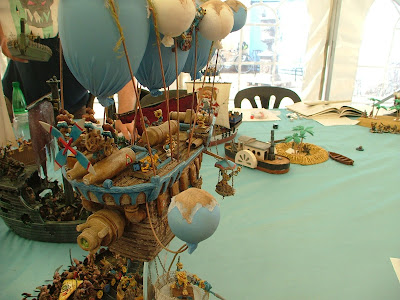 But wait! Up in the skies! A rescue ship coming to fish the stranded Orcs from the water. The Klindenbourg with her Goblink crew floated into view and made for the centre of the table. 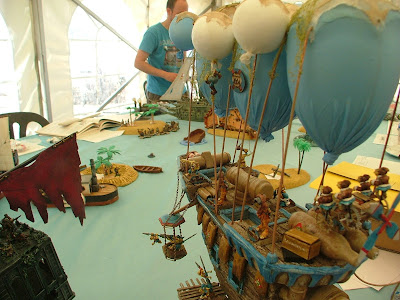 Spotting the ongoing fight between the samurai and the crew of the Voltsvagn, a couple of the Goblink Schutzen decided to take the opportunity to steal the Starstone from under their noses and fired their Snotling grappling hooks into the palm trees, sliding down the ziplines onto the island. 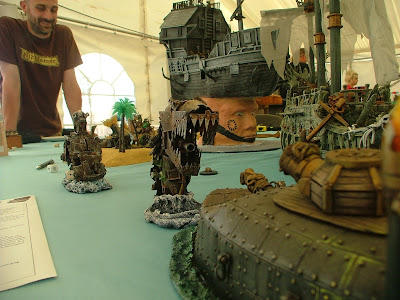 The Ramshackle monster and Chaos Dwarfs were locked in iron-versus-iron combat as the giant made slow but steady progress towards the sandbar. The Cutting Snark's steam cannon and mortar glanced off the metal plating of the mechanical monster whilst its own cannon had got a bit dampened by the sea water and kept misfiring. But the beast was getting ever nearer... 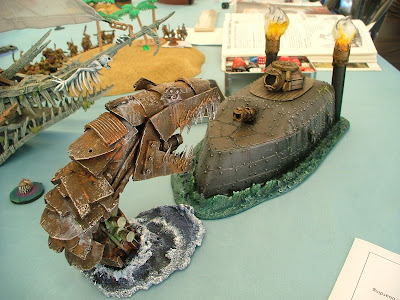 At last it was within chomping distance and the Chaos Dwarf submersible found its hull being perforated by ferrous teeth. Fortunately the plating held firm and the mortar continued to bombard the head of the beast as it gnashed away. 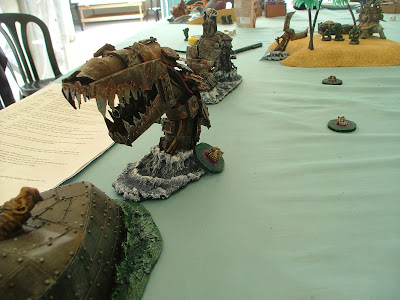 One of the drifting Squig mines bumped against the side of the iron serpent, blasting a hole in its neck. With a steam-powered howl it threw back its head and dived beneath the waves. The Chaos Dwarfs closed their hatches and dove off in hot pursuit into the watery depths. Meanwhile the ghost ship had begun its final descent to a second watery grave. A handful of skeletons made a getaway in a deserted Wood Elf canoe that had washed up on one of the islands whilst more of the Undead clambered onto the decks of the Time Bandits' ship, making a pact with the sea goblins. 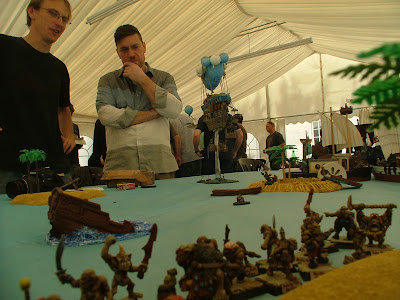 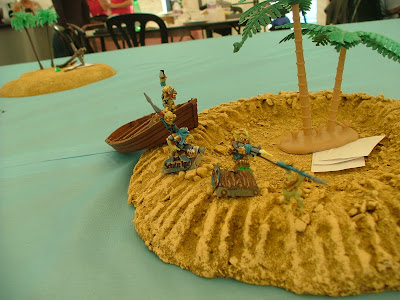 Zee Klindenbourg kept up its slow drift towards the stranded greenskins. A few more Goblink Shutzen slid down onto the nearby islands to make room for the shipwrecked Orcs. the couple which had slid into the centre of the fierce battle between the Amazonian/Norse contingent and the Nipponese snatched away the starstone, commandeered a dinghy and paddled off to bury their loot.
﻿ 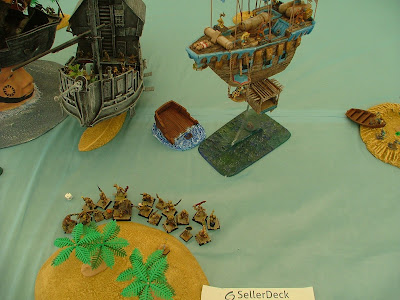 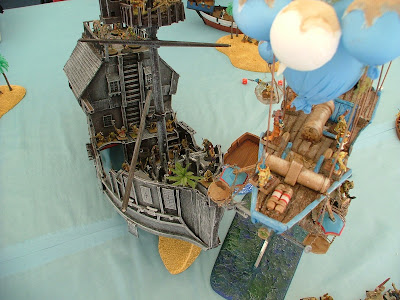 The giant finally reached the sandbar and, despite cries of dismay from the upper decks, swapped his headgear for the shiny wreck that lay there. As the Goblink airship approached on their rescue mission the stranded Time Bandits manned their organ gun and let rip at the dirigible's highly-flammable methane balloons. The Goblink Droppers retaliated by dumping buckets of foul Goblink sewage onto the heads of the unfortunate crew below. The victims mostly being skeletons the effect of the smell was minimised by tossing the bones overboard. 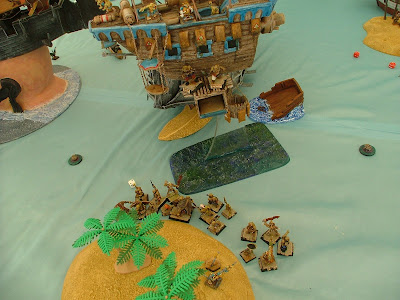 Nevertheless, as the giant headed away with its new hat, Zee Klindenbourg began airlifting the Orc survivors to safety. 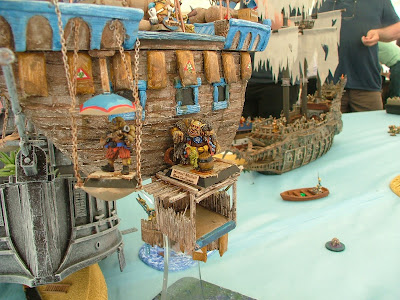 With Captain Ishmael tucked away on one of the lower Schutzen nests the airship was getting low and being blown dangerously close to the rigging of the stranded Time Bandits. As the Goblinks in their dinghy rowed furiously towards an island to bury their treasure a sinister ship hove into view, another ghost ship! To the melodious strains of Wurlitzer music the Vampire craft bore down upon the hapless Goblinks as the skeleton crew skewered two of them with arrows. 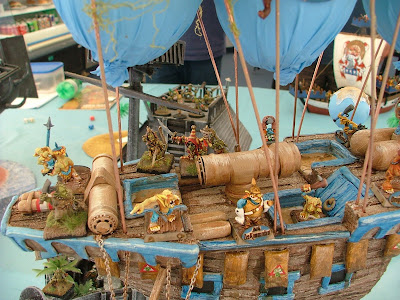 Seeing their opportunity to escape the sandbar, the Time Bandits used the rigging to board Zee Klindenbourg, Boyldrick slaying Zee Kommandant (proving zere are some tinks zat a Goblink officer cannot do!) and pitching the remaining crew into the sea. Had they noticed the giant Black Orc hanging below? Only time would tell... 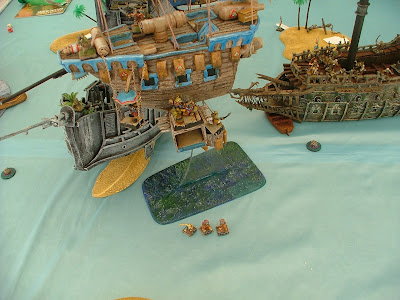 ﻿
The same gust which had blown Zee Klindenbourg into the rigging of the Time Bandit ship (Steve told me the name, but I can't remember right now- it was genius though!) swept the Goblink dinghy under the bow of the ghost ship where it was splintered to matchwood. Diving into the ocean the surviving Goblink managed to reach the island and quickly buried his starfall before the Undead hordes could descend upon him.

Elsewhere on the board the Giant was embroiled in a battle with a giant shark (nom nom seafood!) and then spotted an even nicer hat in the form of Chris' Doom Diver carrier, but of those events this story does not tell. For with the announcement of the painting competition results the game drew to a close and the sun set upon Oldhammer Ahoy 2015.

Thanks to Chris and Harry for organising this... especially to Chris who adapted all the rules and GM'd the battle all weekend like an absolute trooper! It was loads of fun and well worth spending the wee small hours of the night building ships for. As with everything that happened over the weekend everyone was good-humoured and the narratives that developed were spectacular in randomness, comedy and without a sign of competitiveness. Never has it been so much fun to 'lose' a battle! Over all the weekend I think there was only one loser, a plaintive bag of plastic toys left by itself on the trade table... but then, we don't talk about that! ;) 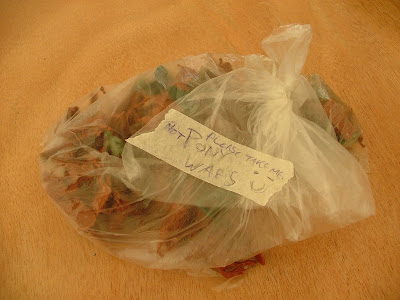 Avast behind! Faring badly on the high seas with BOYL day three