It's nearly the end of the year, as I'm sure you've noticed, so I thought this would be a good opportunity to have a look at what happened at Oakbound in 2015 and ask some important questions about what I want to happen next year. For the latter part I'd like to ask your help, but more about that later down the page.

The beginning part of 2015 saw a couple of important events, one for Oakbound and the other for me. First we shipped (after a lot of unavoidable hassle which I hope not to experience again!) The Woods Kickstarter miniatures. Yes, it really did take five months to mould, cast and ship and since that period involved my having to make hasty arrangements to get bits resculpted and cast by three different companies in order to not keep backers waiting any longer than necessary the final sending of those boxes was a great relief. If you've noticed that there are still only a tiny fraction of the figures we produced on the webstore that's because of the rate at which my painting was able to go before getting caught in the next thing... 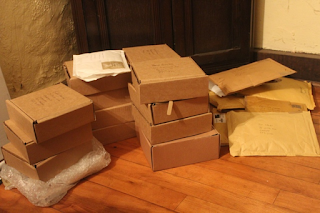 I got married! Not of enormous significance to Oakbound maybe (although my wife Solly has generously donated space in her studio and a substantial amount of her excellent artwork to the company) but certainly a momentous occasion for myself and one that kept me away from big developments with Oakbound for a few months. 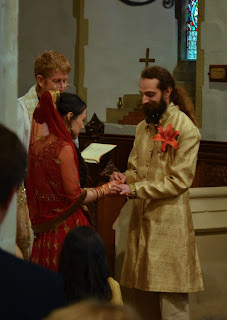 The Summer and Autumn were more productive on the Oakbound front with the Legends of British Steampunk Kickstarter gearing up and a couple of trade shows where we sold the last copies of our first Tripods! board game print run and a significant number of The Woods miniatures. Completing the Legends Kickstarter at 500% was a very positive way to end the year and I'm now leaving the casting in the capable hands of Kieven at Lancer Miniatures whilst I go off on Honeymoon. 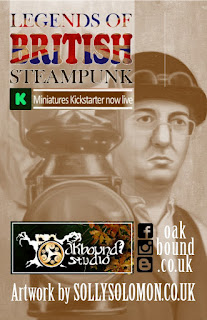 There have been two very key developments from the previous year. The first is that Tripods! is currently earmarked for an international release and a significant amount of work has been undertaken to make the system more strategic for the adult board game market. The developments need some serious playtesting in the spring but we're hopeful it will be ready for print in the next 6 months. 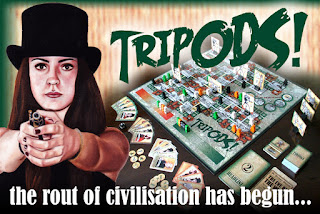 The second development is with a game system called 'Factious Waste' which a number of followers of this blog and the Oldhammer Forum have been testing during 2015. Talking to visitors at the trade shows one thing that is apparent is that selling miniatures without a game system supporting them can be confusing for some people. A slight frustration of 2015 has been having a huge amount of background for The Woods produced for a couple of aborted attempts to work with people producing roleplay systems and which has yet to see publication. That, and wanting to release Factious Waste but knowing that the miniature and background development is a good year or so away from being ready, has prompted me to make a significant step which I believe is going to make some future developments much easier. I have stripped the rules-set (all 4 pages of it!) from Factious Waste and left it as a background-free system I'm calling Systemmech. Legends Kickstarter backers have had a chance to download and try out Systemmech with a Legends plug-in which gives a good idea of where I'm going with this.

So, my hope for the next year is to finish testing and release Systemmech, a cards-free, dice-free tabletop roleplay system consisting of a short, free, downloadable rulebook. THEN to release a series of printed supplements with equipment lists, skills trees, scenario ideas, narratives, character classes and, most importantly, a ton of background for each of the miniatures ranges to allow their use not only with Systemmech but also with any wargame or roleplay system players wish to plug the setting into.

All going well with the casting process, the success of the Legends Kickstarter  puts Oakbound at a position where I hoped we'd be this time last year, with a comparatively small but usable pot of money to invest in developing a setting.

NOW, this is where I need your help.
With the two Kickstarters we've run so far we've got a small but strong core of supporters. Kickstarter is something of an odd beast, I'm very keen on it but I know some people, especially with established businesses, aren't since it has taken a lot of trade away from the small companies who aren't using the platform. Meanwhile, companies like Mantic, with a customer base and reputation large enough not to need Kickstarter any more, are still using the platform for the coverage it provides for them. My own take on Kickstarter is that it is a wonderful opportunity for someone like myself with ideas I'd like to make flesh but no supply of capital to enable that to happen without the support of other people who think those ideas are worth pursuing. BUT, at the point at which the company has enough capital to go it without crowd-funding platforms I think it SHOULD, to allow others to benefit from Kickstarter without being overshadowed by established giants, and to grow the business practice of the individuals running company.

For this reason I would like Oakbound to not have to resort to Kickstarter in 2016 (or afterwards) As I say, we have a small but usable pot of money to invest in the development of our settings and systems now and I believe we should use it for that rather than banking it and then asking backers for more money through crowd funding. That doesn't mean necessarily we won't need to do pre-orders, but it represents a move away from the startup stage and I'm very excited about it.

From this point it would be very easy to crash back to the point of not having any funds rather than building on the funds we have available to invest in the necessary and hefty expenses such as getting artwork commissioned, printing books, paying painters and sculptors to work on the miniatures I find myself not having time to work on and so forth. WHATEVER WE DO WITH THE FUNDS WE HAVE NOW HAS TO REALLY COUNT! So I'd like to ask a few questions of this blog's readers if I may. It won't take long, but it really is important to me as the future of Oakbound Studio could really hang on this one decision.

The decision is... which setting do we go for as a starter? You can find a description of the settings and a few related questions
courtesy of Survey Monkey (here). You don't need to sign up or provide personal details or anything. I'd be very interested to see what you think, grateful for your participation and would love further feedback and ideas. Please do feel free to post on the Facebook Page.

Thank you again, and Happy Christmas!