I have been mostly absent from the worlds of blogging and Oldhammer since, I am told, my latest project is "not really Oldhammer". Fair enough.

The miniatures take neither of the above setting as their influence.

Never mind, I'm doing them because I want to (and that to me is very Oldhammer) so here they are, the Legends of British Steampunk: 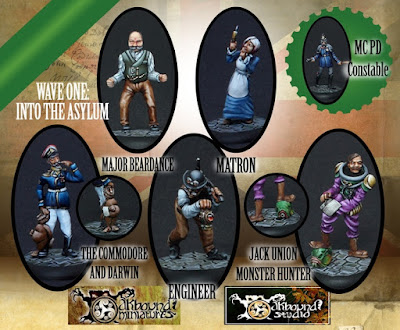 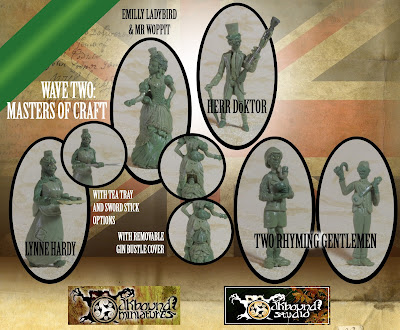 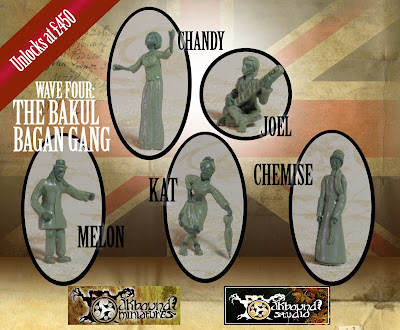 The idea is to produce miniatures suitable for some of the current skirmish-sized systems such as Malifaux, Infamy, Wild West Exodus, Dystopian Legions and Wolsung which use 32-35mm miniatures and have Steampunky themes. The thing about Steampunk games designed by people who like the aesthetic but haven't been immersed in the Steampunk scene is that they can be quite generic and lacking in character or creativity, two things central to the subculture. To challenge this and as a way of showing recognition to some individuals who have shaped the way the Steampunk scene in the UK has developed over the last ten years I am sculpting miniature versions of 'actual' personas for use on the tabletop.

There are another two sets currently being sculpted, the fabulous Men That Will Not Be Blamed For Nothing and a selection of celebrated personages from across the UK.

The range is on Kickstarter at the moment. Don't pay any attention to the 'unlocks at £450' shown above, we were funded in 5 hours and all stretch goals were met in under a day. We're now working towards three new stretch goals, the first of which was unlocked on Monday, releasing the Steam Mascots to the world.

The masters from Wave 1 were painted by the excellent Sigur from Battle Brush Studios. In under a week would you believe?!

So if the neo-Victorian vibe is your thing, or you know people who play any of the games above, please do share the project and pay a visit to The KICKSTARTER page. And if you do have any concerns about scale and whether these guys will fit in with your collections, here's a photo that may answer those questions: