Long-standing followers of the blog will be aware of The Woods, a world of Celtic folklore which Oakbound began exploring a couple of years ago. We released a free print-and-play board game, kickstarted a bunch of miniatures and always hoped to turn it into an immersive RPG. We met with a couple of small groups launching their own roleplay systems, and developed an extensive back story, bestiary and collection of art to accompany these systems, only for them to fade away before anything could go to print. 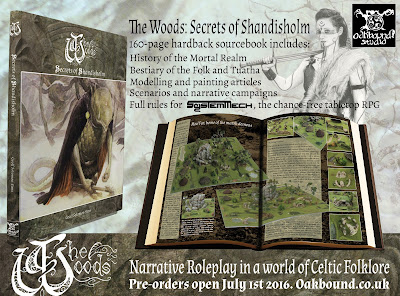 During this time we were developing a near-future dystopian sci-fi game called Factious Waste, which attendees at BOYL the last couple of years might have got beta copies of. The rules for Factious Waste had a couple of unique points, they involved no rolling of dice or drawing of cards and were geared towards manipulation of the game environment, coercion and subterfuge rather than combat- which was deterred by being particularly brutal!

Last December Oakbound attended Dragonmeet again and were surprised talking to people that were confused by why we were selling miniatures with no game system (we had The Woods kickstarter minis for sale). It had never occurred to us that there was an expectation that miniature lines should have their own game, there are so many systems out there to choose from. Nevertheless, this gave us an opportunity to combine the things we'd wanted to do, release an RPG for The Woods and develop the Factious Waste rules further. The result was we split the rules from Factious Waste, producing something we called SystemMech, a plug-and-play system ready to insert into any world you chose. 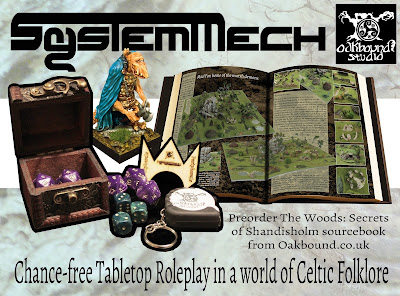 To make it work in a fantasy setting we had to revise and expand the close combat system, FW had been very shooty. The excellent Chris Cale from Tied to a Kite games brought his dark age re-enactment expertise to our aid and I'm happy that what we have now is a fairly convincing (as convincing as possible in the limitations of a tabletop miniatures game) recreation of the aspects of ancient combat. We also designed 'Fateweaver' (as close to magic as The Woods gets) actions and a host of skills, equipment and traits for the world of The Woods. 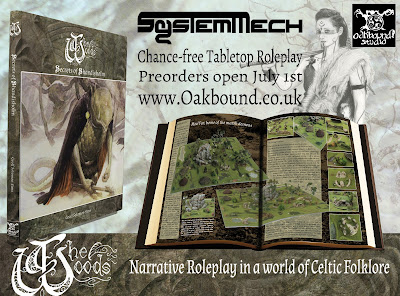 After 6 months of playtesting, writing, editing, layouts, test prints etc. the book, Secrets of Shandisholm, the first sourcebook for SystemMech is now at the printers and preorders will be opening very soon. We had some amazing help pulling this together. Gripping Beast, Warlord Games, Foundry and Dark Sword let us use their miniatures, Woodland Scenics supported the terrain building, Dave Stafford (aka Mr Saturday) painted miniatures and wrote a tutorial for the modelling section. Some excellent artists have also lent their talents to the publication, the book boasts some amazing pencil drawings from Solly Solomon, inkwork from Geoff Davis and amazingly a front cover donated by the one and only Alan Lee! This has truly been a collaborative project and I think the results speak for themselves... I can't wait to see it in print! Nervous, but excited! 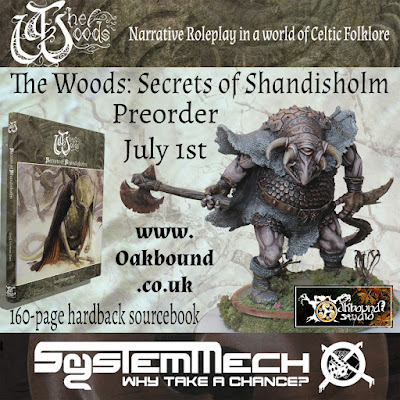